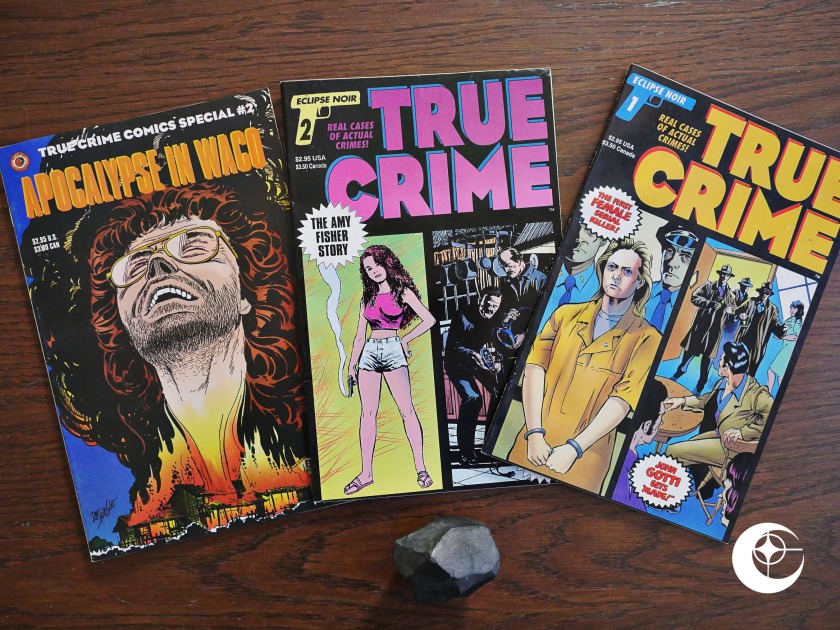 None of the series Eclipse launched in 1992 survived into 1993. True Crime is the only new series Eclipse started in 1993, but Eclipse did distribute (and or co-publish) four new monthly series from Claypool (and a couple of graphic novels), so it’s not like they were totally devoid of comics that year.

Veteran artist Dan Spiegle draws all the stories in True Crime (and the one published special). Spiegle had been published by Eclipse before in various series written by Mark Evanier, and it’s great to see his artwork again now.

He’s such a professional, which makes a change from the artists Eclipse published in the 1992 launches. He’s great at anatomy, does clear, but not boring layouts, and just, like, does the work. The backgrounds are all there; the suits are all there.

The story being told here (John Gotti getting to be a made man) is told somewhat choppily. I can see why they’d do it that way: Have one scene that flows naturally, then jump cut to another, and then repeat. You avoid having this short, 13 page story read like a recap, but still you cover a lot of ground.

This True Crime comic is an outgrowth of Eclipse’s true crime trading cards business. Those cards had gotten a lot of press, and been banned here and there, and therefore became a lucrative business. One criticism levelled at the cards was that they glorified crime, and editor catherine ⊕ yronwode got all offended in response, of course.

But of course they did, and of course this comic does, too. Being a made man is totally cool! is what I got from this story, and being impressionable, I’m now going out to find an Irish mobster to shoot.

We also get thrilling crime facts.

Valarie Jones’ story about “THE FIRST FEMALE SERIAL KILLER” (as the cover says), Aileen Wuornos, doesn’t fare as well. Jones tries to get as many details as possible down into the book, and she does explain what happened cogently (I think; I was unfamiliar with the story), but it’s not good comics. 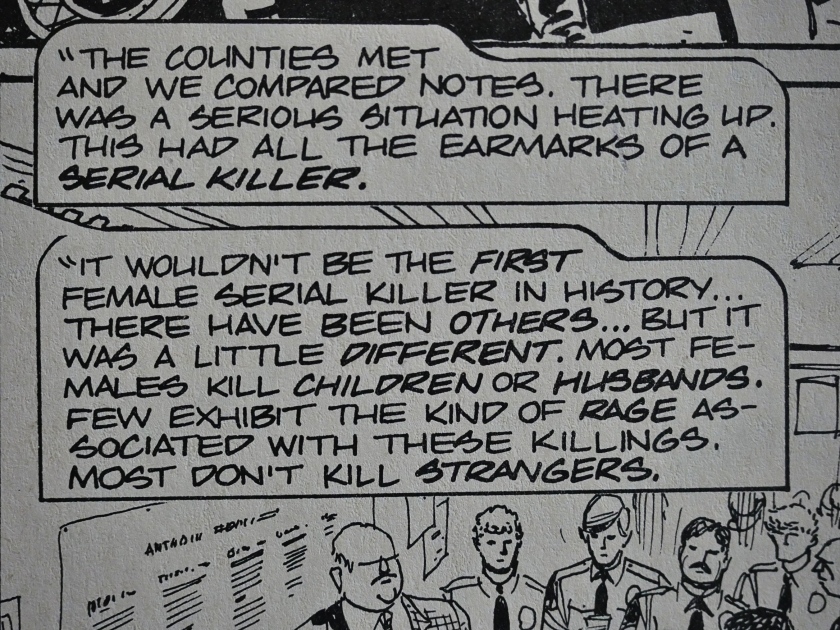 Oh, it’s not the first female serial killer in history? THE COVER LIES! WHAT A CRIME!

This is the first issue, but they had letters about the True Crime trading cards, so they run those on the letters pages. People write in with some pretty strange questions.

Wow. One of the killers they covered on a trading card, Kenneth Bianchi, the Hillside Strangler, sued Eclipse for almost $7 million, but I assume he didn’t win. Or perhaps it became a moot issue when Eclipse went bankrupt after being sued by Toren Smith for non-payment and falsifying their royalty statements.

In the second issue, Proctor and Robinson once again cover the Mafia, but this time from the point of view of a couple of cops.

They plant a bug in a house. The end.

It’s not a very thrilling story.

The second story is by Valarie Jones again, about Amy Fisher, who I had actually heard about, but knew nothing. And again, it’s overflowing with data.

And then we get two text pages about Fisher, or rather about Fisher’s portrayal in the media.

Wow. By 1993, Eclipse Comics really were more of a card selling business than a comics publisher, weren’t they?

Wut? I don’t have that comic! I only have True Crime Special #2, which is about those wacky Waco Branch Davidians. What happened to the George Reeves special? Where we’re going to learn who killed him? (Did somebody kill him?) DID I MISS ANOTHER BOOK!? 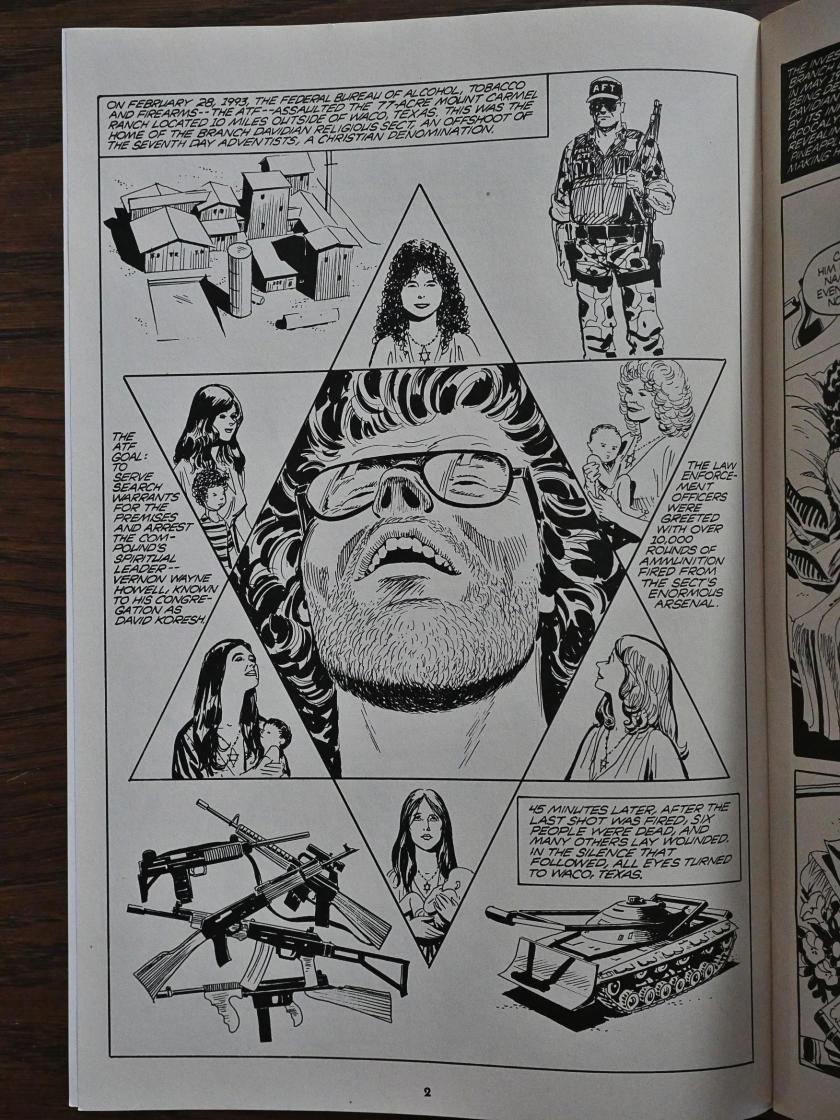 Anyway, this is written by Proctor and Robinson and imaginatively illustrated by Spiegle. This time they have 26 pages to do the story, but instead of letting it breathe, they really want to get a lot of details in. But it’s weird how fast they managed to get this published. The Waco thing wasn’t over until April 1993, and the indicia says that this was published in August 1993. That sounds really fast. Perhaps too fast, and the indicia is just, like wrong… 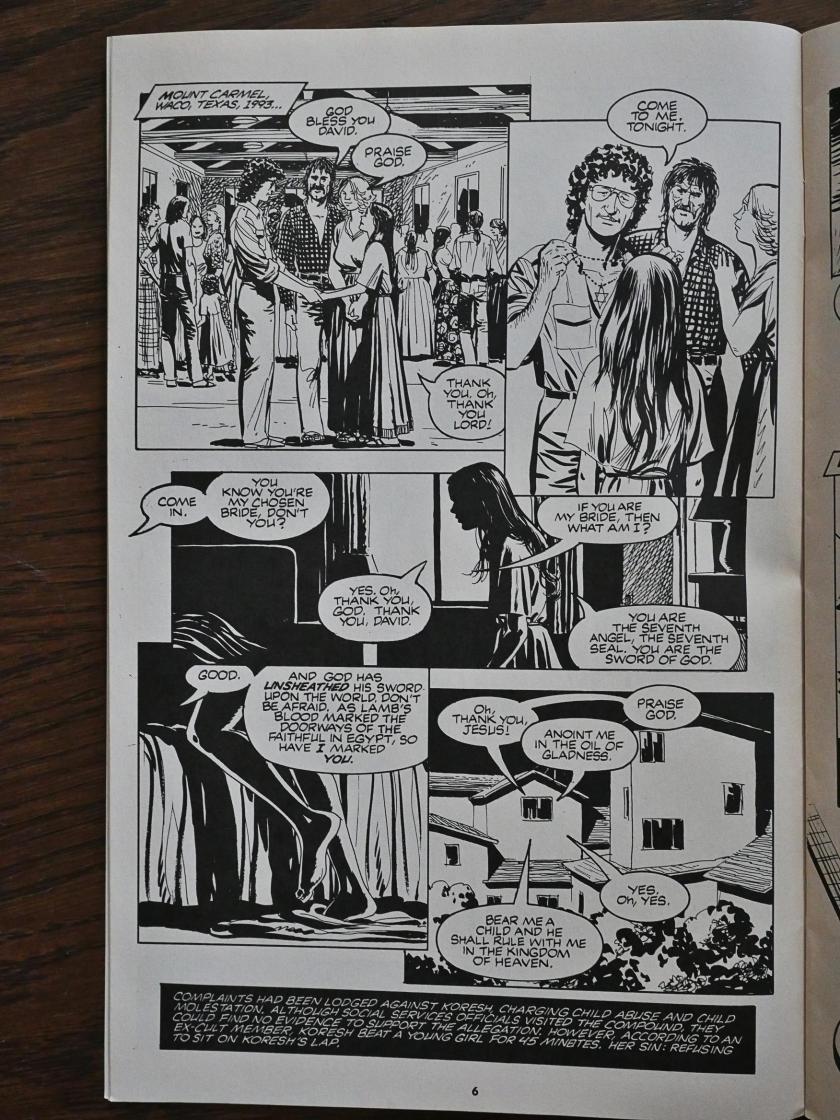 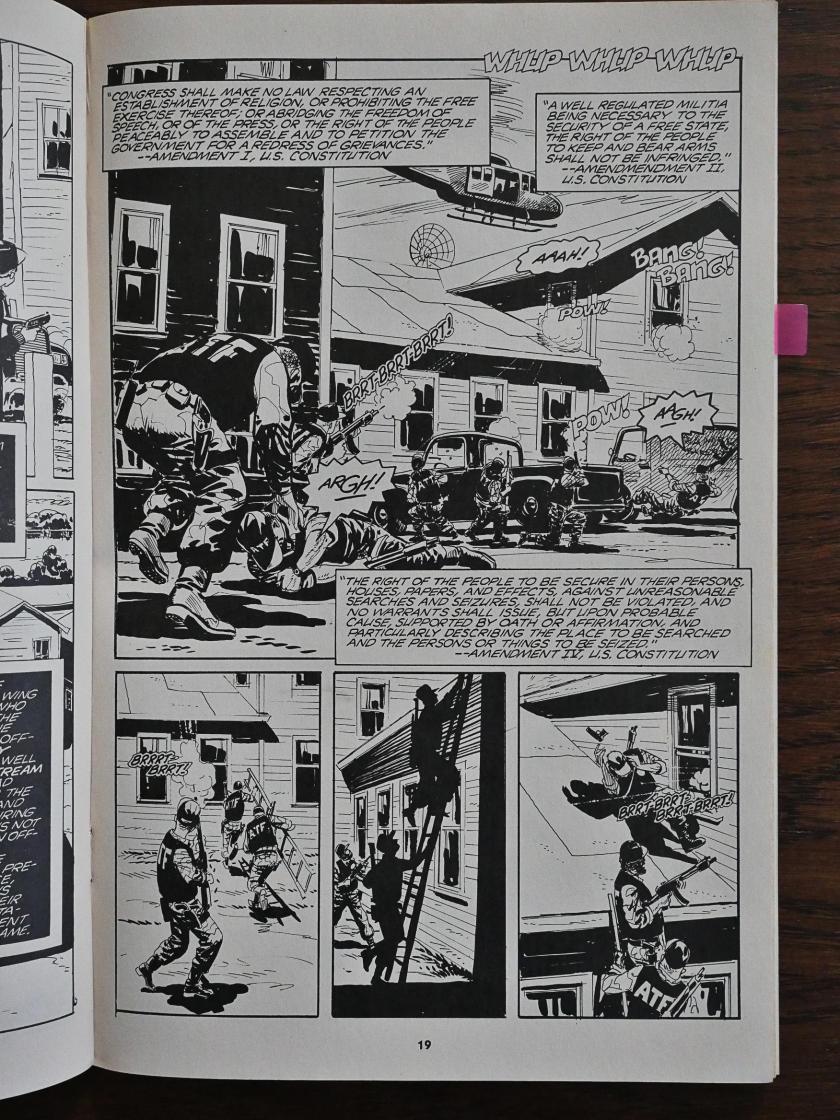 But the authors don’t seem to hold the ATF in very high regard, either. 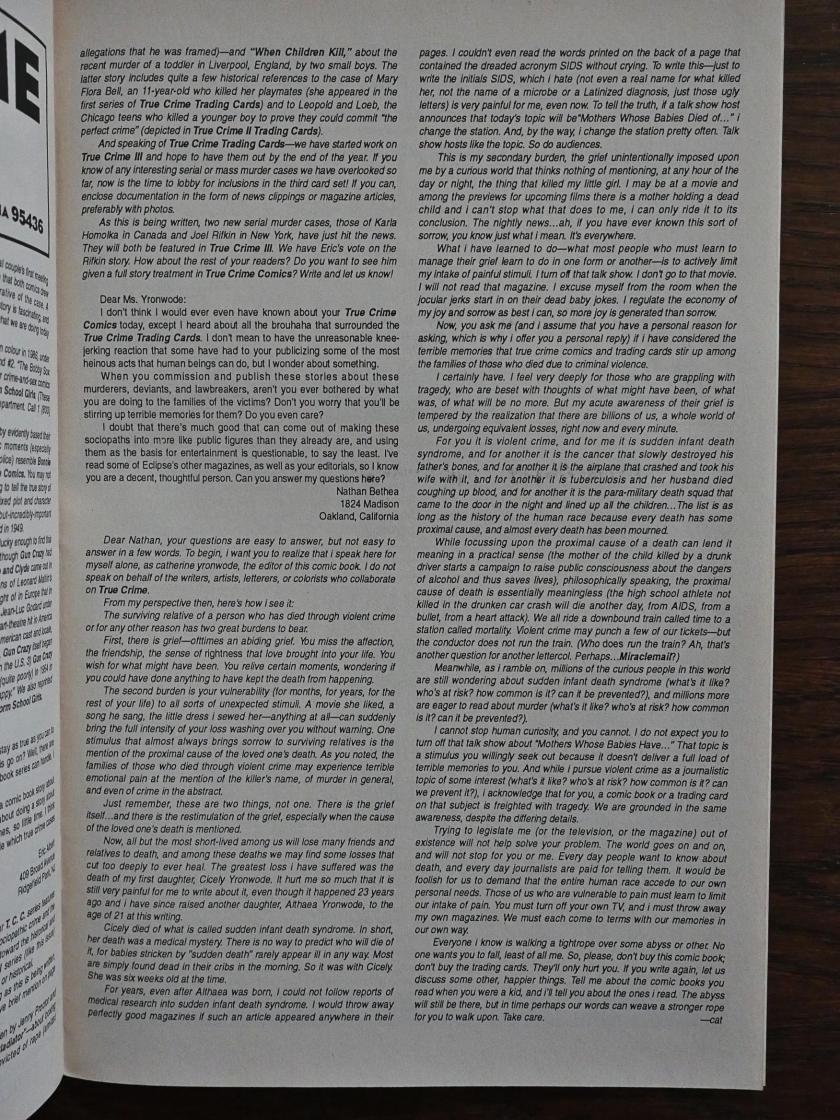 A reader asks why Eclipse is publishing all these things, and yronwode responds with a personal story about losing her firstborn child. And then, after making a somewhat convincing argument, she says: “Trying to legislate me (or the television, or the magazine) out of existence will not help solve your problem.”

That’s a very nice straw man argument you’ve got there. It’d be a shame if something… were to happen to it.

But let’s get researching about that Reeves comic.

Oh! It was never published:

The idea was to produce the George Reeves story in color, a deviation from the normal B&W comic books this line was noted for. According to Cat Yronwode the one and only way to treat George Reeves with the highest respect was to produce the issue in color. However, in order to break even on the project Ms. Yronwode required a minimum 16,000 copy commitment from the distributor before going to print.

July 16, 1993 issue of CBG announced Eclipse Books had indeed reached the break even point of 16,000 copies due to the phenomenal response of caring fans and retailers. It also announced a colorist was currently hard at work on the project and the book would ship in time for the San Diego Comic Book Convention in August.

But then Eclipse went bankrupt before they had a chance to publish it. They even had Neal Adams doing the cover.

It’s never been published, apparently, and these comics have never been reprinted.