I remember Reid Fleming being a kind of small sensation in some circles back in the 80s. It was a cult that rather reminded me of the hubbub surrounding Bob Burden’s Flaming Carrot comics, and left me almost as cold as a teenager.

I had the self-published first version of the Reid Fleming book, as well as the first version of Heart Break Comics, and that’s where I stopped: I never continued reading it went it went “mainstream” at Eclipse. 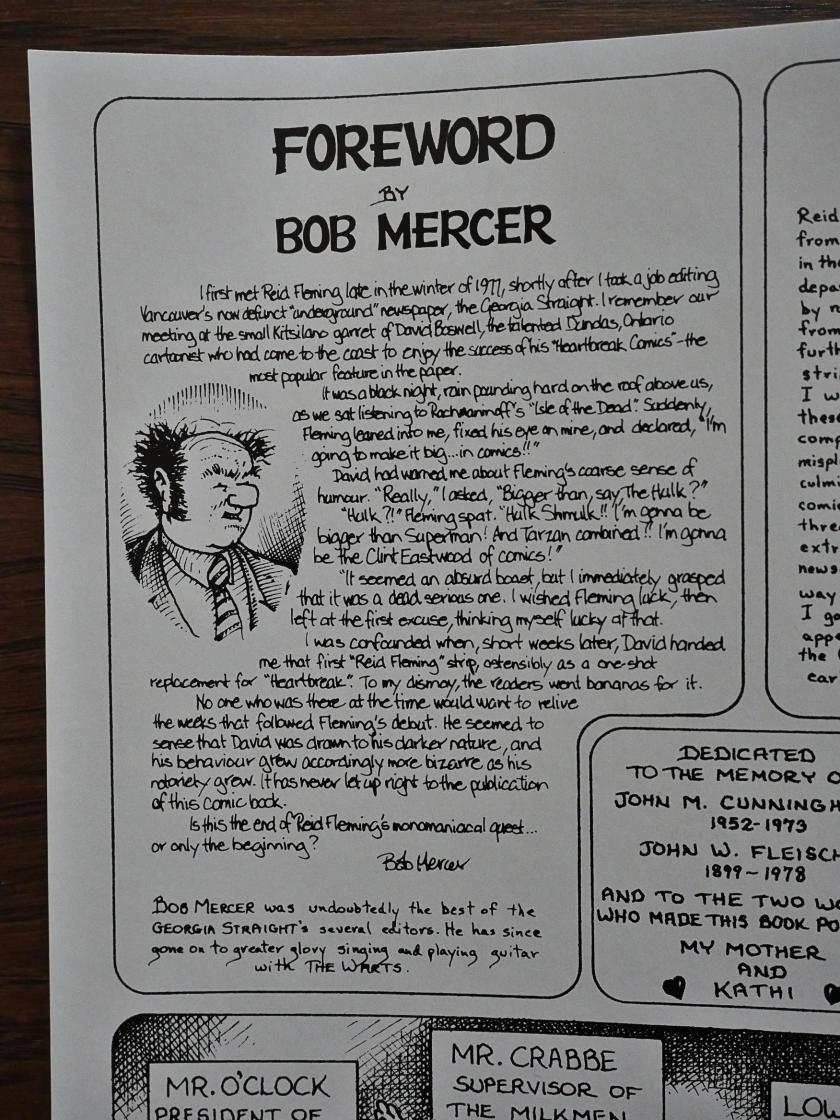 Both Heart Break and Reid Fleming have their origins as a full-page weekly strip in the underground Georgia Straight newspaper. Reid Fleming was meant as a one-off, but got a rabid fan reaction. (According to Boswell, the reaction was from a group of friends who made a lot of noise; a very small cult.)

The first issue is magazine size, and reprints the 1980 self-published first issue. It’s a mixture of new (i.e., from 1980) longer stories and one-page reprints.

The page up there pretty much sums up the initial approach: Reid Fleming is an agent of chaos, violence and absurdity, and you’re either on board with that or you’re not. As a teenager I wasn’t: I found the Three Stoogieness of its humour to be tedious. But not as tedious as I found Flaming Carrot, which basically utilises the same idea.

I’m not so sure now? I appreciate the attractive stiffness of the artwork and the obsessive hatching and the weird hairdos more now, and even if there are a lot of jokes like this that I think don’t quite land, it’s an amusing read. 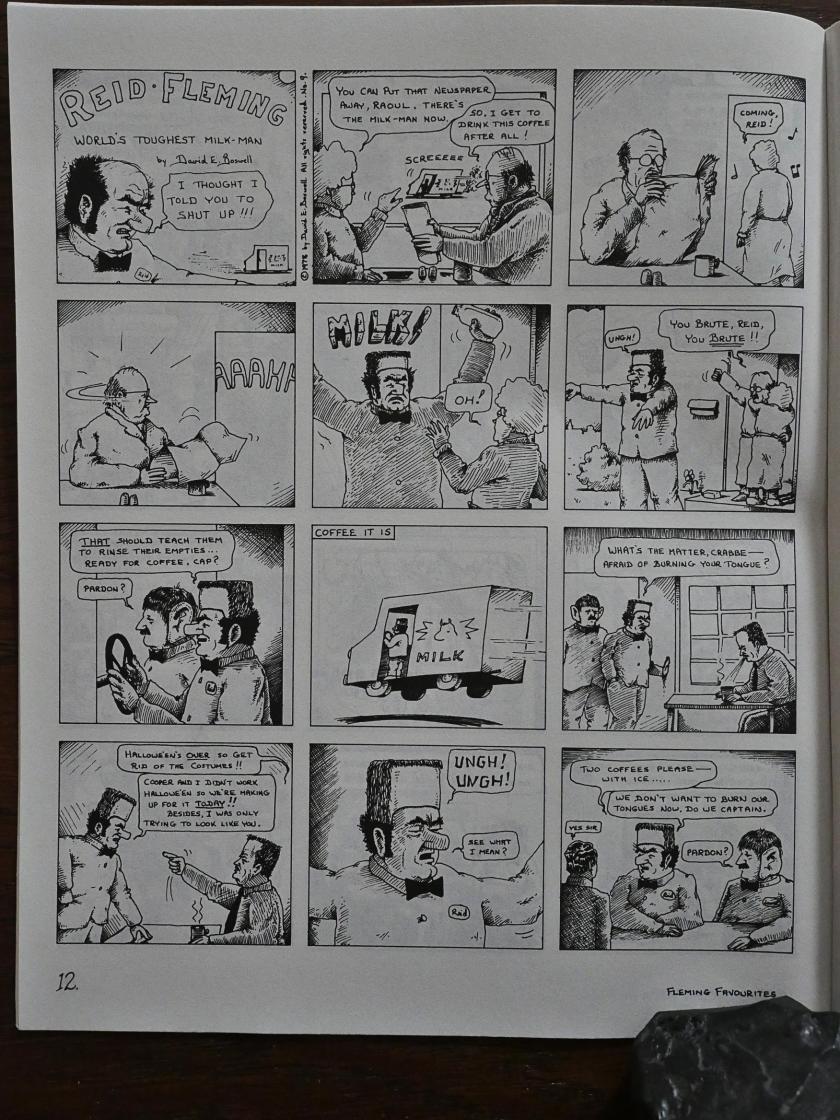 This is the first of the “old” strips (i.e., reprints from the newspaper), and the artwork is scratchier. The humour is basically the same.

“Bores? Why —” (I oughtta.) There’s a lot of early-30s screwball comedy in Reid Fleming, but I just wanted to mention the hatching (cross and non) again. It’s a really organic look despite all those straightish lines. I’m a sucker for texture.

The running joke throughout the series is that Fleming is a fanatic fan of a daytime soap that features a guy in a coma. And he’s been that way for five years.

The edition of the first issue that I have is the fifth printing, which must mean that Reid Fleming was a commercial success in addition to being a critical darling. And this also means merchandising: There are buttons, t-shirts and posters. 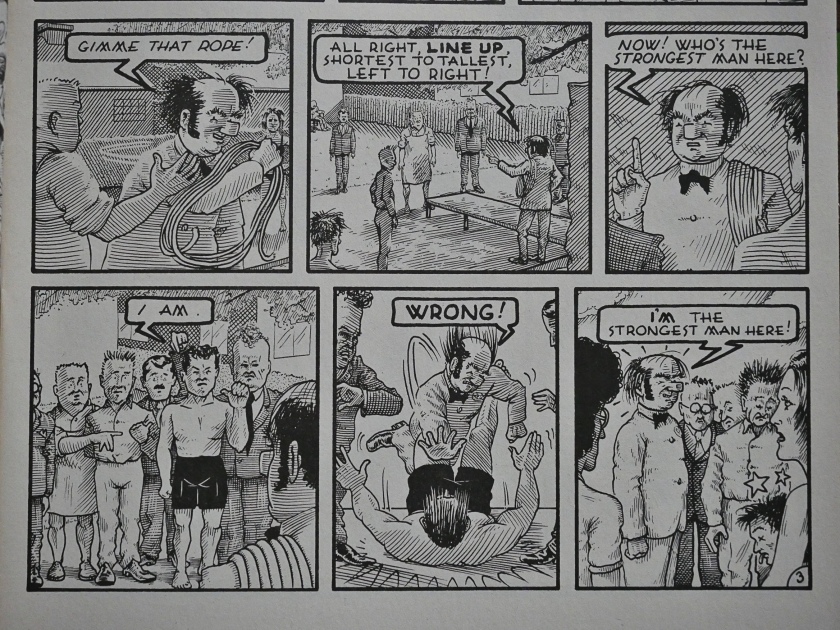 The next first issue from Eclipse is in normal American comics size, and promises a five-part story. I hadn’t read these before, and was curious as to how Boswell would develop the story.

… but the jokes are more Zippy-like now: More non-sequitur than insult, even though this is a bit of both. 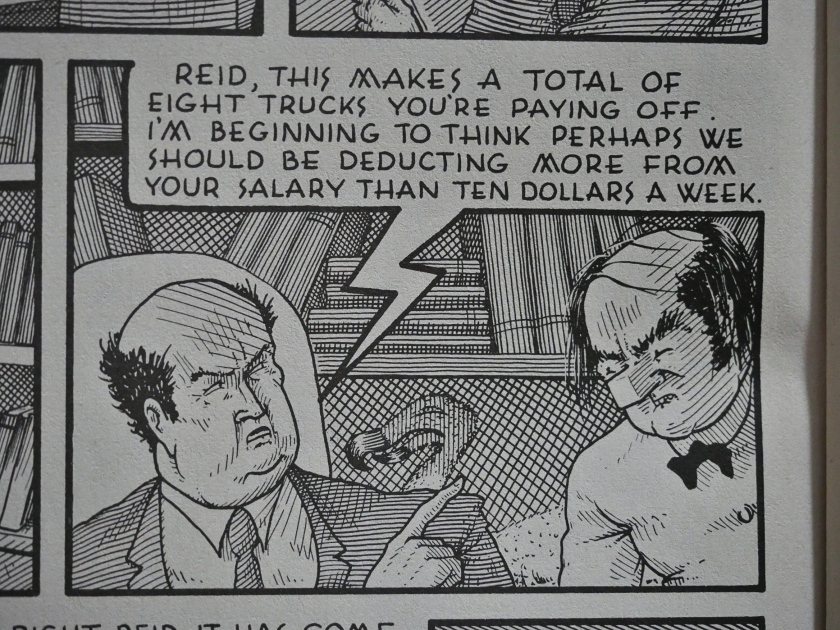 But it has a real kind of plot, and it feels like Boswell was thinking about the thing more as a movie than a comic book. And I don’t mean that as a compliment: Movie scripts instantiated as comics are usually not great comics.

I found myself thinking “so that’s the end of the first act” some pages later.

Apparently Reid Fleming was a hit with the college crowd.

To no great surprise, Boswell lets us know that he’s really fond of pre-Code Hollywood cinema.

Now my plan to read all Eclipse comics is a complete failure! And I won’t know what happened in the fourth chapter! 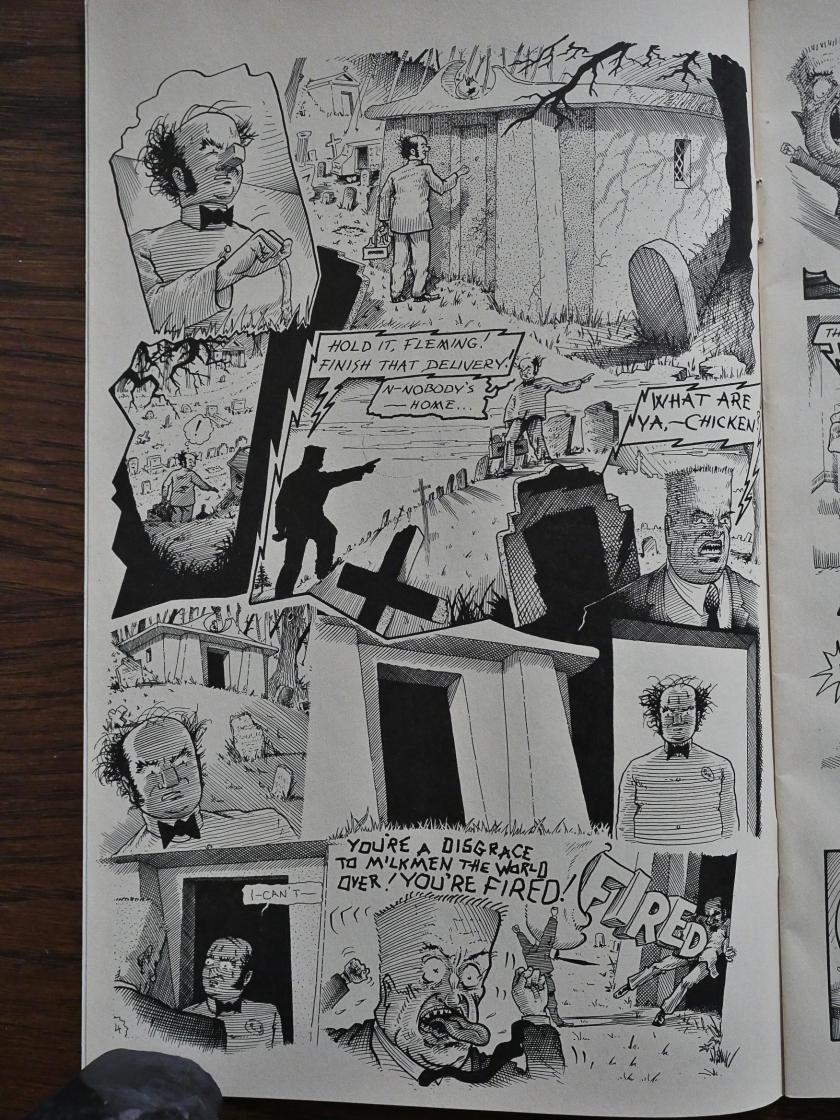 But, anyway, as the series progresses, it gets even more movie-like. Here’s a dream montage sequence. 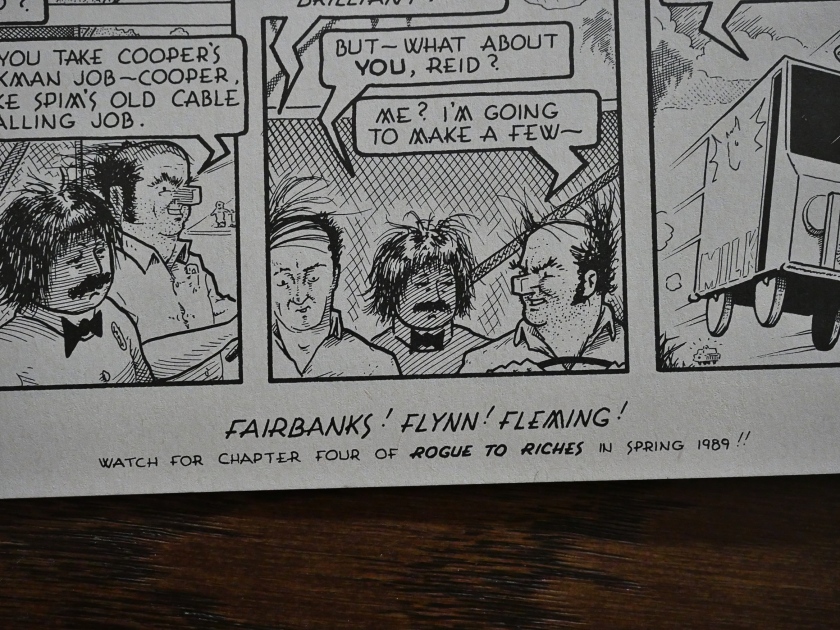 The series started in 1986 and the final issue was published in 1990. That averages around one issue per year. 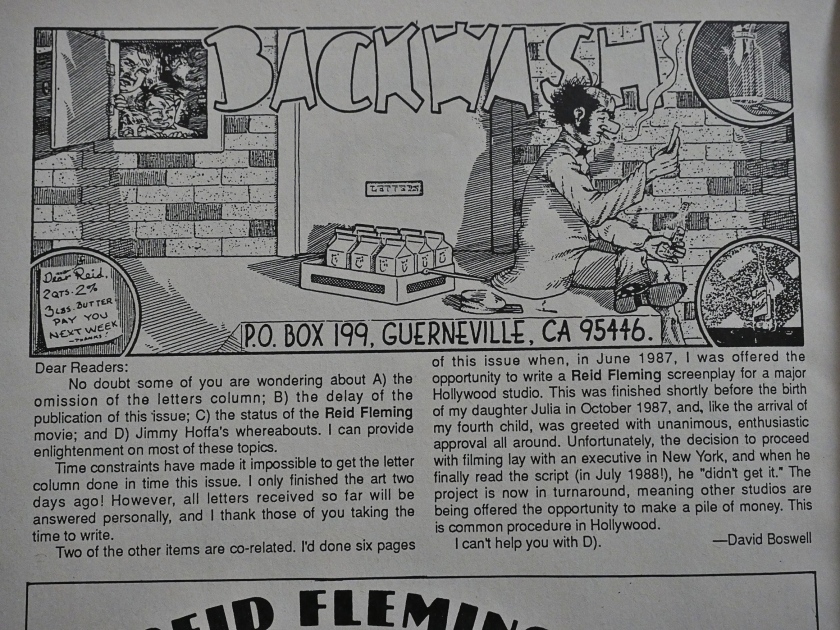 Boswell explains why: He’d been writing a screenplay for a major Hollywood studio, but the movie never happened.

I didn’t think that Boswell was going to be able to wrap up the storyline in any sensible way, but he tied everything up very neatly in the end. In a very Hollywood way.

While Reid Fleming was in constant delays, Eclipse decided to reprint Heart Break Comics in a very shiny comics album:

It seems like it’s basically a facsimile edition, and includes the introduction from the previous edition:

Boswell’s artwork developed quite a bit from the mid-70s style above to:

This, which is from the early 80s (so before the new Reid Fleming series).

It’s drawn in a very thin-line glamorous way: Constance up there looks very much like a 20s movie starlet. It’s really pretty.

Storywise, it’s a bit one note. The protagonist of this story is Lazlo, Slavic Lover, but he seems a lot like Reid Fleming. He’s not as random and deranged, but he’s also a hard fighting and drinking man. 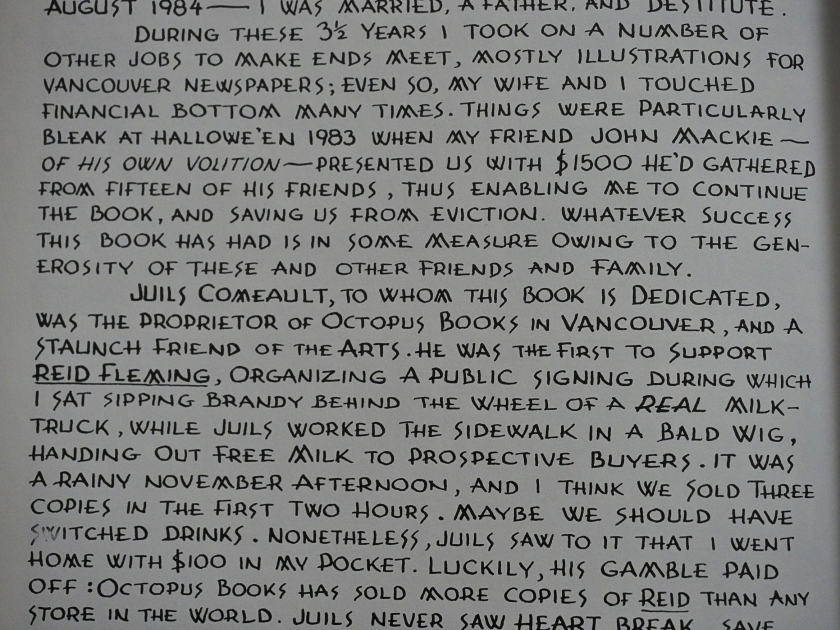 Boswell explains how he was able to complete Heart Break Comics by getting financed by his friends. The early-80s version of Kickstarter, I guess.

The album is rounded out by some sketches… I don’t recall these being in the first edition of the book? On the other hand, would I?

I don’t mean to sound as down on these comics as I undoubtedly sound, because I did like reading them. The artwork’s fun; the action is absurd; the story is satisfying. I just don’t quite connect to it.

Harvey Pekar in The Comics Journal 117:

On the basis Of his first two books, Reid Fleming, Wbdd’s Toughest Mikman and Heartbreak Comics, David Boswell has established himself as one of the leading comic book creators to have emerged in the past decade. He’s not only a very good writer, but an illustrator who transcends certain technical limitations with his originality and intelligence.

with Reid Fleming, World’s Toughest Milkman, the Canadian cartoonist David E. Boswell may have created the comics hero of the ’80s. Published in 1980 (and having its origins in a weekly Canadian newspaper strip from the late ’70s), Reid Fleming is the story of a pugnacious working-class hero who, through the use of both his wits and his fists, does daily battle with the various obstacles of the workaday world. It is also a true rarity among contemporary comics—a laugh-out-loud funny book With jokes and characterizations that improve with every reading.

Monaco, again, in The Comics Journal 103:

Beginning With the best, in Heartbreak Comics cartoonist David Boswell has done the impossible: he took the sky-high expecrations built up by his earlier Reid Fleming, the World’s Toughest Milkman and surpassed them. In his first book in almost four years (and in only his second book, period) Boswell has created a full-length work that easily compares against the all-time best of the undergrounds, and makes a jaded old comics snob like me feel so elated that he has to suppress the urge to make rash statements such as “the Thimble Theater of the ’80s.”

Boswell is a preposterously funny cartoonist. His intuition for grotesquery is highly refined, and his grasp of the primordial baseness of his central character is complete. (The assumption that there is a Reid Fleming in each Of us is implicit.) Boswell has created an unforgettable comic archetype, an inarticulate, violent, rampaging brute whose capacity for emotional involvement begins and ends with the tube. Reid feels trapped by life (“HOW many Mondays can there be in a man’s life?”) and he fears the inevitable abproach of death. He vents his existential panic in a succession of gratuitous acts of violence and expresses his outrage in the abrasive poetry of abuse and derision (“Get outta that stream, asshole! You’re killin’ the fish!”). Yet despite his anguish and ennui, he clings—absurdly yet touchingly—to his milk truck.

A similar treat is David Boswell’s incredible Reid Fleming. Don Thompson plumbed the depths Of illogic when he gave this book an “F” because the hero is a rude, ill-mannered bully. That is correct. One might as well say that the heroine of Elektra was a vicious, mind-bogglingly amoral assassin. So what, in both cases. Is that supposed to be an esthetic value judgment or something? Gimme a break.

If there’s a problem here, it’s that maybe it’s a little too strange and unworldly. Fleming is fascinating, but not really involving.

That is the most negative thing I can find anybody said about Reid Fleming. I mean, having Don Thompson giving you an “F” is perhaps the highest honour a comic could get in the 80s, but MacDonald’s “not really involving” is something I agree with.

Reid Fleming has been released in a collected edition from IDW in 2011.