How odd. Eclipse had just started co-publishing a European action/adventure magazine anthology a couple of months earlier. That one was called Aces, and was lovingly compiled by the Brits over at Acme Comics. It was impeccably curated, with interesting biographies of the artists involved and news from the Continent. It was obviously passion project for the editor, and then Eclipse goes into direct competition with that with Merchants of Death, dubbed “The Best In Adventure From Europe And The Americas”.

Perhaps the idea was to create more of a presence in the comic store by trying to establish a “new corner for these things”. It was a successful strategy with the Japanese imprints, which Eclipse launched three of at the same time, and became A Thing.

These are 40 page magazines, printed on thick, non-glossy paper, and feel pretty substantial. However, the contents are everything but.

While Aces had some pretty big names doing exciting strips, here we get people that typically end up in cheap, nondescript anthologies aimed at teenage boys in Europe. Carlos Trillo and Jose Luis Salinas doing random 12 page stories about war and stuff. Salinas is a good artist, but these stories don’t have much meat on them. And the reproduction isn’t very good; Salinas’ very Spanish very thin-lined and messy artwork just doesn’t show up much of the time.

I was excited when I read the indicia which mentioned Alberto Breccia. But it was Alberto Breccia jr. and “A. Grassi”. Jr? And that’s definitely not an Alberto Breccia page, and the credits say Enrique Breccia, so perhaps it’s a relative? A son? It’s not particularly thrilling, and I wonder why Eclipse coloured his pages in this magazine and no others. The price tag ($3.50) was pretty steep for its time, but…

The stories are very hard-boiled: The guy takes assignment after assignment from people who turn out to be villains, and then he has to shoot them. As one does.

But it’s the best stuff in here. 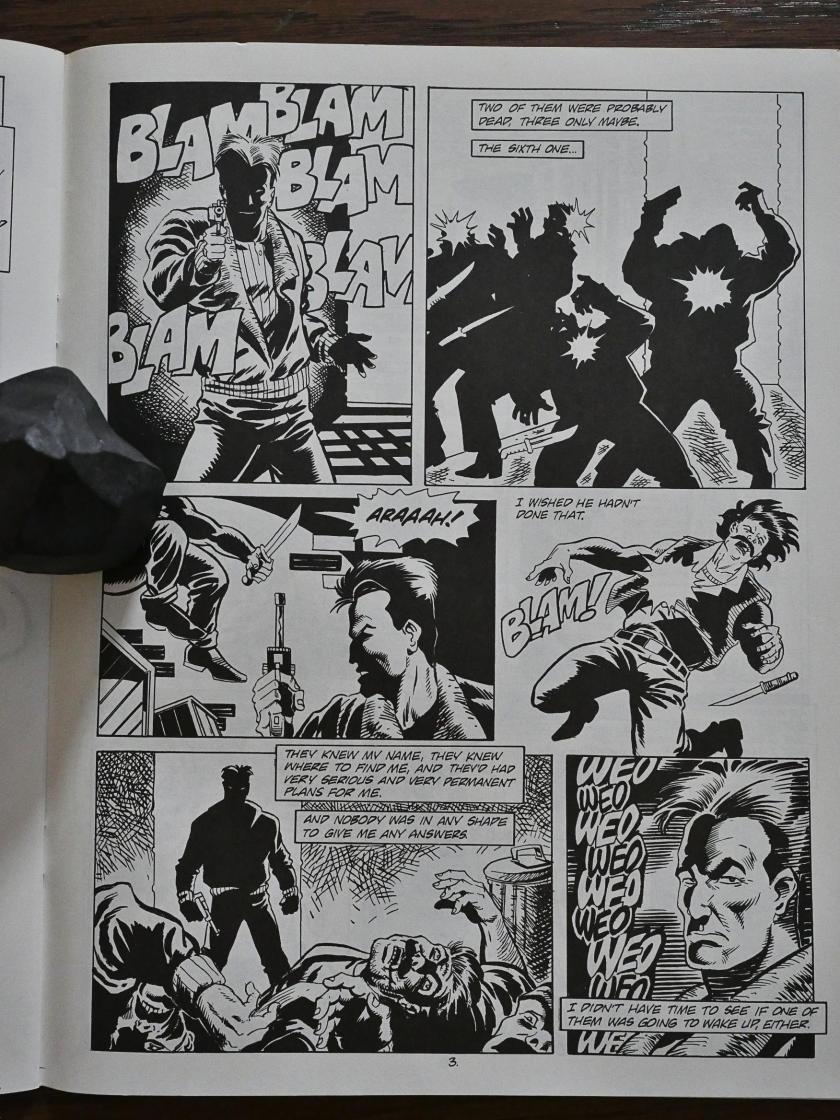 And last and least, we have a continuing serial from Kurt Busiek, Dan Brereton and Richard Howell. It’s about a mercenary who doesn’t take money because of reasons, and it’s pretty ineptly drawn.

It’s a not a pleasant thing to read, even if the story isn’t as bad as you’d expect just by looking at the pages. There aren’t too many stories about the King of Roumania. 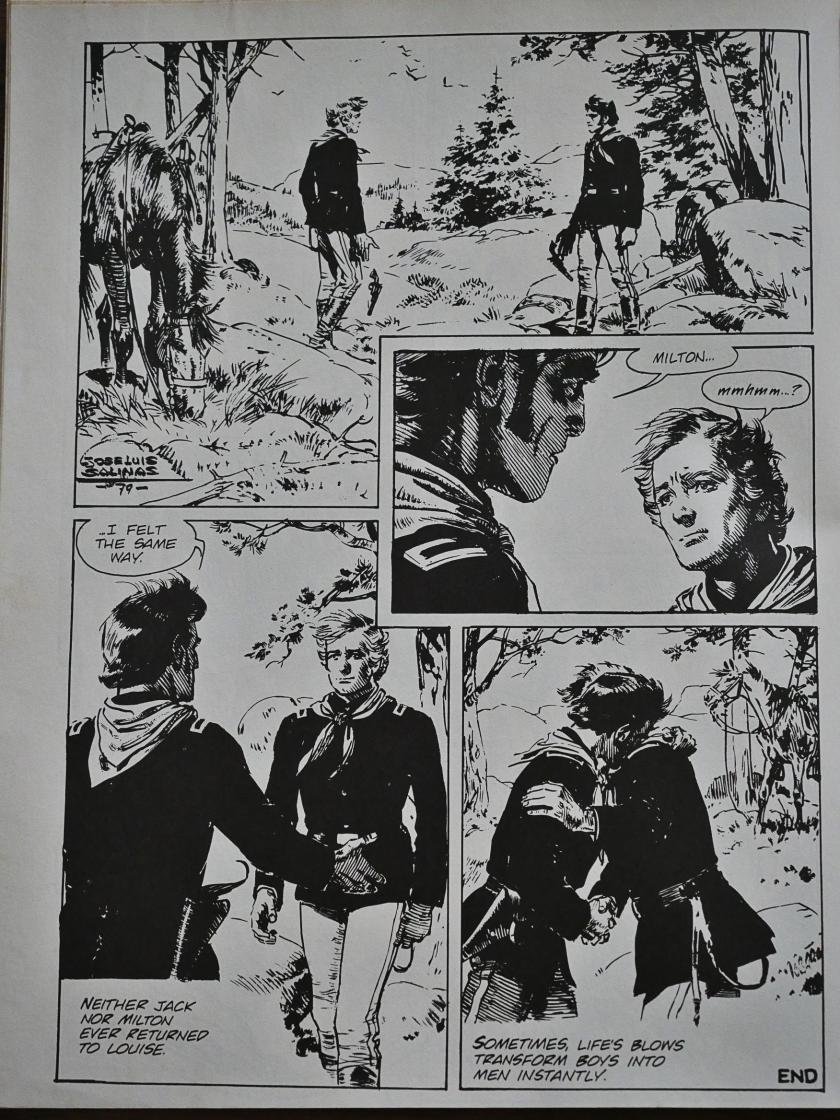 The first two Trillo stories revolve around people coming to the realisation that violence is like bad.

The last two are about how awesome it is to be in the Foreign Legion and killing people. 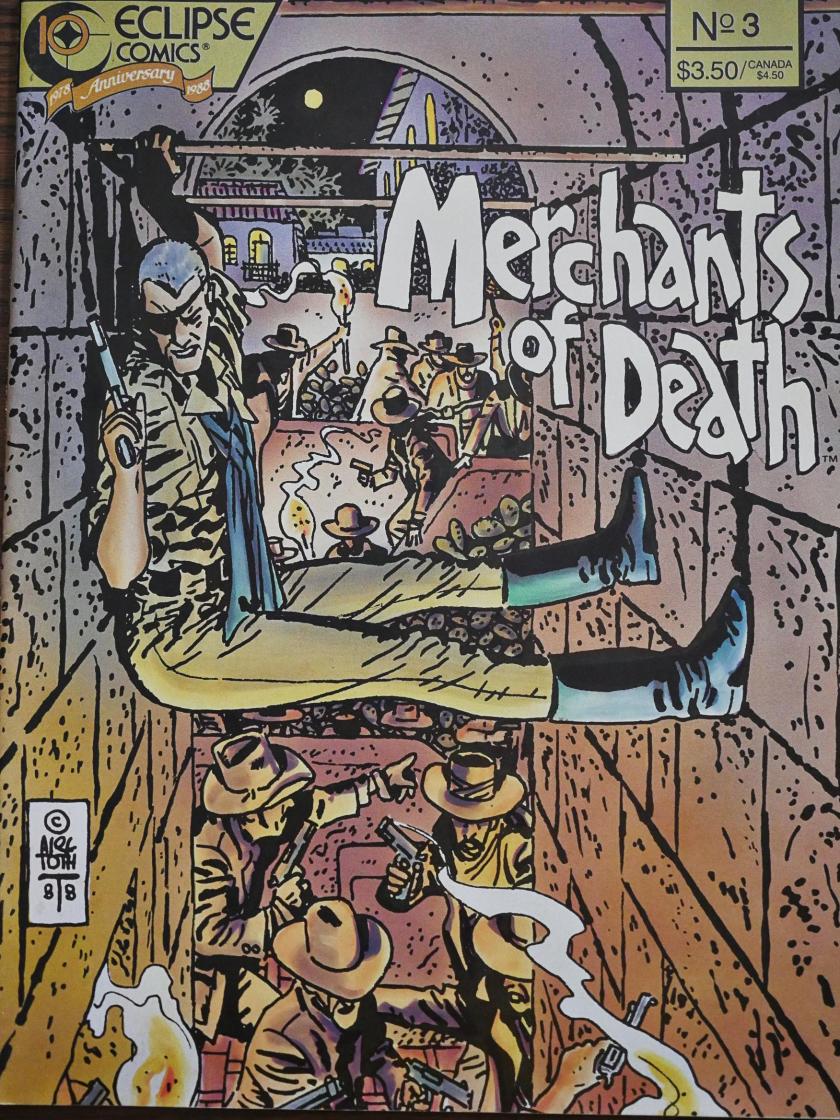 OK, this is the best bit in the series: This cover by Alex Toth. Eclipse had just published his Zorro collection, and they somehow managed to wrangle him into providing some covers to this anthology, too.

Enrique Breccia’s faces are just so absurd. That guy walks around making that face all the time, and the other people have gigantic cartoonish noses. I mean, I like it, but it’s so weird. 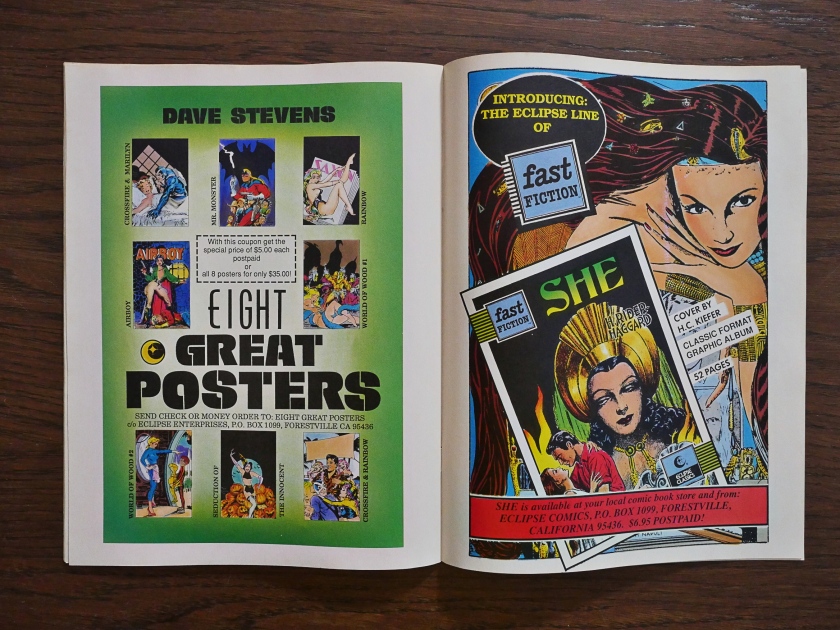 So what is this thing? It’s two random reprints of European properties that I would guess could be picked up for nothing. It’s not “the best” as the cover proclaimed; it’s what you get when you write to a Spanish comics agent and say “send over whatever you have lying in the closest cupboard”.

Adding to the feeling of being taken for a ride are the sheer number of in-house ads: Up to ten pages per issue. Why print it as a 40 page package if you’re going to do that, anyway? Why not use some of those pages to give the European reprints some context? There’s absolutely no text in these issues to say where these pieces originally run, either, but that’s a typical Eclipse thing to do.

The final issue concludes the Mark Waid Romanian thing by giving it some extra pages (leaving room for fewer ads), and it’s not a bad way to finish off the story.

If I were the Acme Press people, I would have been livid with Eclipse for trying to pair off this substandard series with their excellent Aces series as a “sister” anthology. (The co-publishing deal Eclipse had with Viz and Proteus also soured, so it would be typical.)

And as both anthologies were cancelled around the same time, I guess this strategy didn’t pay off for Eclipse, either.