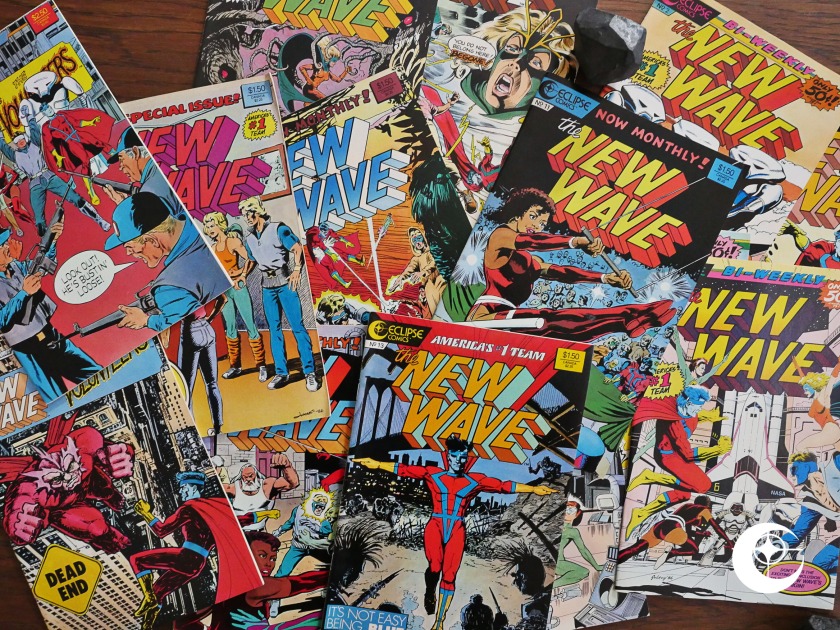 Here’s the thing: When writing about not-particularly good thirty year old comics, the entire project can get to seem a bit deranged. Who cares whether somebody once published some comics that weren’t very good? Raking the comics over the coal just seems petty, right?

Be nice, you know?

But on the other hand, bad comics can be interesting to talk about, too. 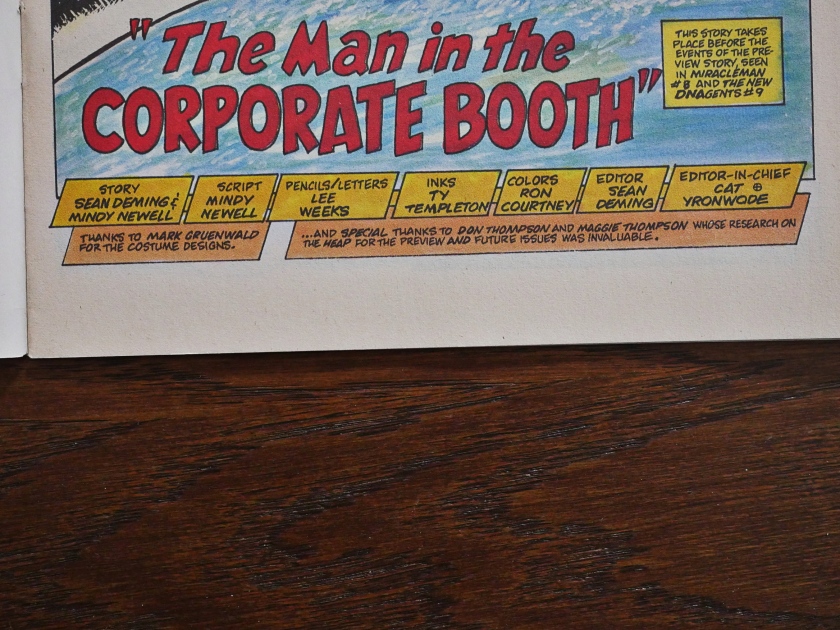 It’s clear that The New Wave is no labour of love for anybody involved. It seems like a book generated by somebody who thought that having a super-hero team would bring in the moolah, so you have this rather long list of creators of no great notability, and the editor is credited as the co-writer. But, hey, Ty Templeton? So at least the inking will be super sharp. 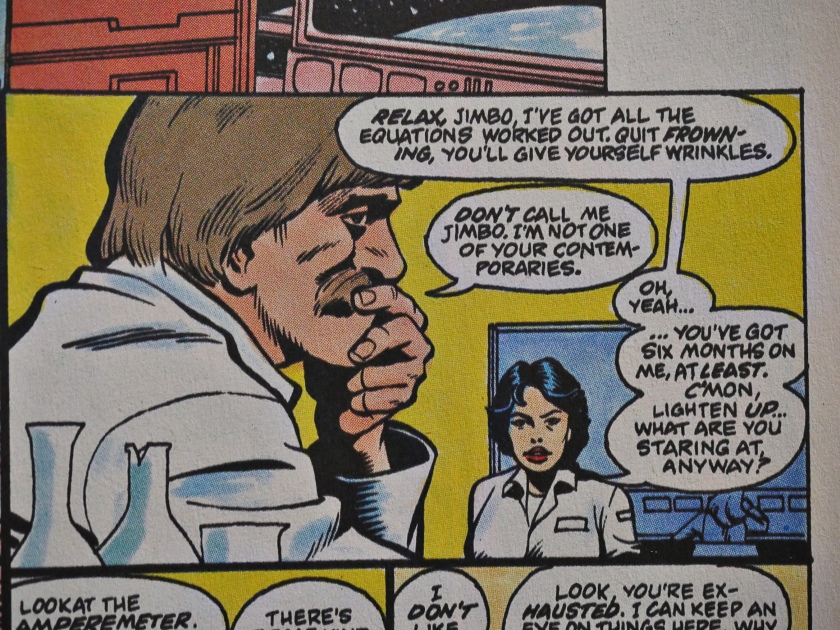 There’s an incredible amount of drama in the first few issues. There’s torrents of speech bubbles, all filled with pointless and unfunny quarreling. 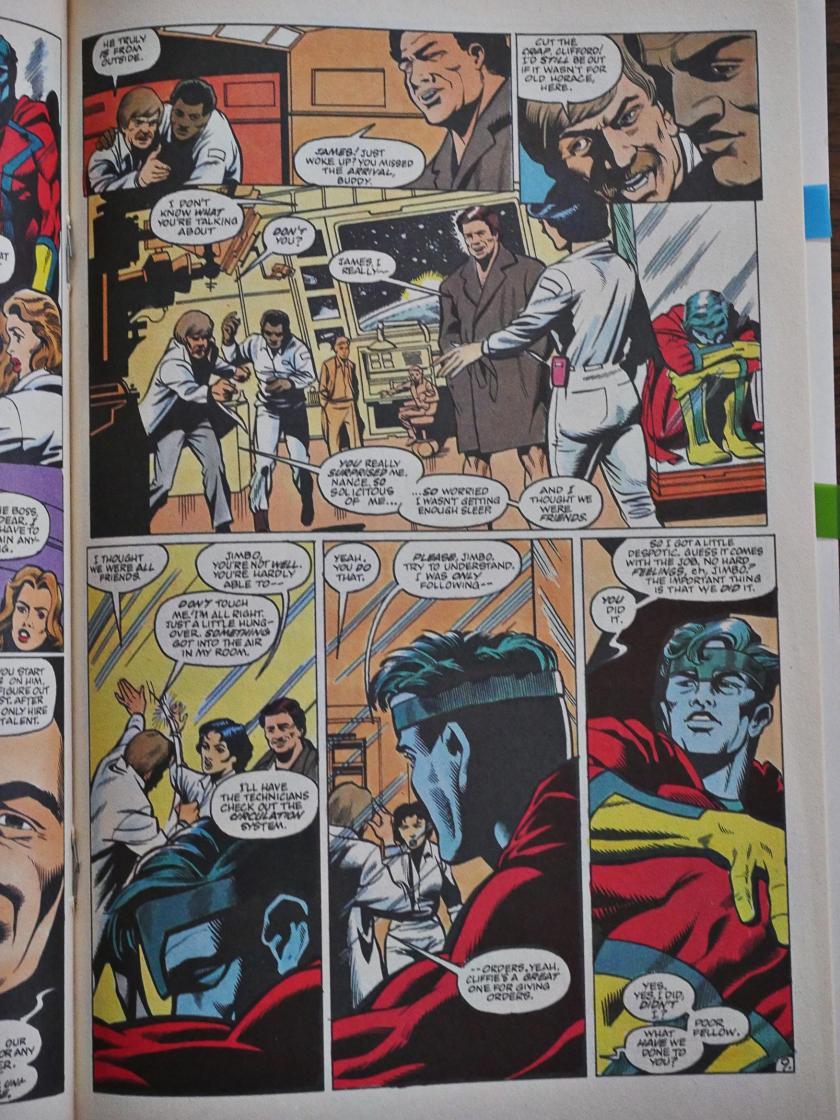 This is the basic mode of the book: People stand around shouting at each other while not much of possible interest to anybody is achieved.

But Templeton’s inks are, indeed, pretty sharp. Even if the facial features morph and change from panel to panel. 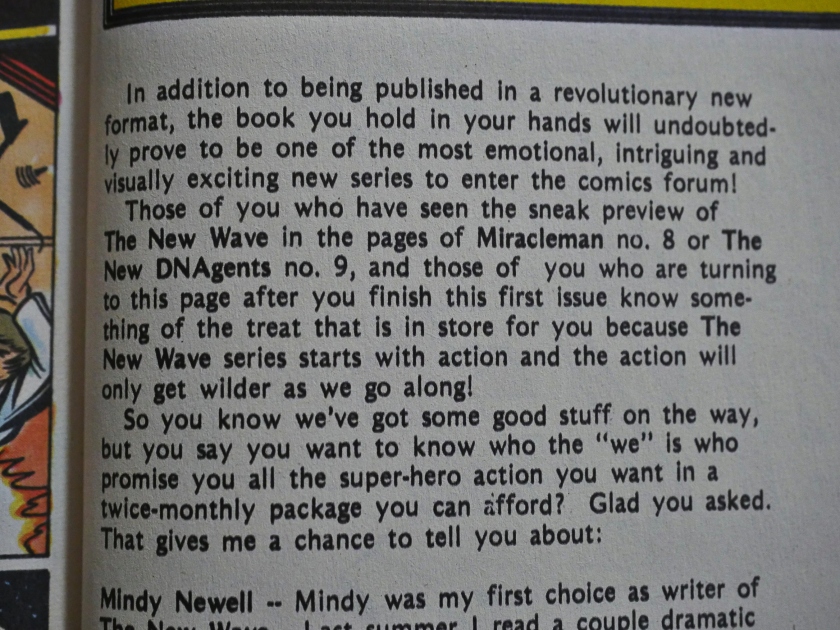 Deming reminds us that a preview of the series had already been printed in Miracleman and The New DNAgents. It was even worse than the book proper is. 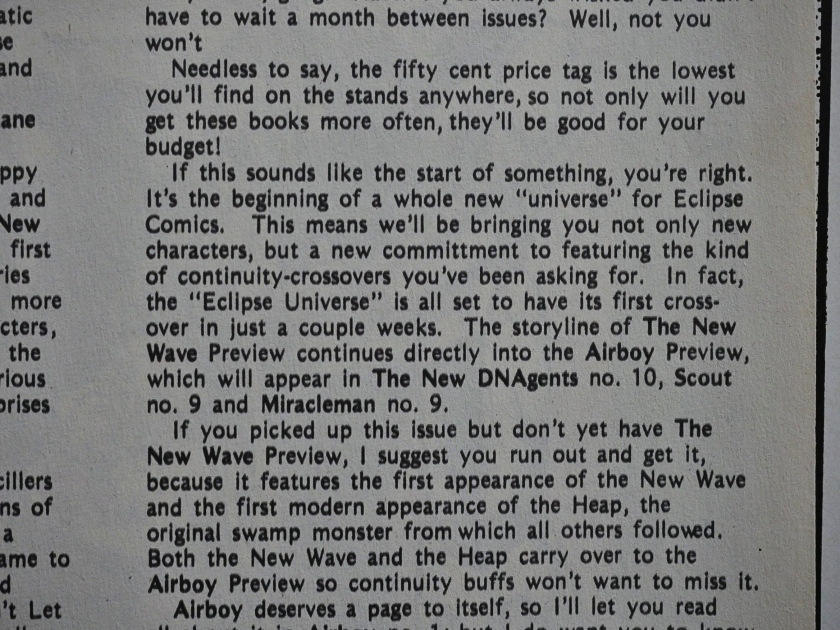 And Deming is pushing the idea that there’ll be an “Eclipse Universe” with crossovers and fun, but I think that perhaps The New Wave was mostly left out. 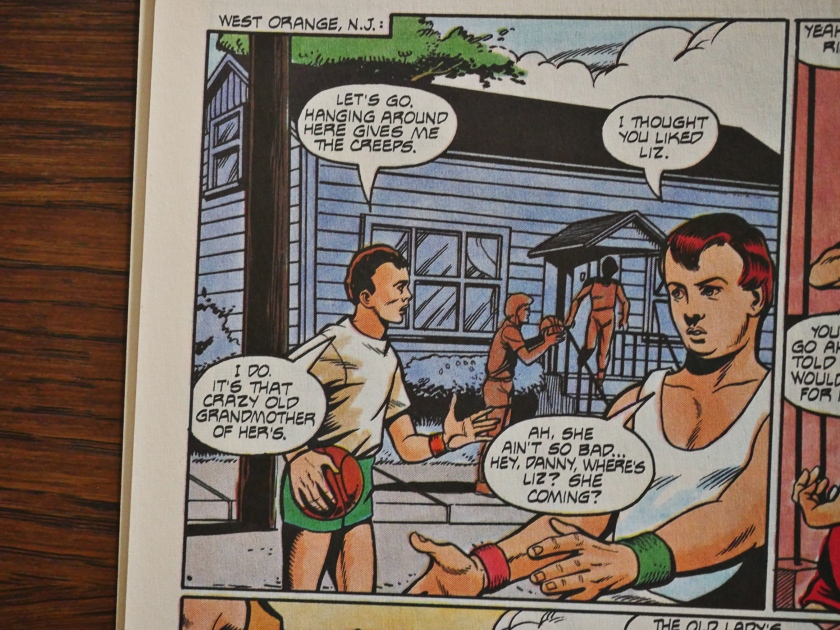 But what I wanted to mention here is how the speech balloons are placed. It’s really consistent; you always read from the top to the bottom. In this panel that works quite well, because the first balloon is to the right, so you can ping-pong back and forth and get the dialogue. But in too many panels, the leading utterance is the balloon to the left, so you have to use a ruler to determine which balloon is slightly higher than the other to get the right sequence, and it’s totally annoying. 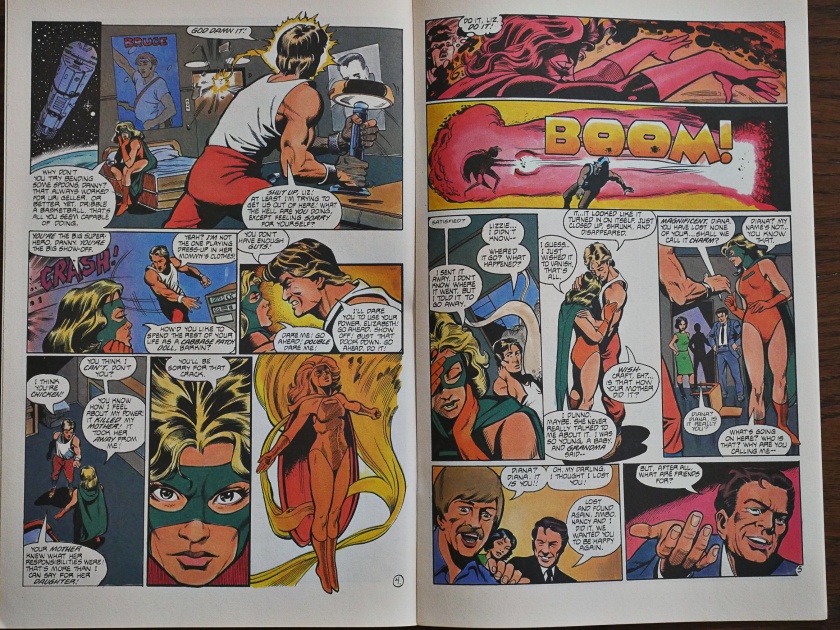 In addition, it’s often just unclear what they’re doing. Did you get that what she did was opening the door at the first reading? 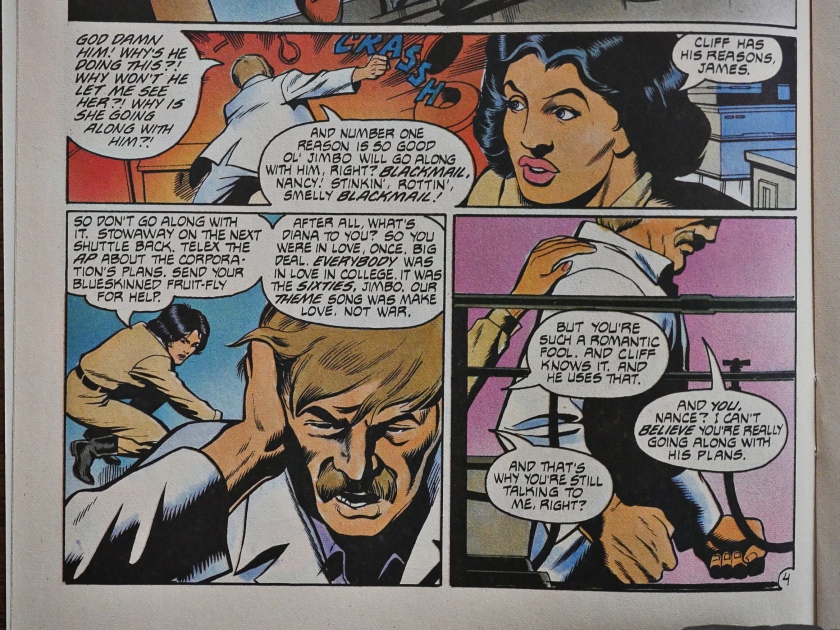 The ping-pong balloons are also problematic in wide panels. Here the reading order is the guy’s first utterance, and then you’re supposed to move your eyes to the very right-hand-side and read hers, and then return to the middle. It’s not well done. 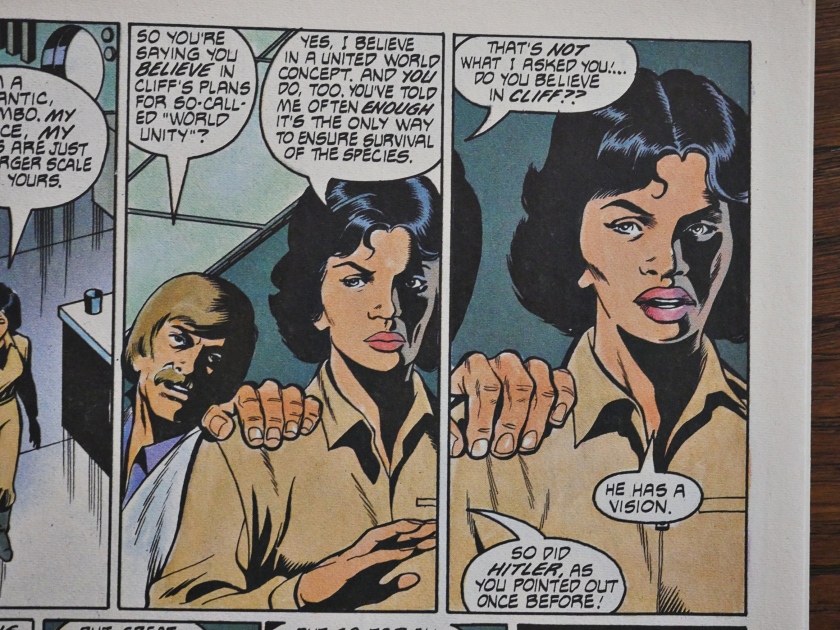 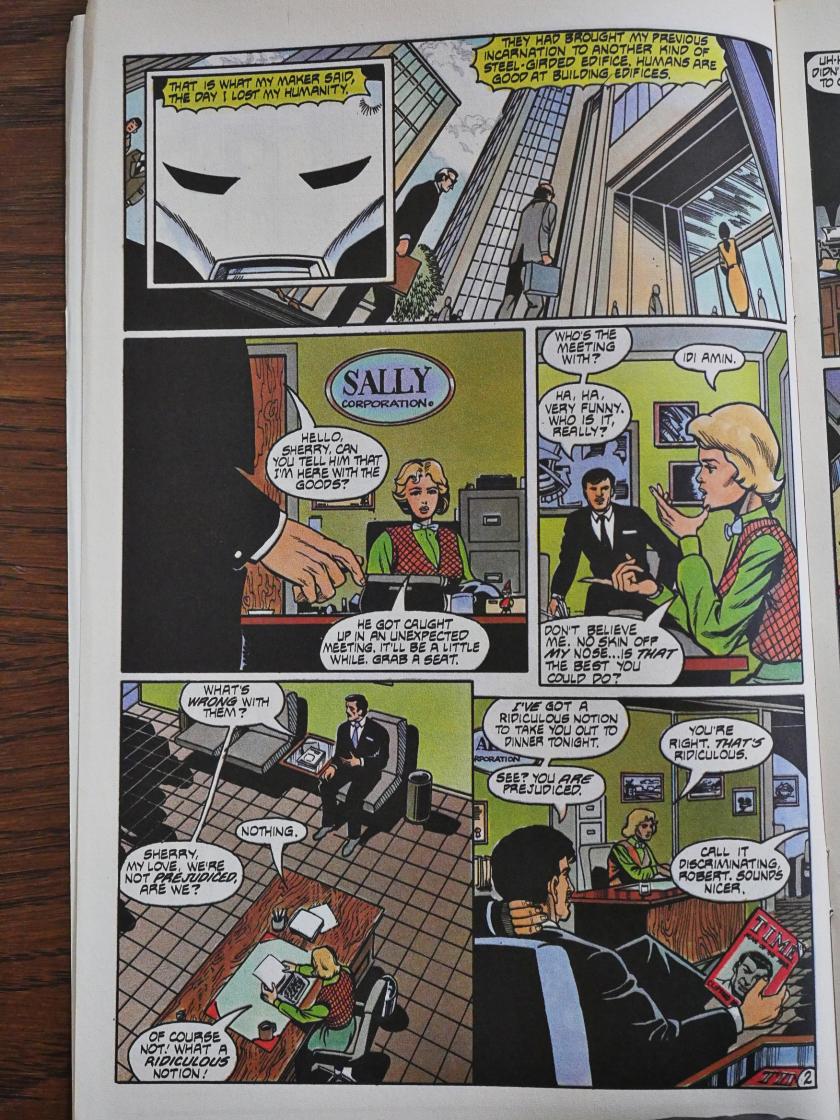 WHAT ARE THEY ON ABOUT 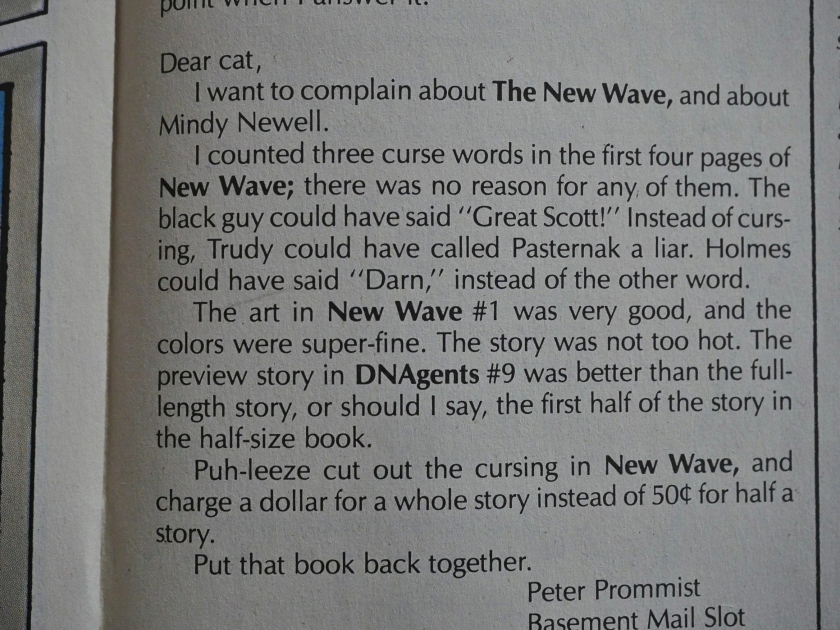 Newell used a few swear words in the first issue, which upset a reader. 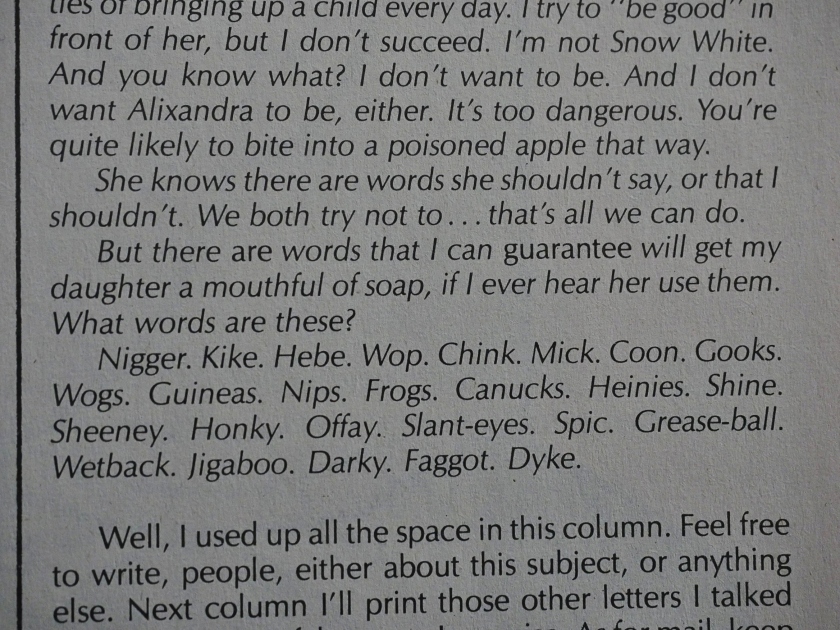 Newell promised never to use certain words, and then lists them. 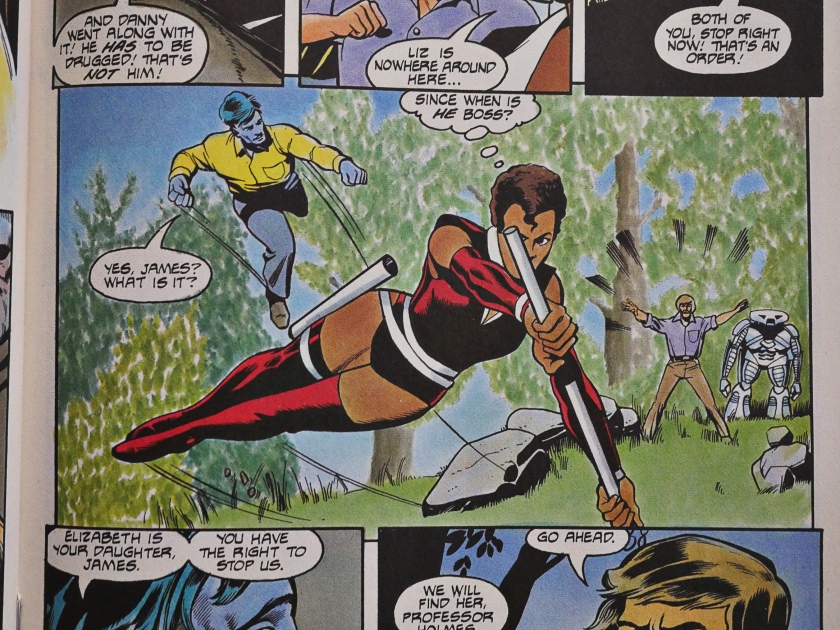 Sam Parsons takes over as the colourist after a few issues, and he does a pretty good job. Sometimes he goes completely wild and fills in the backgrounds the artists didn’t bother with. 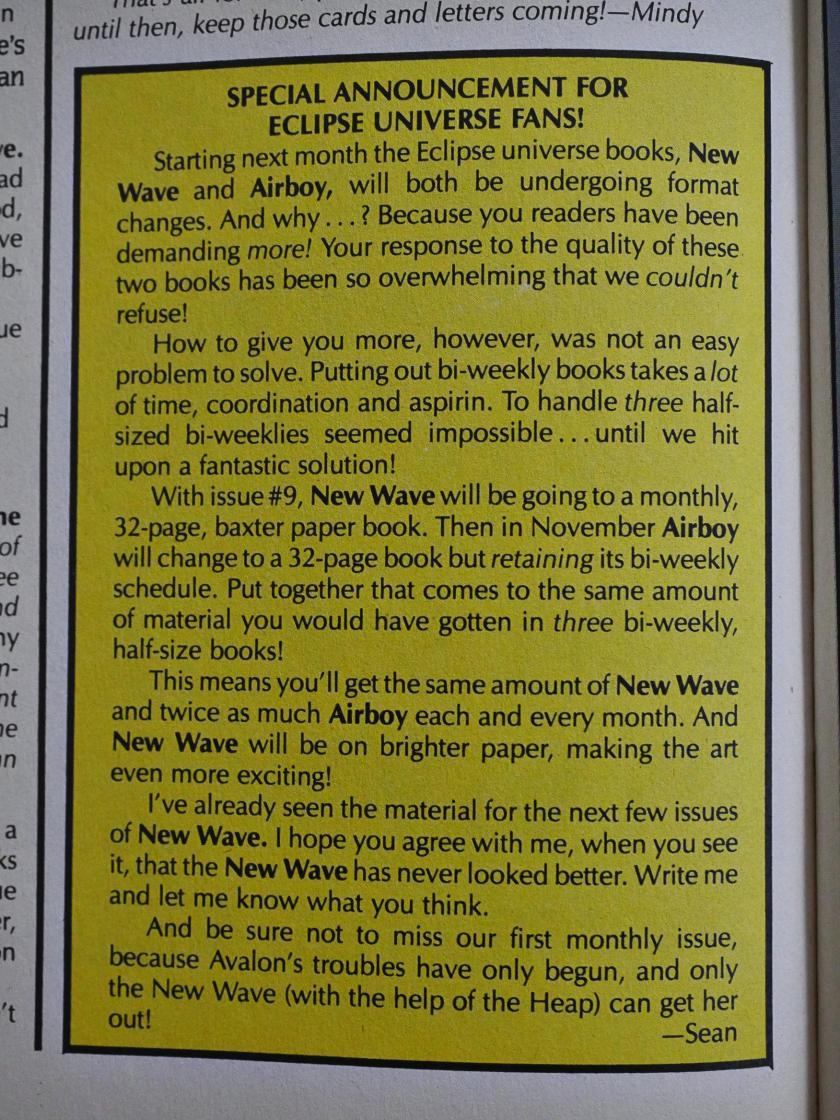 Deming announces that The New Wave will stop its bi-weekly 50c incarnation and instead become a regular 32 page monthly comic. 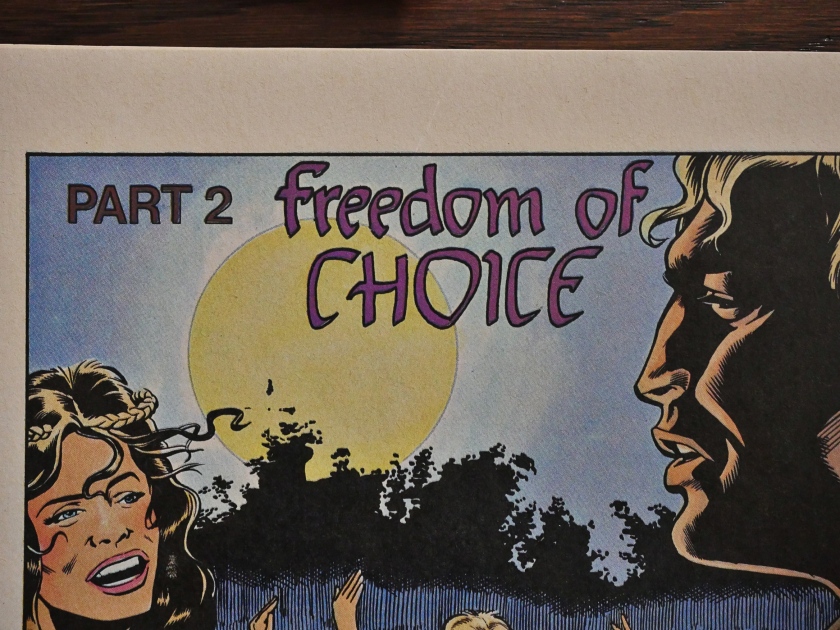 But apparently this happened rather abruptly, because the next couple of issues have two 13 page chapters instead of a continuous story. 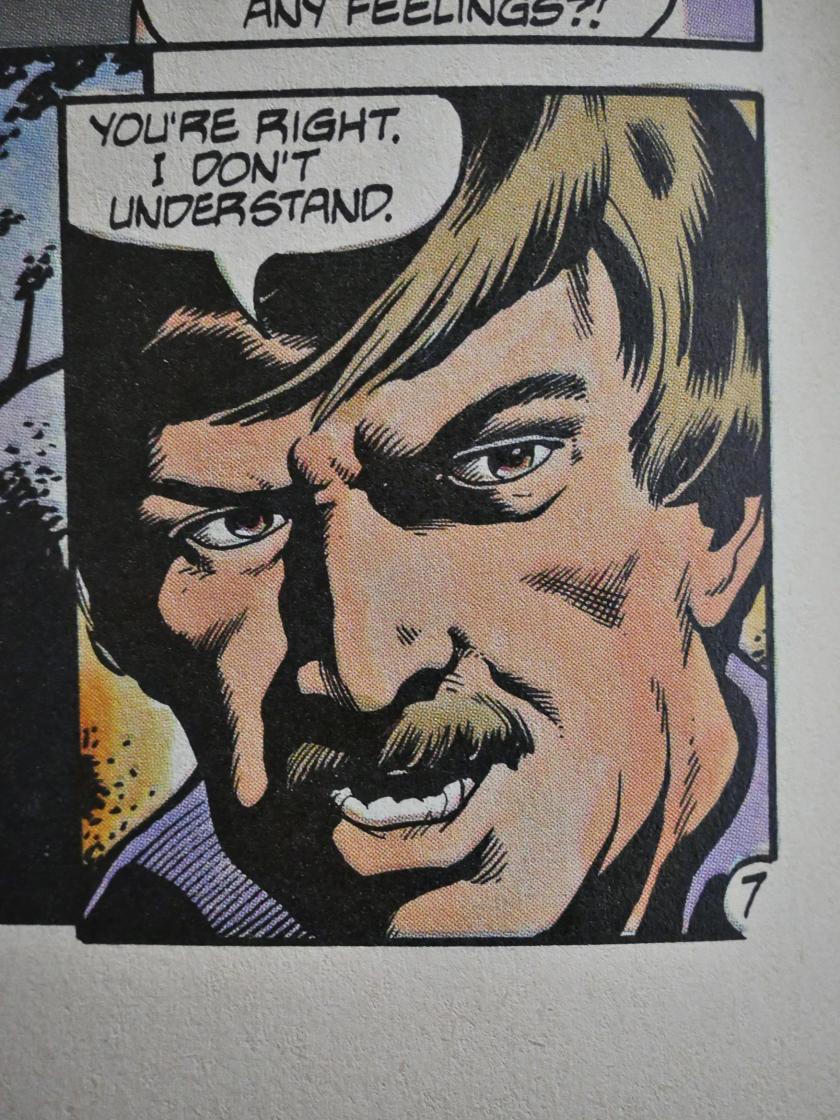 Story-wise, this panel sums up my reaction: I have no idea why anything in the book happened. Newell was perhaps trying to set up plot points for years to come, because there was so much weird unexplained stuff happening. Or perhaps it’s just bad storytelling. 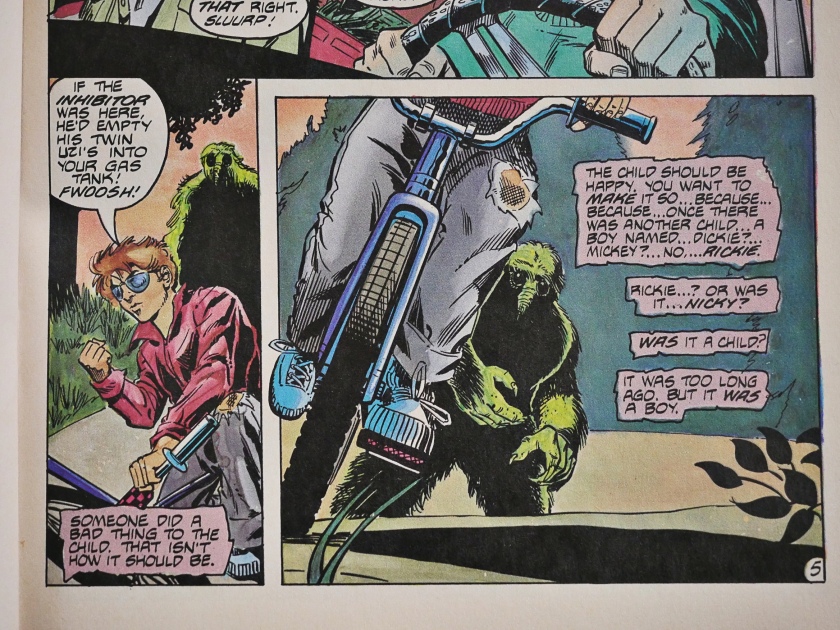 Chuck Dixon stops by and contributes a story about The Heap that doesn’t have anything to do with anything, drawn by Karl Waller/Sam Trapani, so perhaps there were scheduling problems, too? 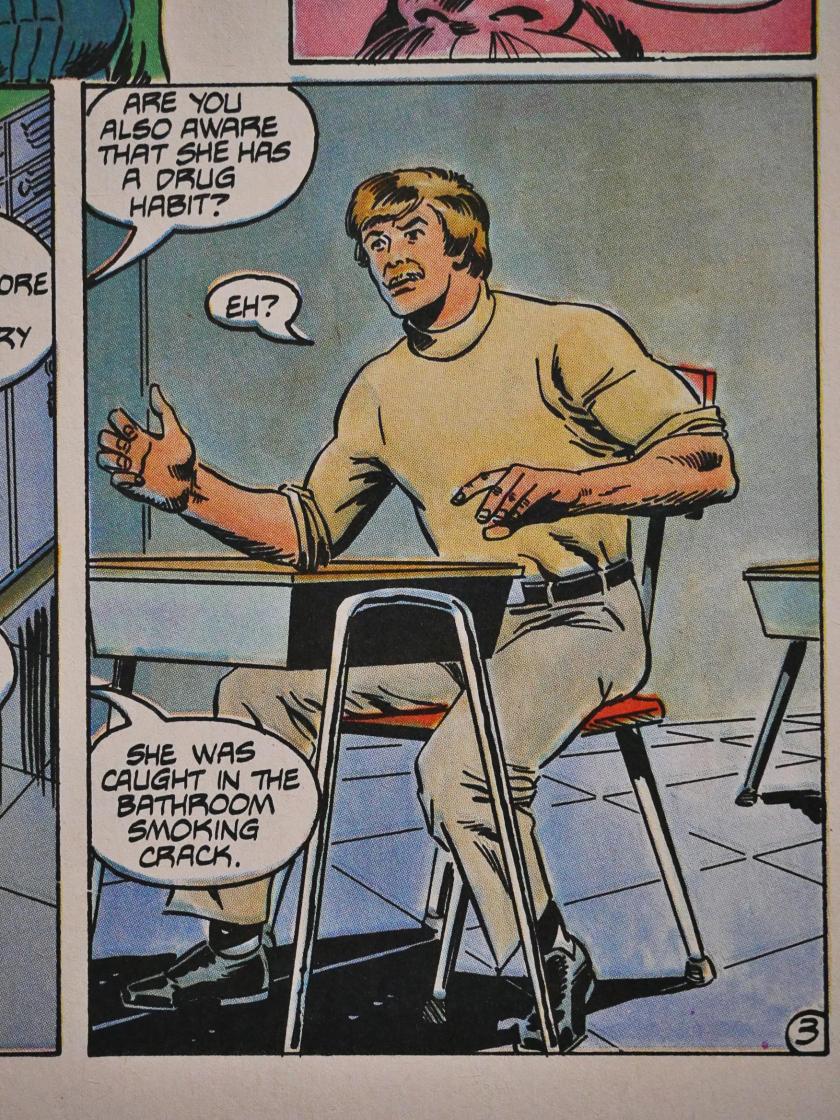 And then Ty Templeton leaves, which means the only remotely interesting thing about the series is gone.

And plot twist: The girls at the school his fifteen year old daughter is going to are smocking crack in the bathrooms. Sure! 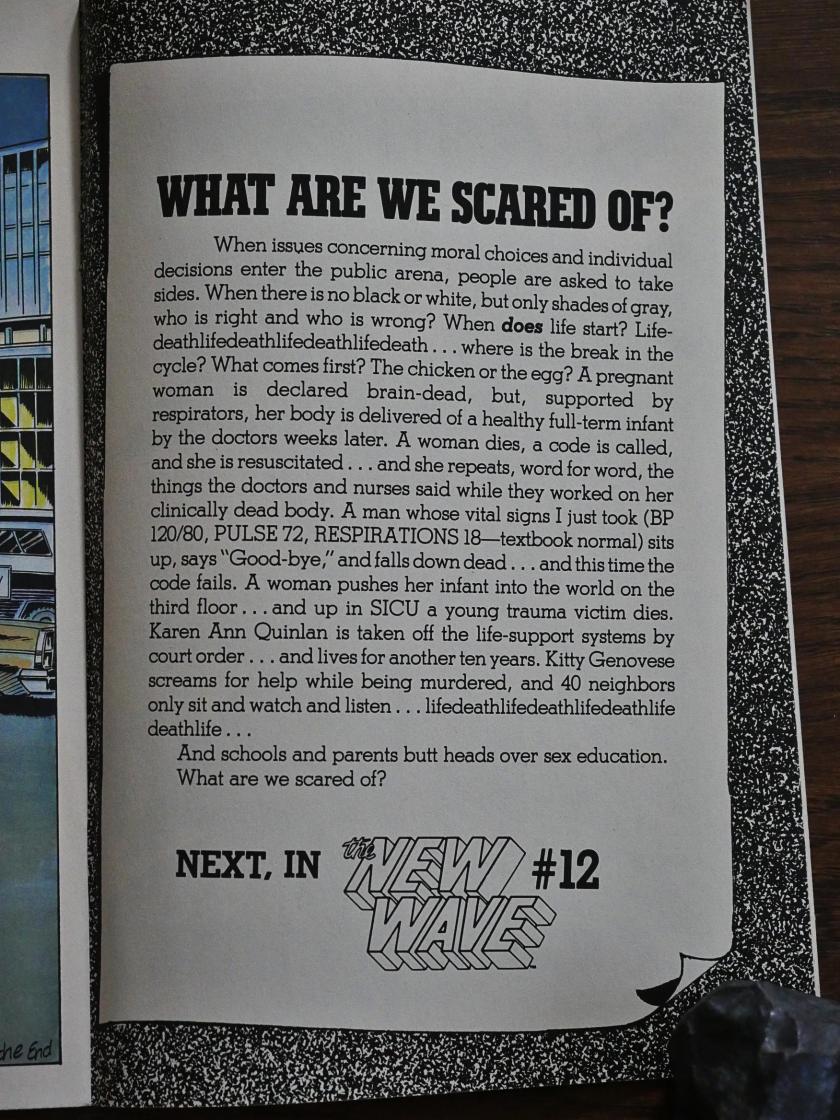 And then we’re promised something fantastic next issue! I think! 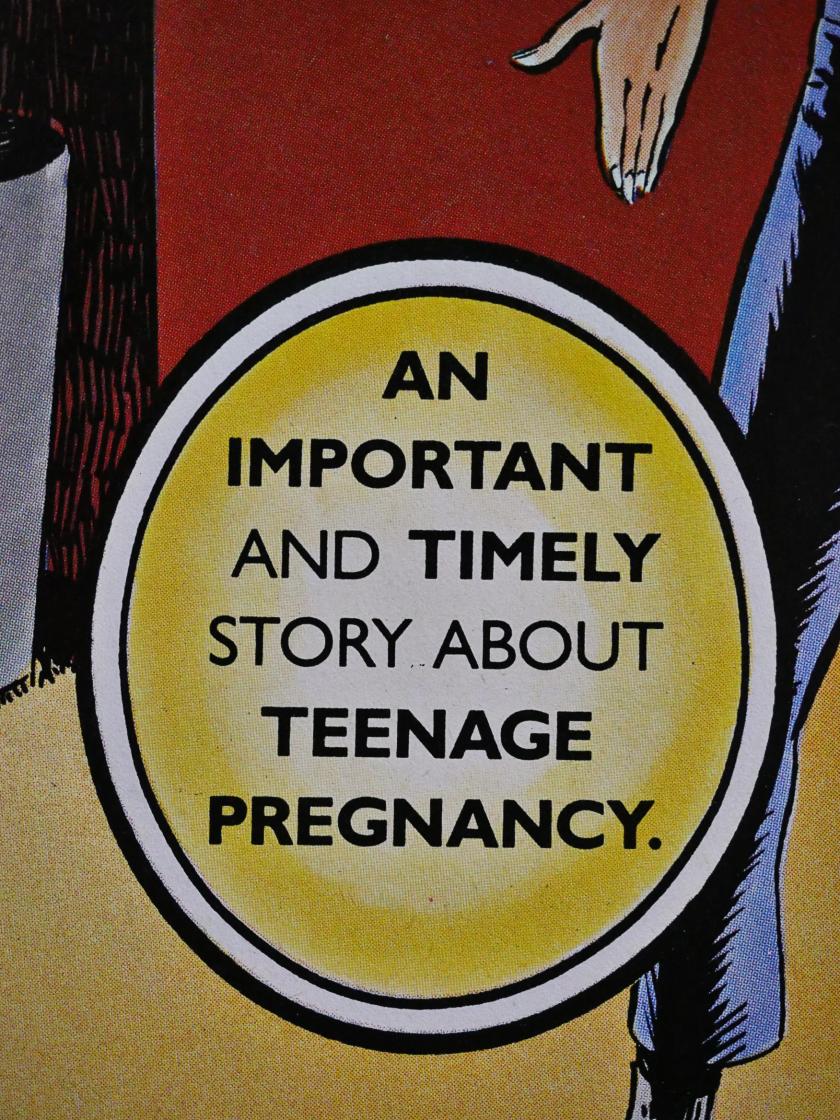 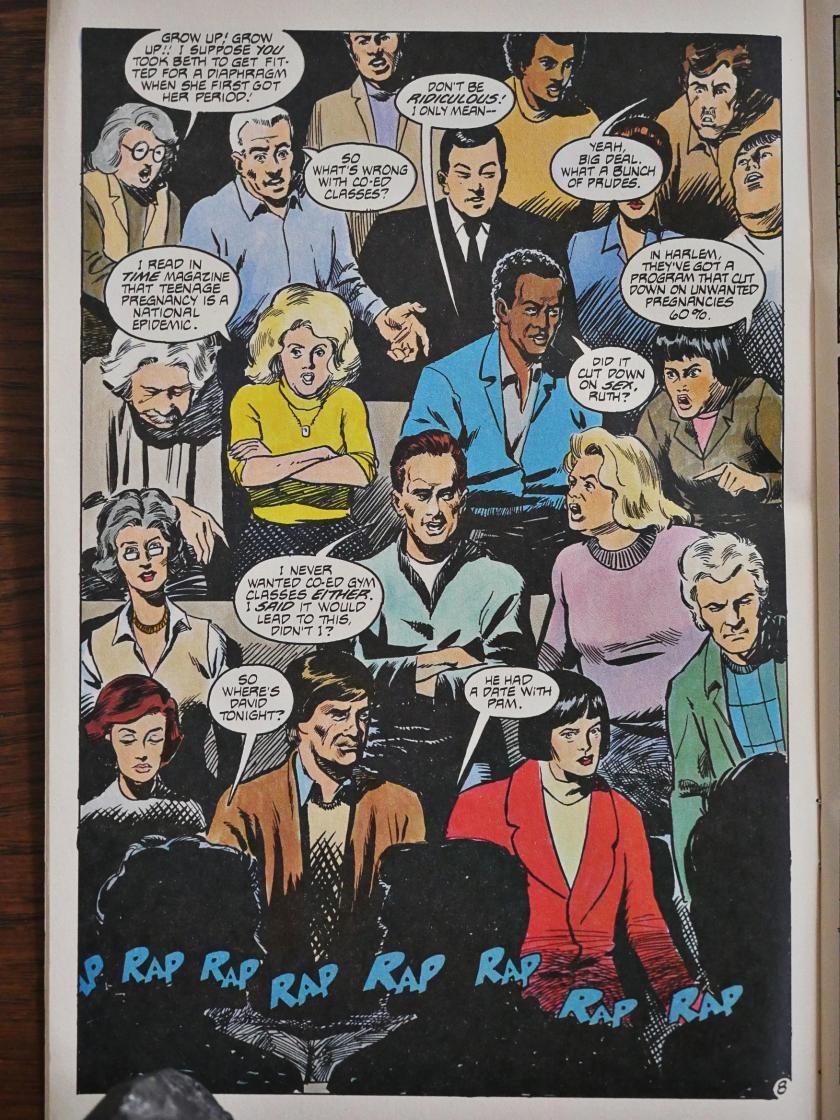 Weeks inks himself in this issue, and it’s a rather nice, scratchy look that suits his artwork well. It doesn’t help with the head to body ratio problems, though… 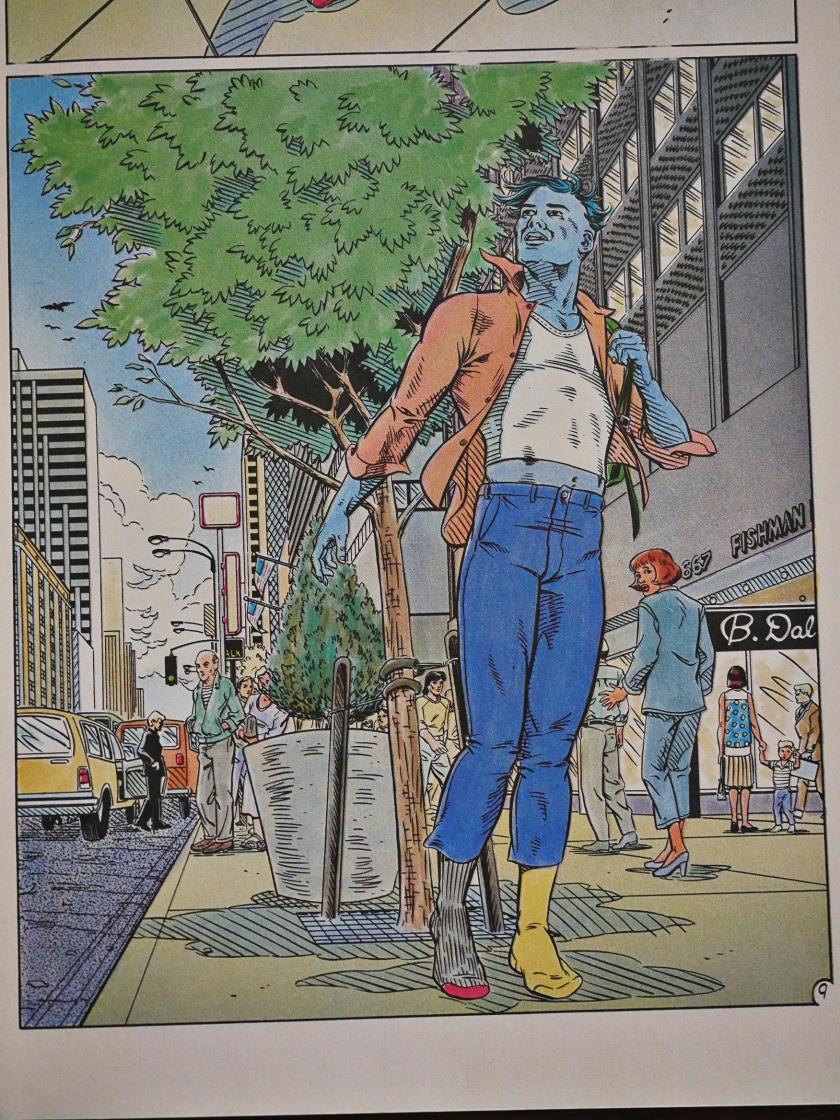 Amazingly enough, Eric Shanower does the pencils to the final issue. Stylish togs! 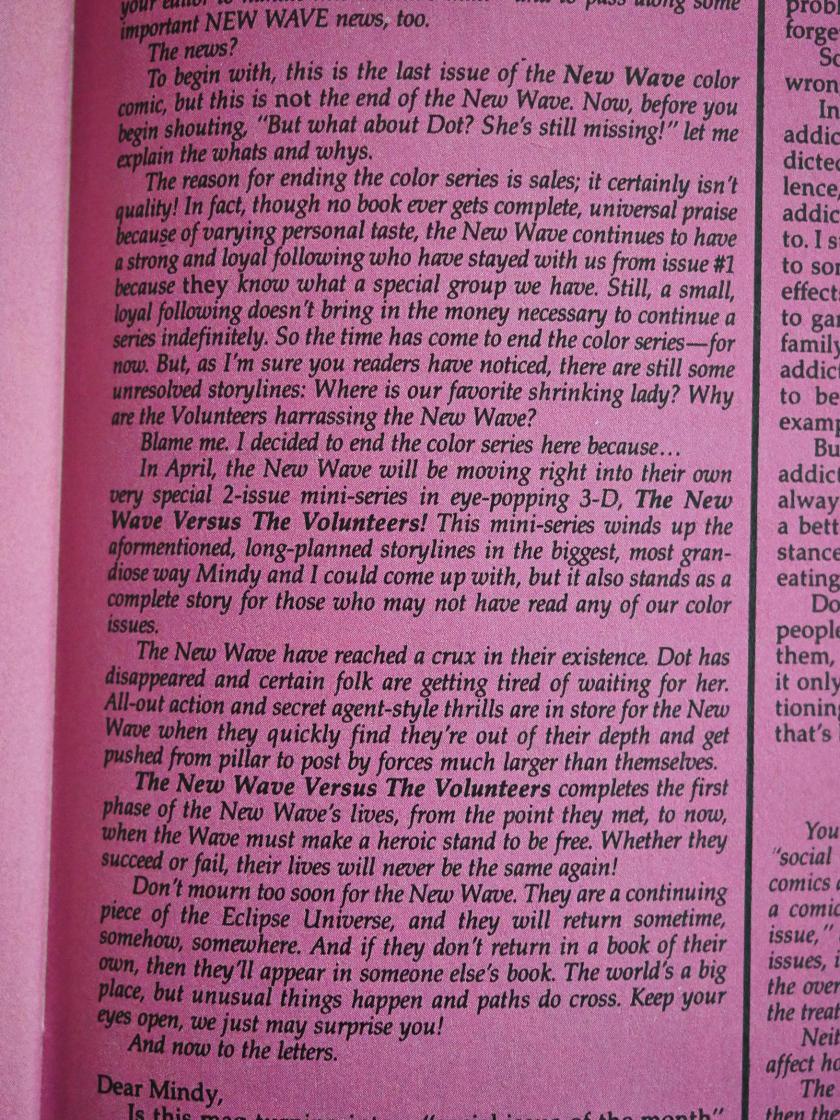 Because, yes, the book is cancelled because of low sales. But there’s a two issue micro-series to follow that’ll tie up all loose ends. But it also stands as a complete story for new readers! Sure! 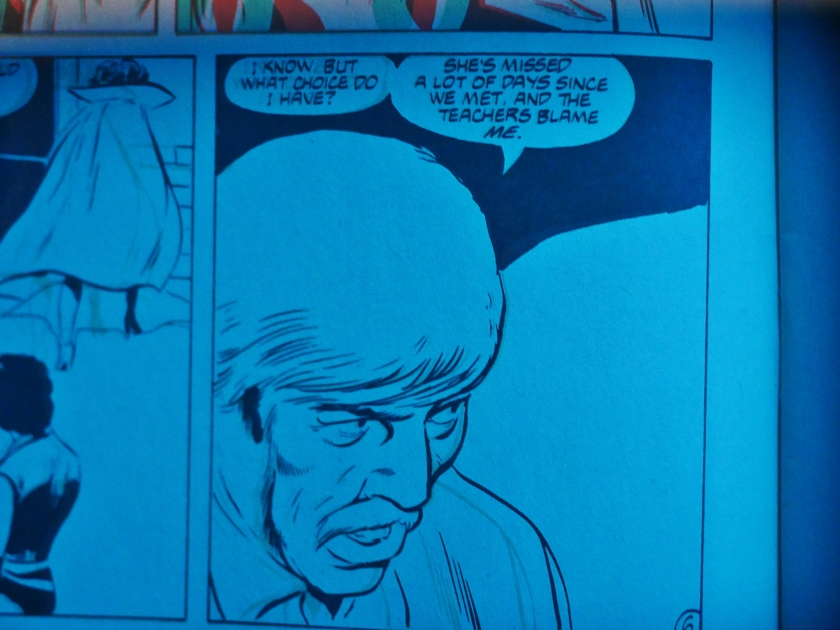 I rather doubt that this was originally planned as anything but a regular issue of The New Wave, because it continues straight from the preceding issues, and is probably pretty incomprehensible for any new readers. 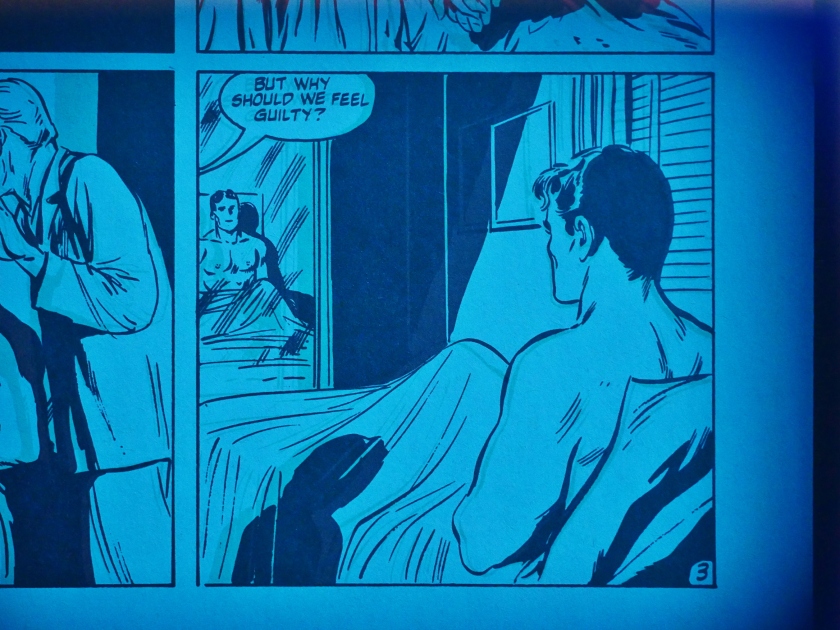 And it doesn’t look like it was drawn for 3D originally. The artist (another new one, Gerald Forton) has a tendency to place all his figures out at the border of his panels. Like this guy’s reflection up there… 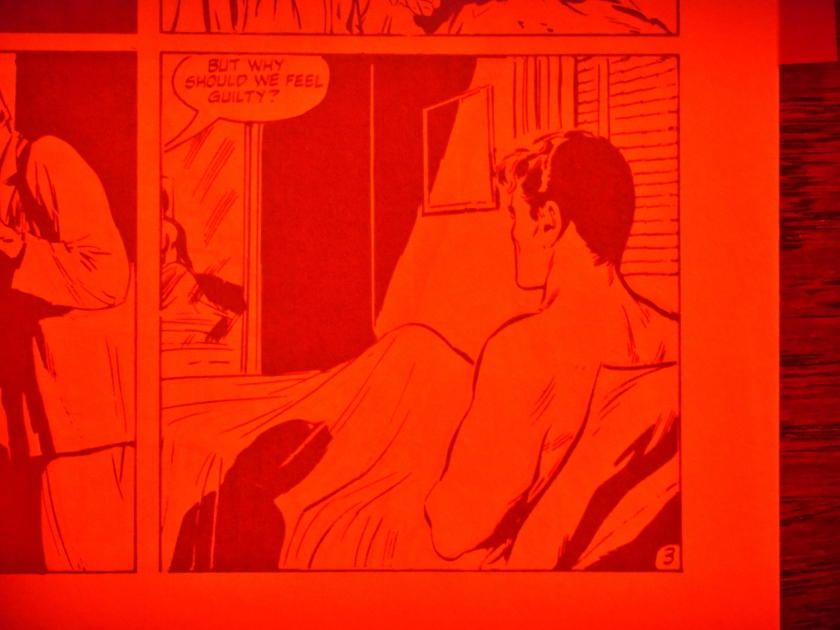 … is completely out of the frame in the red version, which means that there is no 3D there: It’s just a shimmering in the blue eye.

It’s a difficult issue to read for that reason: I found myself constantly trying to focus on things that just existed in one eye, and therefore I couldn’t focus on. 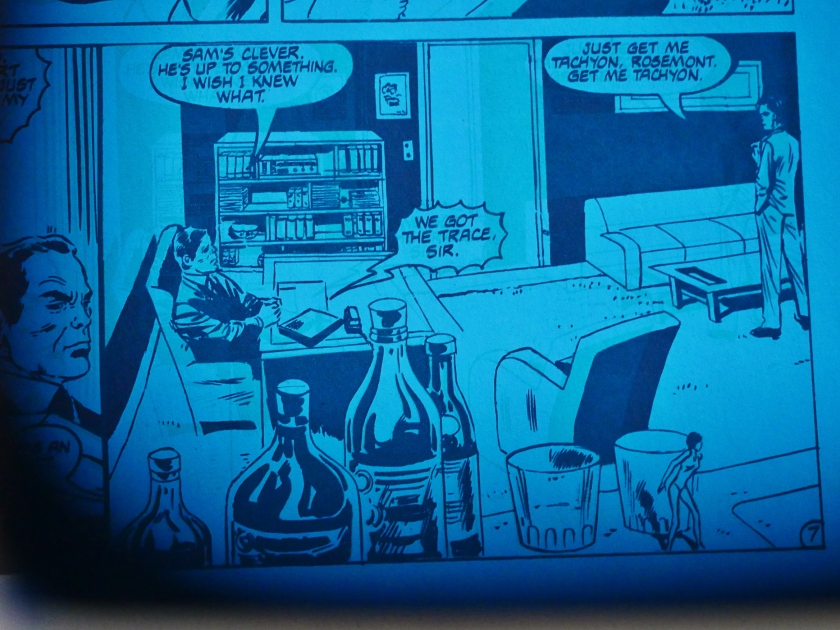 The second issue, though, I can well believe was planned as a 3D thing. It has lots of fun object placement that allows for easy 3D-izing.

As promised, the two issues did wrap up the biggest of the “eh, what’s going on?” things from the series, and gave pretty good closure. So let’s give them that.

The ever-dependable Heidi MacDonald muses in The Comics Journal #112:

All of the problems with Airboy are tripled in The New Wave, four issues of which I’ve ‘read,’ if that is the correct word, for I find them unreadable.

The New Wave superduper team is shown together on the cover of the first issue, but that’s a close a they’ve come to actually ‘teaming up,’ as thus far all we’ve had is endless, tedious bickering and squabbling aboard a space station among these utterly uninteresting characters. The Green Slime did it much better. Perhaps as a reviewer when I say that I can’t make heads or tales of this, but that’s the truth—and lord knows I’ve tried.

In four issues, The New Wave has yet to include anything resembling an interesting story or character. The art is equally cluttered and unenjoyable.

The New Wave has never been collected or reprinted.