What’s this then? Axa? Isn’t she a British comic strip figure? 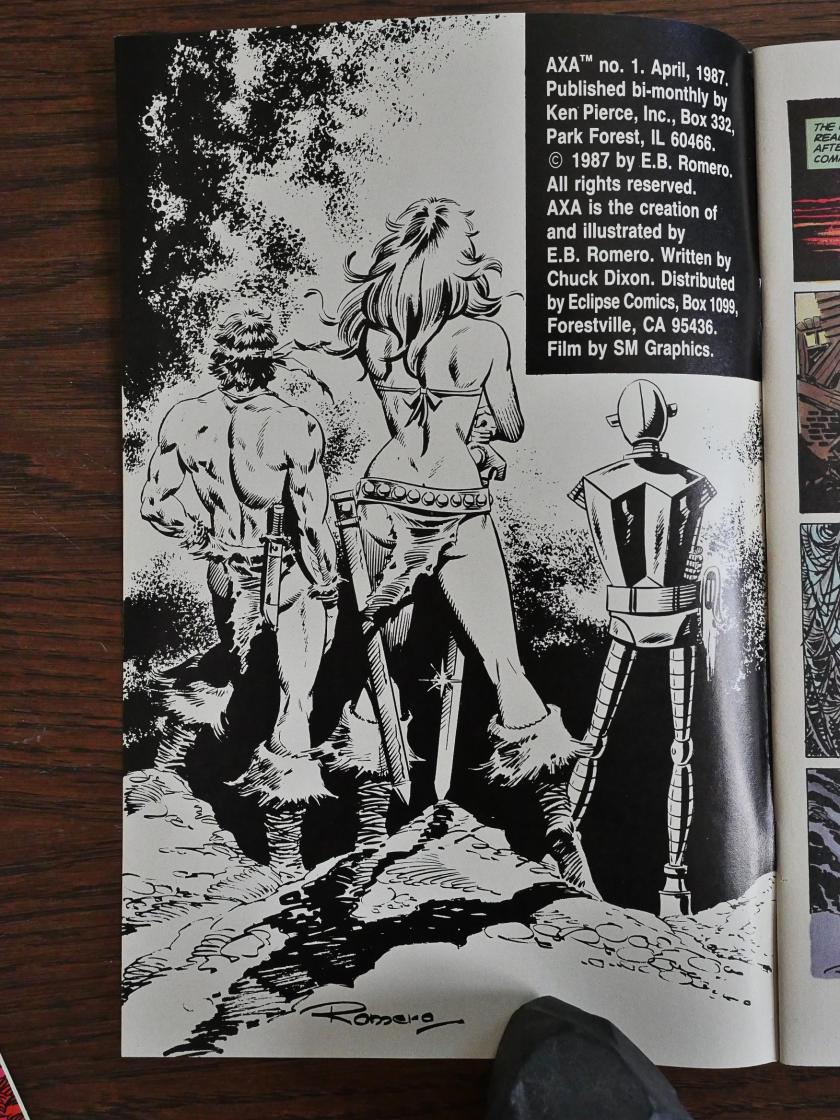 Heh heh. I like the reverse perspective on the inside front cover.

But anyway, yes, indeed, Axa is the character created for the British tabloid The Sun. Romero had previously illustrated Modesty Blaise for more demure newspapers, but with Axa Romero apparently was instructed to create a series with maximum tits and ass (both of which he is adept at drawing), so he created a post-apocalyptic heroine who runs around naked in the wilderness most of the time.

That’s OK in British newspapers, but this was too risque for the mainstream American comics market, so Ken Pierce Books (who had been collecting the comic strip in trade paperbacks) published a more toned-down version in 1987, written by American writer and Eclipse mainstay Chuck Dixon.

Eclipse had had a long association with Ken Pierce, with editor-in-chief catherine ⊕ yronwode working as his assistant in the 70s, and later with Eclipse distributing some of his books, and selling most of his books by mail order. I haven’t covered the Ken Pierce books in this blog series at all, because they’re somewhat out of the remit, but I changed my mind on this series. It’s got the Eclipse logo, after all, and is very… Eclipse-like.

I haven’t read any Axa strips in, oh, decades. In the 80s, they were lethargically reprinted in European anthologies (a lot of them), but never seemed to get much respect. Might have been all the obvious pandering: At any point in any storyline, Axa’s scanty clothes would go missing. But if I remember correctly (and I may very well not), the stories just weren’t much cop, either. 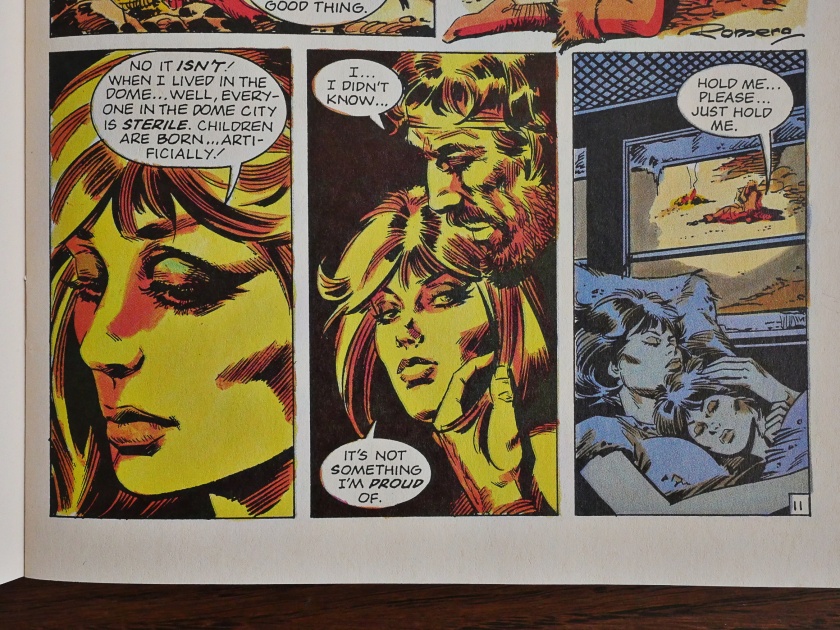 So I have no idea whether Dixon is just following the “official” backstory here, or is trying to give the characters some more depth than they had originally.

Hm… The villains in the first issue are called ‘The Engineers’, but whenever they’re mentioned, the lettering looks kinda wonky. I wonder whether they were originally called something else, and then changed after the book had been lettered?

Oh, Pierce had published more than 100 books by this time? I don’t think Eclipse distributed them all… That’s quite a range of comic strips, from Buck Rogers to Modesty Blaise.

Looking at lists like this makes me want to read them all, but that’s probably not a good idea, time management wise.

In the second issue, Dixon provides another introduction of the Axa universe, which is… rather… superfluous. It’s not a very complicated setup.

By the way, the first issue was presented as being published bi-monthly, and then four months later, the second issue says that it’s a quarterly. 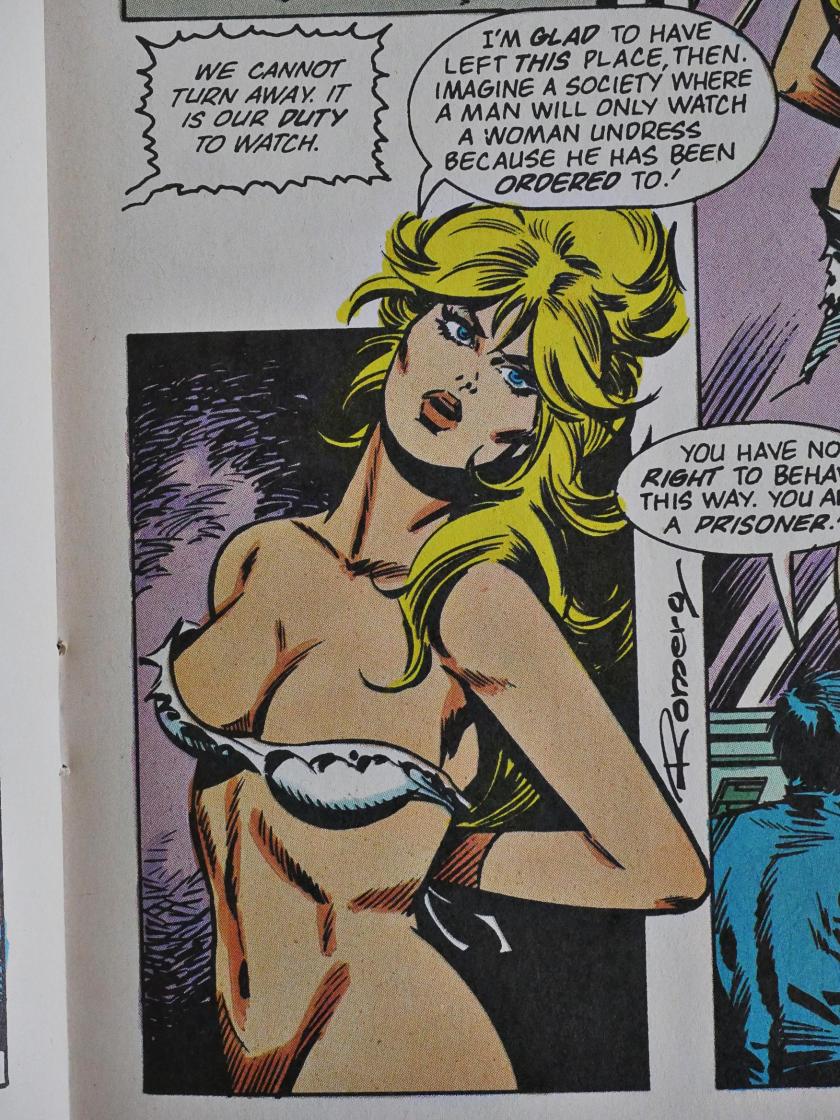 “It is our duty to watch.” I wonder whether Dixon was making a comment on the genre.

And then it’s over, announced by the traditional cliffhanger ending and “NEXT”.

These comics apparently didn’t make much of an impression in the US in this format, either, but they’re OK reads, really.

Here’s Gary Groth on Axa, sort of (during his rant about how awful Eclipse is):

t would be funny if it weren’t so tragic. I mean, it looks like Eclipse will publish anything that looks like it has even the slightest chance of turning a buck.

Or standard T&A offal like Axa and Alien Encounters. (The whole point of Axa, by the way, as seen on virtually every page of the Ken Pierce reprint series distributed by Eclipse, was to contrive ways to rip the heroine’s shirt off. Eclipse has announced that its Axa color comic would clean up its act with a PG version. In other words, the whole sleazy raison d’être of the strip has been skewered. If there’s such a thing as corrupting the integrity of a sleazy idea, Eclipse has done it.)