Frazetta is more famous for his fantasy illustrations than his comics, but he did make a go at it for a while. Johnny Comet is his attempt at a syndicated newspaper strip, and it lasted four about a year.

The editors explain that some of this is reproduced from the originals, some from proofs, some from the newspapers themselves, and some aren’t reproduced at all, because they couldn’t find the strips is question anywhere.

They also explain that Frazetta had a lot of uncredited helping hands and mention a few, but leaves it up to us to spot the one doing a couple of the final Sunday strips. Let’s see if we’re able to guess who it is!

Nick Meglin writes a pretty entertaining introduction, talking about about Frazetta’s working methods, and how he was often misunderstood by his audience after he’d gotten famous.

He also explains that Peter de Paolo, a famous (?) race car driver who supposedly was the writer of the strip, probably didn’t write the strip.

So what’s it all about then? Well, it’s a strip about a race car driver, naturally. I think that makes a lot of sense: There’s lots of action and possibility for intrigue; race car drivers move around a lot, so you get new locations and meet new people; and you can have people sabotage each others cars. Endless possibilities.

It’s such a good idea that in 1959, Jean Graton created Michel Vaillant, which is about a family of race car manufacturers/drivers, which is still running to this day over more than 70 albums. Was he inspired by Johnny Comet? Unlikely; it’s such an obvious idea and obviously has legs.

At least in the European market. 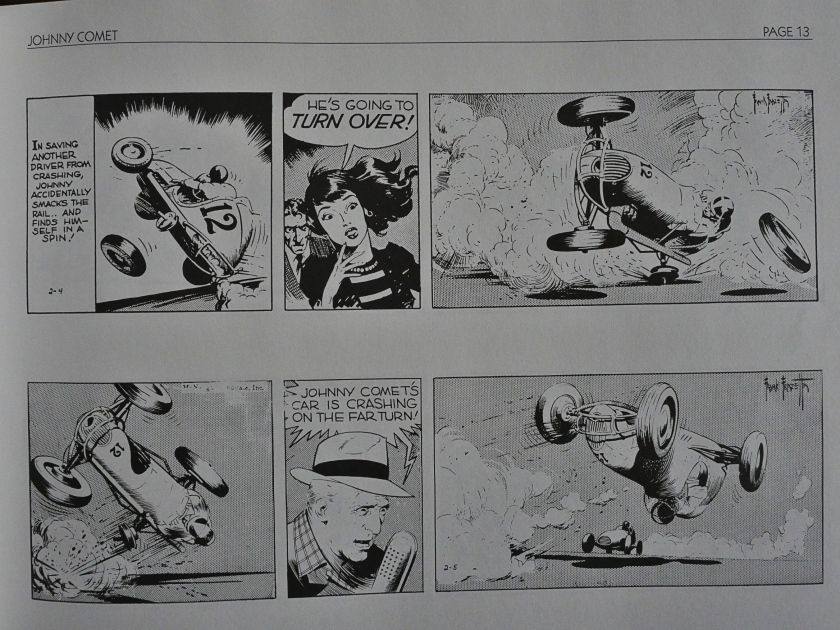 Doing it as a daily strip is tough, though. Frazetta admirably keeps the verbiage down and gives us lots of race track action, but as a daily strip, it must have been a frustrating read. For almost a week, you have Johnny’s car tumbling, and every strip, while looking totes gorg, takes half a second to read and doesn’t progress the plot any.

Michel Vaillant had the advantage of being serialised in French weeklies, and usually at about four pages at a time. You can do a couple of pages of driving around the track and still have plot development in each chunk: Easy.

So perhaps it’s not strange that this failed to find an audience? In any case, it reads like a dream in this collection. 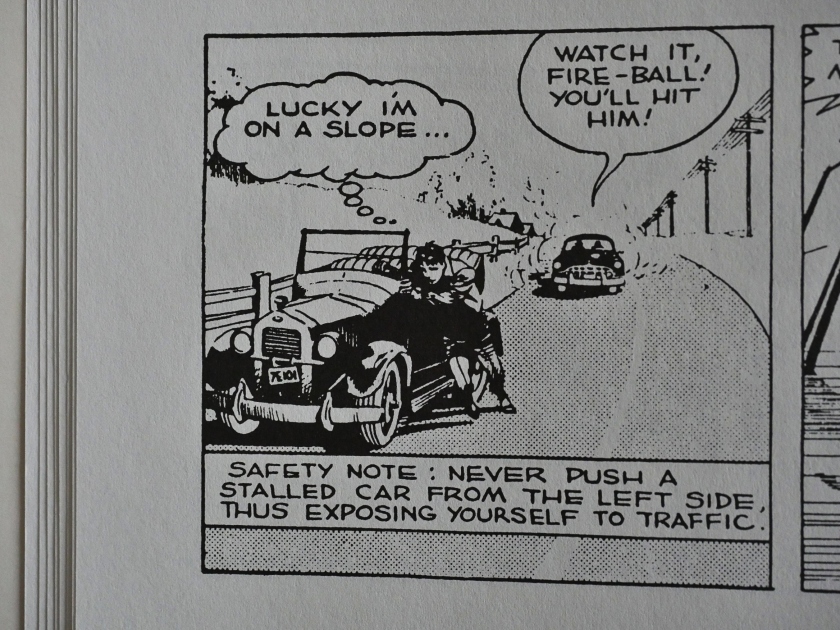 But there’s weirdness going on. Throughout the series, you have these “safety notes” saying what you’re not supposed to do, and that’s usually what Johnny is doing.

So is this geared toward children? Newspaper adventure strips usually go for a more mature audience…

C’mon. No children are driving cars anyway, so you’re giving driving advice to adults? Who thought that that would endear the strip to anybody? 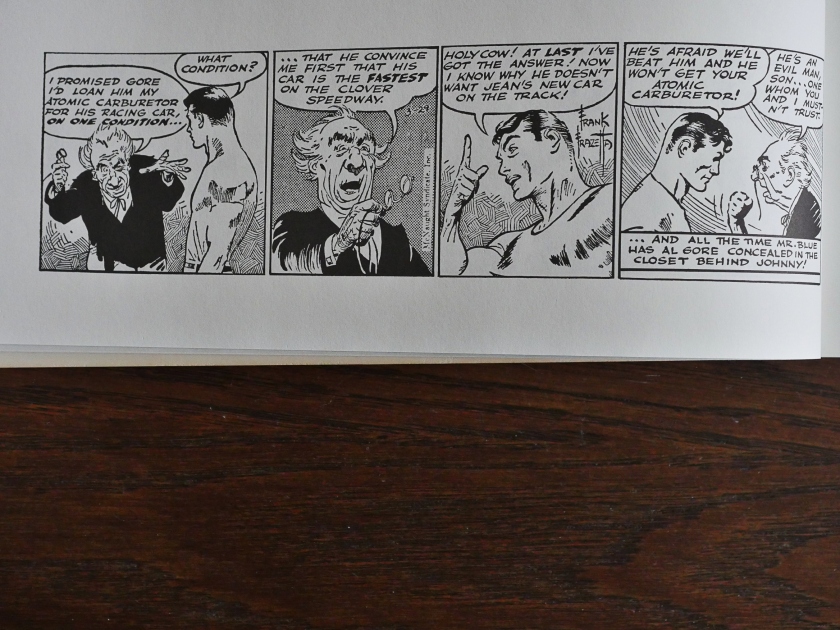 Aaanyway. As the strip progresses, I think it loses a lot of its initial bounce. It’s really a really entertaining, breezy read at the start, but we soon get boggled down in standard plots (well, standard for race car driver slash crime solving strips). It starts reminding me more of Rip Kirby than anything else, really.

And these things make me wonder whether Frazetta farmed out the strip on a panel-to-panel basis depending on who stopped by at night for a drink. He draws Johnny (and girlfriends) in his lush manner, but the villains are often very cartoony.

And his signature gets progressively more complicated.

Frazetta (or whoever wrote this) taps into what an audience wants from watching a race: Accidents! Lots of them! I don’t think Johnny gets to complete a single race without somebody crashing (and occasionally burning). (Michel Vaillant avoids doing it that regularly.) 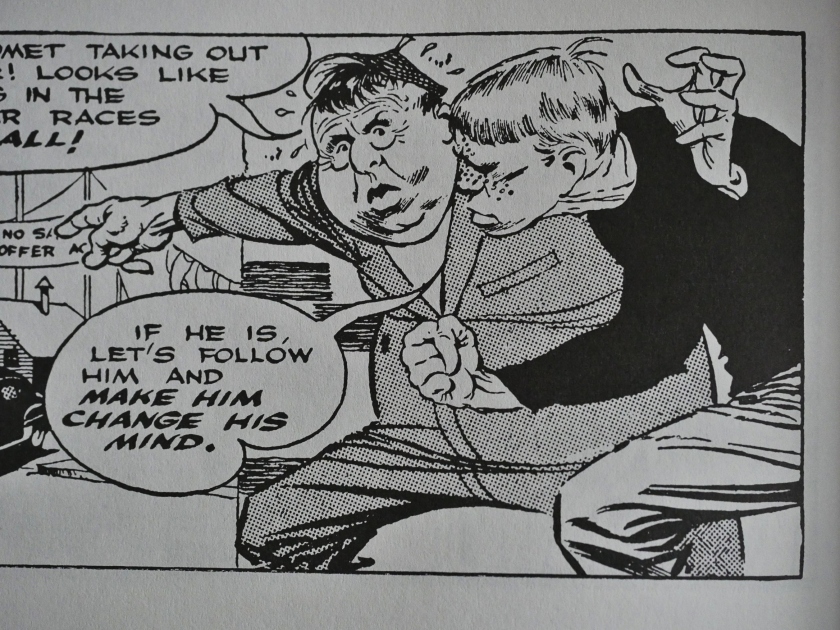 Heh heh. Those are some villainous villains. 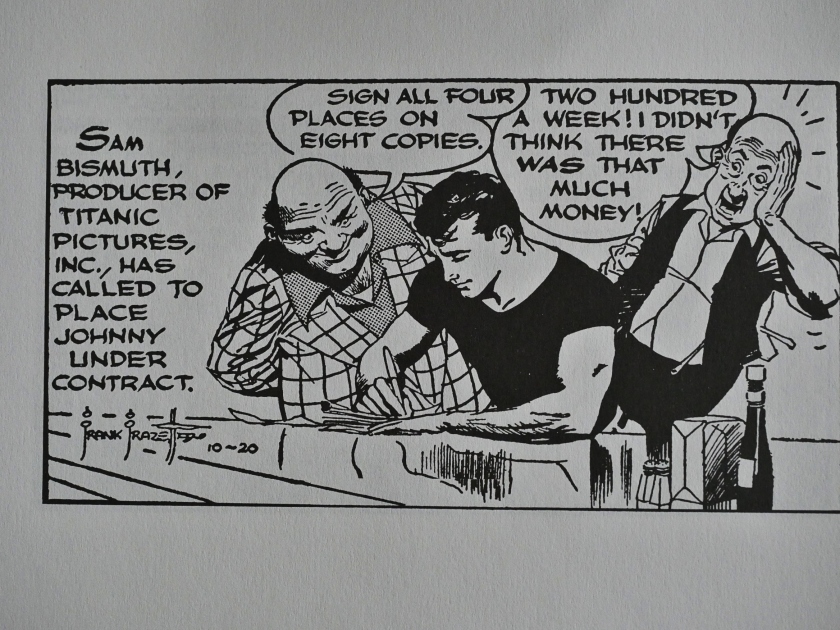 … and then change his name to Ace McCoy in a pretty amusing sequence, and then… he leaves Hollowood and doesn’t do the race track any more, either. I think at this point the creators were pretty much flailing around trying to do anything to make the strip appeal to somebody… anybody…

This is also where the blank strips start showing up, meaning that Eclipse were unable to find any newspaper that carried the strip on that day, so I’m assuming sales were way down, too.

Which brings us to the stupidest plot in the collection: Johnny joins the carnival and that guy up there with the hat is afraid of losing his job, so he convinces his girlfriend to seduce Johnny. 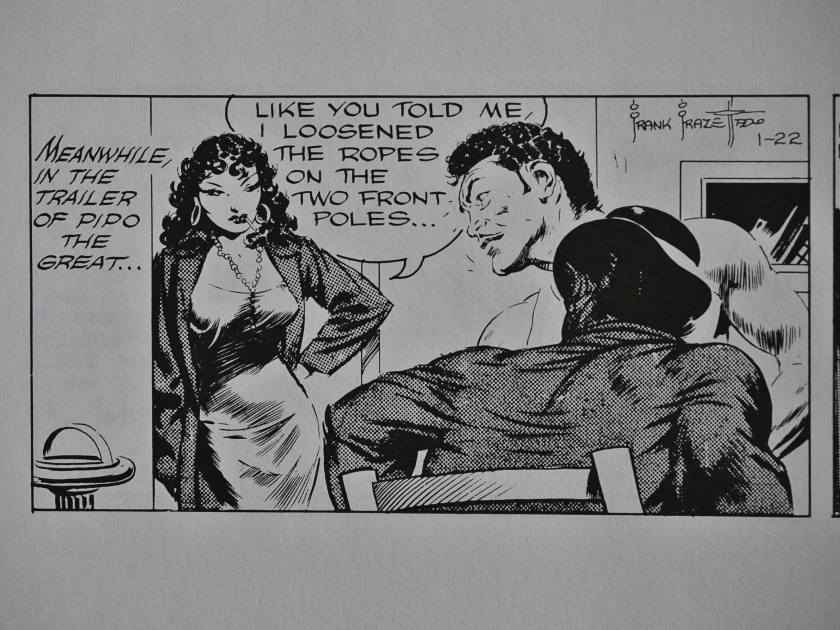 And… after seducing Johnny, she… cut some ropes to a net that supposed to catch Johnny’s car (!), because he… needs to be seduced for the… rope to… be cut… and he couldn’t cut it himself?

I take the plot as a sign that they’d just stopped caring at all and Frazetta was just drawing the strip without a script. It still looks nice, though. 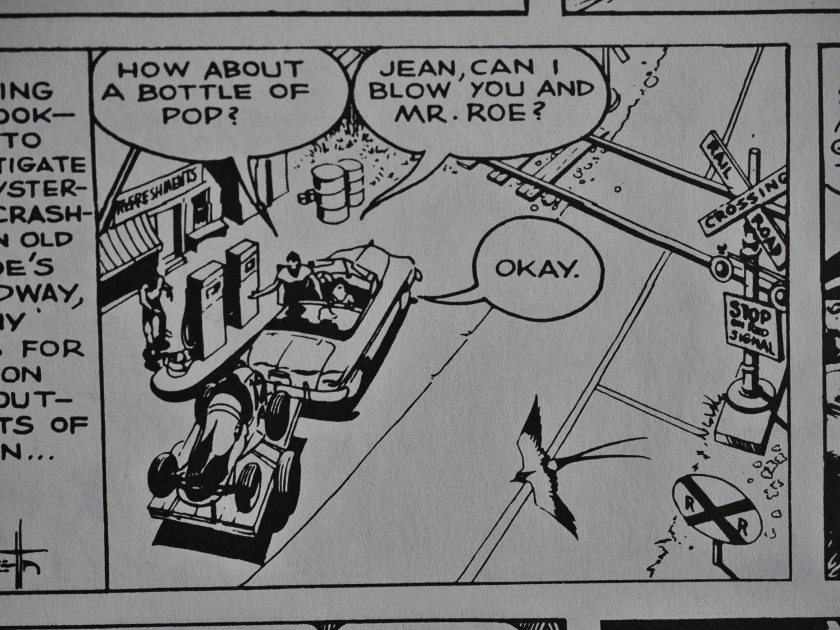 That’s an expression I’m going to start using in every day life.

The strip ended in the middle of some nonsense, but we still have the Sundays to read. They start off being in the same mould as the dailies, and have this box at the end where Peter de Paolo answers (?) a question from a reader.

So another gimmick to try to stand out?

The plot here isn’t among the better ones. Above you get the explanation for why that guy tried to kill Johnny: Noise from his concession. 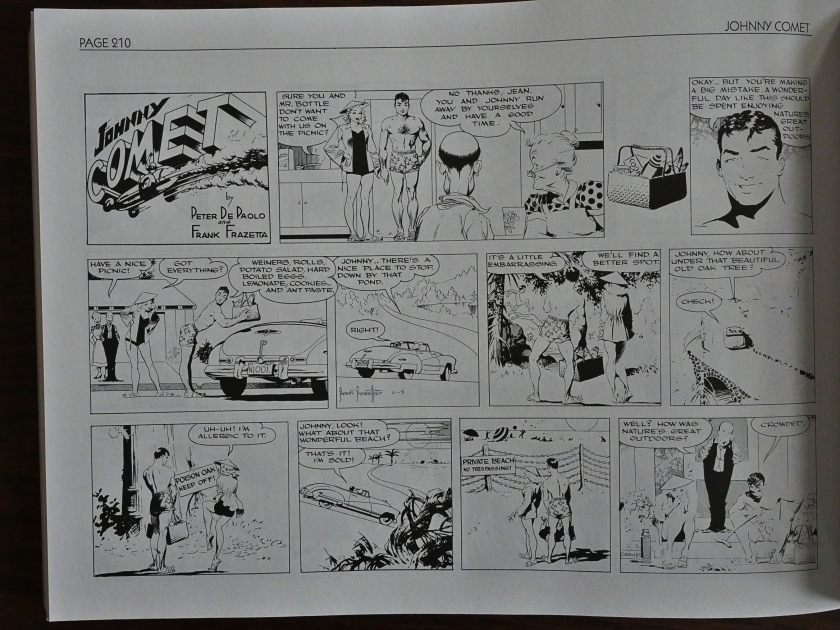 But the Sunday strips change to a gag format, which works better. I mean, not everything’s really… funny… but at least you don’t have to endure those plots.

That’s the page we were asked to identify who ghosted on, and I think it’s Wally Wood. The pose of that bottom left panel is just like what he’d do a couple years later for Mad Magazine. Or could it possibly be Al Capp? Capp could be very slick when he wanted to…

It’s been re-released later (perhaps more than once), and I’m not surprised. It’s better than most newspaper strips from that time period. One person had this to say:

The writing is kind of mediocre, with the basic plot device of a job opportunity for Johnny or his friends meaning ruin for someone else, who will then resort to violence rather than think of a less criminal way of doing things used repeatedly. Mr. Baldwin was also overfond of resolving plotlines with the karmic death of the villains or an offstage arrest.

The art, on the other hand, was excellent, with Frazetta’s trademark handsome lead, attractive women , vile looking villains–and some very nice-looking cars. There’s some fine craftsmanship on display in these strips. A nice touch early on was the safety tips tucked into panels that let you know not to do the crazy stunts the characters get up to.