All the previous translations of Japanese comics published by Eclipse had been provided (and picked) by Viz Comics. Viz pulled out of the deal because they didn’t feel that Eclipse were able to sell sufficient quantities of comics, so Eclipse turned to Toren Smith instead. He was running Studio Proteus as a packager of Japanese comics for the US market, and most of these were published through Eclipse.

I’m just foreshadowing what’s coming in this blog article near the end.

But first we’ll talk about Masamune Shirow’s Appleseed. Shirow, as opposed to most other successful comics artists in Japan, didn’t employ an entire studio of “assistants” (i.e., people who do most of the work), but instead (apparently) did everything himself, while holding down a day job as a teacher. In addition, Masamune Shirow is a pseudonym, so there’s that sense of intrigue which might have helped with his success in Japan (he won the “Best Graphic Novel” prize at a Japanese science fiction festival for the first Appleseed book.

(Note the mirror Earth above because Eclipse forgot to flip the panel after flopping the page.)

But it’s not an unwarranted prize. The first book is intriguing. There’s so much world-building behind the things that Shirow shows us. The page above is part of the sequence where we’re introduced to the main characters, who initially appear to be a plucky, young, housewife with a helpful robot husband. Or something: Shirow doesn’t tell us what’s going on, but just drops us into the world and allows us to make the connections. Like since if they’re talking about dinner, then that robot guy perhaps isn’t a robot anyway?

It’s not until many many pages later that we find out for sure that he is a cyborg with both organic and metal parts. And I love that way of showing us a new environment: Just letting it happen naturally while the story unfolds, and keeps us (the readers) on our toes. 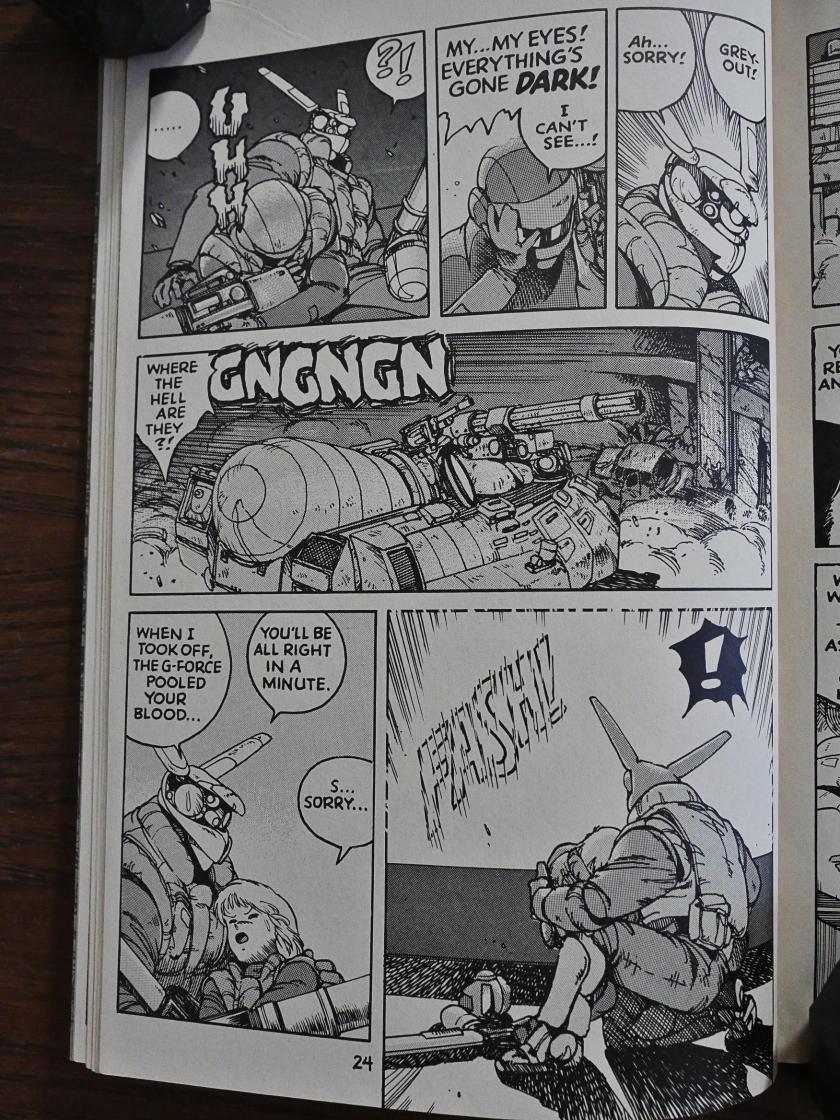 Unfortunately, he also has a tendency to do scenes where it’s just impossible to determine what’s really going on. I’m not sure that’s always an aesthetic choice, or just that he’s kinda bad at having action scenes make sense. 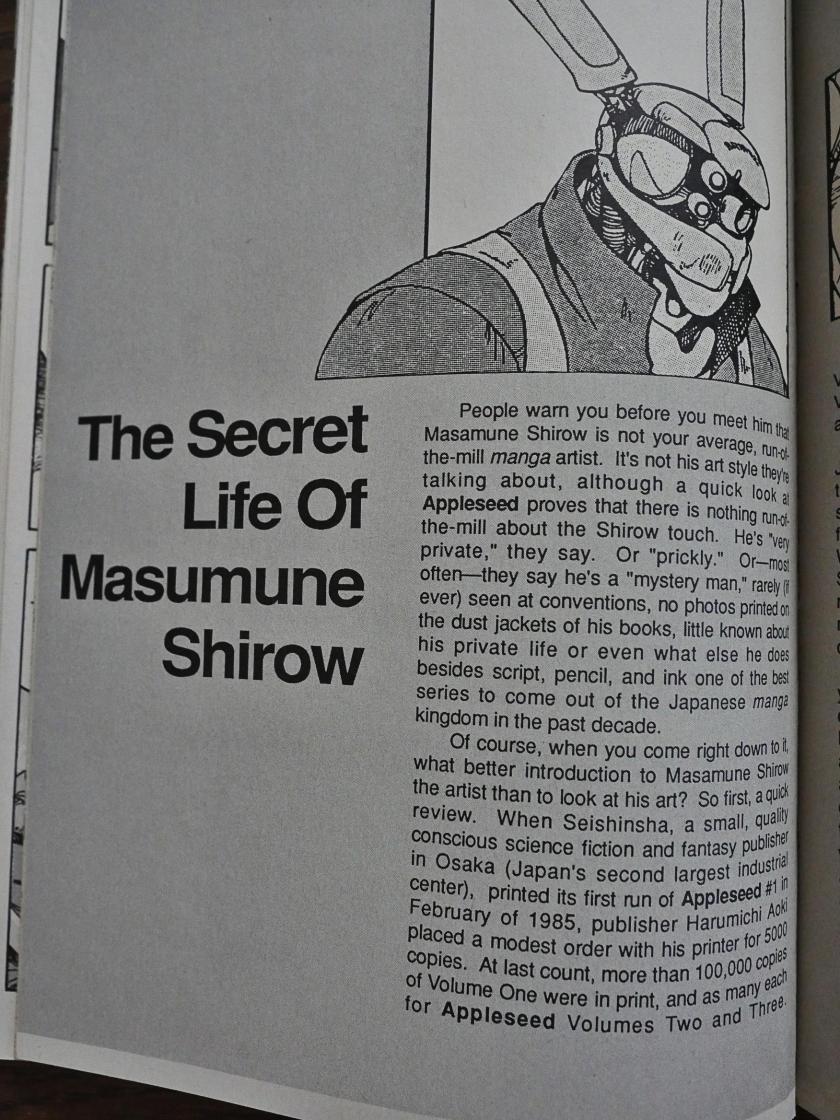 In the first few issues, we get an introduction to Shirow (and a bit about Japanese comics in general) by the translators.

While the Viz books were designed and packaged completely by the Viz people, the Proteus books look somewhat more like normal Eclipse books. The main difference is that these are squarebound 48-62 page comics, but they do have the normal Eclipse house ads and logos and stuff.

The first two books are all about the future of mankind and political intrigue and post-human society. I found it refreshing how many of the players were female characters. Shirow allegedly grew up mostly reading comics for girls, so I guess that rubbed off on him. Or perhaps he just enjoys drawing women more. 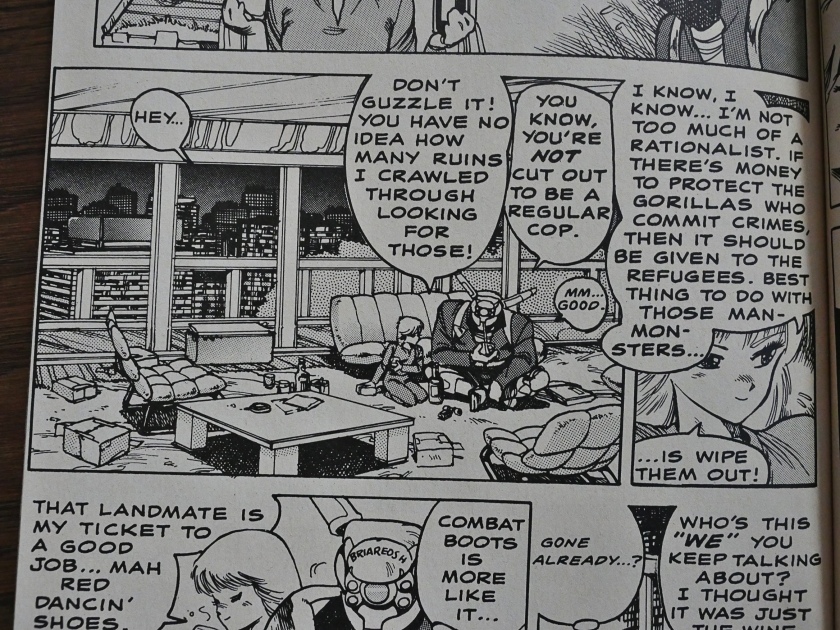 There’s a lot of dialogue I’m not sure I’m interpreting right. She seems to be saying that all criminals should be killed or something, but “if there’s money to protect the gorillas who commit crimes”… Is that where money to police forces go? To protect the criminals?

I don’t know whether there’s something lost in translation, but this comic requires a lot of head-scratching.

Eclipse controversially dropped a few pages from Mai the Psychic Girl where Mai took a shower. All the letter writers were irate. Eclipse didn’t do that with the shower scenes here, and not in the next volume, either, where there’s about 20 pages of two women taking showers, getting massages and talking about politics.

This is not a fast-paced book. There are sudden busts of inexplicable violence involving robots and explosions, but it’s mostly people talking at each other at interminable length. 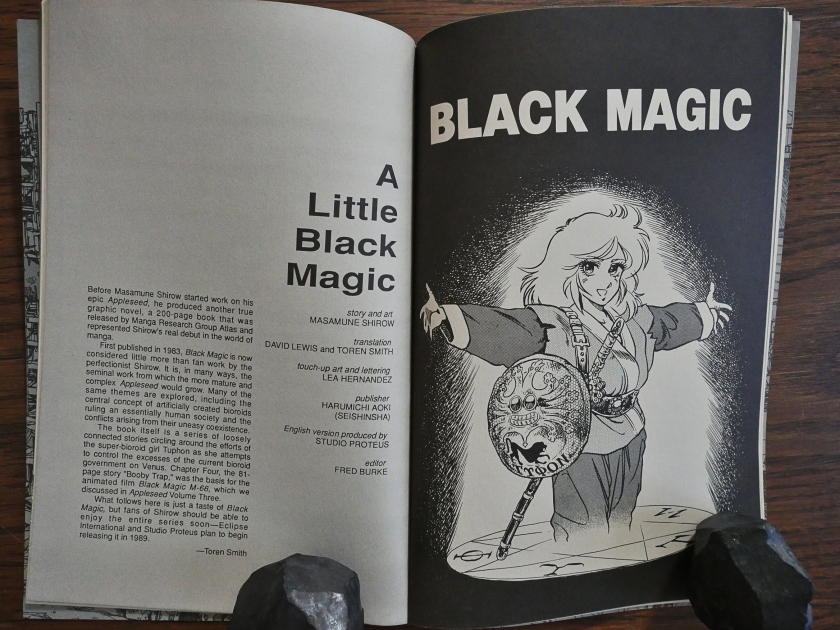 The first three books are five 48 page issues. Now, the source material is just 190 pages long, so they could obviously have packed that into four issues. This means that there’s a lot of padding going on. Long, long letter columns and lots and lots of house ads. And one backup featuring an earlier Shirow work, Black Magic, that Eclipse later reprinted in full. 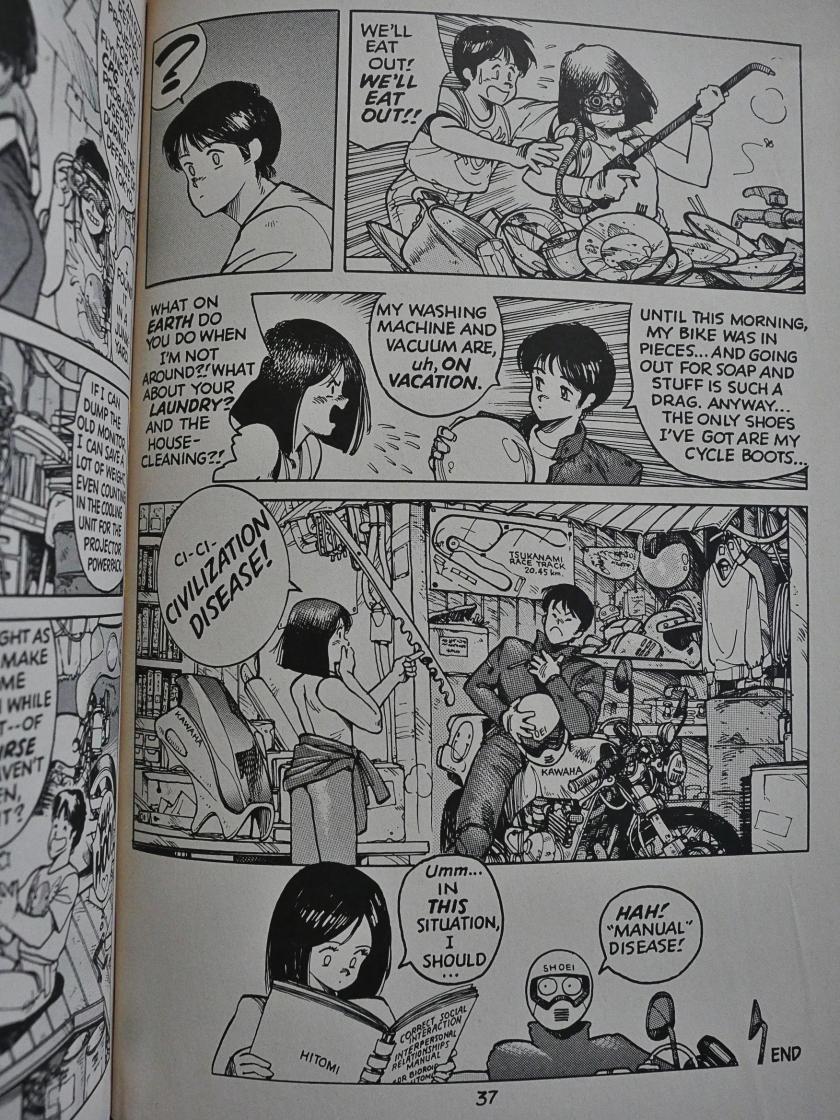 Shirow drops in scenes of comedy every now and then. Some of these are more impenetrable than others. What’s the joke here? I mean, it’s funny that she looks this up in her manual (she’s a semi-artificial life form), but what’s the “civilization disease” and why is then “‘manual’ disease” funny?

The physical humour is easier to parse. Here we have our heroes becoming so surprised that they tip over (so that we only see one foot each in the panel above to the right). Shirow likes that gag so much that he repeats it twice more during the rest of the series. And why not?

Toren Smith explains how he came to do Appleseed (and other Japanese comics) for the US market. Apparently he was the one to pick the various series, and not Eclipse. 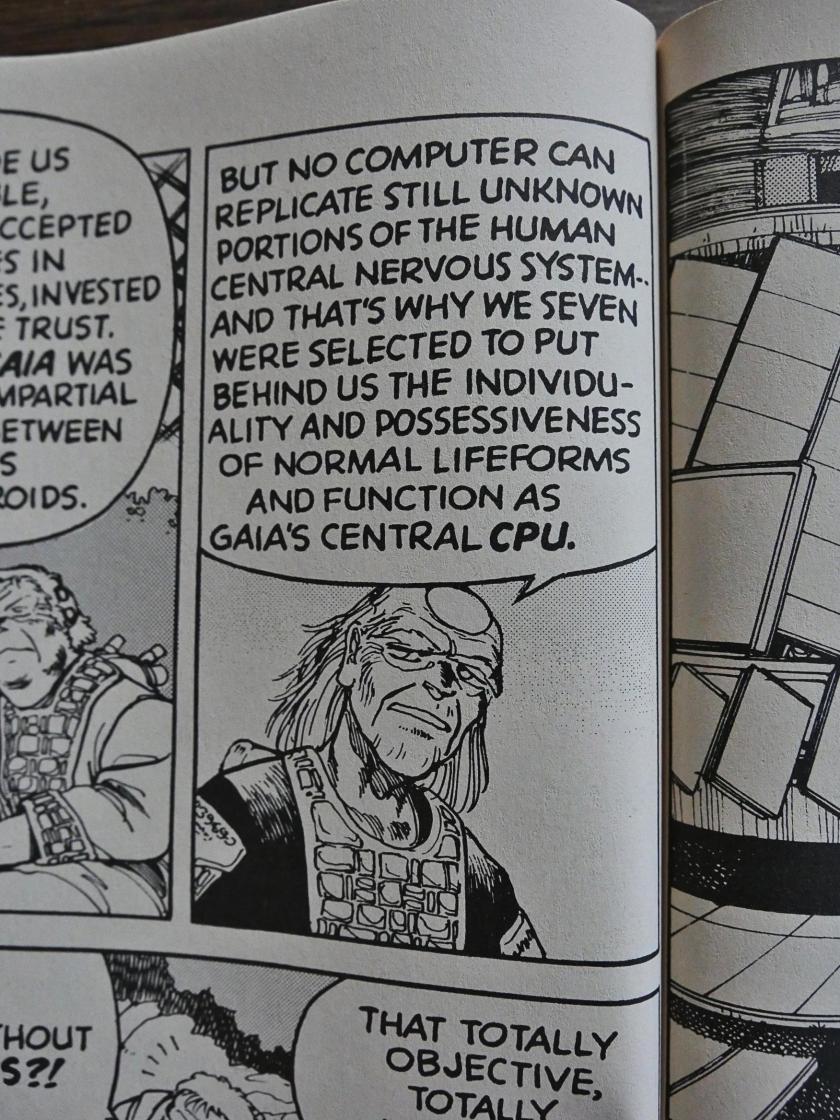 At the end of the first book, Shirow gives up letting the story just unfold and resorts to the simplest cheat there is: “As-you-know-Bob”-ing. The characters stand around telling each other what all the characters involved has to already know, but we don’t. It rather ruins the fun of reading the book.

A reader points out that Shirow’s pages are hard to read, especially the action sequences.

The problem is mainly that Shirow doesn’t vary his drawing between the background and the foreground characters, so you have to play “Where’s Waldo” a lot. It’s compounded by his bizarre robot/exoskeleton designs, where you don’t really know how many appendages each character has, or where one ends and another starts. 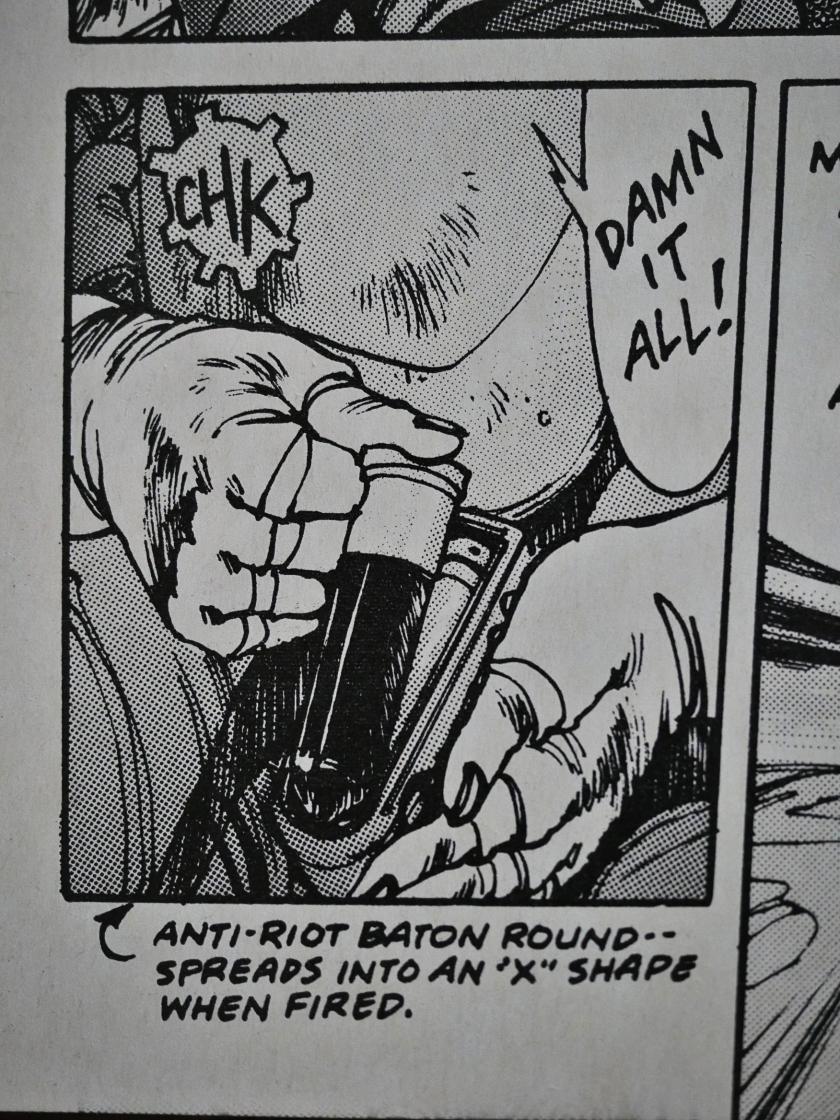 Shirow is really fond of introducing the reader to new weapons tech (that he then explains in footnotes under the panel).

Anyway, I think that perhaps Shirow grew tired of his storyline, because after the first two volumes (which was about all those grand things), the last two volumes are an even more confusing mish-mash of heists, espionage, sabotage and politics. I started losing interest pretty quickly, so perhaps it made more sense than I think it did. But it seemed to me that a lot of the plot lines didn’t really go anywhere, and Shirow instead just had fun drawing a lot of people shooting each other.

And you can’t really blame him for that.

Eclipse had to resort to having other artists drawing the covers, and readers weren’t happy with that.

During the third book Shirow provides the filler material himself, writing short essays about the world and stuff.

And also detailed drawings of various technical bits from his universe.

And then it’s over. Shirow said that he’d originally planned on doing ten books, but had then compressed it down to eight. But he didn’t return to the series after the fourth book, and I think the reasons are pretty obvious: The series stopped working sometime during the second book, and the rest was just treading water.

But the first half of the first book is pretty fun.

Shirow went on to greater fame with Ghost in the Shell.

And apparently I’m not the only one to be frustrated with the last two books:

On the whole, I like the story’s ambition and sense of grandeur, though it’s on a lot of the specifics that I take issue. For most of the second half of the manga, it’s almost nothing but ESWAT missions against extremists from the Sacred Republic of Munma and other high-class criminals. While the dialogue and the attacks do reflect a lot of detail and research about real-life special forces, it does make the story a bit repetitive after a while. There were a few times I had to confirm which chapter I was on and who was supposed to be the enemy.

Dark Horse has reprinted Appleseed… because Toren Smith parted ways with Eclipse shortly after this series was published. I’ve tried to Google the specifics of why he left originally, but he apparently never talked to The Comics Journal about that, so I don’t know.

But remember Viz pulling the books from Eclipse because they sold so little?

I remember reading that Toren Smith was surprised that his Japanese translations sold so much more at other publishers and suspected that something was up and asked to see the accounting details from Eclipse.

This was around the time that editor-in-chief cat ⊕ yronwode and publisher (and owner) Dean Mullaney were getting divorced, so things might perhaps have been more chaotic than usual in the offices. In any case, the story as I remember it, but can’t verify now, because I can’t find the quotes, is that allegedly he received back two sets of accounting books: One copy of what he’d already been told the sales were, and the real books, that showed much higher sales numbers.

He then sued Eclipse.

In December of last year, Toren Smith and his company Studio Proteus filed a lawsuit against Dean and Jan Mullaney of Eclipse for past due advances and royalties. The suit, filed in California Superior Court, was seeking $150,561 for money owed to Smith and four Japanese companies, and also sought $1 million in punitive damages to compensate Smith for “the malicious and oppressive actions and conduct of the defendants.”

Smith translated and packaged several Japanese books for Eclipse from 1988-1992, including Dirty Pair (licensed from Studio Nue), Appleseed and Black Magic (from Seishinsha), Lost Continent (from Akihiro Yamada), and Cyber 7 (from Shuppansha). The four Japanese companies assigned Smith all Of their claims against Eclipse, which is named the “alter ego” of Dean and Jan in the suit. Smith and his lawyer, Stephen Hollman of Pettit & Martin, declined to comment to the Journal, but the public record speaks clearly.

On Sept. 30, a judgment was ruled in the case stating, “IT IS HEREBY ORDERED, ADJUDGED, AND DECREED that judgment is this action be entered in favor of plaintiff, Toren Smith, and against defendant, Eclipse Enterprises, Inc in the amount of $122,328.59.”

Dean Mullaney then let Eclipse go bankrupt, and Smith paid the Japanese rights holders out of his own pocket the money that was owed to them.

We’ll return to the bankruptcy again closer to the end of this blog series.