This is a weird hybrid between Eclipse’s current strategy and their next. For a few years, Eclipse had almost abandoned their bread and butter: Monthly(ish) 32 page floppies, costing something around $2 a pop, and gone all in on albums and 48 page squarebound items, typically costing $6 and up. And they focused on adaptations of books and films.

In 1992, they would reverse this approach: Virtually all new series are 32 page floppies, and the adaptations are mostly gone. 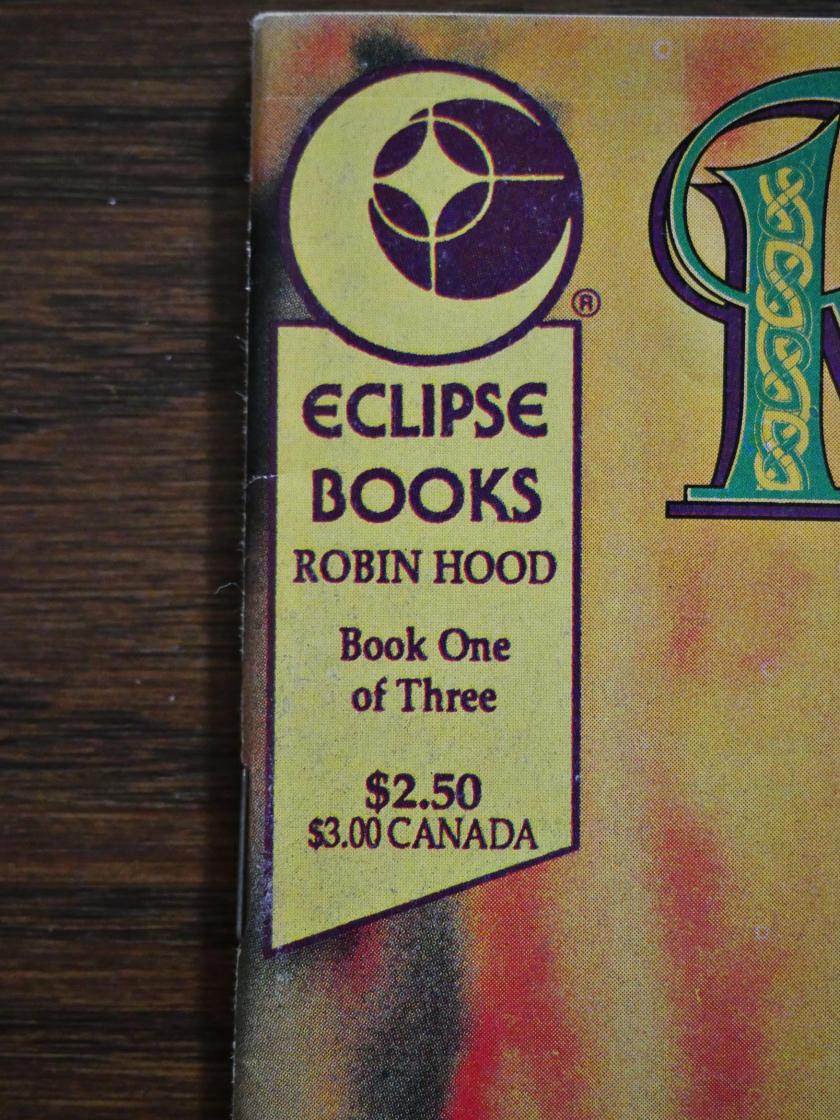 Half a year before this new launch, Eclipse apparently tests the water with this Robin Hood series. It’s got the new logo they’d be using variations of, it’s $2.50, it’s a 32 page floppy, and…

Ah! A penumbra! Since they’d cut down on floppies so much, it’s been weeks since I’ve read one of these. The only floppy they list “on the racks” is Miracleman #21. And catherine ⊕ yronwode recounts a funny story, that’s more amusing than they usually are.

ANYWAY! Robin Hood. The layouts are by Timothy Truman, but the artwork is by Christopher Schenck, which is an unfamiliar name to me. He’s painting in watercolour, I guess? Which makes printing it on absorbent matte paper a strange choice, because that’s no way to make these colours sing. I mean shine.

Was this originally fated for a single expensive 84 page volume on shiny paper, and then they changed their minds when they got the artwork?

Because, while the colours are on fleek, the figurework and the faces are, er, “traditional”. As in positively medieval from time to time.

But oh, the colours. I was immediately put off by all the wonky faces and figures, but there’s a bunch of really lovely pages in here.

Look at that blue cape! It’s the best blue cape ever!

The artwork really sings when he’s given an opportunity to do tableaux like this. Very appropriate for the story.

Oh, the story. I’ve only seen a couple of Robin Hood movies, and, er, the plot in this one is nothing like the plot of those. Well, OK, there are some scenes that are close to what I remember, but not the overall plot. So unless I totally misremember things (which is possible), this is a very revisionist take on the Robin Hood story, and I heartily approve.

Even if it was really confusing reading this, thinking I knew who the characters were and what their motivations were, it’s a solid story, well told. Over 84 pages you get a much meatier story than you’d expect, and Valerie Jones doesn’t achieve this by verbiage, but by good storytelling.

Eclipse used to have a couple of pages of back issue listings where you could order individual issues from all their series. They’ve apparently ditched that completely now, and just lists the graphic novels. 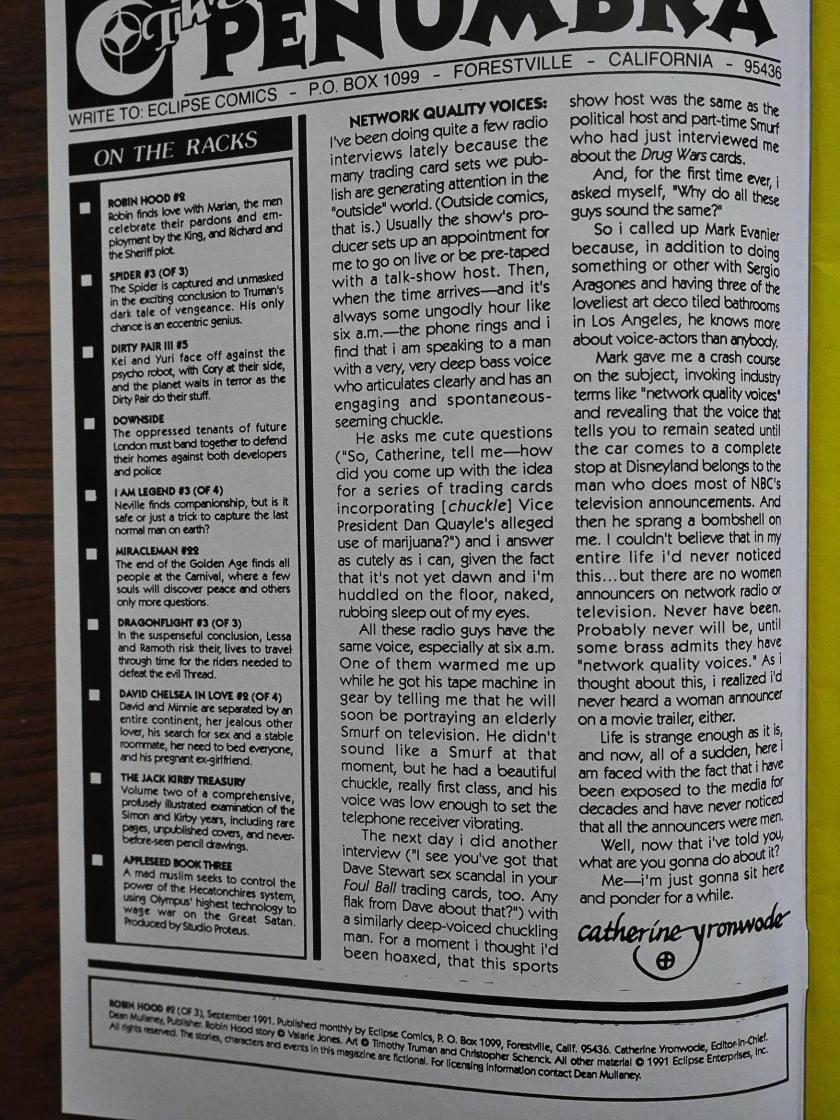 I just had to include that Penumbra too, because it’s something I’ve always noticed about US TV. It’s not that way in any other country I’m familiar with. I mean, having all TV announcers and voiceovers be men. Men with deep voices. It’s deranged.

Anyway! Back to Robin Hood. 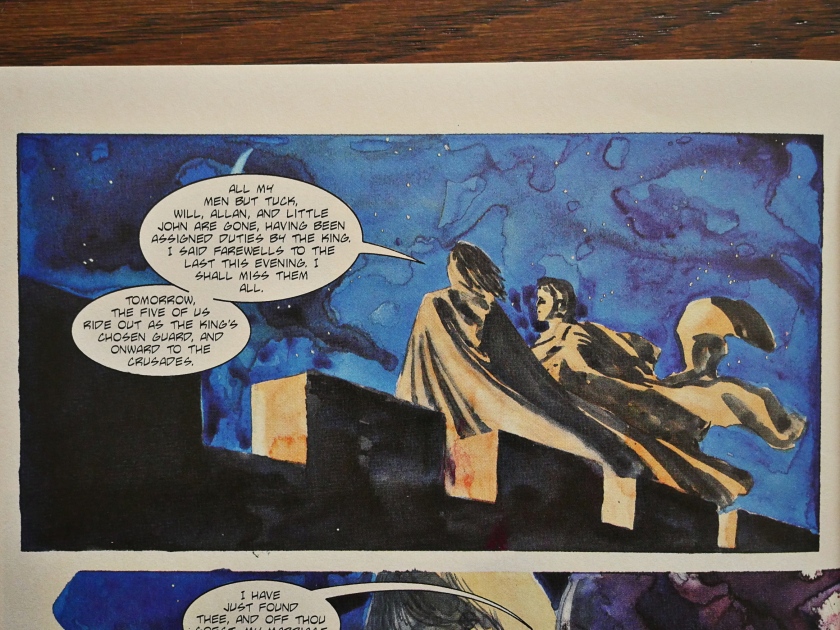 Look at that nighttime sky! Just look at it!

For the final issue, we have Truman doing breakdowns, Roger Petersen doing layouts, and Schenck doing the painting. I guess Schenck really, really hates everything other than putting colours down on the page? 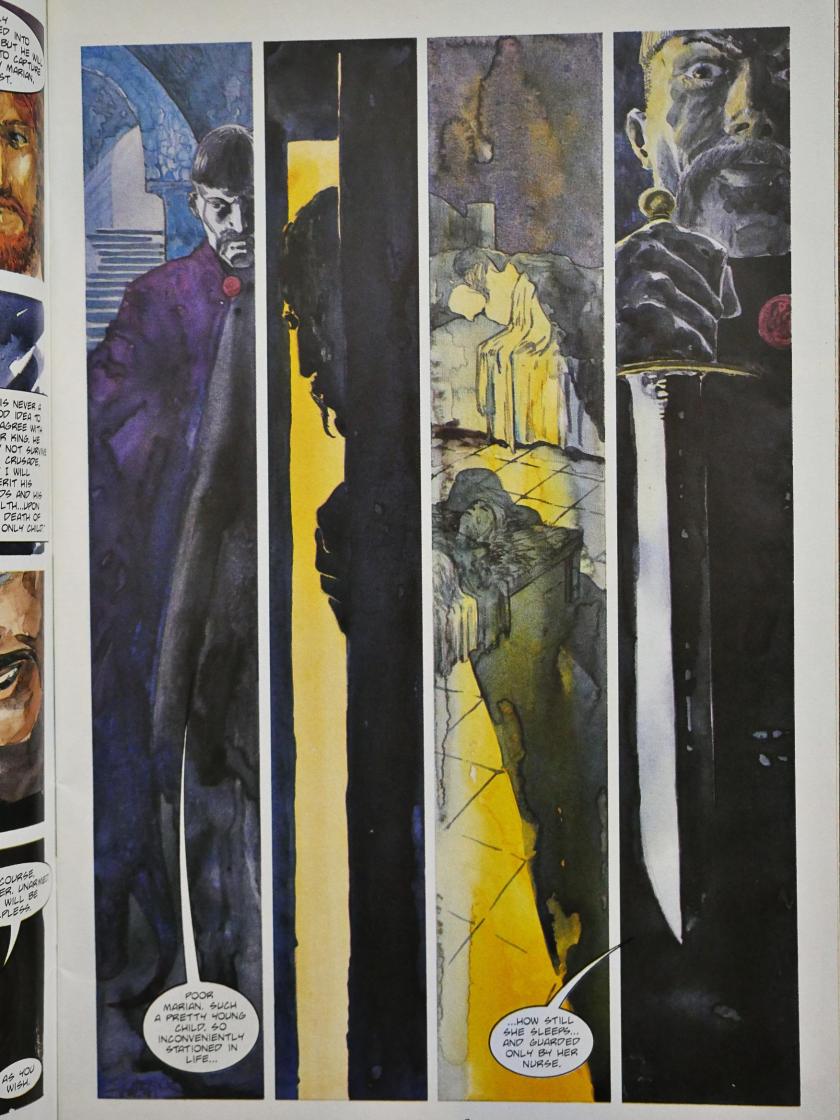 I think Petersen’s work makes a noticeable difference: The layouts get more architectural and the figures start having better anatomies. And the faces, even, are downright non-wonky.

This has never been reprinted, so I’m going to go ahead and guess that most people didn’t enjoy the artwork or the story as much as I did.

And I was unable to find anybody on the internet that they would even admit to having read it, so perhaps that’s the reason it’s never gotten a collected edition.