Eclipse had previously distributed a lot of books that reprinted newspaper comic strips (mostly published by Ken Pierce), but hadn’t really been involved with doing reprints themselves. 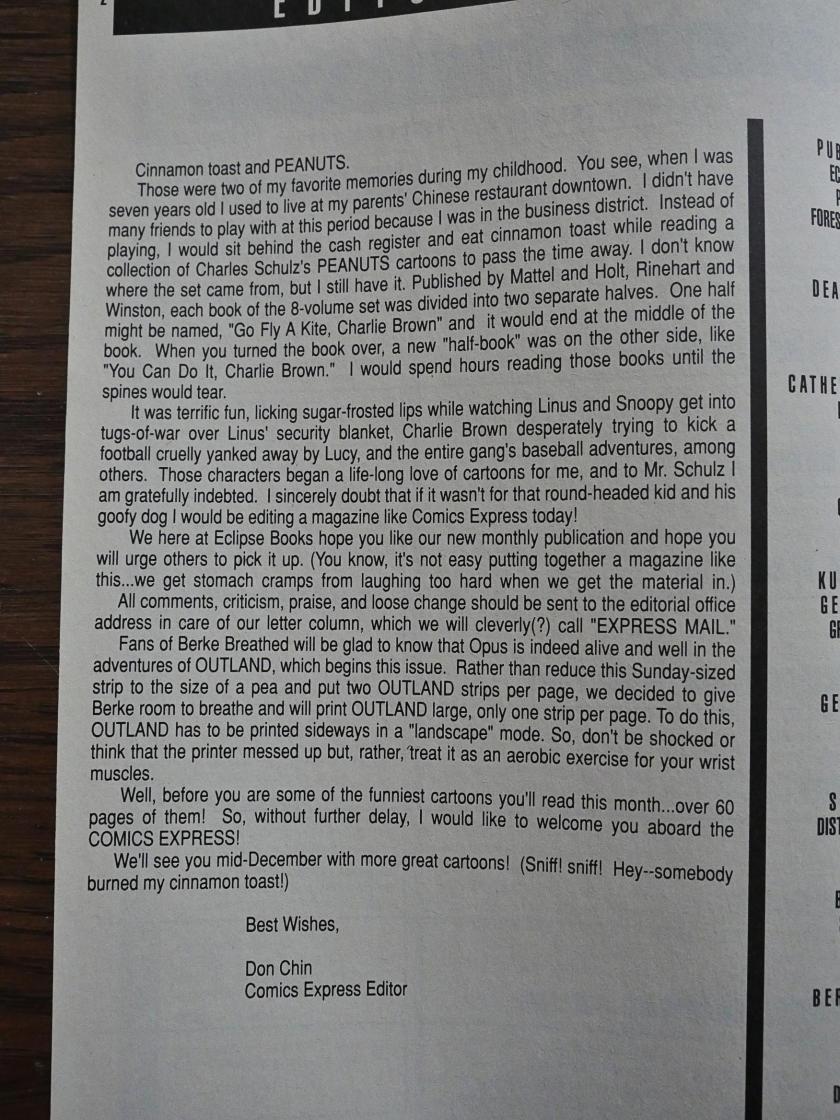 The editor here is Don Chin, the Black Belt Hamster writer. I guess Berke Breathed’s Outland is the major attraction here: He’s got the cover and lead-ins on both issues. 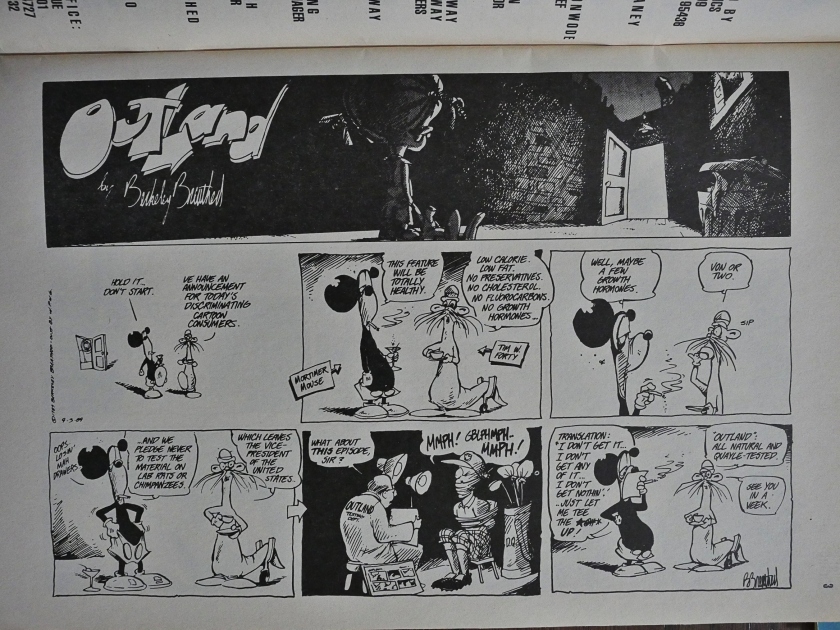 And his pages are printed sideways to give them more room. These are standard-sized American comic books, but are 64 pages, so it feels like a handsome little package.

While newspaper strip reprints have never really taken off in the direct market (but are huge sellers in the bookstore market), there’s one long-running monthly that’s been doing reprints since the 80s: Comics Revue. Looks like it’s still going, but it’s now a bimonthly. If I remember correctly, it has more of a focus on adventure serials, while this comic is humour only. 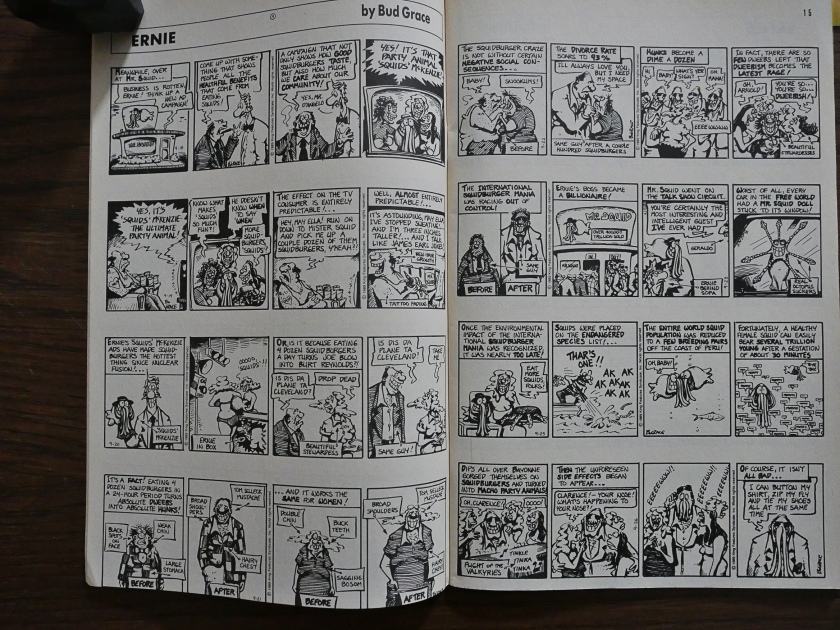 But it’s a pretty nice selection. Chin avoids all the boring old standards and reprints strips that were pretty fresh at the time, like Bud Grace’s Ernie. Which was a lot weirder and funnier back then than it ended up later.

The comic is pretty well designed and put together, but there’s the occasional sloppy production work, like on the page to the left above… 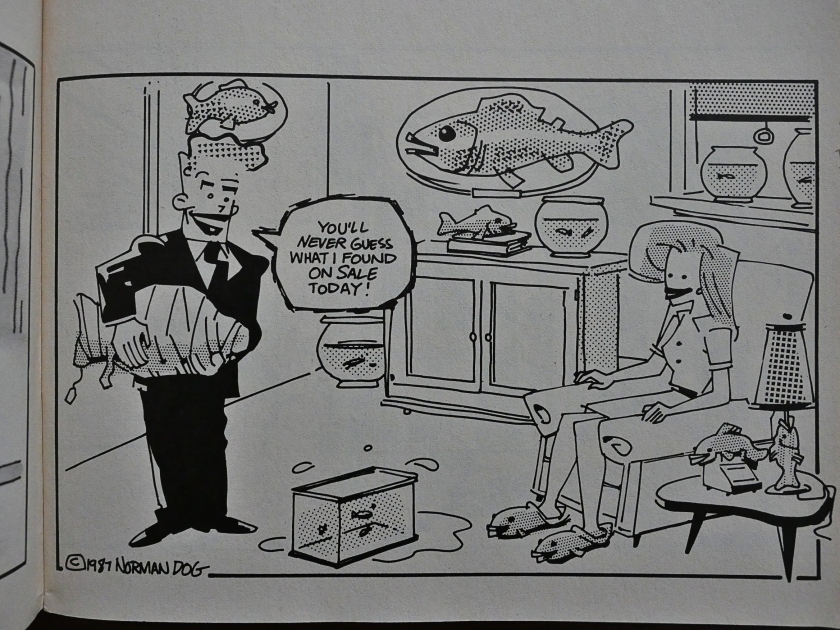 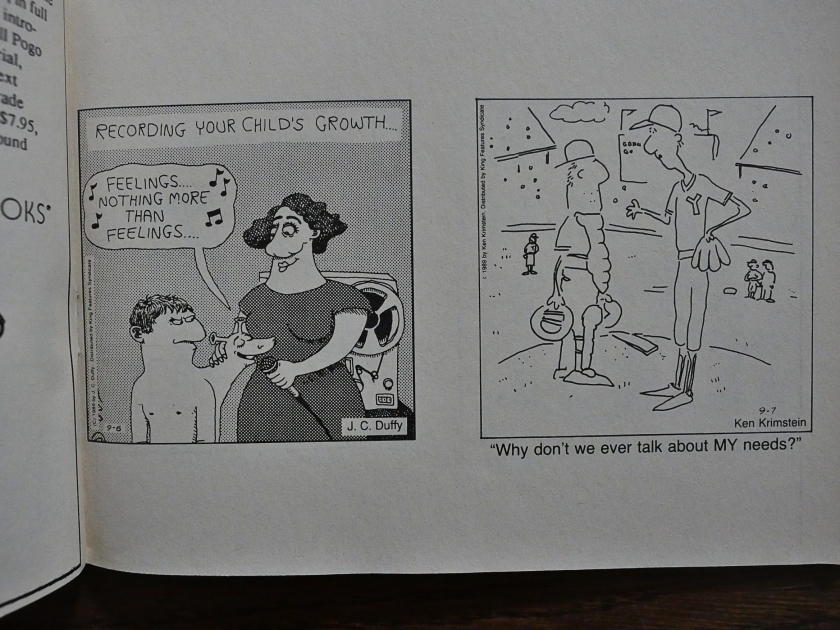 The New Breed are one-panel strips from a large variety of artists? Most of these aren’t very funny, but it’s not awful. 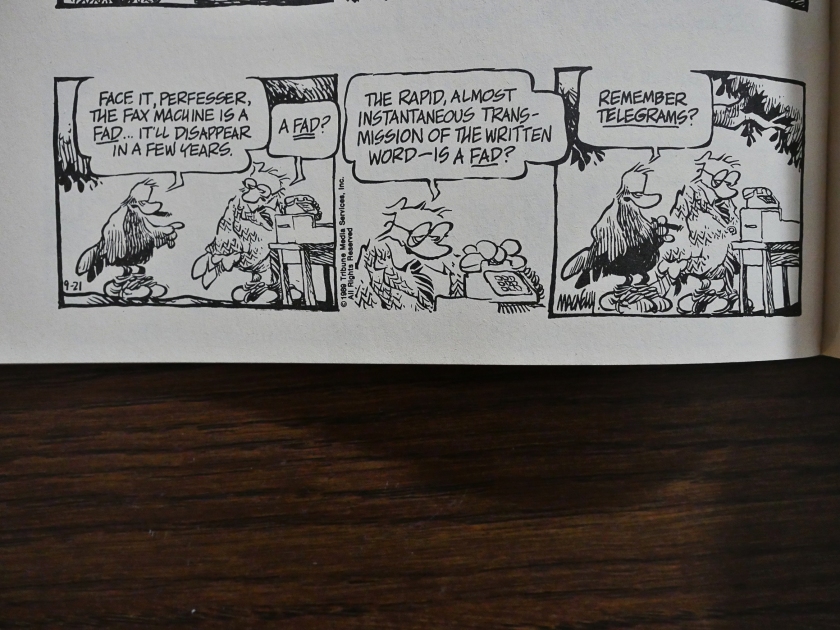 Jeff MacNelly’s Shoe is blisteringly unfunny, but he does have a nice line. 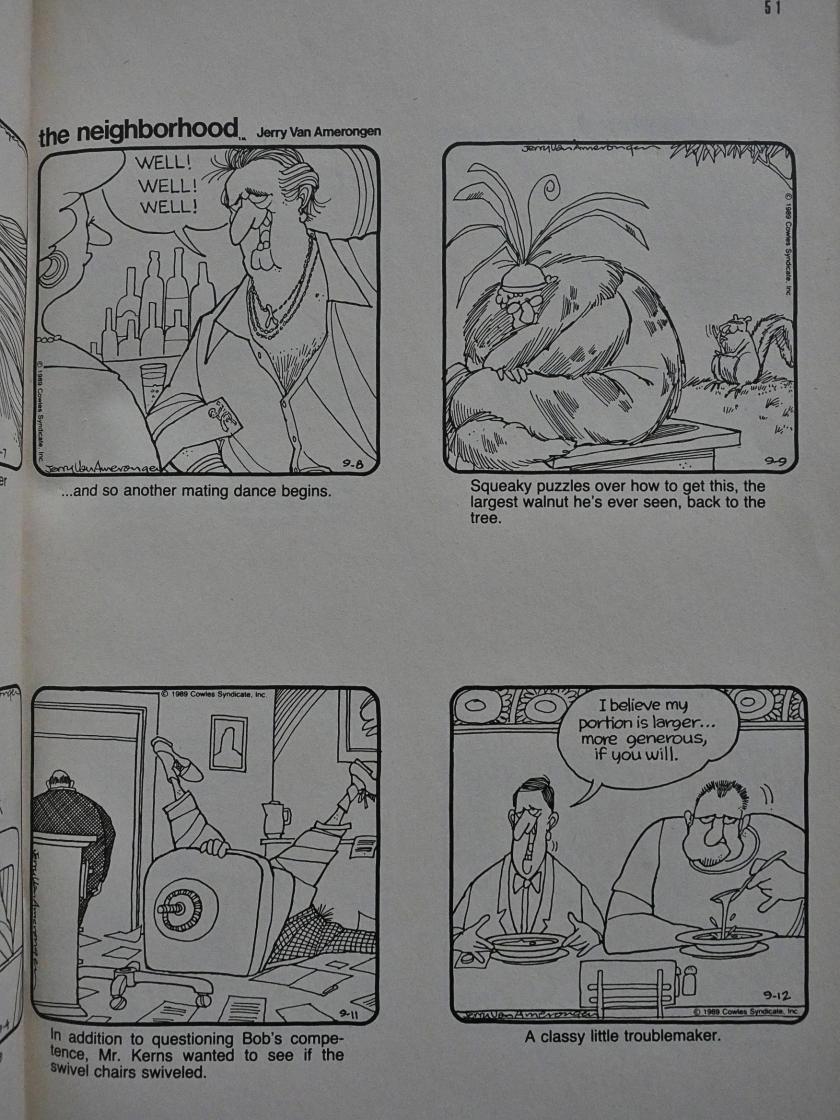 Jerry Van Amerongen tries to do The Far Side, and fails. 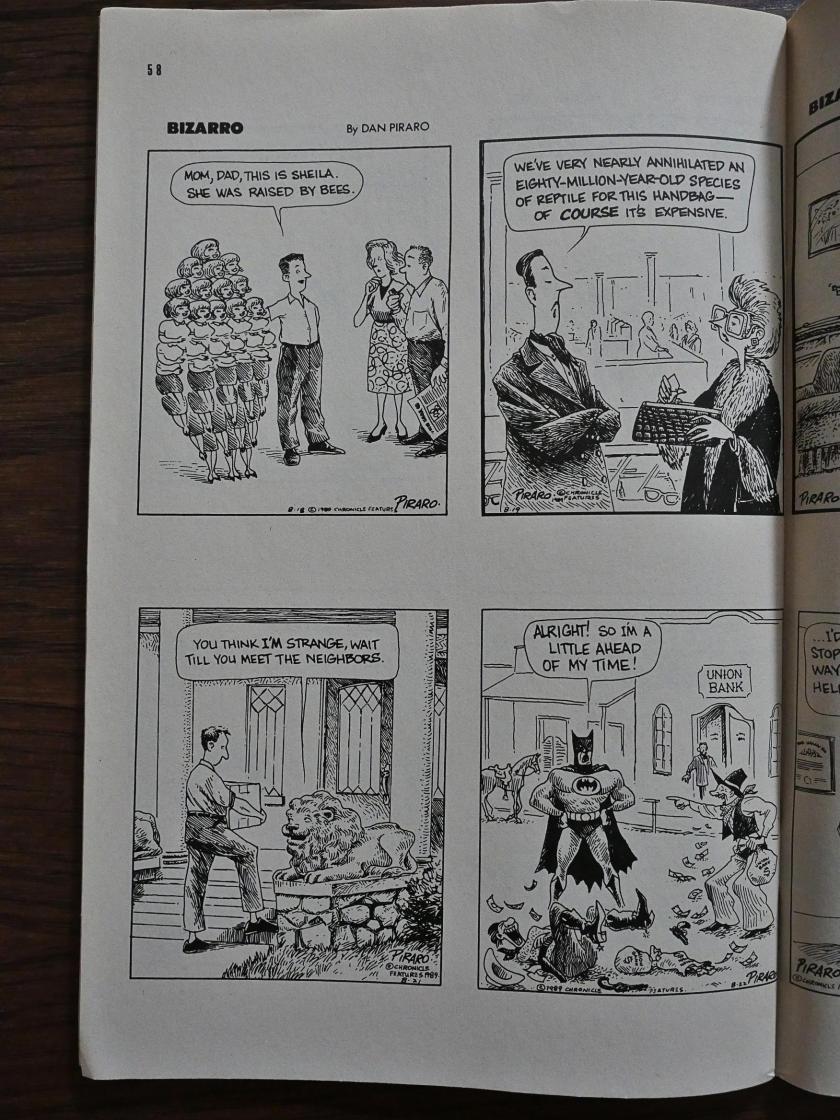 Dan Piraro kinda succeeds, and he’s still doing pretty much the same schtick to this day. 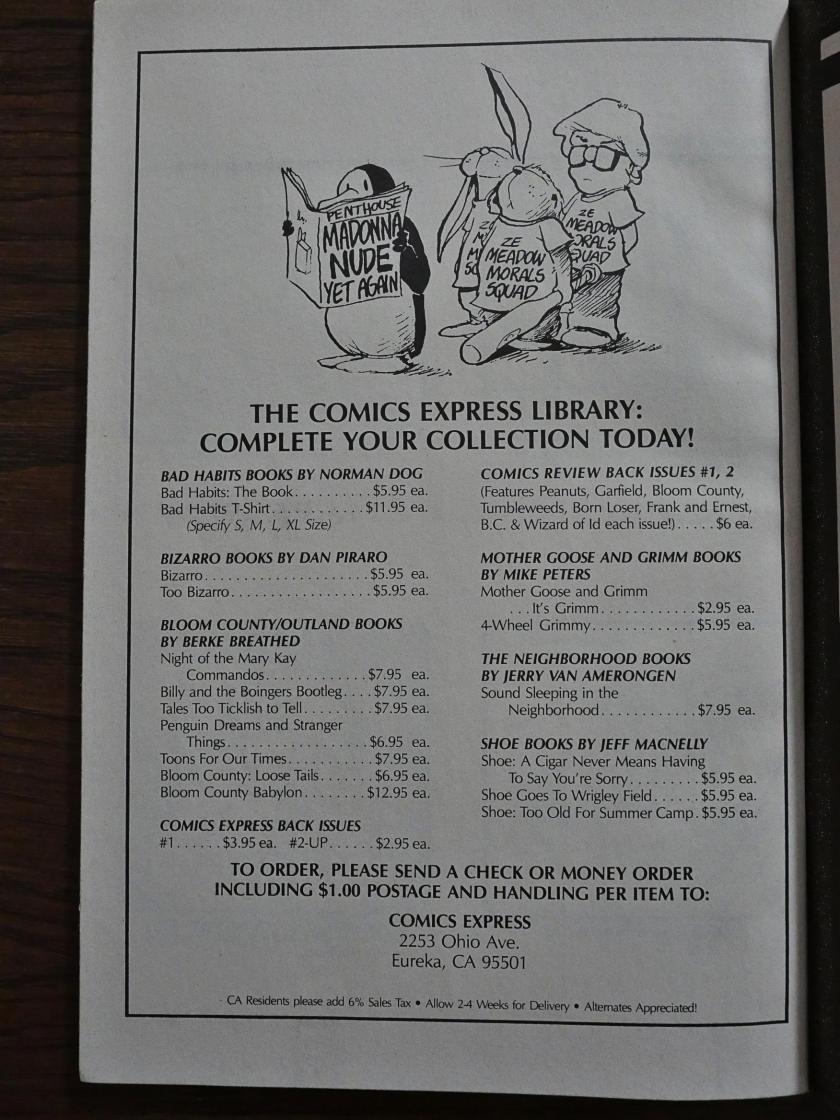 Huh. Did Comics Express publish a bunch of reprint collections as well? Or was it just a mail order outfit?

Anyway, as newspaper comic strips reprints go, I think it’s artistically quite successful. The strips included make sense to have together: They share a similar kind of humour, but have enough variety to make it a pleasant reading experience.

After Eclipse dropped the book (or whatever happened), Fictioneer took it over and published 24 more issues.