That’s a very minimal cover. I don’t actually appear on it; it’s just the reflections. 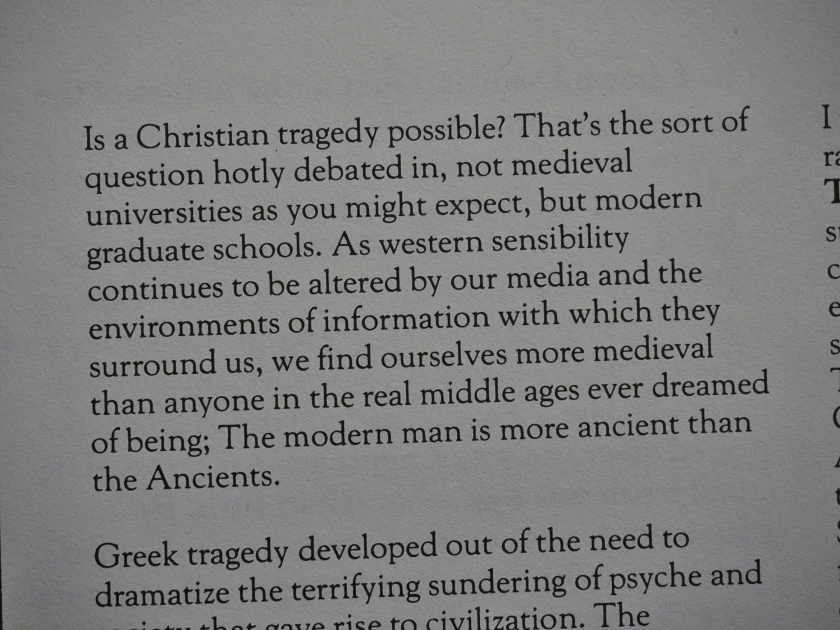 Eric McLuhan does the first introduction where he says that Christian tragedy isn’t possible.

Archie Goodwin does the second introduction, where he more sensibly explains the publication history of this work.

It was published in black and white in the 70s by Star*Reach. It was then rewritten, partially redrawn and fully repainted in the 80s for publication in Epic Magazine, where I think I read it at the time.

This graphic novel reprints that version on very white, non-glossy paper, and it looks very nice. Steacy designs the pages thoughtfully, using the placement of the panels to create nice effects, like when he goes from pages like this to pages that are “full bleed” (i.e., no white borders whatsoever) that opens things up panoramically.

I love Steacy’s use of purple on the pages.

And the colours are beautiful. But there’s a certain vagueness to his characters and faces that I’m not sure are really intended or are production artefacts.

Oh, the story? It’s about Catholics in space that encounter some alien tentacle monster and then have a total emotional breakdown. And this is shown by everybody shouting at each other all the time.

The text is all set in… uhm… Bodoni small caps? I guess? It’s a nice typeface, but it has very narrow stem widths, so it’s awful when set in black on white, because the ink will fill in the too-narrow stems, rendering the text hard to read.

The text is also glued down on the page in a sloppy way. It’s so weird: It’s obvious that there’s so much work that’s gone into this book, but then they haven’t cared enough to fix the placement of the text blocks. 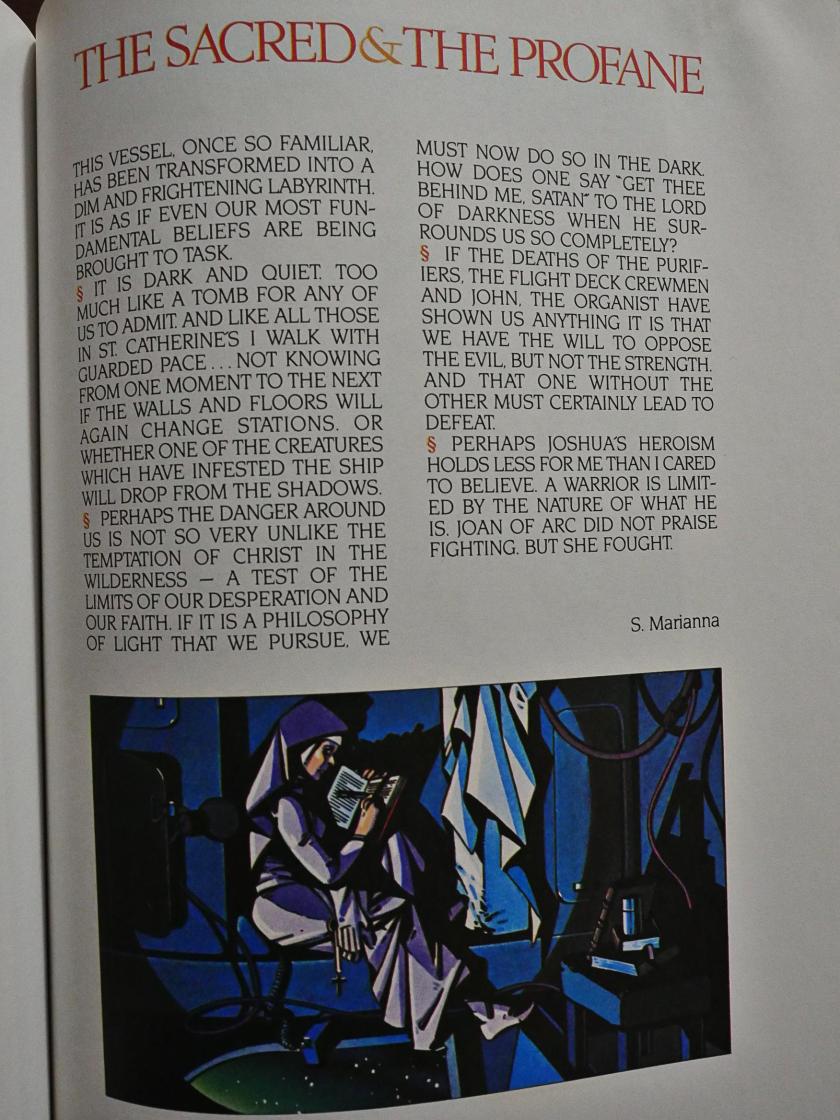 Oh, yeah, since all that happens in the book is people fighting the tentacle monsters and standing around shouting at each other, providing all the data we need is left to these text pieces that Sister Marianna has helpfully written. 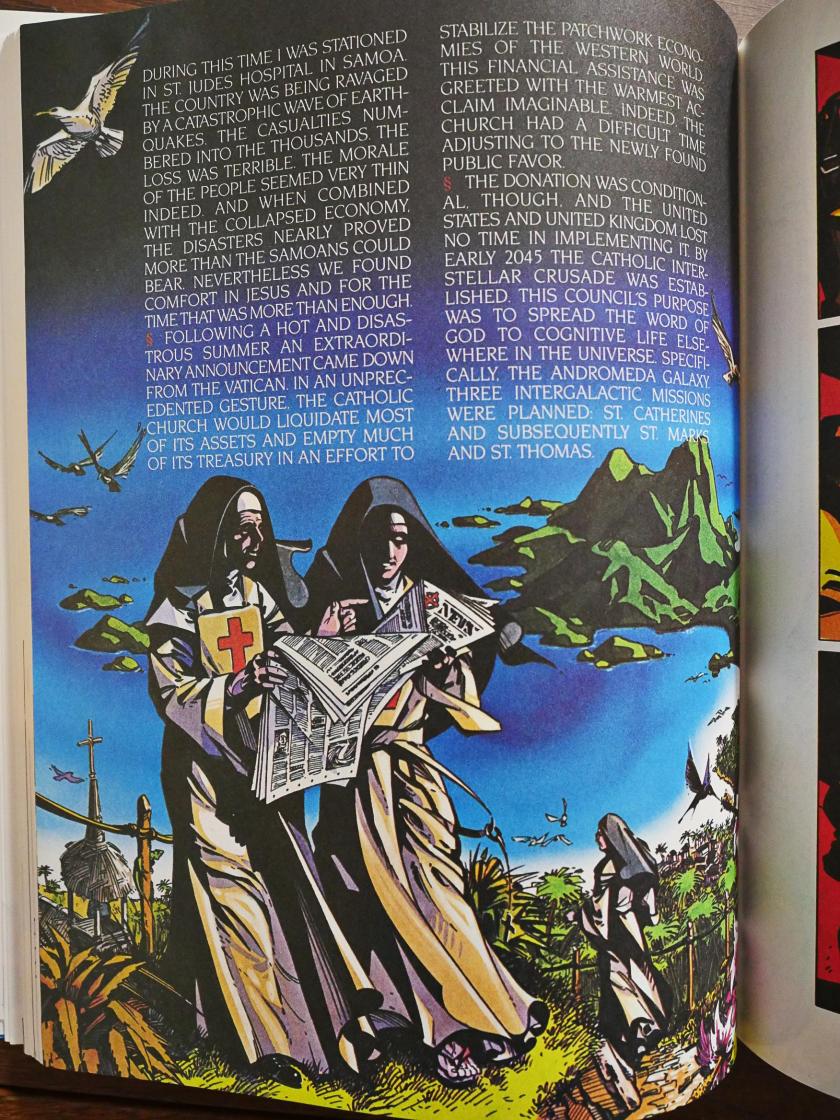 In the penultimate chapter, we even get the entire backstory of the spaceship (and the history of Earth) told in this manner.

And the weird thing is, it kinda works. Instead of being a crutch, it increases the tension.

So is it any good? It’s got plenty of troubles: Wall-to-wall clichés in the plot and dialogue, a self-conscious pretentiousness and a gravitas that the Church in Spaaaace thing doesn’t really warrant.

And, of course, Motter writes an afterword where he explains everything we should have gotten out of reading the book. 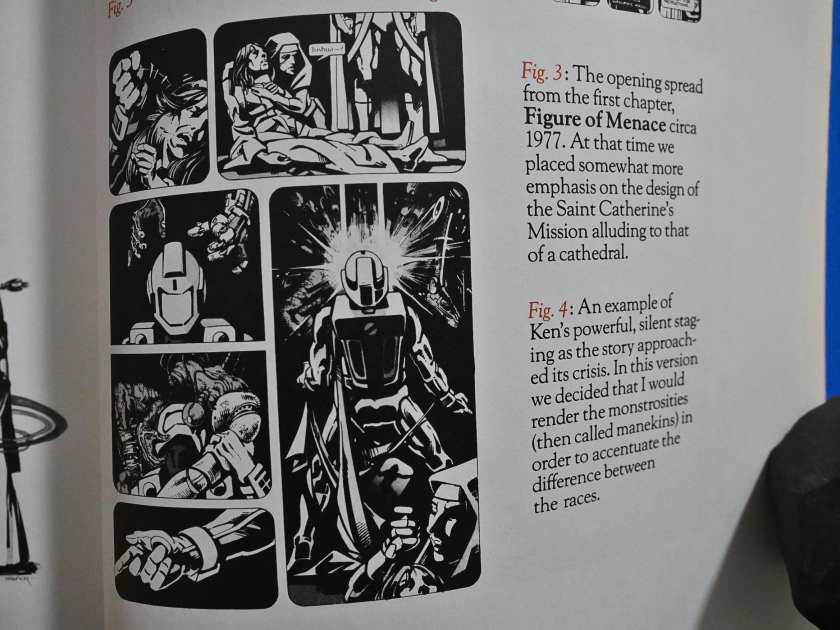 The pages showing Ken Steacy’s process are kinda fun, though.

And the premise, which I remembered from so long ago, is a winner: take a group of Catholic missionaries, project them into a spacefaring situa tion, and have them encounter a sentient life form. How does their faith withstand, and their theology explain, the staggering reality of non-human intelligence?

Academically, it’s about as urgent an issue as how many angels can dance on the head Of a pin; still, there might be, there should be, a story in it.

But as I reread The Sacred & The Profane in 1987, I realized with astonishment that Motter and Steacy don’t come within a country mile Of finding it. It’s amazing just how much of their story is stuff you’ve seen a scadzillion times before: starship maneuvers, scary-but-misunderstood aliens, Grade-Z melodrama. It’s a startlingly shoddy piece of work. (I’ve seen a few “Doctor Who” adventures with nearly the same plot, and much wittier handling). In his selfcongratulatory afterword to the volume, Dean Motter, bristling with pedantry, explains to us poor slobs that the story is structured according to guidelines set dmvn by Cicero in De Orator. He does not, however, go on to explain the errors in spelling, punctuation, and elementary grammar that smear the work from start to finish. (And there ought to be a Hall of Shame for comics scripters who insist on writing science-fiction without possessing even a basic knowledge of astronomy in The Sacred & The Profane, the starship St. Catherine goes on an “intergalactic” mission, but when things get tough, they consider high-tailing it “back to the solar system.” By way of NeverNever land, I suppose.)

As aliens infiltrate the ship, the stressed relationships of the crew members provide Much Drama—we get to read dialogue like, “Listen, you slut! I saw you with that technician this afternoon..” I wonder if Motter realizes how funny— almost camp—all of this is?

I think he liked it!