I didn’t read this book when I was a teenager, for some reason or other. I was a great fan of its sister publication, The Dreamery, and I loved Gallacci’s Albedo Anthopomorphics, so that’s a mystery.

Since this was presented as The Dreamery’s sister publication, and that’s an anthology, I thought Fusion had to be an anthology, too.

But it’s not really: Its lead feature (about the crew of a starship that goes on adventures and get into trouble) command the vast portion of the pages. Since anthologies traditionally are harder to sell than single-feature books, I wonder why they didn’t stress this feature of the book more.

Anyway, the main artists on this main feature are Steven Gallacci and Lela Dowling. Gallacci is most famous for his Erma Felda, IDF and Albedo series, while Dowling is a successful fantasy illustrator, and was also publishing things like the Alice in Wonderland adaptation over at The Dreamery.

The storyline is arranged into three-to-five issue arcs, with different authors contributing various bits. The first arc is by Steven Barnes, the science fiction author. The story is perhaps less than well-constructed, with the first issue mainly being taken up by various bar brawls and other scenes that don’t really contribute all that much to the plot that’s to follow. But it’s fun enough, and it’s low-level amusing, like the panel above. I mean, it’s writing on auto-pilot, but it reads well.

I wouldn’t really have guessed from the artwork that either Gallacci or Dowling had been involved. It looks like none of them. They’ve sort of melded into a third person with a different style. Dowling’s style is perhaps the one that emerges the most, but she keeps her signature designs only to certain characters, like that cat one above. That’s Dowling, all right. 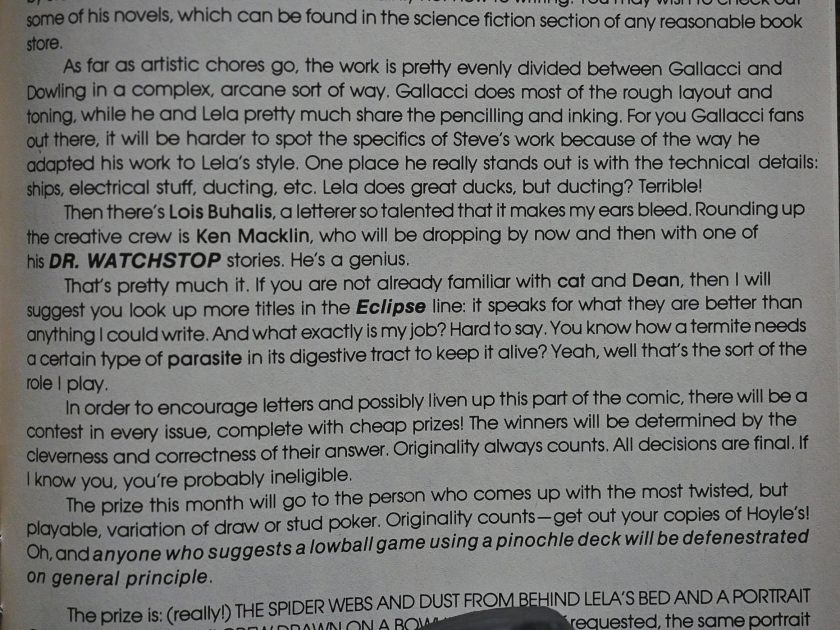 The “conceptual editor” is Lex Nakashima, and he was apparently the one who came up with the concept, and he owns the trademark and the copyright to everything in the book, which is very unusual for Eclipse. Did Gallacci and Dowling do this “work-for-hire” style or something?

But even if this isn’t an anthology, there’s room for backup features in ever issue. Ken Macklin provides about a third of them with his three to six page Dr. Watchstop character. They are gorgeous and amusing, but pretty slight. But as he does all the pages in this style (two vertical panels), it’s hard to get a lot of substance in.

I love Gallacci’s series, but one of the frustrating thing about his books is that he has a tendency to not bother to put any backgrounds in. In this book, too, he vacillates wildly, but there aren’t many pages that look this unfinished. Perhaps this was just a production snafu? 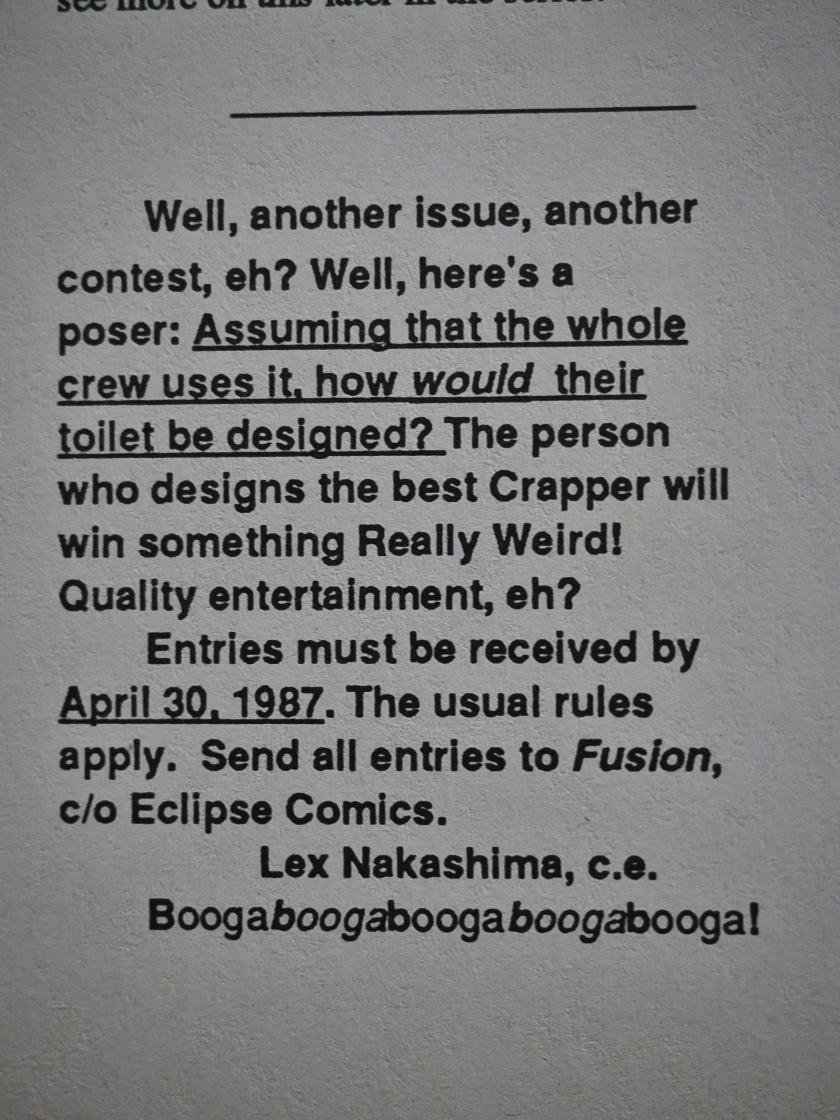 As in The Dreamery, Nakashima has a new competition every issue. Not all the competitions are as exciting as this one, though. 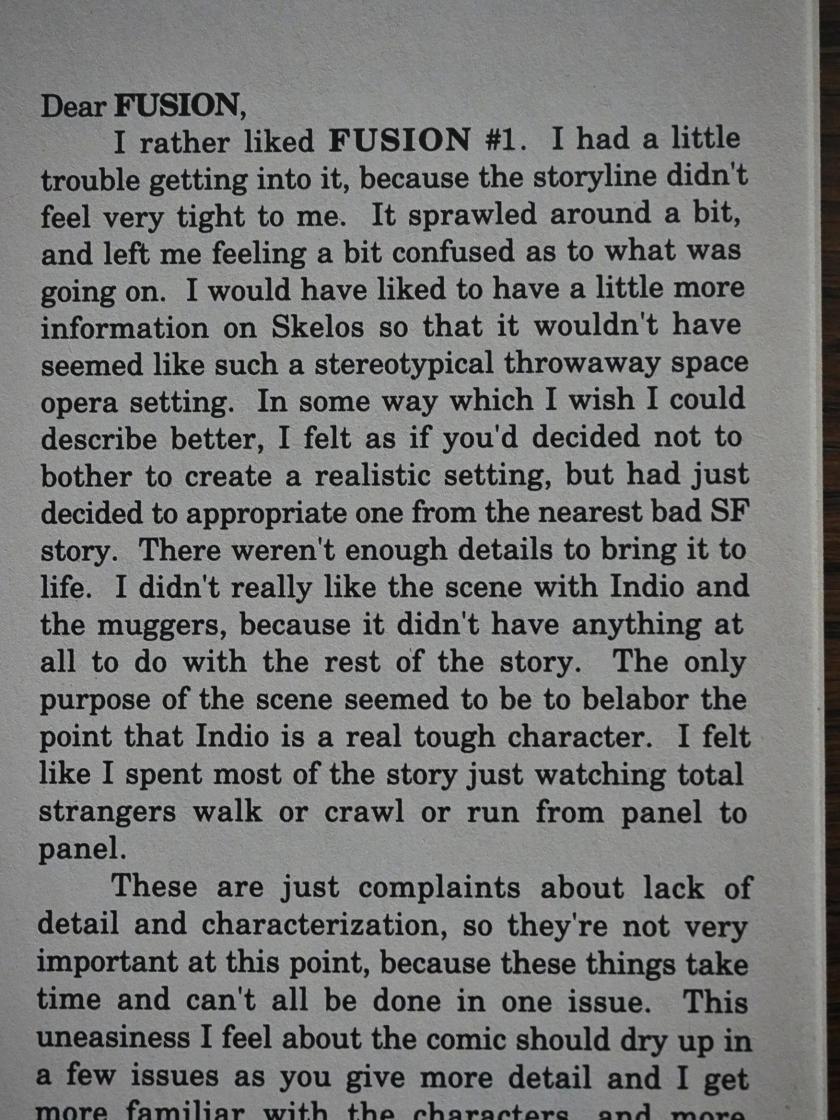 The letters pages are quite lively. Many of the writers are critical, especially with the storytelling of the first arc. And I agree, it wasn’t ideal: Too many characters and concepts being dumped on the reader, but without really creating a feeling that we’re being immersed in a well-imagined universe. There were many stock set pieces that could have been in any sf story.

The real pleasure, though, is in the humour and the artwork. How can you not love that otterly adorable creature?

Nakashima was really embarrassed about doing the toilet competition, so he doesn’t really publish any of the responses. Boo! 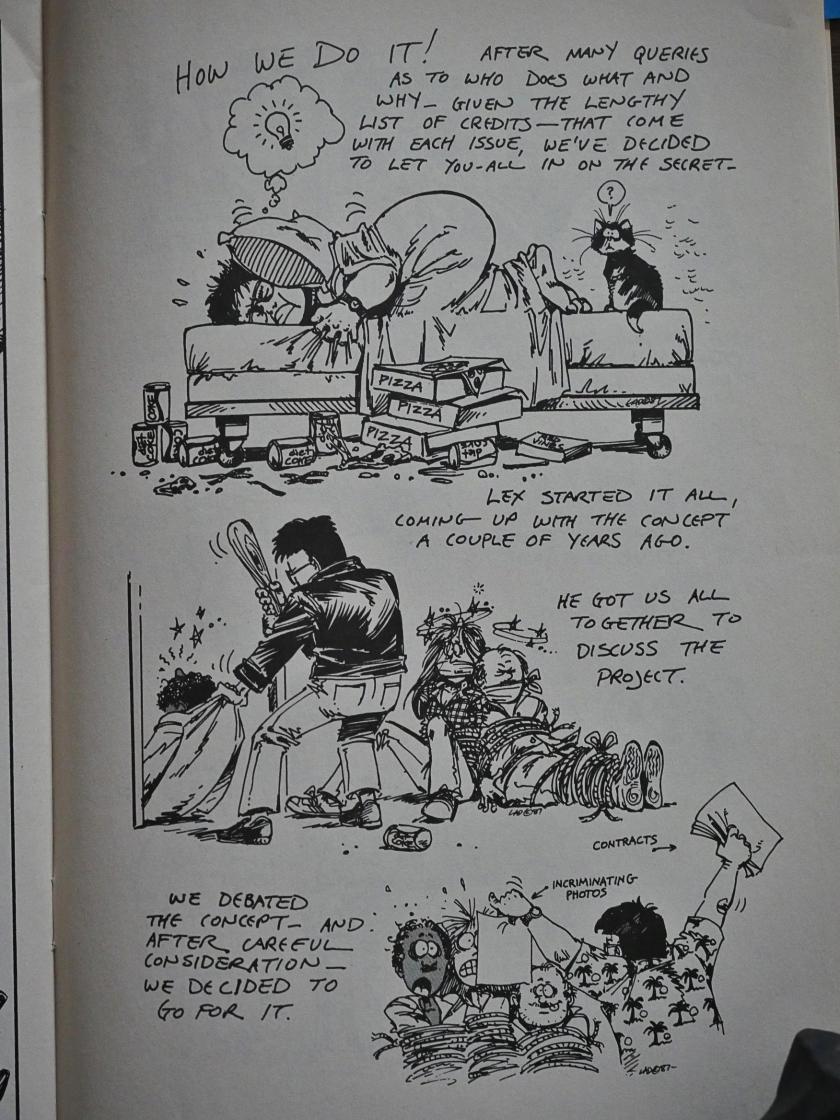 But! We get a bonus instead where we get to follow the creative process.

The interesting bit here, I think, is that apparently Gallacci photocopies the artwork (after Dowling has inked it), and then does the airbrushing (or washes) on that photocopy. I guess it’s done that way because it’s too easy to make a mistake when airbrushing? 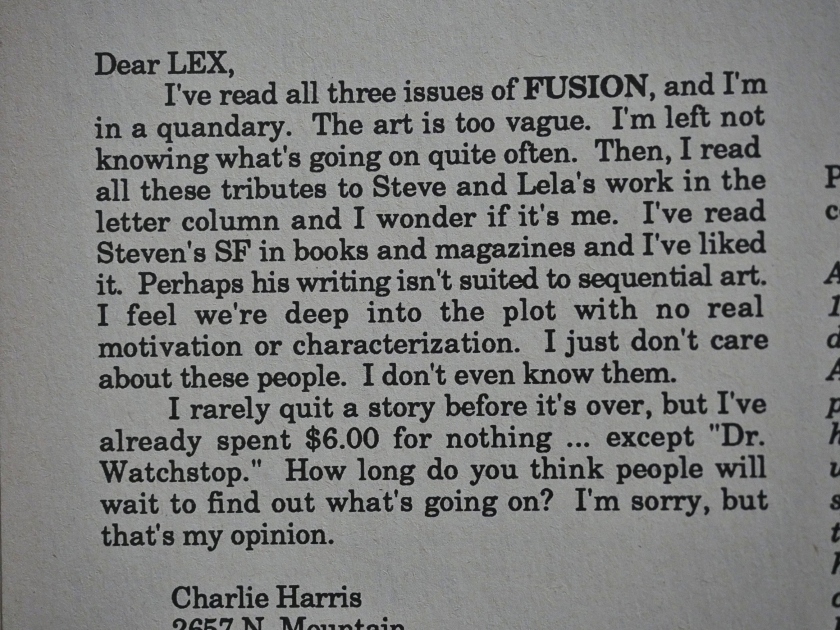 But! We get The Weasel Patrol, created by Ken Macklin and Lela Dowling, as the other backup feature, and they appear in most issues where Dr. Watchstop doesn’t. It’s probably the funniest part of the entire Fusion package.

After every four or five issues, Gallacci and Dowling gets the issue off, and we get various fill-in writers and artists. Here’s Larry Dixon.

One of these are better than the others.

Ironically enough, a reader writes in to ask what the “Films by SM graphics” in the indicia means, and Nakashima explains that they’re the company who shoots the original artwork and prepares the negative for the printer, and they’re really good (and cheap). And that’s the issue where one third of the pages are shot way too lightly, so it looks like it’s been printed with grey ink instead of black.

Gallacci takes over the plotting with the second arc, and things get sillier, as several characters enter mating season.

This is an anthropomorphic comic, so you get the inevitable “what’s food and what’s not” gags. But it’s cute.

For the last eight issues, Joe Pearson and Dave Simons contribute double-page spreads like this. How could a book like this afford an expenditure like that? But it does bring a feeling over “overflowing horn” to the series, so perhaps it helps with readership retention.

We get the inevitable Dr. Watchstop/Weasel Patrol crossover, and it’s just as good as you would imagine.

What doesn’t help are the fill-in issues. None of them are horrible or anything, but the artwork is seldom more than serviceable (here’s Pearson, Tim Burgard and Simons).

Calling that “original pages” is… er… I think they could explain better just what they’re selling here.

So one detrimental factor are the fill-in artists, but on the final arc, they have a bewildering array of writers, too. The editorial pages doesn’t explain this at all. So here we get Peter Morwood with Michael Reaves…

Then next issue there’s Morwood with Brynne Stephens… 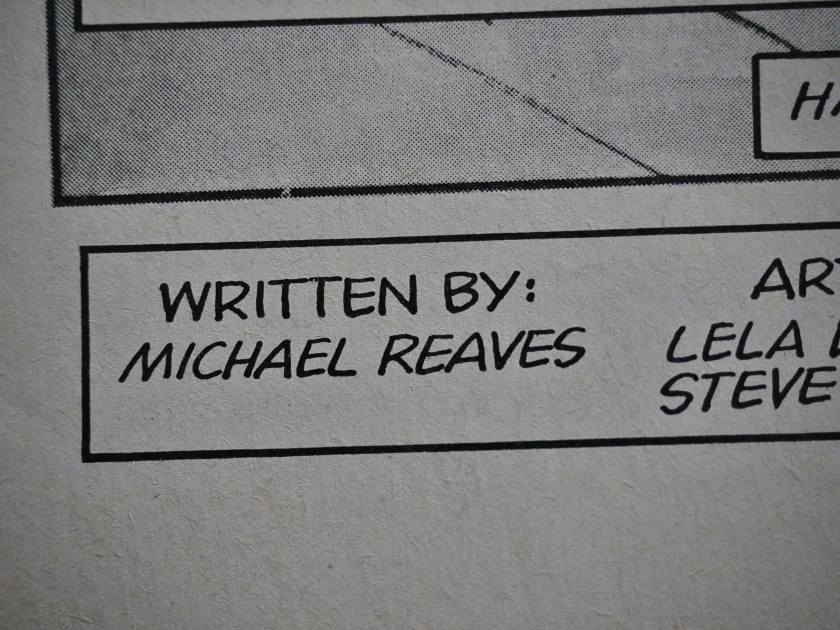 And then just Michael Reaves?

And then… Oh, just read it yourself.

You’d imagine that this would take a toll on the consistency of the storyline, but the new writers have to have been briefed well, or the editor fixed most of the errors after the fact.

But still, there are glitches like this. She got pregnant in the Gallacci-written issues, and she was completely sure that she wanted the chicks. But now she’s unsure all of a sudden.

At least Gallacci/Dowling are back on the artwork, even if they’re not writing it.

We also get more solo weirdness from Dowling, which is nice.

For the last half dozen issues, conceptual editor Nakashima doesn’t appear in the letters pages at all. Instead they’re compiled by Gordon Garb, which makes me wonder whether the editor had slightly lost interest.

Gallacci writes the final two issues, and things return to the normal abnormalities, which is nice, but by now, things have gotten kinda scattershot, and the storyline has lost most of its momentum. It’s fun, but we’re treading water.

A Weasel Patrol special by Dowling and Macklin is announced, and Dowling does this homage to Stig’s Inferno as the ad. Nice!

Around this time, room temperature fusion is announced. It later turned out not to be a real thing, but we get jokes like the above…

Larry Dixon returns to do the artwork for the final issue.

And the production manager announces that Fusion has been cancelled. Dowling is adapting Anne McCaffrey’s Dragonflight novels into a comic book series, and besides, Fusion is apparently losing money. I wounder who’s footing the bill. Nakashima?

“You, our readers and fans, hanve made it clear to us that you prefer Steve and Lela’s art to that of any other artists we’ve tried.” Indeed.

So that’s it: It’s a fun book, well worth seeking out. The main feature has been reprinted in three volumes by About Comics recently. But it’s not a completely satisfying series, because it reaches nothing that even vaguely reminds you of a conclusion. Not that there was much of a feeling that it would: It could probably have gone on forever. 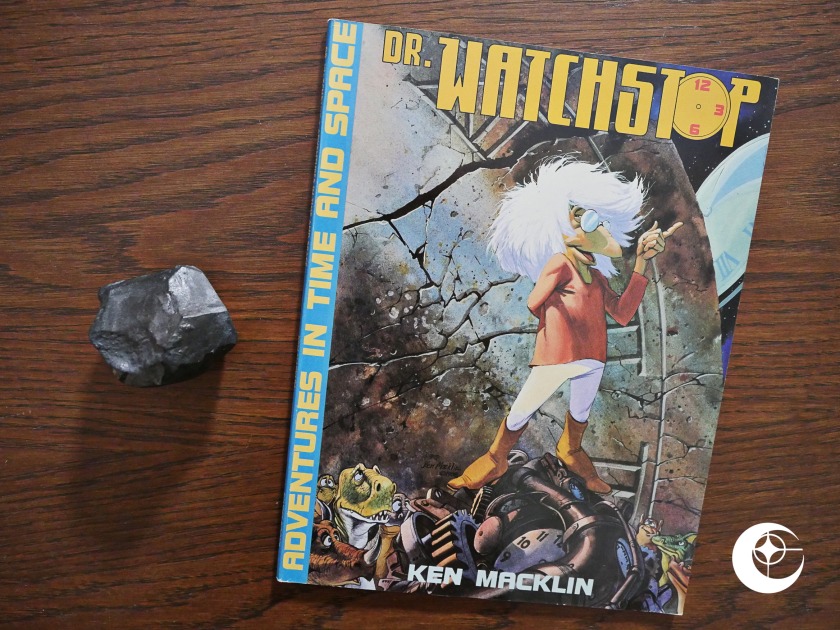 So then we have the two spin-offs. Well. The first one is just a reprinting of Ken Macklin’s Dr. Watchstop strips. 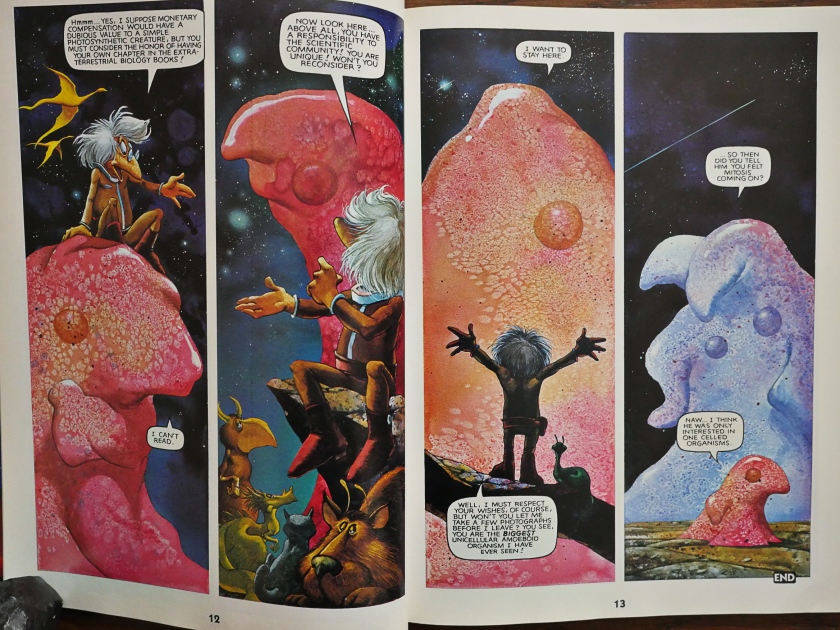 Half of these pieces were originally published in Epic Magazine (published by Marvel Comics). They’re all in the same style, and they look great on these glossy, vibrant printing. Mostly four-ish pages, and they all have a somewhat humorous twist ending.

The rest of the pieces are reprints from Fusion, and these are in black and white. But the larger size and better printing makes then look lusher and nice.

The other book is a proper spin-off: The Weasel Patrol in their own comic book.

The longer format gives Dowling and Macklin more room for their silliness, and it works great.

Oh, that’s such an evil scheme. 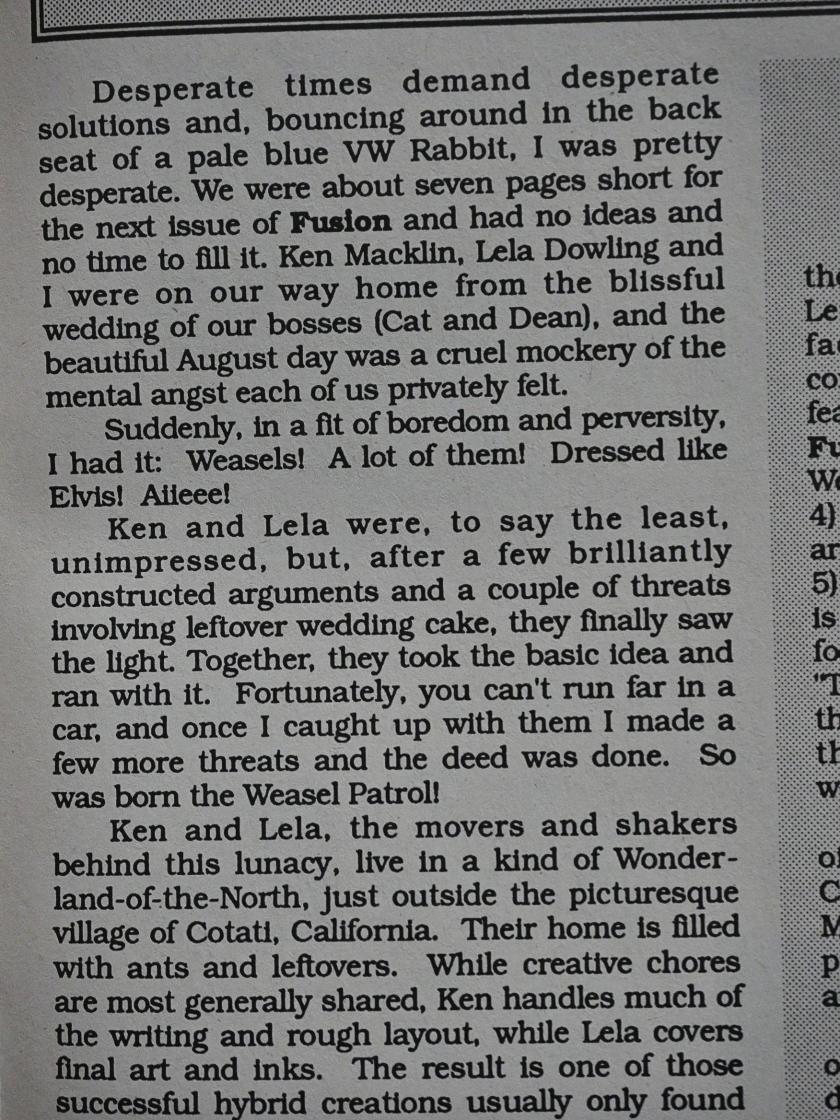 Conceptual editor Nakashima explains how the Weasel Patrol originated. He created the characters himself, and then turned them over to Dowling and Macklin.

It’s a fun book, and unsurprisingly enough, About Comics has released a hundred page book that presumably collects both this book and the shorter pieces from Fusion.

[Edit: An anonymous reader has let me know that a Nicktoon pilot was made, but it was never picked up.]