In the midst of the black-and-white comics boom of the mid-80s, we get a series that’s probably not part of that cynical speculator’s craze. Instead it seems like Lex Nakashima’s earnest dream project: A pair of old-fashioned great anthologies. This one, The Dreamery, focuses on humour and whimsy, while its sister publication, Fusion, is about… er… furry sf? I haven’t read it yet!

That is, I haven’t read these books since I was a teenager, and I loved this book to bits back then. I don’t really remember much about Fusion, but I guess we’ll find out tomorrow when that blog article goes up.

The reason I’m featuring the indicia up there is that apparently “LX, Ltd” (which I guess is just Lex Nakashima) has trademarked “The Dreamery”. That’s rather unusual for a small-time comics anthology. You get the feeling that he had grand plans…

I love Donna Barr’s Stinz comics, and she’s (and he’s) in almost every issue. It’s about these half-horse peasant valley Germans from the early 1900s. That sounds awfully high concept, but these are very down-to-earth stories in execution. Barr’s artwork is always super-energetic; the panels are always bursting with action and people are usually shouting at each other. How she manages to do this without exhausting the reader is a mystery. 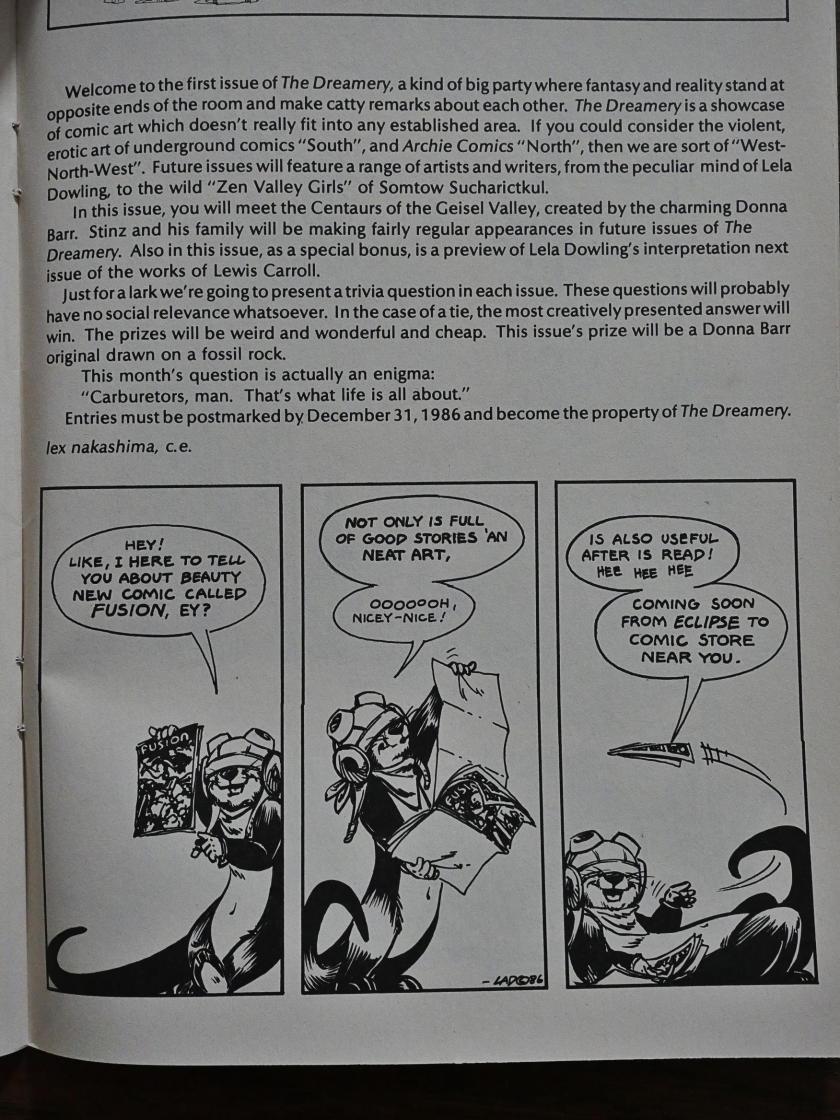 Lex Nakashima is the “conceptual editor” of this book. I have no idea what that means. Perhaps he’s the guy who got these people together, but he doesn’t do any of the practical stuff, like bug people about deadlines, or proofread anything? I have no idea.

The other major contributor to The Dreamery is Lela Dowling. And let’s face it, she’s also the major commercial draw. She was, even back then, a pretty famous science fiction/fantasy illustrator, most known for her dragons, I think. For The Dreamery she did only adaptations of other people’s writing. Here’s Jabberwocky by Lewis Carroll. When she does the adaptations all on her own, they’re wildly incongruent with what the writer probably had in mind, which makes them all the more fun to read.

And that beautiful artwork. Man. The only slight quibble I have is that her grey washes sometimes makes it difficult to pick out what mayhem is going on. It’s usually not a problem, but some of the Alice in Wonderland “panels” can be confusing until you get it. At least in the first section; perhaps she wasn’t used to this kind of reproduction?

Of course, with a roster this delightful, the letters pages gets a lot of action from overjoyed readers. But to put things in overdrive, most issues also have a competition where you can with Big Prizes.

I think you can perhaps say that The Dreamery and Fusion mark the end of something for Eclipse. It’s the final series of original material they published that went into double digits. (Their next commercial successes were reprints of Japanese comics.) I’ve reached the halfway point in this blog series issue-wise, but have only done one third of the titles.

These are the final comic book series (with original material) that Eclipse will start that went on publishing for a noticeable stretch (over two years). From now on out it’s just Japanese comics, mini-series, failed adventure series and graphic novels.

Oh, there was a preview of The Dreamery in Zell? Is that the book that Steve Gallacchi published? 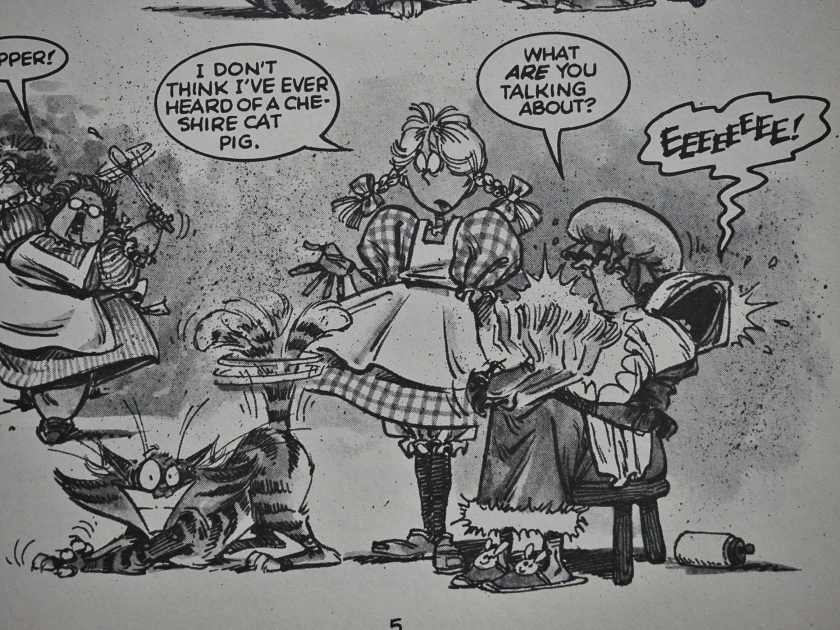 Of course Lela Dowling draws the best Cheshire Cat ever. 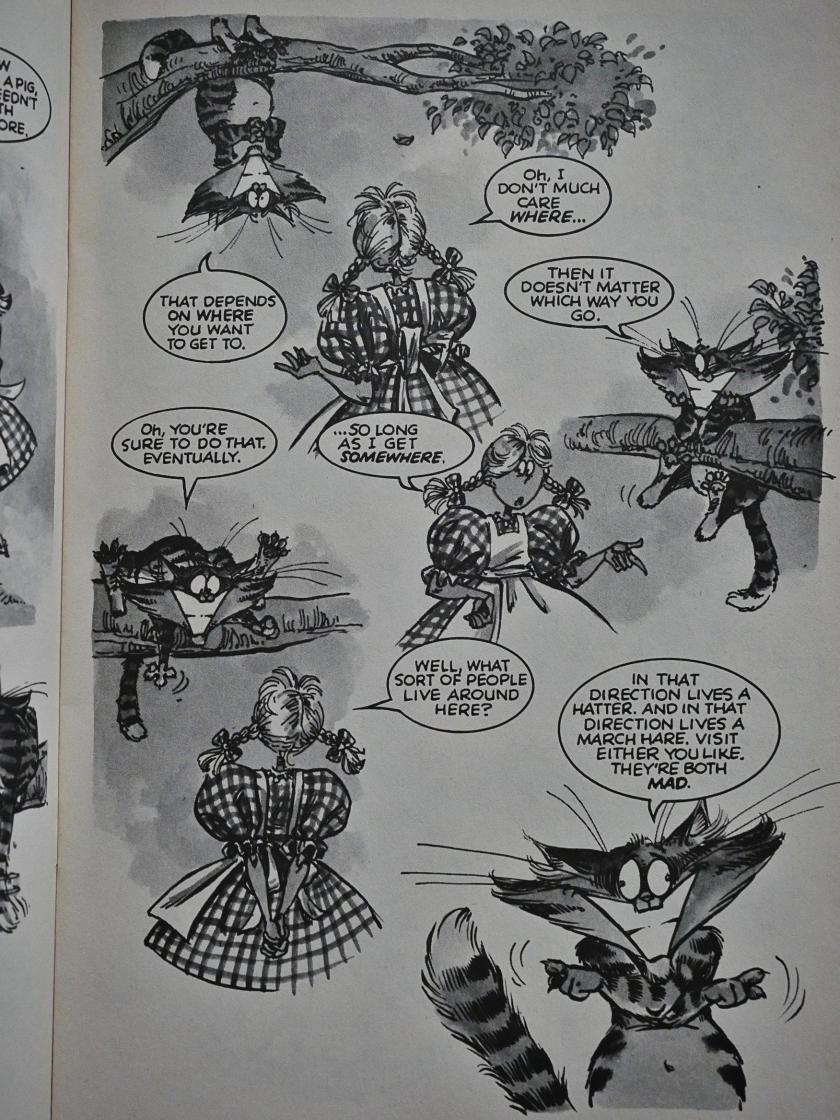 And apparently her husband is doing artwork for the sister publication, Fusion. Keeping it all in the family.

These issues are pretty jam-packed, but occasionally they find room to print some sketches and nonsense. 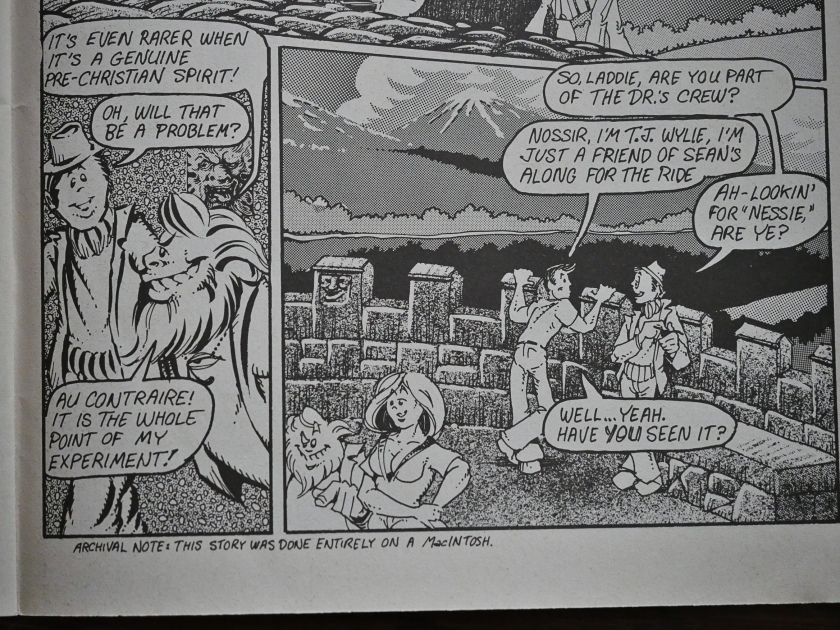 The only problem with this series is that the issues are too short. When you’re doing an anthology and only have room for about 28 story pages, after slotting in the regular features, there’s no room for surprises. And most issues that had Alice in Wonderland, that ran for more than 20 pages. I have no idea why they didn’t spread it out longer. Perhaps they didn’t think the series would last that long?

Anyway, there’s room for a few short surprises, like the Phil Foglio short (and groan-worthy, but in a good way) story seen an excerpt from above. “This story was done entirely on a Macintosh”? Hm. I guess he meant that he scanned in the artwork and then perhaps did the tones and stuff on the computer? Because those lines look very much like ink lines.

I can’t resist including this Mock Turtle page. That joke is just so bad, I love it.

And then it’s over in the 7th issue. What now?

Well, we get more random bits, like this Lydia Marano/Monika Livingston piece. But what I wanted to mention here was really that list of people working on the book by now. In addition to the conceptual editor, we also have a “real” editor, Letitia Glozer (cat ⊕ yronwode’s sister) and a production manager, Gordon Barb. That’s a lot of people for a little black-and-white anthology.

One oddity I wanted to mention about the Stinz series is that about half the stories are done in magazine aspect ratio. Were these done before The Dreamery had been created, and done for a different venue?

Anyway: The series that took over for Alice in Wonderland is unfortunately The Tale of Ivan the Not-Too-Experienced by Diane Duane and Sherlock. The latter person is the artist, about whom I know nothing, but is the main problem here. It’s amateurish, is unpleasant to look at, and doesn’t read well. That huddle at the bottom of the page above is a separate panel, and not just a huddle a crouching giant woman is looking at.

This is artwork that Solson could have been publishing at the time.

Stinz continues apace, though, and Barr gets slightly more risque. Nakashima said in the editorial in the first issue that this book is way to the north of undergrounds, and he kept it that way. This is as racy as it gets, which is a nice change of pace.

And that’s something the other readers seem to appreciate. “The light, whimsical tone of the book. You never descend into ‘cuckoo for cocoa puffs’ inanity, but rather maintain a wistful, gentle nonsense.” Exactly, Jefferson Swycaffer!

One of the newcomers that slot into this ethos perfectly is Cathy Hill with her mad raccoons. Aww.

Kim Thompson, the co-owner of Fantagraphics, Eclipse’s mortal enemy, writes in to say that he really likes Stinz. (This is foreshadowing.)

But back to Diane Duane: Remember what the guy with that excellent name said up there? About The Dreamery avoiding inanity for whimsy? Well. This may be somewhat amusing, but it’s inane and doesn’t really fit with the rest of the book. I was a major Diane Duane fan when I was younger, but she’s fallen off the radar for me now. (I mean, her science fiction books.)

Kathy Hills shows how the right way to do it. Just perfection.

The most random thing to appear in these pages is this four-page strip by Tim Sale. It has a funny ending, but, man, that’s a different vibe… 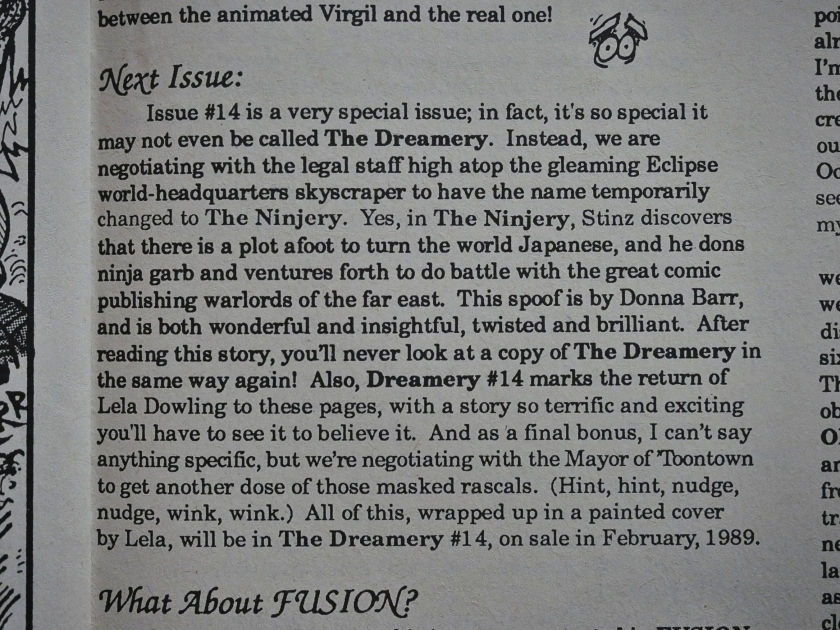 I would guess that the sales of The Dreamery was in the toilet by now, but they make a final effort with an all-ninja issue of The Dreamery. (“The Ninjery.”)

So we get Stinz as a ninja, of course.

Who confronts the evil warlord Shimanaka, who has nothing to do with conceptual editor Nakashima, is my guess. 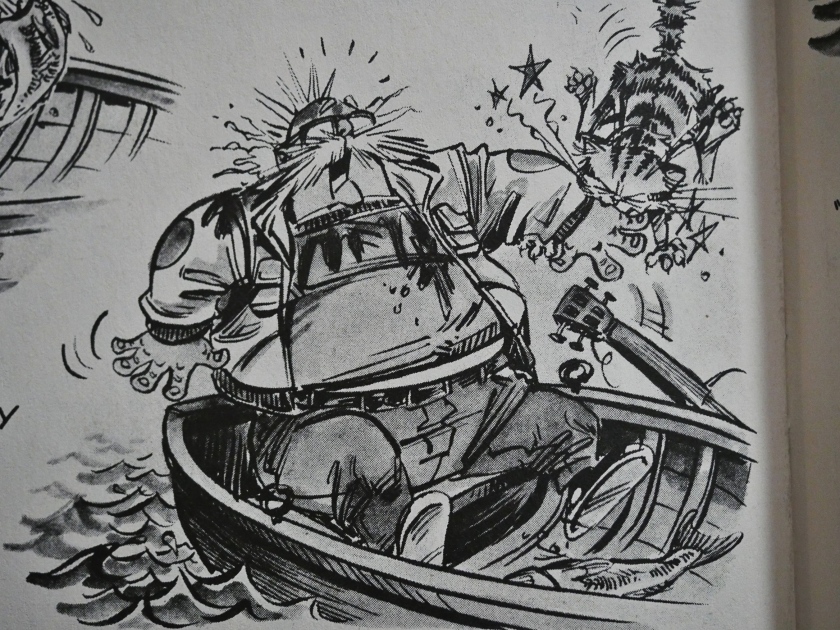 Except that it’s not an all-ninja issue: It’s just Stinz. But we get Lela Dowling back for a final, funny adaptation, this time of The Owl and the Pussy-Cat by Edward Lear, so I don’t think anybody were complaining.

For the final letters page, they had letters from the mothers of everybody involved. That’s whimsy.

Surprising nobody, the reason it’s cancelled is because of low sales.

But Stinz will continue in its own series… published by Fantagraphics!

But Eclipse published a collection of the Stinz stories in this nice volume.

In addition to all the stories from The Dreamery (except the one from the ninja issue), we get four new eight-page stories, and they’re fine as always. Some of the horse drawings are outstanding. What does that remind me of? Matthias Schultheiss? Hermann? Anyway, it’s great.

The paper Eclipse has printed this on is a bit unpleasant, though. It’s very white, but has a bit of bleed-through, which is particularly irritating when the artwork is as detailed as this.

Barr has continued to publish Stinz with a dizzying array of publishers, and I kept track until late 90s, when I just forgot to pay attention. But she released two 500 page omnibuses in 2015, I see now, and I’ve just ordered them now. I think it might make sense to read them in smaller portions and not all 1K pages in a sitting.

About Comics published a collection of Lela Dowling’s Alice in Wonderland in 2015.

Even The Misadventures of Prince Ivan was collected by About Comics in 2012, so this is one of those rare anthologies that have had most of the major series collected.