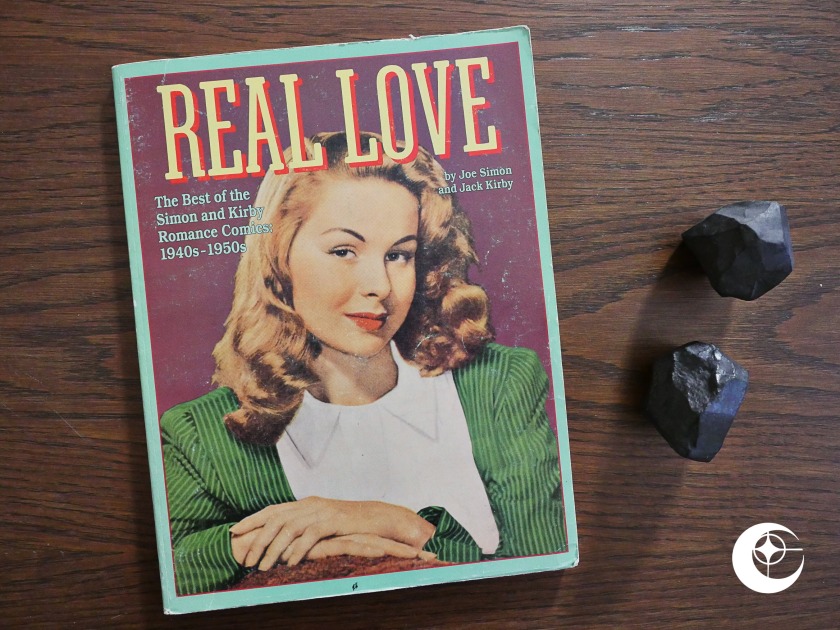 I approached this 160 page collection of comics from 1949/50 with some trepidation. I’m bored silly by most older American comics: I once bought a Craig Yoe collection of pre-code public domain romance comics and I literally died of boredom.

Somehow, my zombie corpse is still trundling around the world and reading comics, and so we come to this collection. Would I succumb to the powers of Anubis once again, or would my carcass be spared?

On the other hand, I had been presently surprised by some of the other Eclipse reprints from the 40s and 50s; in particular the Seduction of the Innocent series which shows that there are entertaining gems to be found here and there. It’s just that Craig Yoe doesn’t have much of a talent for seeking them out.

And I’m no Jack Kirby fan. I mean, I’ve read an Imperial Metric ton(ne) of his books, and I enjoy reading some of them, and I enjoy looking at more of them, but I’m no fan. Still, these comics were (as Richard Howell’s introduction explains) really, really commercially successful at the time they were released, so perhaps there’s some light entertainment value to be had? I mean, I’m not asking for a lot… I’m not expecting brilliant melodrama a la Douglas Sirk, but just some fun. 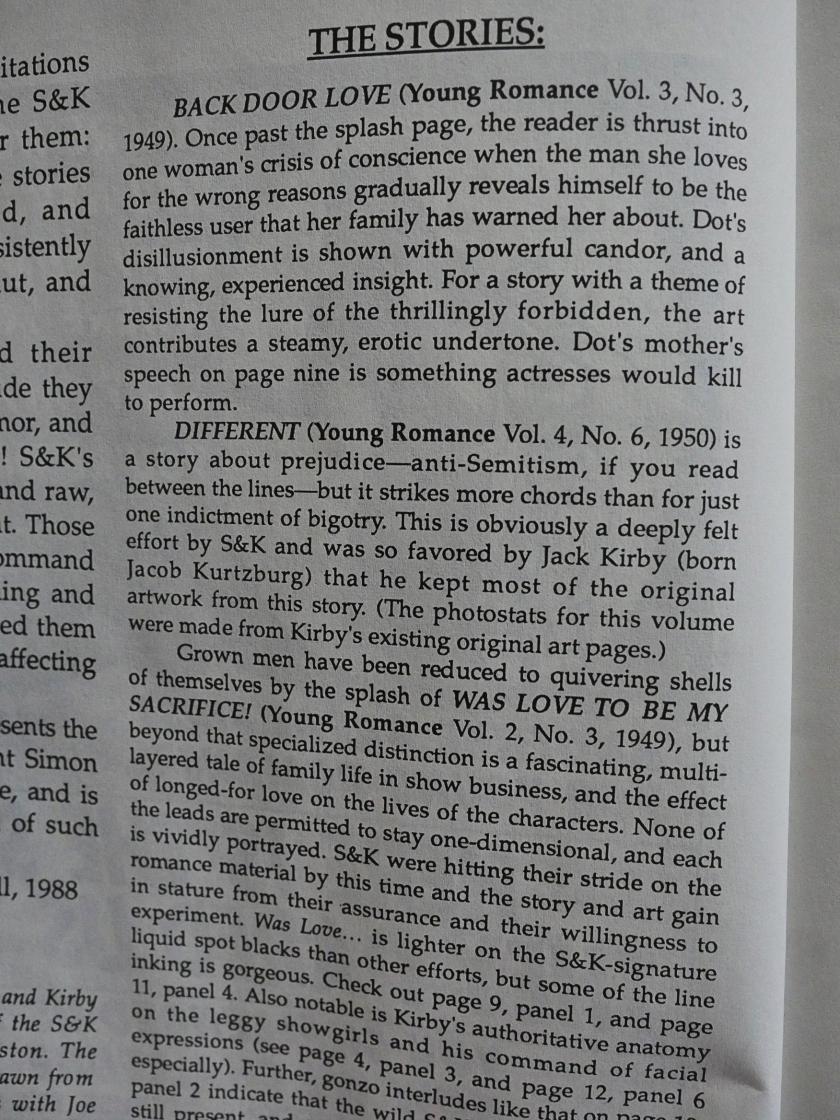 This is a pretty well-done reprint project. Howell provides a lot of historical context to the stories, and provides a paragraph or two about each story; some of which helped me parse some of the more coded issues that I might not have been completely sure how to parse otherwise.

Greg Theakston is listed as the main production person on this book, which I take to mean that these comics went through the controversial “theakstonizing” process. Basically, Theakston would take two copies of a printed comic book, bathe each page in a chemical bath that would dissolve the colours, and then end up with a black-and-white page that the printer could then use for reproducing in black-and-white. A couple of years later, this would be done by scanning the pages and removing the colours on the computer. 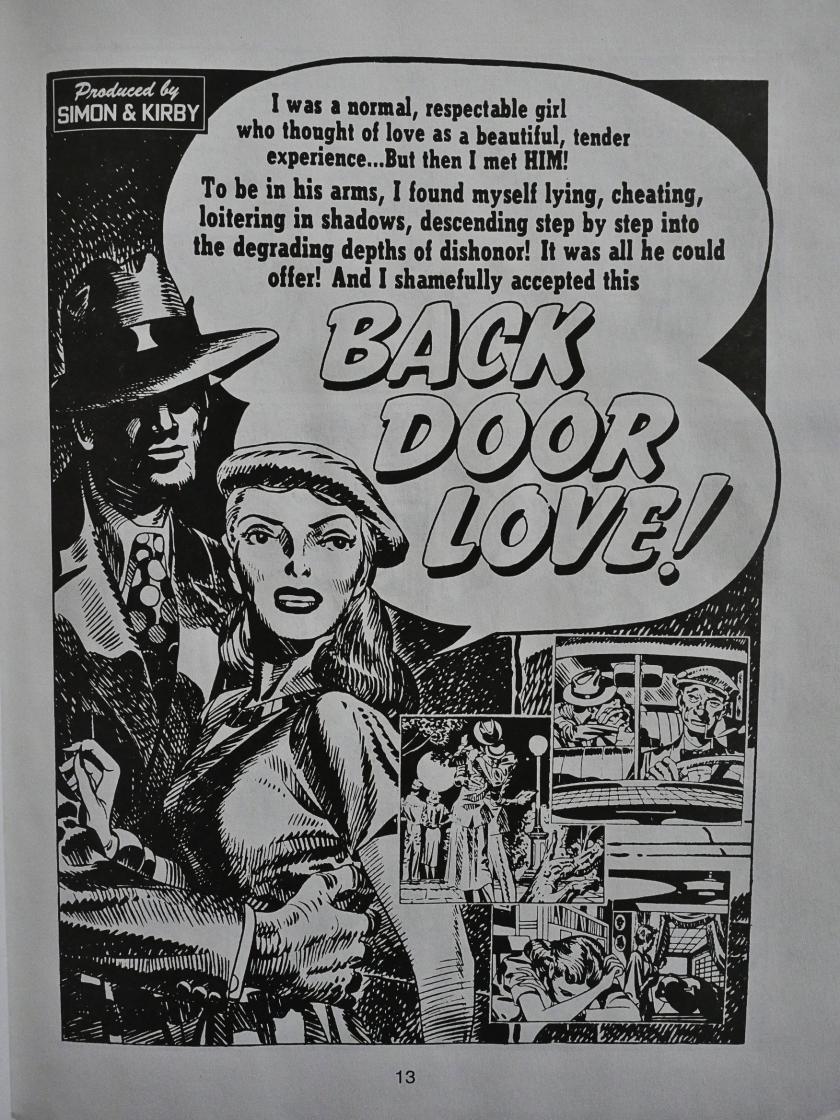 If that’s what these pages went through, the results aren’t all that bad… I mean, many of these pages clearly look like if they’ve been reproduced from newsprint, but I’ve seen a lot worse.

(And also about that page up there: Tee hee.) 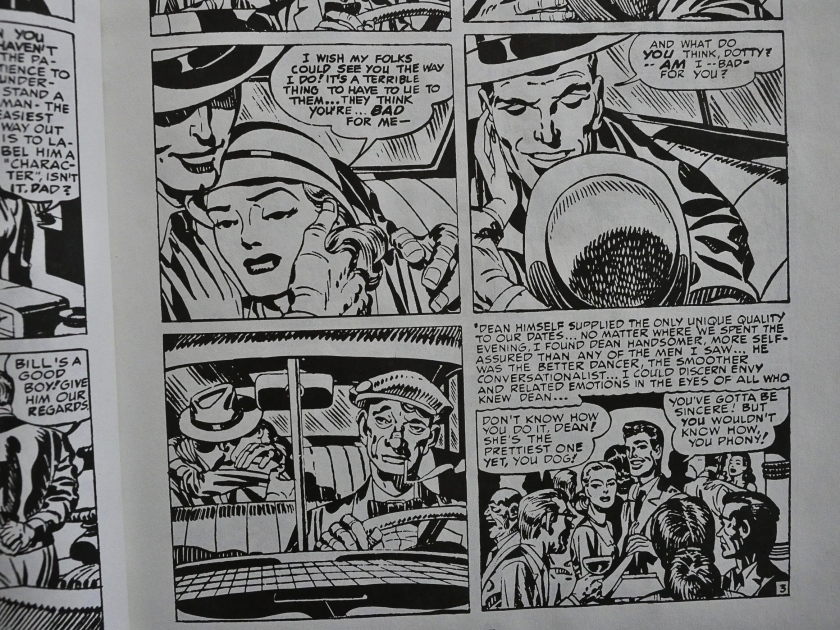 Anyway, these are romantic short (8-15 pages) stories, but they’re pretty dense. In some of the more involved storylines you almost feel like you’ve just seen an entire 50s B movie. They’d need to pad out the time a bit with some dance scenes, but these are incredibly imaginative stories that pack an emotional punch. I’m found myself completely won over after just having read a few pages.

And just look at that laconic expression on that cab driver’s face. Just look at it! 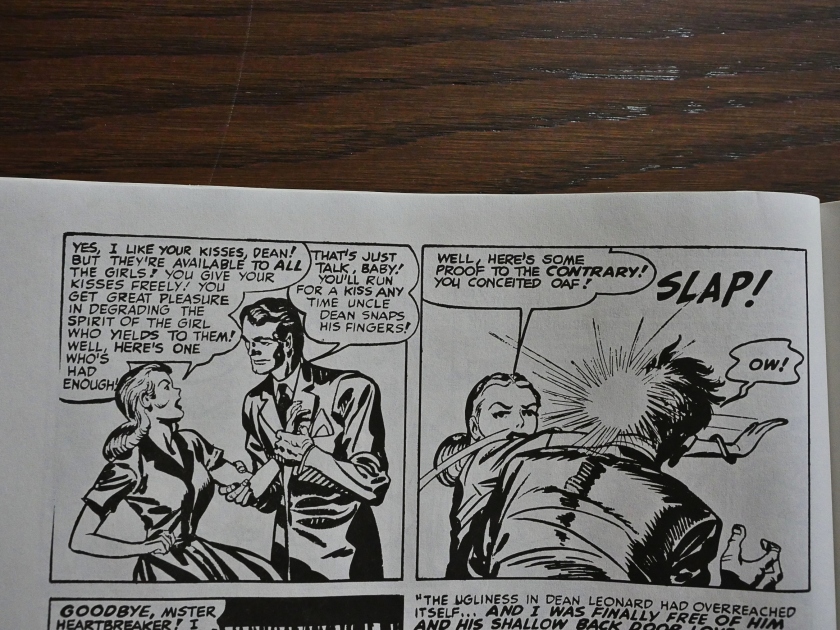 The editor picked out a small selection of stories, and these are presumably “the best”. While you expect a certain amount of repetition, plot wise, when reading an anthology of these stories, there’s virtually none to be found here, so either Simon and Kirby were plotting geniuses that had stories on tap forever, or the editor was very careful and thoughtful in the way he selected the stories.

All of the pieces are told by the protagonist, so there’s a confessional/bragging/whatever “I” voiceover to every stories, but other than that, the protagonists are men, women, nice people, bad people, and weird people.

I’m also impressed by how much agency the female characters are given. In most of the stories, they’re the driving force, even if the protagonist is a man. 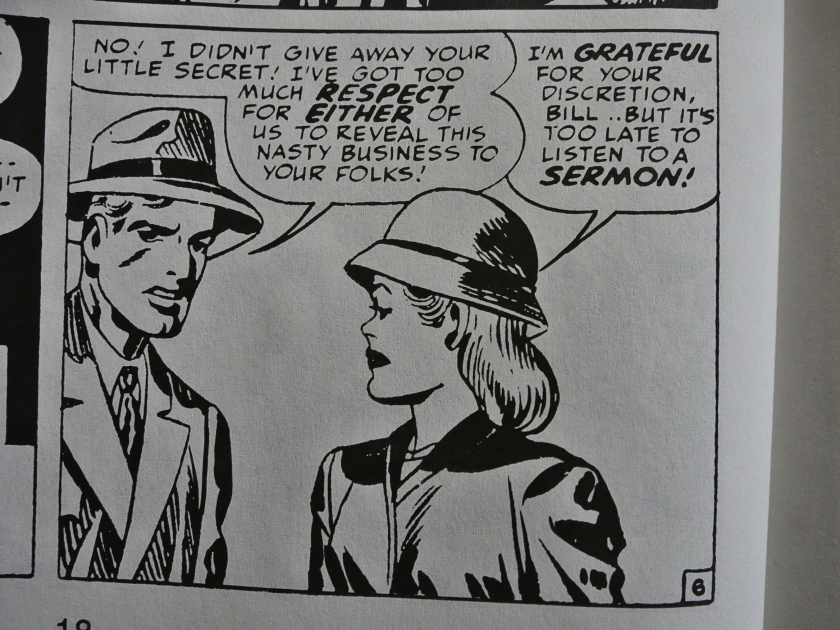 These comics were obviously meant for colour printing, and Kirby and/or Simon left lots of white space in many panels to be filled out. So it should perhaps have remained in colour. And some of the panels show more signs of having had serious retouching than others. The woman’s face up there, for instance, looks a bit off, I think, and the lines on the man’s face look rather blunt. 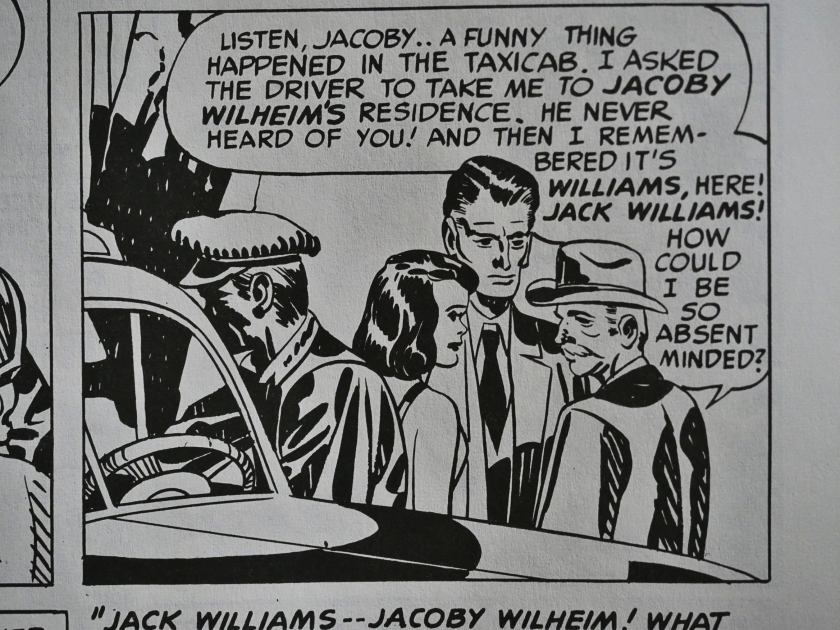 Simon and Kirby were always political. Captain America, their first breakthrough creation, was always off fighting Nazis. In these romantic stories, some of this is somewhat coded. The man above, who’s changed his name from Jacoby Wilheim to Jack Willams to avoid persecution in the US, is only described as “a foreigner”. Did Simon and/or Kirby want to leave it ambiguous whether they were thrown out of the country club for being Jewish or for being Germans? Wilheim isn’t an obviously Jewish name; if Kirby had called him something like “Jacob Kurtzberg” there would have been less doubt… 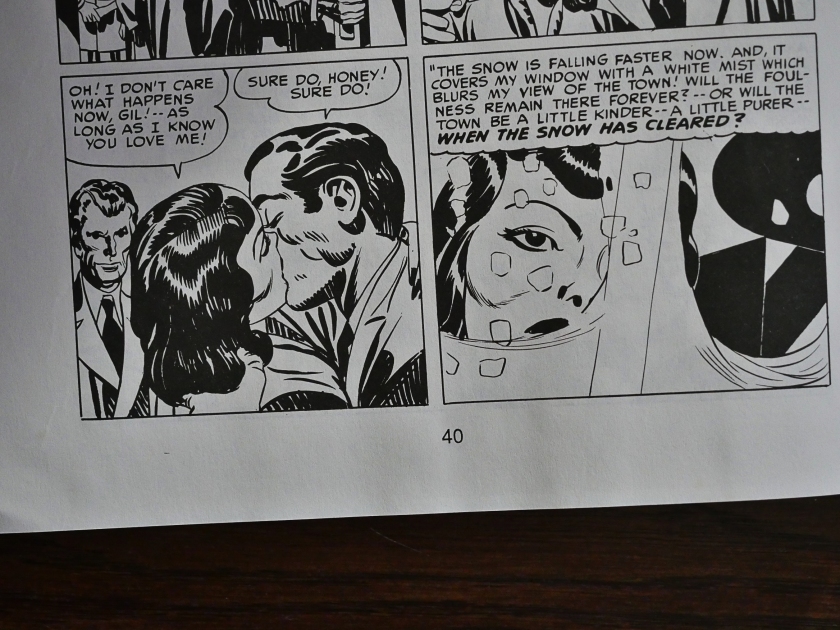 The introduction says that Kirby was so proud of this story that he kept the originals for it, which he didn’t with the vast majority of his vast output. And I can totally see why: It’s a great story; very affecting. 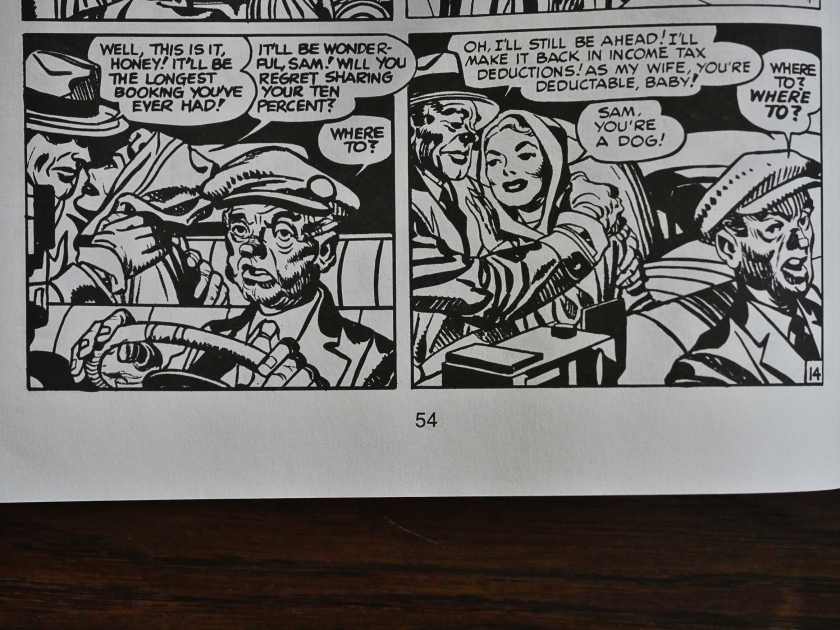 But it’s not all gloom and racism. Most of the stories are just straightforward fun. Some of them have twist endings, some of them don’t. Sometimes the girl gets the boy, sometimes she doesn’t. There’s no formula at all, which is a huge departure from the soul-killing gross of romance (and non-romance) comics from this era.

And while probably nobody thinks of Jack Kirby as a great humorist, this book has plenty of comedic touches. Mostly in the form of cab drivers who just don’t give a fuck about the dramas happening on their passenger seats.

Hm… “Milk-sop”? I just wonder about the etymology… Is that the same as “milk-toast”, which I’ve also seen spelled all fancy-like as “milquetoast”? If only there were a search engine on the web or I could be bothered to put the mouse pointer on the Firefox icon… I guess I’ll never know. 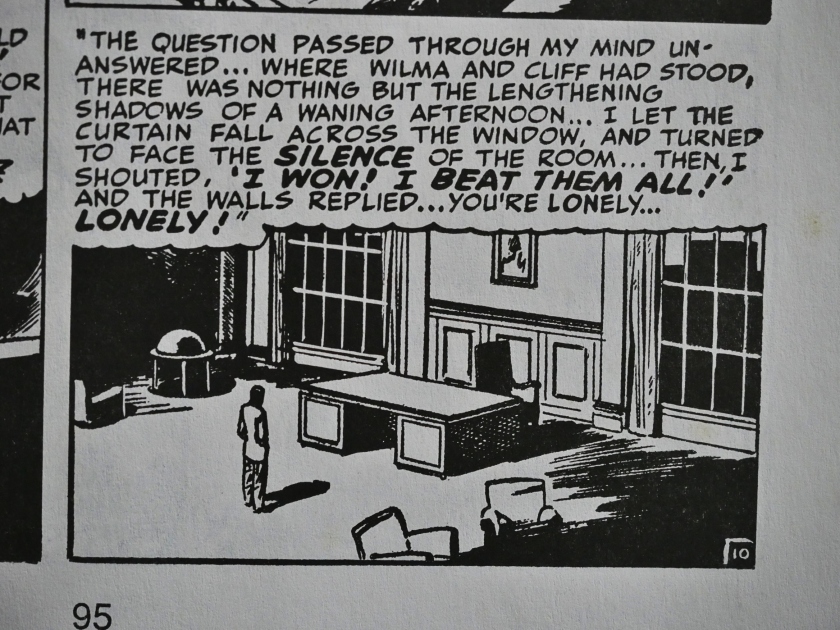 Did I mention that not all the stories have happy endings? Yes? OK, but behold the gloom above! 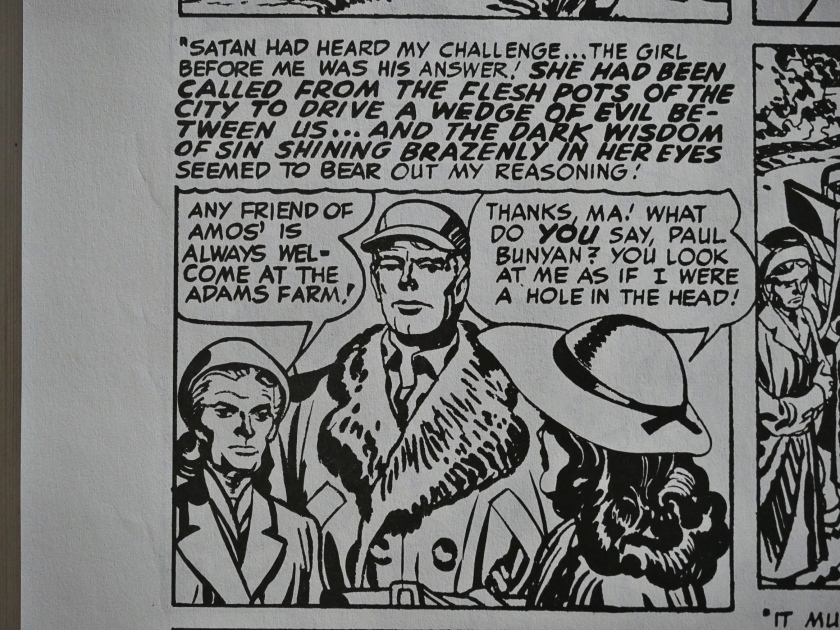 I was really taken by this story of a borderline deranged scold of a lumberjack who grows passionate about a woman SENT BY SATAN! 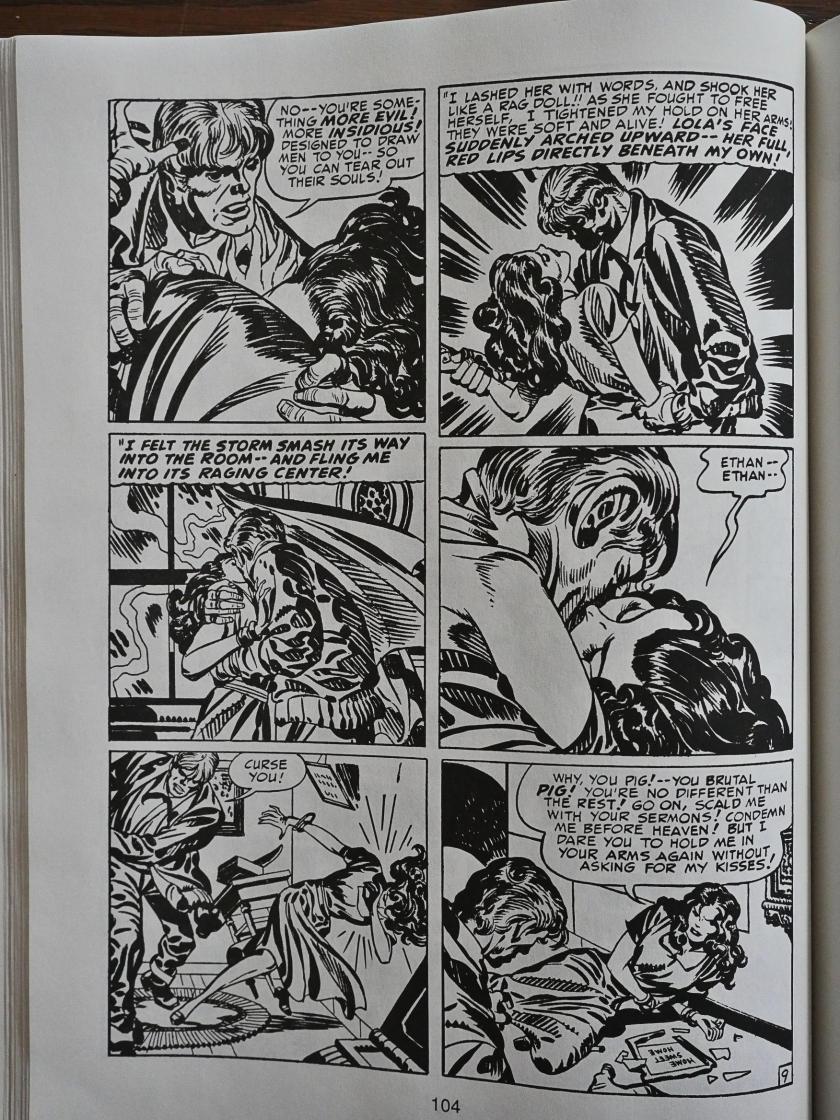 Well, that’s what he thinks, but he’s, like I said, borderline deranged, and Simon and/or Kirby doesn’t hold back. This one does have a happy ending, but I was wondering for a while whether Kirby and/or Simon were sending the insane lumberjack off to the wood chipper.

Such violence! Kirby action! There’s a lot of really good art in here. Kirby’s anatomy isn’t exactly realistic, but somehow it all fits together when he adds all that dramatic shading and those razor-sharp lines. He really moves the eye naturally across the page, conveying the story transparently. 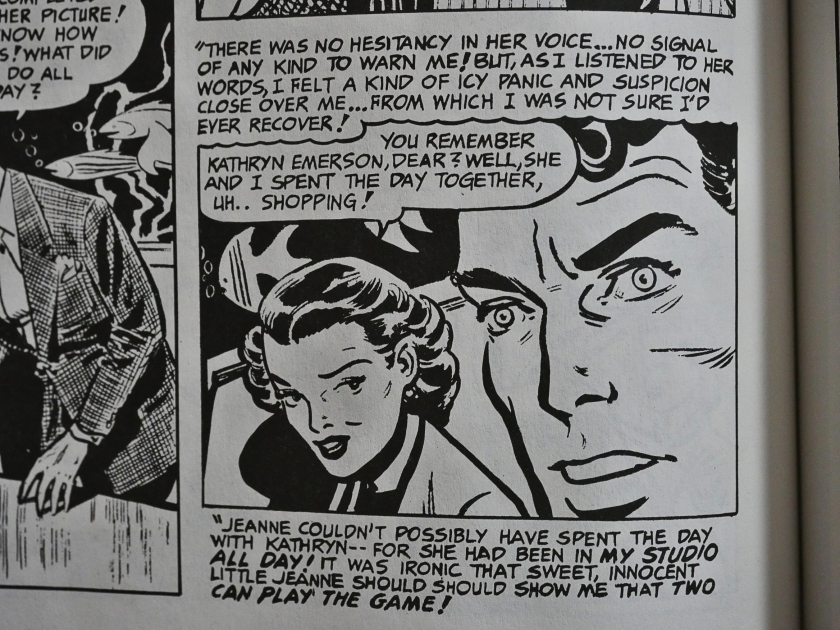 And I totally loved this short piece where I have to briefly recap the plot, which is something I loathe doing: First we get seven pages of that guy up there cheating on his girlfriend, hanging out with a stream of beautiful women. We never really get to see the girlfriend other than off to the margins; she is totally not a protagonist or has any agency, she’s just an appendage to the narrator.

Then, in the very last panel, without any foreshadowing whatsoever, we find out that she’s cheating on him, too. 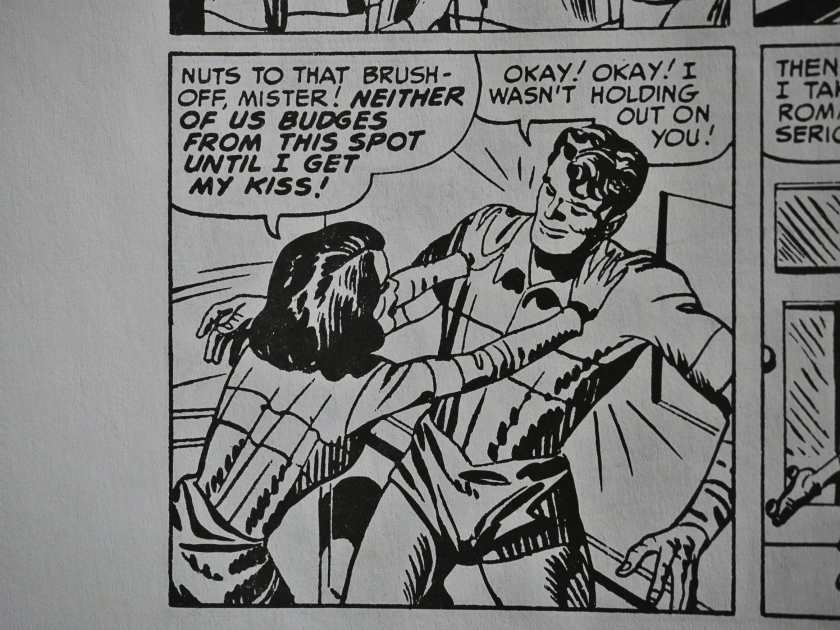 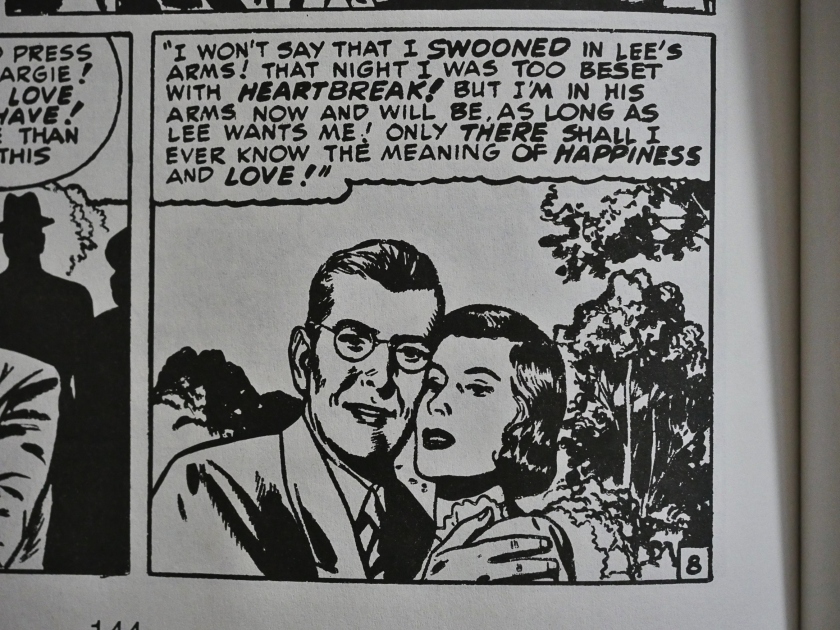 The most bitter-sweet ending of them all: Settling for some dude.

As taken as I was with this collection (and I really enjoyed reading it), I somehow don’t want to run out to buy a complete collection of these comics, either. These 160 pages feel sufficient to me. At least right now.

But weirdly enough, it looks like nobody has taken it upon themselves to reprint these comics. Fantagraphics released a collection called Young Romance a few years back, and it covers the entire period from 1949 to 1959, and has zero overlap with this collection, if I read the contents page correctly. (I totally forgot that I had the collection on a shelf here or that I had read it.)

Hm… There was some controversy about that book. In 2012, it was in public domain, while the Eclipse book claims that these stories are copyrighted by Simon and Kirby. Did the copyright expire between 1988 and 2012? There’s some suggestion that Fantagraphics publishing that book spiked Titan’s plan to do a complete reprinting of the romance books. And that seems to be the case, because they didn’t publish any.

It’s a shame. This stuff is way better than most of the 50s stuff that gets reprinted.