Hey, that Eclipse-less holiday didn’t last as long as I thought. When did I sign off? April 1st? Makes sense. But now I’m back!

… with the book that really got black-and-white boom and bust underway. It all started with Teenage Ninja Mutant Turtles, of course, but it hadn’t really yet become obvious that you could shovel any kind of garbage out to the direct sales market, and the stores would buy it all frenetically in the hopes that one of these books would be the next Teenage Ninja Mutant Turtles, selling for megabucks to deranged collectors.

So this book is the first (I think) of the parodies of Teenage Ninja Mutant Turtles, and it was quite successful, getting a second printing (which is what I have here), even though there’s not much to recommend the book.

Parsonavich seems to be inspired by… Moebius? Via Frank Miller’s Ronin? With a heavy dollop of old-school underground sloppiness. Hm… Is there also a Matt Howarth thing going on with the way he uses all those semi-dotted lines?

But while he’s got good influences, he’s not what you might call actually, er, good. 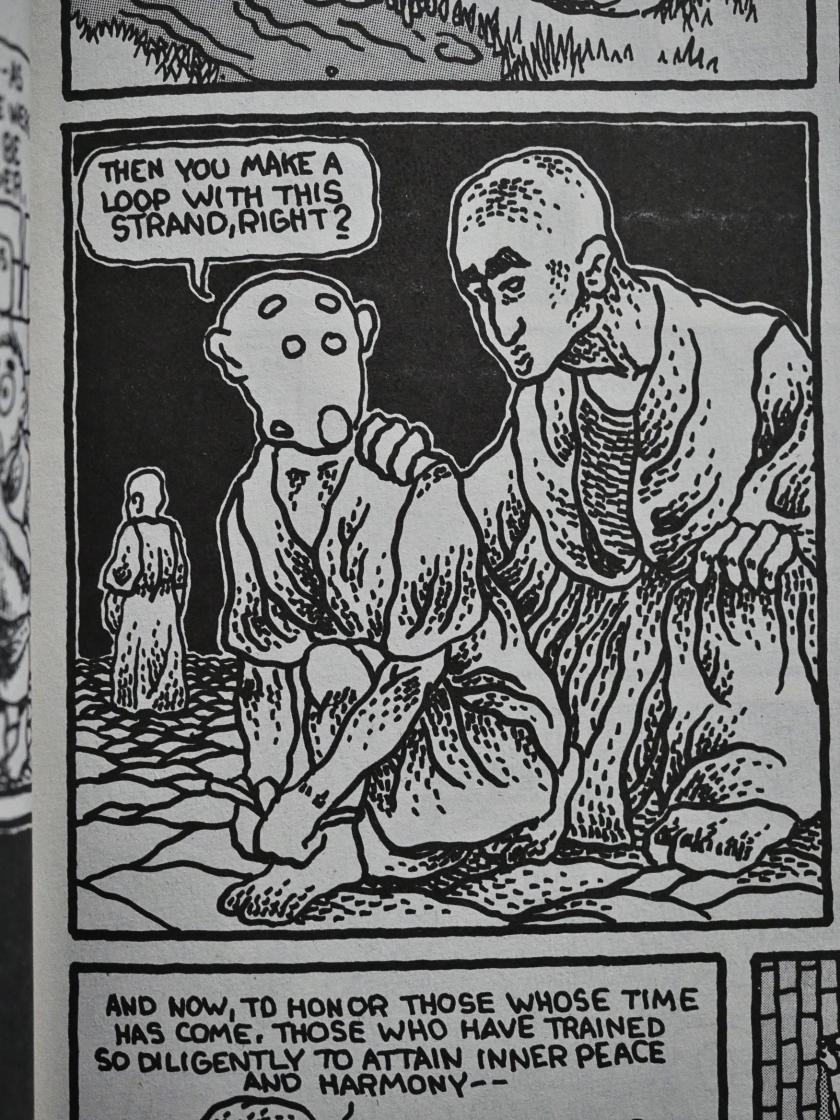 But what charms the book has, it’s all Parsonavich’s. It has a weird personality, and it’s fun looking at some of these pages. But then you start reading it and oy vey. There’s one hopeless pun after another, and nothing makes much sense, and there’s a feeling that surely the writer must be a sixteen-year-old. It’s not a bad book for a sixteen-year-old, but it’s a bad book. And Chin was twenty-three when he wrote this.

The panel above is from a sequence where the gag almost landed: It’s a Kung Fu training montage, and one of the things they learn is how to tie their shoes. That’s kinda funny, right? But… that’s a fun as it gets.

I tried my best to pretend that I was twelve years old again, and just stop being so critical, and try to enjoy the silliness, but it’s not silly enough.

The fake pull quotes on the rather nicely designed covers are… there. The design is cribbed from Ronin, of course, but it’s still a nice design. 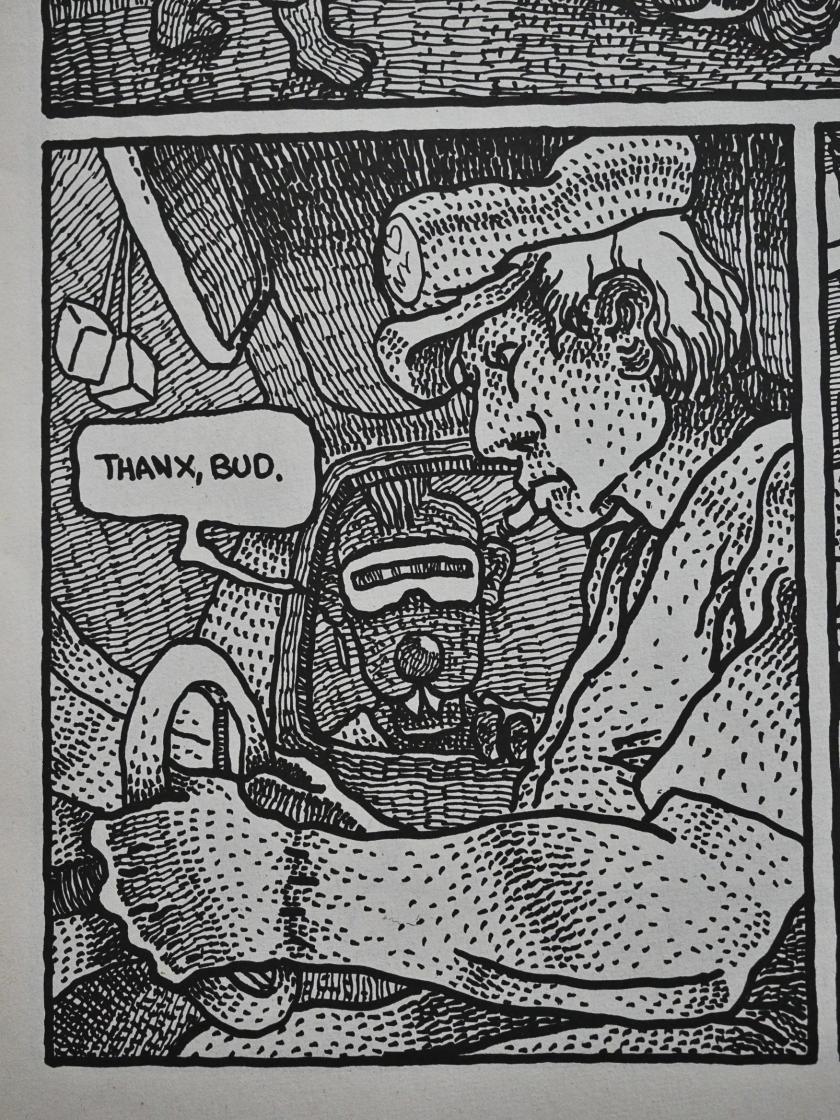 Parsonavich is very uneven, but sometimes he does these panels that are like a swirly storm of little non-crotchy lines, and it’s rather nice. It’s like if a mid-70s Moebius had gotten stoned and really obsessive.

These issues are jam-packed. There’s usually thirty story pages, with almost no house ads, which is very unusual for Eclipse. This does mean that we get backup stories that aren’t even up to the standards of the main feature, like this one by Kevin Harville and Herb Wood. 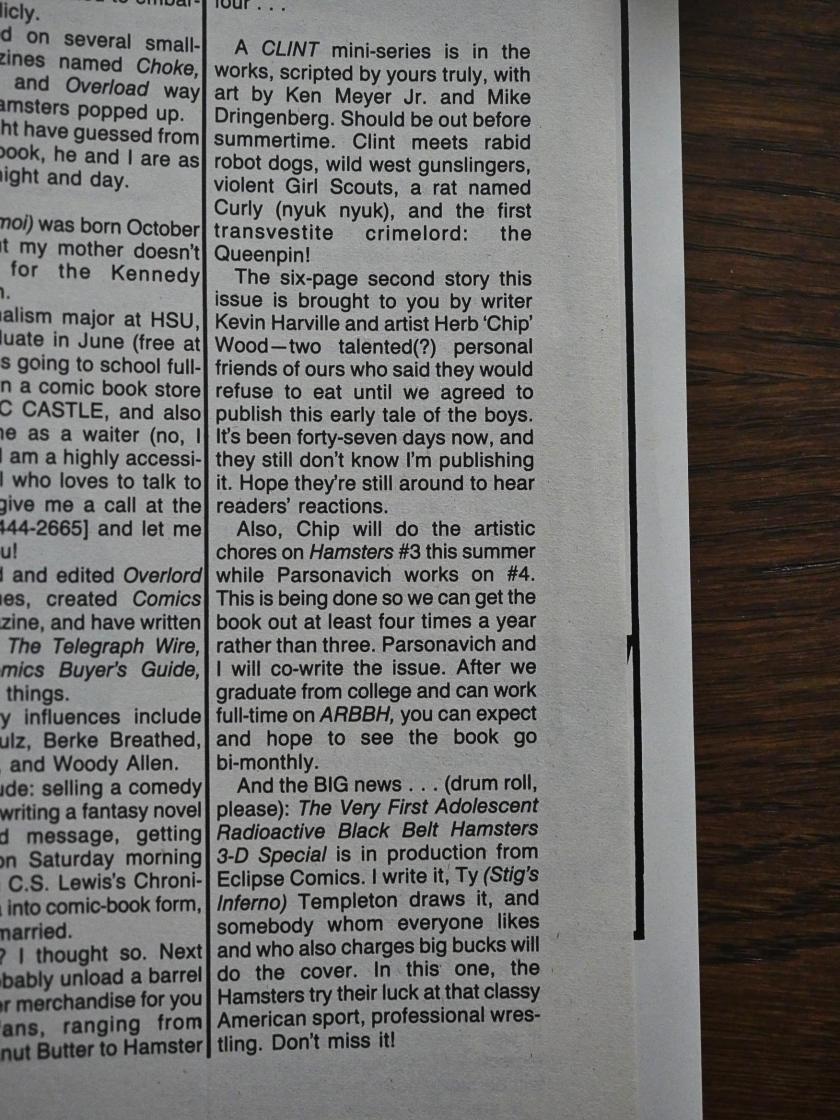 Right from the start, it’s obvious that Chin is very enterprising. In issue two he announces a spin-off miniseries, a 3D miniseries, and over the next issues he’ll announce a colour graphic novel, a possible video game, a role-playing game (none of these happened), and a Commodore 64 game that he designed himself and was selling. So he’s very… er… entrepreneurial, and perhaps that’s where his attention was focused. It was not on writing good jokes. 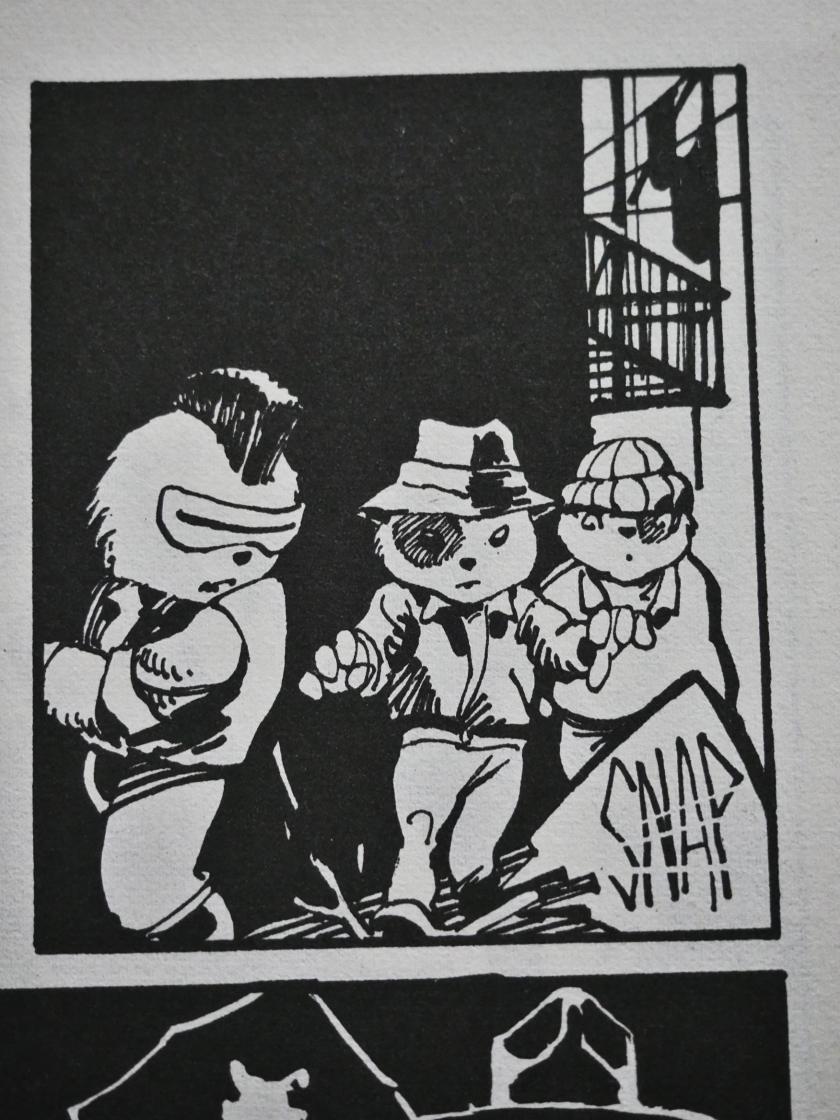 None of the other artists involved (here’s Herb Wood and Mike Dringenberg on a fill-in issue) seemed to pay any attention to Parsonavich’s character design. You can tell who each of the hamsters are by the eye spots and the mohawk. 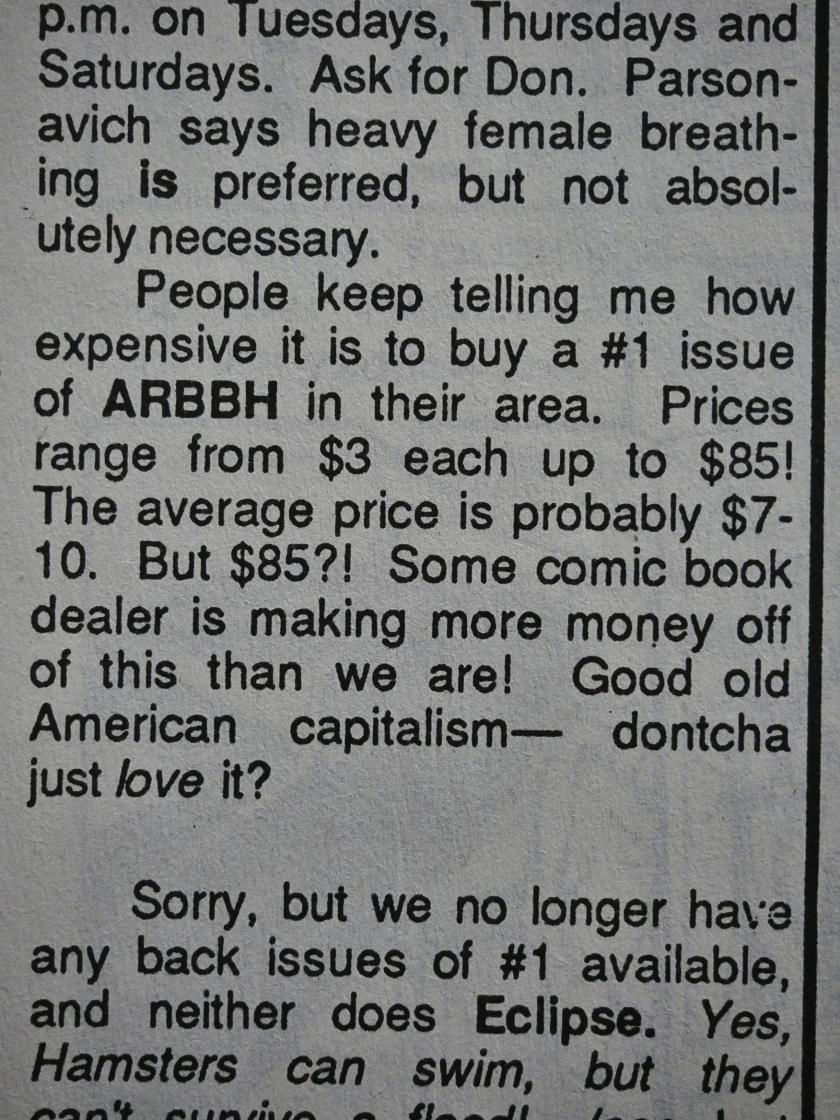 Chin writes that it’s been rumoured that the first issue was selling for $85 somewhere in the country. Yes, this book was a winner. 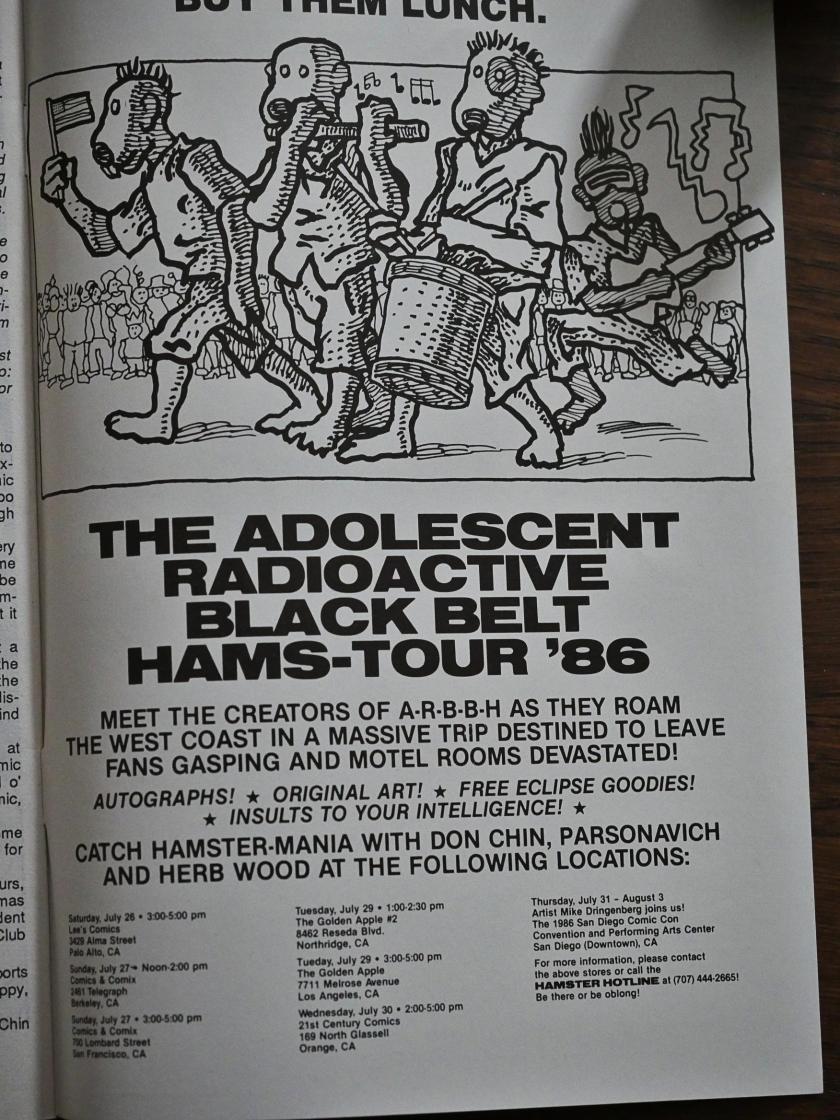 They even toured comic book stores in California.

That’s almost like a joke! (They meet Eclipse’s new acquisition The Heap, and he’s looking at his reflection in the water. Just in case you’re having any difficulty parsing that panel.)

Chin helpfully explains the chronology over the various series. NICK here is Naive Interdimensional Commando Koalas, or whatever they were called. That book is published by Independent Comics Group, which is a subsidiary of Eclipse I wasn’t aware of, and won’t be covering in this blog article series. That book is the only comic book they published: All the rest are character indices, like The Official Legion of Super-Heroes Index. I wonder why Eclipse set up that entity. To protect themselves from being sued by DC? 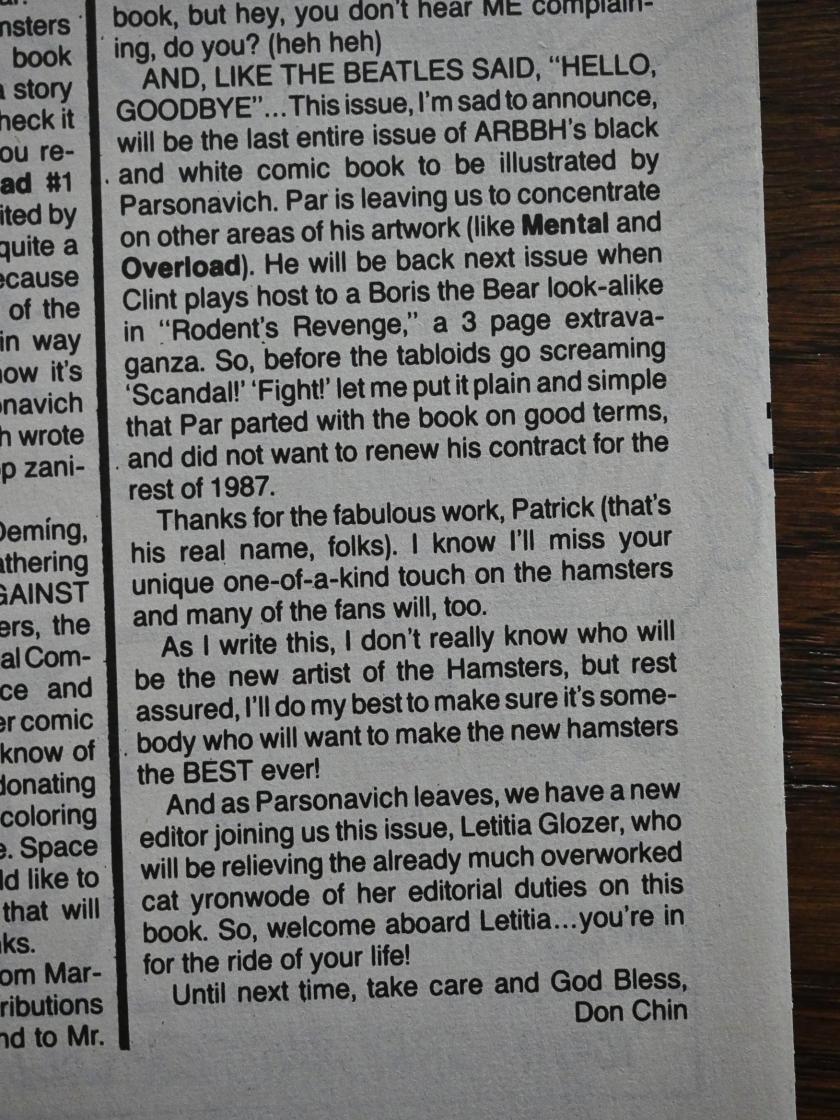 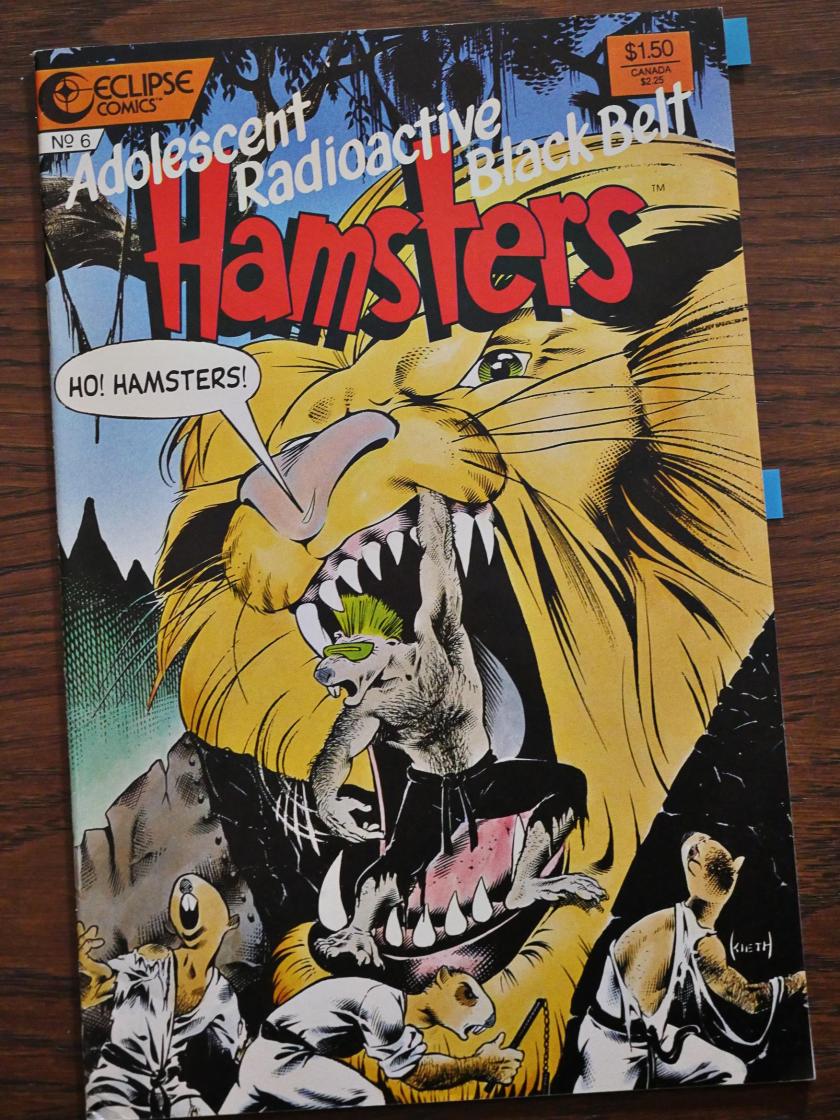 … and when he leaves, the trade dress of the book changes completely, and it starts looking like a normal Eclipse book. It’s not just on the outside, either: We now get a shorter main story and house ads and all that stuff, so I wonder whether Parsonavich was the designer of the book, too, when he was around.

The new artist is Sam Kieth! He’s a wonderful artist, so how did he end up here?

Things change a lot when he comes in: Things get genuinely weird instead of just being random. That monster is The Toe-Jam Monster from Atlantis. Yes. Then things straighten out a lot and we get actual plot, and one of the hamsters apparently dies, and there’s a lot of staring into the sunset and thinking about life and stuff and it’s all wha?

It’s still not good, though.

And they’re stepping up the publishing schedule, too!

And getting Mark Martin to do backups! What’s going on? 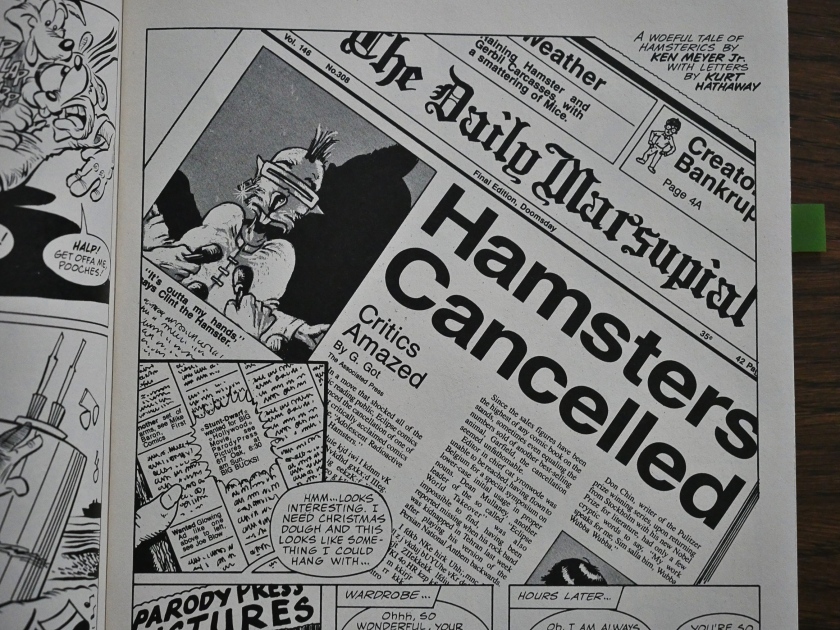 The final issue is all shorter pieces by a variety of people. Parsonavich also returns for some pages, and his artwork seems to have regressed. Or perhaps he doesn’t give a shit.

18 months later Chin makes another go at it with a single issue about the “Japanese Invasion”: Japanese comics were becoming popular in the US.

I’m guessing this didn’t really work out, either, because there’s only one issue. 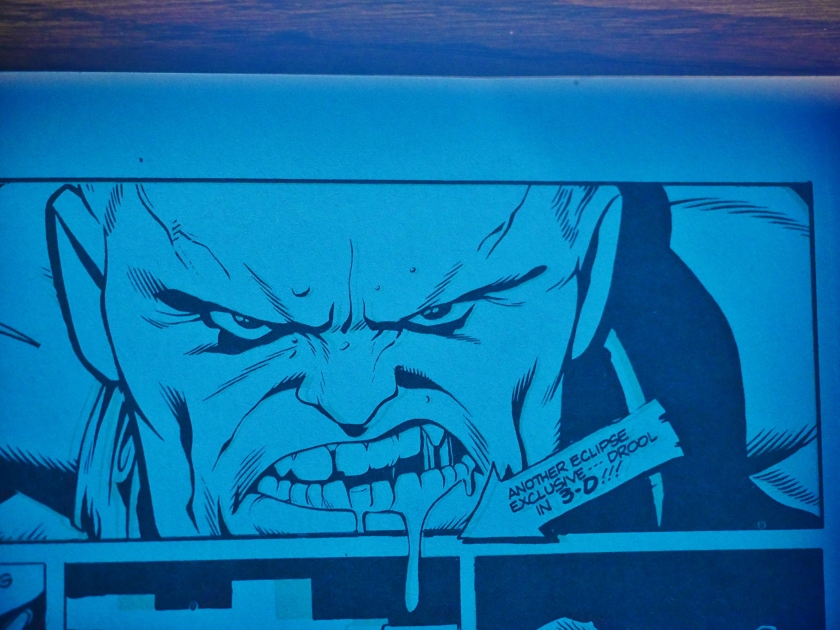 So let’s go back to 1986 again and the other spin-offs. First we have the incredibly sharp-looking 3D issue drawn by Ty Templeton.

The 3D works great, and I’m assuming that the funnier jokes are Templeton’s.

Is this Templeton? Hm… It’s variations on the old weakling ad trope…

That joke is probably all Chin, though. 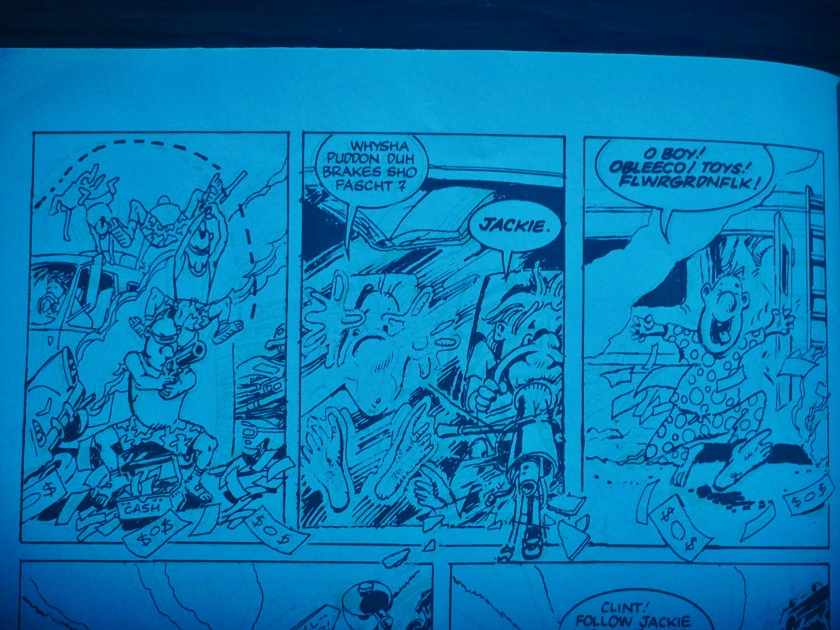 All these 3D issues were published at a speedy clip, with a different artist on each issue. Gotta cash in before the 3D fad fades. Tom Sutton does an issue, and while he’s a funny artist, his artwork is so busy that it doesn’t 3D very well.

There’s so many details that partially overlap that it all just turns into mud. At least for my eyes. Nothing to focus at. 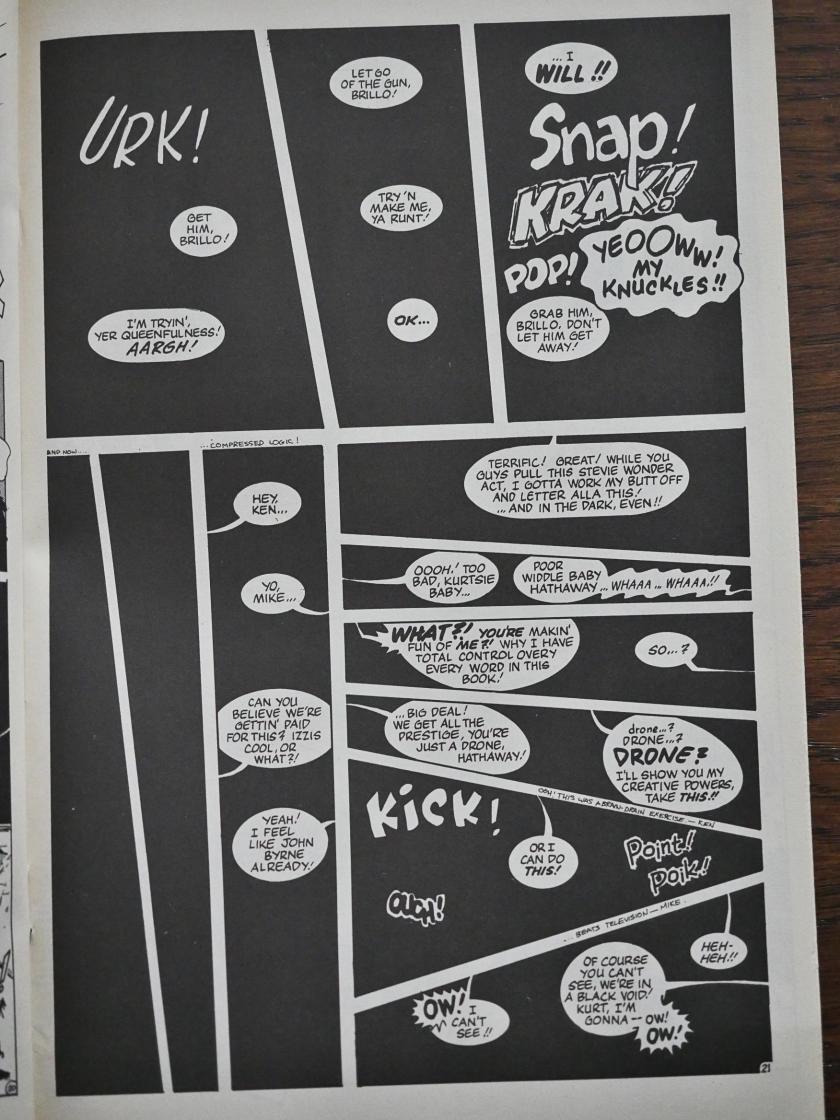 This is probably the funniest bit: It’s where the letterer discovers that he can beat up the penciller and inker just by writing sound effects in the parts of the (black) panels they’re standing in. I haven’t seen that done before…

Chin stated in a letters column that this book had sold half a million copies, and I assume that’s over all the issues.  That’s an insane amount of hamster copies to be floating about.  You can still pick up “near mint” copies of #1 for cover price.  If you want to.

Chin went on to start Entity Comics, a small publisher in the 90s of whom I know nothing.

From The Comics Journal 110, from an unsigned piece that I assume is Heidi MacDonald:

You may recall that I was less than enchanted with the first issue of Adolescent AOOLESCENT RADIOACTIVE BLACK BELT HAMSTERS Radioactive Black Belt Hamsters The second issue is now out, and I really don’t want to sound like a broken record, but this is very lame stuff indeed. Sample: Man to Hamsters: “Youse guys ready to paint the town?” Hamster. “Where we gonna get that much paint?” Enough already. On the tive side, there is a slightly amusing Frank Miller joke on page 12, and this second outing is a bit better than the first. Perhaps the intended effect is • ‘Hey this is so awful it’s fun,” but even that is negated by an unfunny-bordering-on-offensive view Of Harlem (a charge which writer Don Chin tries to deflect by having characters in the story complain about it, but that still doesn’t make it funny). I might also point out that art is a textbook case Of how not to swipe from Moebius. The effects which Moebius uses for variations in shading, Parsonavich slathers over everything in sight, making each and every panel literally undecipherable. His draftsmanship is nonexistent. (Look at the last three panels of page 13, for example, where the proportions of Chin and Parsonavich vary in every single panel.) Seriously, this is such bad work that it’s all too easy a target. I’ll refrain from any further punishment. I only wish that Chin and Parsonavich would do the same.

Although I vowed to stop talking about the Hamsters, circumstances have forced otherwise. Adolescent Rad. etc., #3 features art by Herb Wood and Mike Dringenberg, which manages to make Parsonavich’s—bad as it was—look definitive.