I remember I had a translated version of some Disney Zorro stories when I was like eight, and I remember thinking that they were super-lame. And I read basically all comics that came across my path, but these were so cheesy that even I couldn’t stomach reading them.

But, of course, I don’t know whether the Zorro comics I reluctantly read back then were the Toth ones or some other anonymous artist from the Disney/Dell coal mines.

Howard Chaykin writes a lively introduction to the first of these two rather thick volumes (120 pages each) and explains that he’s been a lifelong Toth fan, and reports on some amusing anecdotes about Toth’s argumentativeness. 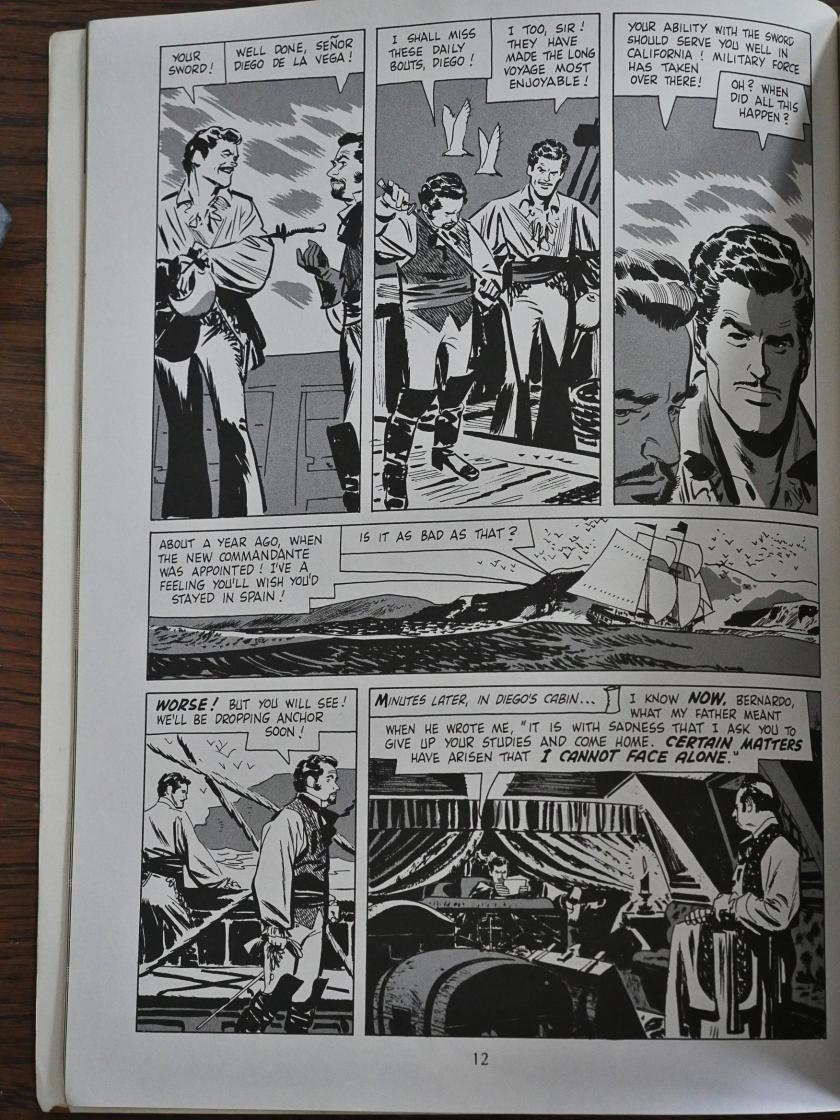 The Zorro comics I read back then were in colour, and in (just about) normal comics size. And this certainly looks like it’s been drawn for a colour comic, but like somebody added zip-a-tone to this version.

Aha! Toth did the guides and Eclipse added the tones. The tones are kinda weird: Usually when you do this kind of tone, you have several different darkness levels (i.e., how tight the dots are), but it’s 100% completely flat in this book. 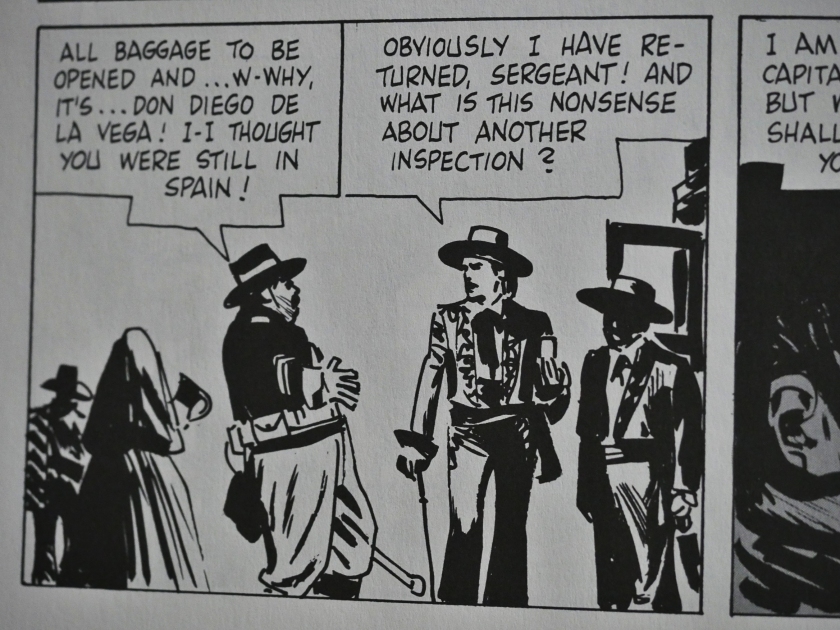 The artwork is wildly inconsistent. Some panels look like either Toth didn’t really spend much time on it, or something went wrong during reproduction. 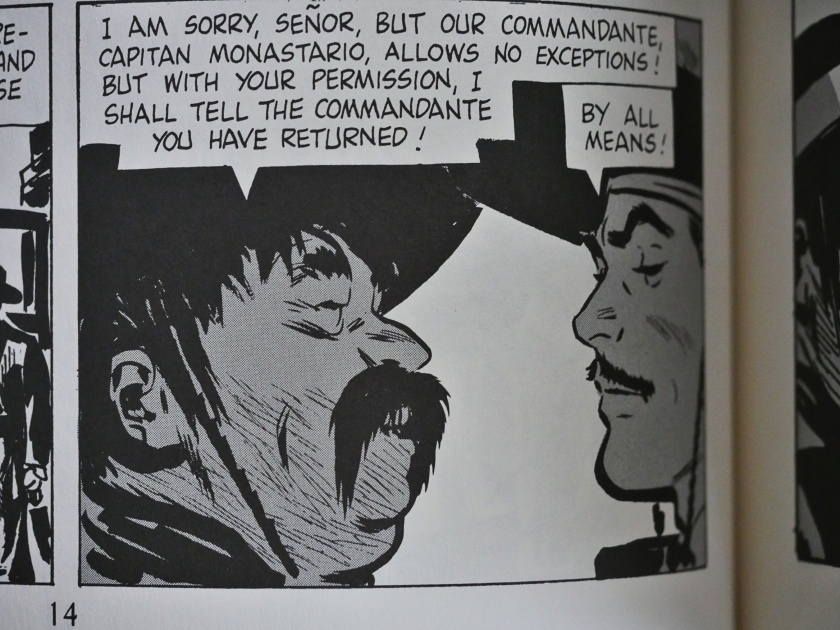 While other panels are super sharp. And since these panels are on the same page, I’m guessing Toth just spent more time on the panels that interested him more…

I had expected all these stories to be extremely repetitive, with Zorro outsmarting the stupid sergeant time and time again, and there’s certainly some of that, but there’s also change and development: Zorro gets some of his nemesises (that’s a word) sent off to jail, so it’s not a complete status quo. But the plot is basically what you’d expect otherwise, and it’s boring as fuck.

Weird faces. I’m beginning to believe that Toth didn’t really put much effort into this…

But still, there are some very nice panels here and there.

“Tee hee.” I think Zorro was almost unmasked (as the fop above) about forty thousand times during these 240 pages.

Toth does the introduction to the second volume himself, and he’s very candid. He explains that the stories are mostly adaptations of TV scripts, adapted by the same people who wrote those scripts, and that they contained a lot of piffle. It certainly explains the lack of fun and action: It’s more expensive to do adventurous scenes on TV, so you have people talking to each other for 95% of the time. It’s not so expensive in comics, and Toth wanted to make changes, but wasn’t allowed by the editors at Dell.

He also owns up to some of the artwork not being his best, and wonders whether some of it has been altered by Dell afterwards. 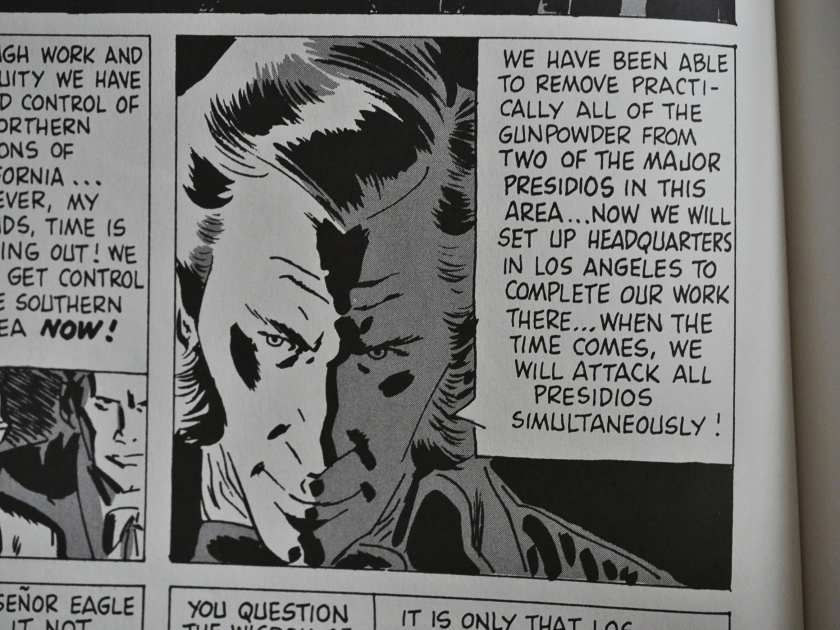 The artwork in the second volume is better than in the first. You get some great un-Tothy faces like this…

And some very Tothy action sequences.

Still, getting through this was painful, and I totally agree with my eight-year self: These comics are super-lame.

Eclipse had reprinted some European Zorro comics two years earlier, so somebody there obviously had a Zorro fetish.

Although the book contains hundreds of beautifully-drawn pictures, Toth’s storytelling is but adequate to the task — “adequate” with Toth is usually better than average elsewhere (and it is here. too), but here we also see him falter occasionally, leapfrogging key events in his breakdowns a time or two. missing the most dramatic composition for narrative purposes a few times, inking some panels perhaps too hurriedly. But when the master nods. it serves merely to conVince us he is human: it doesn’t spoil the stories.

Moreover, such momentary lapses are mostly lost amid the success. and everywhere they are evident they are at least as instructive as the virtuoso work.

These comics have been reprinted several times since, most lately by Hermes Press in 2013, so perhaps I’m just channelling my inner child too well.