This is the first of Eclipse’s new FX (or F/X, as they sometimes called it) of comics. The ads promised “all the action of today’s hottest films”. Let’s see whether this sizzles or fizzles. 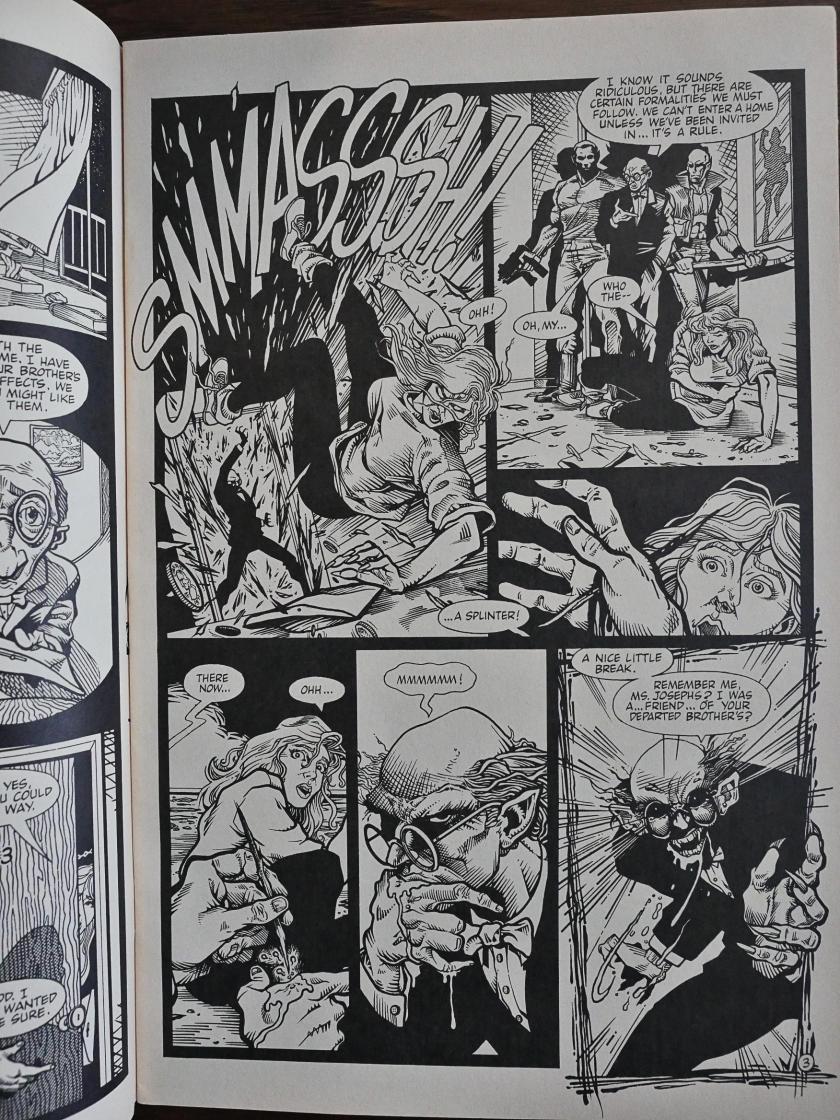 Back in the olden days on 1987, when Eclipse published a lot of action/adventure comics, they were all in colour and on kinda nice paper. These comics are neither, but the artwork isn’t bad. It’s a bit too messy for its own good, but it’s OK. 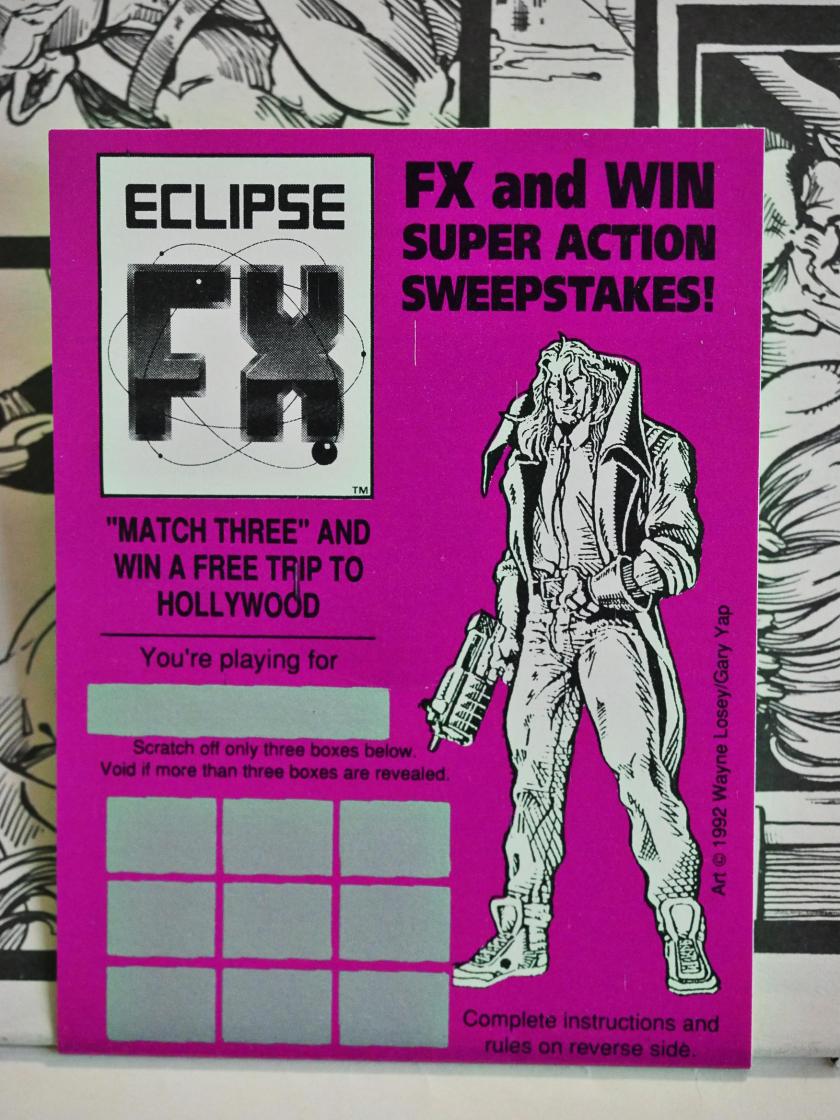 From the second issue, all the FX books carry scratch and sniff, I mean, scratch and win lotteries. So you’re supposed to scratch first the top line to see what you’re playing for, and then scratch no more than three boxes, and if the words match, you won.

Is that how these things usually work? I’m not very er knowledgeable in this area…

Among the things you can win are a trip to Hollywood, $500 in Eclipse comics (I’m guessing), original art from these comics, graphic novels, subscriptions to the Comics Buyers Guide and Wizard, and something called “ComiCovers”, and for the common people: One Eclipse comic book.

Most of these FX comics I got from Ebay, and they haven’t been scratched. Sad. So I gave it at try (even if the prizes might just be ever-so-slightly expired), but I couldn’t make a dent in them with my nail. So I got a screwdriver, but all that did was scratch the paper itself.

But, my, what a change in Eclipse: Three years earlier, they were publishing things like Brought To Light, from top shelf creators, and getting attention from the national press for bringing mature themes and politics to comics.

Somebody should adapt the Eclipse story into a tragic opera.

Aaaanyway. This comic is “all vampire action”, and it’s about a gang of mercenary vampire hunters. It doesn’t go for all out drama, but instead putters along quite well, doing witty repartee whenever the occasion offers itself. The storytelling isn’t all that accomplished, though: The pages don’t read that well, and it was just a chore remembering who all these people were.

For the fourth month running, we have Eclipse listing Miracleman #23 and Show Business (which was never published) as being “On The Racks”… 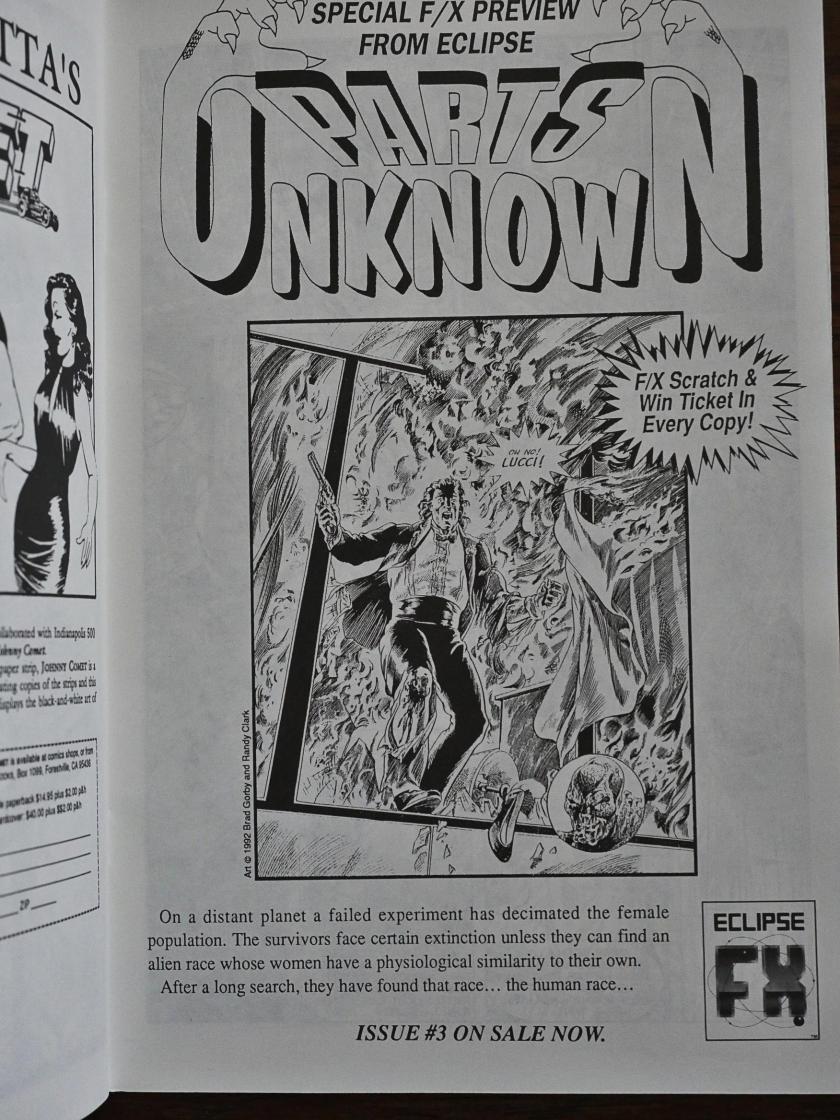 Eclipse were heavily into having letters pages in the mid-80s. It’s a way to reach out to a fan base, but it’s also a way to fill pages. For the FX line, they fill some pages by running excerpts from the other FX books. Since there are only three, they had to do some reruns, reprinting the same pages. Which is just plain weird.

Man, that’s a nice return on so little effort.

Oh, yeah, I just wanted to give you an example of the witty repartee.

But you have to admit, that’s a really, really good ending.

This wasn’t announced as a four issue series, and the ads for it let you buy five issues, so I wonder whether they cut it short or what.

That’s… not a good job on that Clive Barker ad. I think perhaps it was originally a colour ad, and they just… made it black and white through a not very good process.

Quieroz went on to work for DC Comics. McElroy seems to have written a few comics after this one, but then dropped out of the business, apparently.