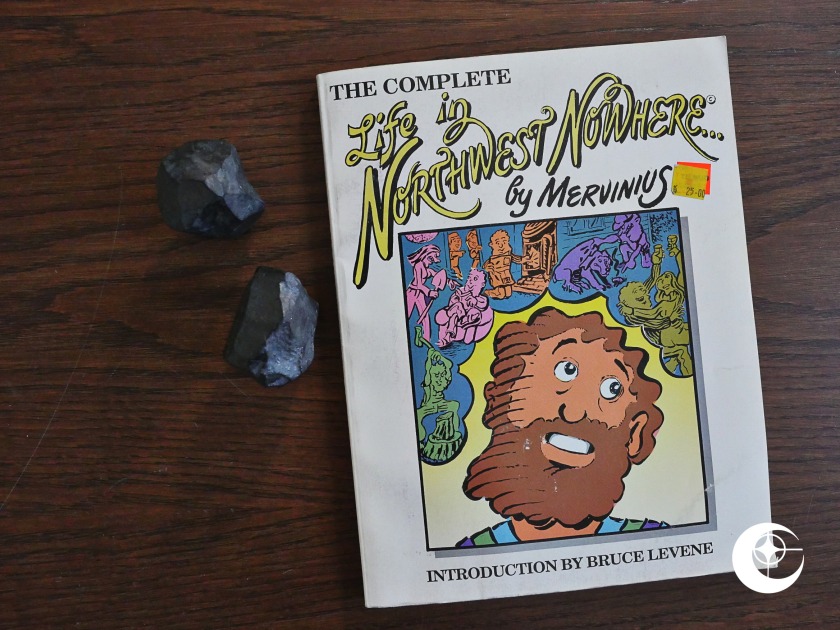 Heh. I apparently bought this on sale during the 90s, and it’s been reduced first to half price, and then half price again. So not a brisk seller at that comics store.

I think this is the final of the three unlikely books that Eclipse did the distribution for all of a sudden. They’d co-published books before (most notably the Acme books) and had some kind of relationship with Ken Pierce Books, but the three books Eclipse distributed in 1990 are all somewhat odd choices: There’s Gin & Comix, which was a New York Raw-like anthology, Moderne Man, which is a collection of environmentally conscious newspaper strips, and then there’s this one, which is a collection of comics published during the 70s and 80s for the Mendocino Review and similar venues. 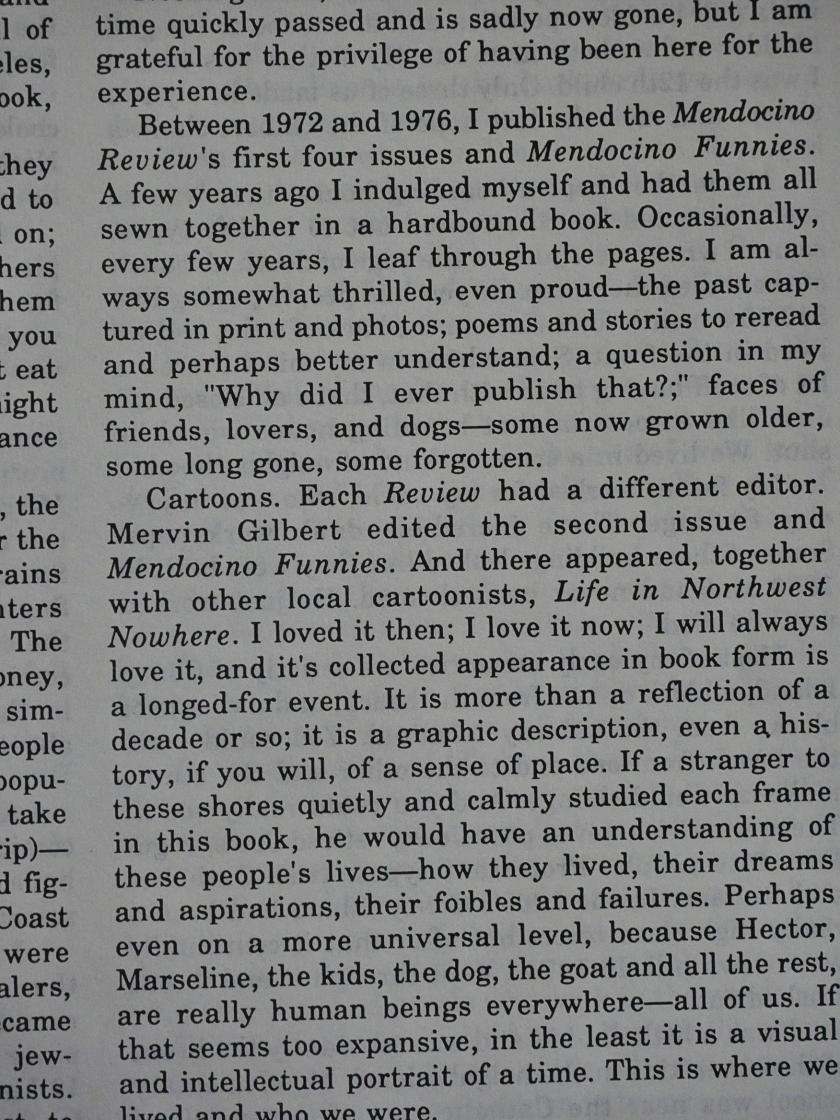 Bruce Levene, the editor of that publication, provides an introduction.

And Marvin Gilbert (aka Marvinius) describes his art technique, which I really appreciate. He’s using duotone paper, which has two different hatches embedded in it, which is brought out by using two special fluids. One paints with this fluid, and the hatches appear on the paper like magic.

So you can get very a painterly, organic feel to it, while there’s still a mechanical component. Gilbert’s art style is very much of its time, of course, with exaggerated facial features and postures, but it’s a style I find quite attractive. 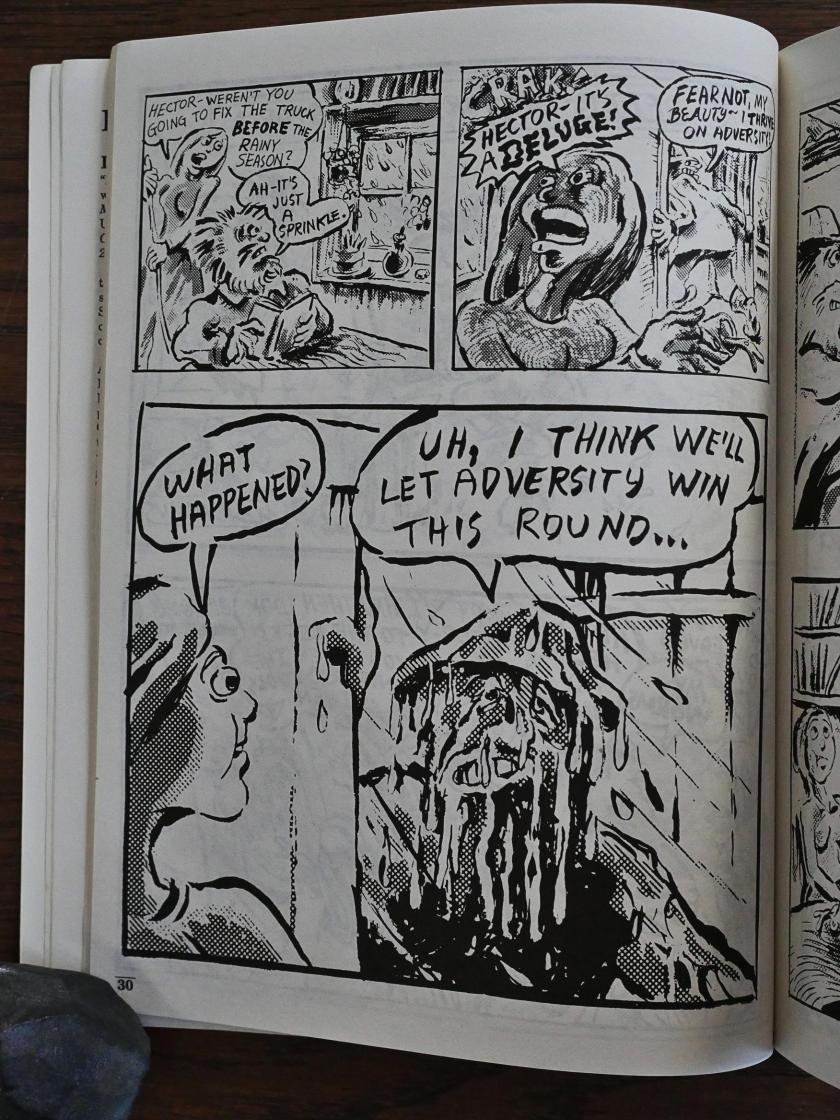 Sometimes they blow up certain panels in an exaggerated fashion, which is perhaps… not the right choice? Because the hatching then is gigantic and that looks odd, too.

Hm… I just realised that Gilbert’s artwork takes quite a bit from Will Eisner. It’s got that organic looseness to it, even if Gilbert doesn’t do the filmatic angles and stuff.

This collection is like 90% single page funny stuff. As punchlines go, they’re in the “gentle humour” tradition, mostly. It’s a very amiable read: We follow Gilbert’s stand-in character through his hippyish life with his wife and children, and the children grow up into teenagers over the years. I’m not sure we ever learn anything profound, but it’s a combination of slice of life with gag writing that’s very appealing.

But the sheer relentlessness of the one-page format makes it a slightly exhausting read. I found myself wishing that he’d just expand these stories up. I’d love to read some ten-page stories tackling a meatier storyline from time to time.

And while I find the artwork very appealing, both his lack of variation in facial features (especially with all the bearded men) and his lack of consistency in rendering doesn’t help with his storytelling. I was wondering whether those were different bearded men for a second, especially since Claire up there suddenly drops his name into the conversation. 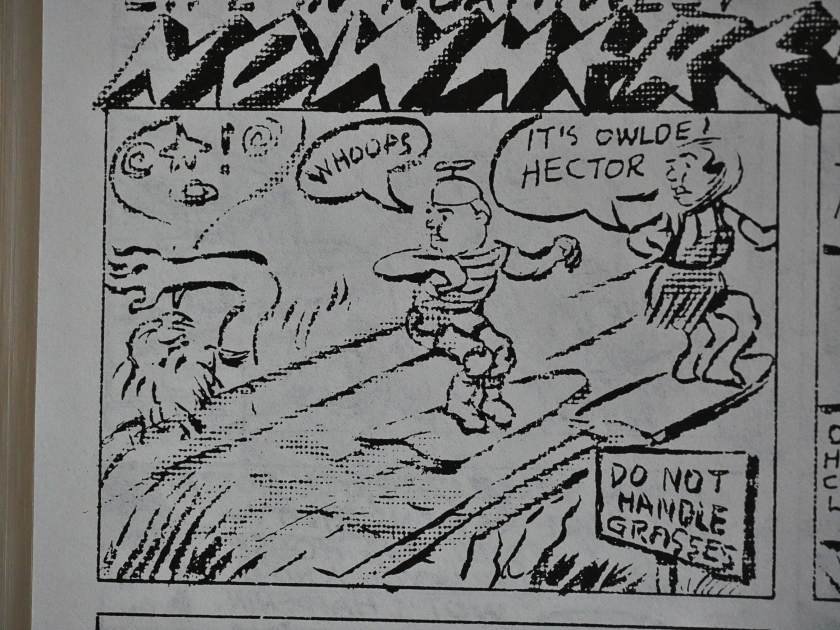 The artwork is mostly reproduced very crisply, from what I assume are from the original art of from the original negatives. But at about the halfway point in the collection, we get a number of strips that look degraded and faded. Shot from printed copies of the newspaper they appeared in? 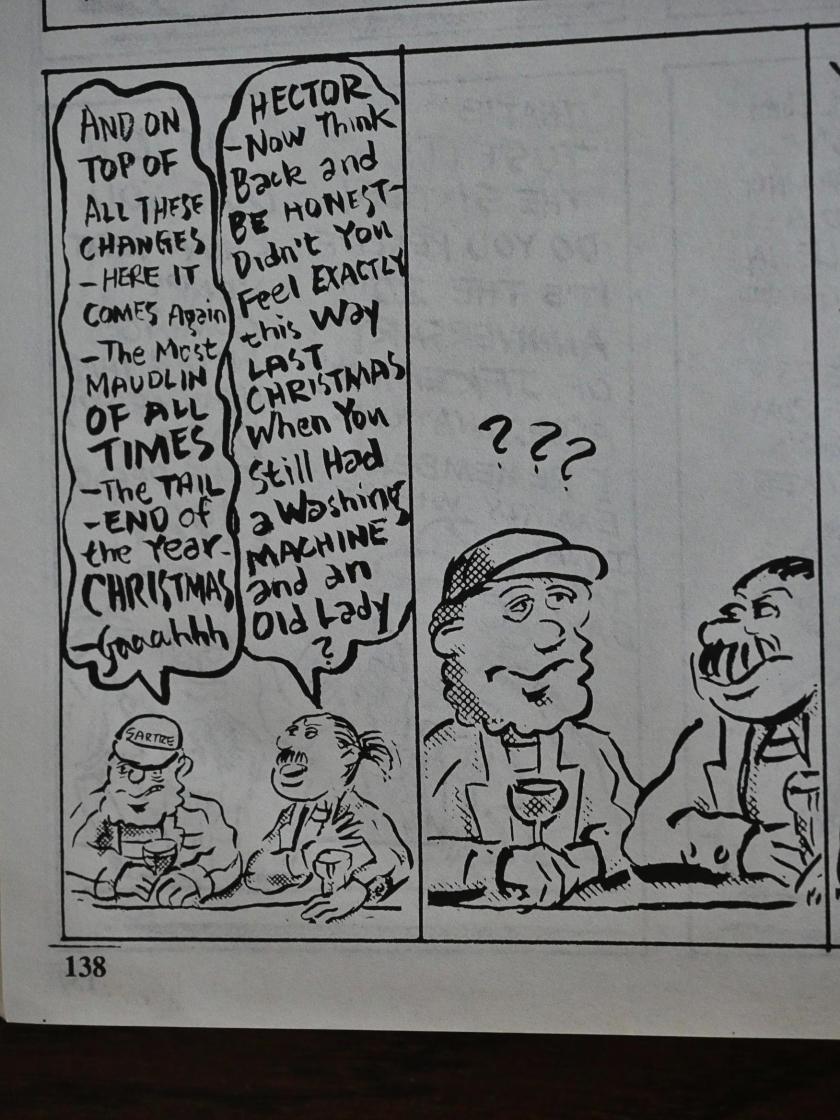 And then… he gets a divorce…

… and both the stories and the artwork fall apart, basically. It’s like all the fun and effort went out of both, and we get some very basic pages that, frankly, are a bit of a chore to get through.

We also get a section of illustrations he’s done for the Mendocino Review, and they’re fabulous.

His attempt at editorial cartoons are perhaps… er… not.

But then as a bonus, we get a handful of pages done in 1989, presumably specially for this collection, and his art style (if not the themes of his stories) revert to the 70s. So he still had it in him.

Googling Mervinius/Marvin Gilbert now doesn’t reveal a whole lot. This collection has never been reprinted, and his other work apparently hasn’t, either.

The only review I found of it is this truly moronic one:

The strip’s earliest days are 1975. Gilbert’s cartooning began as the work of an earnest amateur, his sketchy people loose, wobbly creations covered in randomly applied ben-day overlays and occasionally squashed into panel borders by word balloons filled to capacity. Over a decade and 150 pages later it hadn’t improved in any appreciable fashion.

What? Amateur? Ben-day overlays? Some people have 1) no taste and 2) no ability to read.