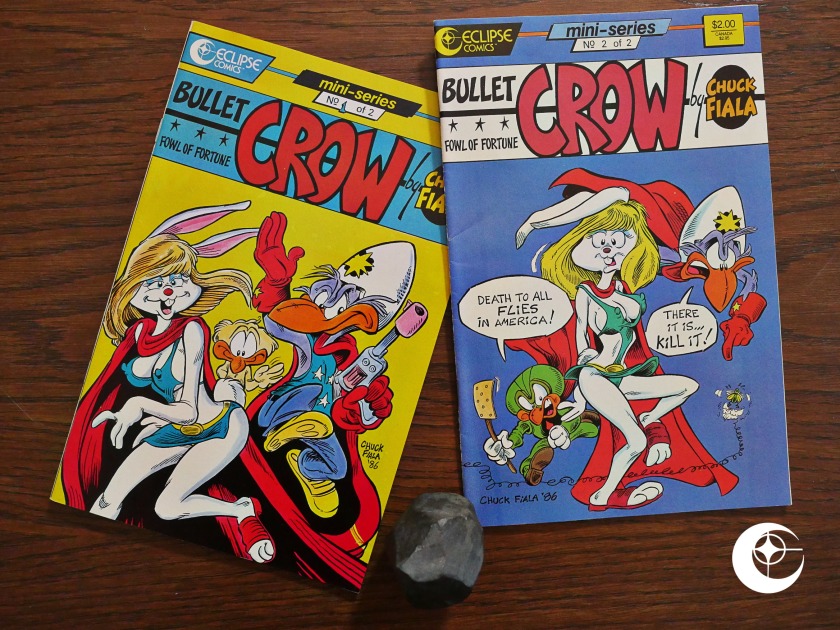 We’re now in March 1987, so the black and white boom had properly gone bust by this time. But with a three month lead time, these were solicited in December 1986, so I guess a lot of these shipped to stores that were then stuck with them. 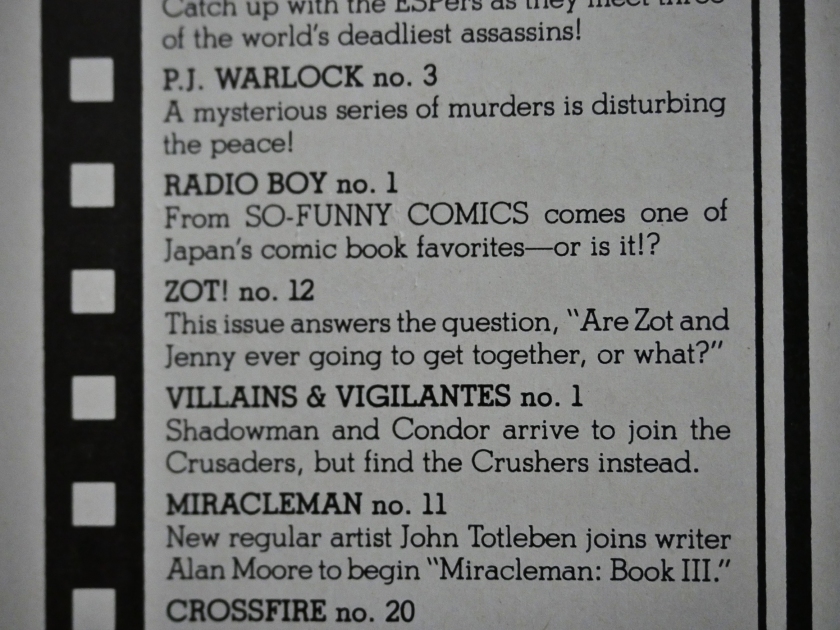 Just a little peek at the “On The Racks” section of the editorial inside-cover page. I like the one about Zot!. “This issue answers the question, “Are Zot and Jenny ever going to get together, or what?””. 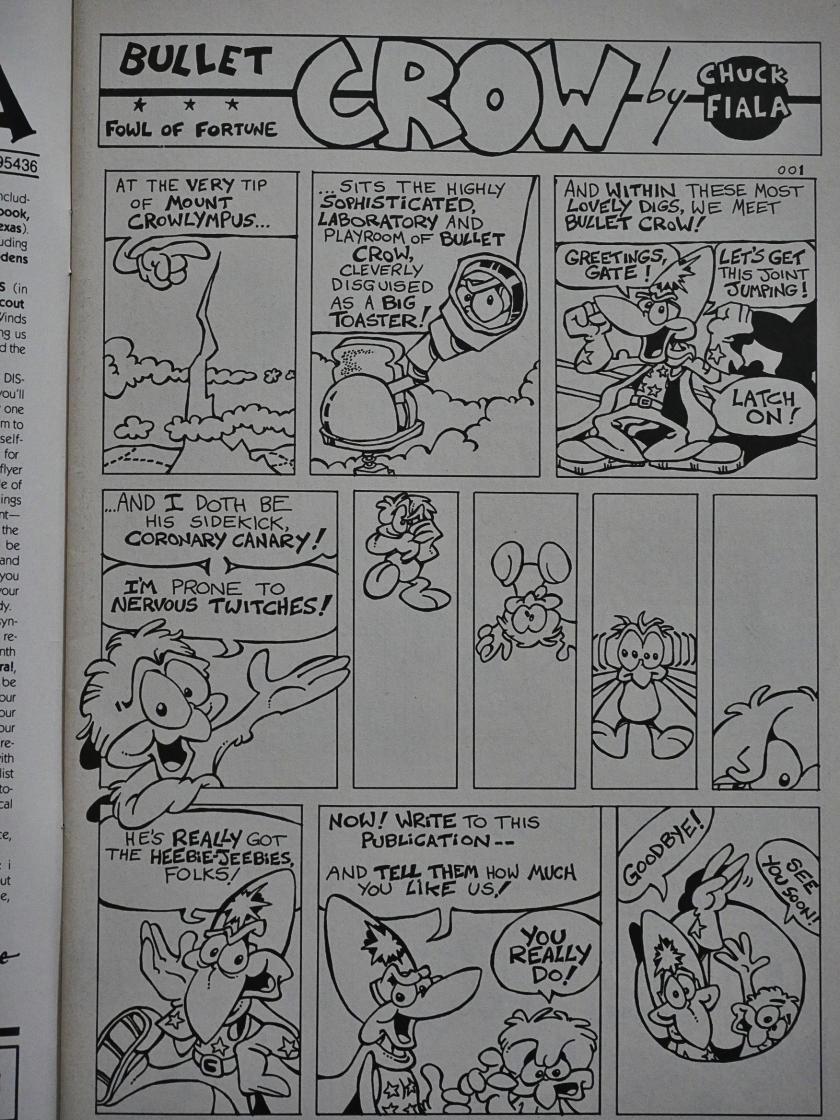 Anyway, from the format of these pages, I’m guessing that this is a strip that was running in a magazine or other, and that this is a reprint. As usual with Eclipse, there’s nothing in either the indicia or anywhere that lets you know that it’s a reprint, and from when or where. 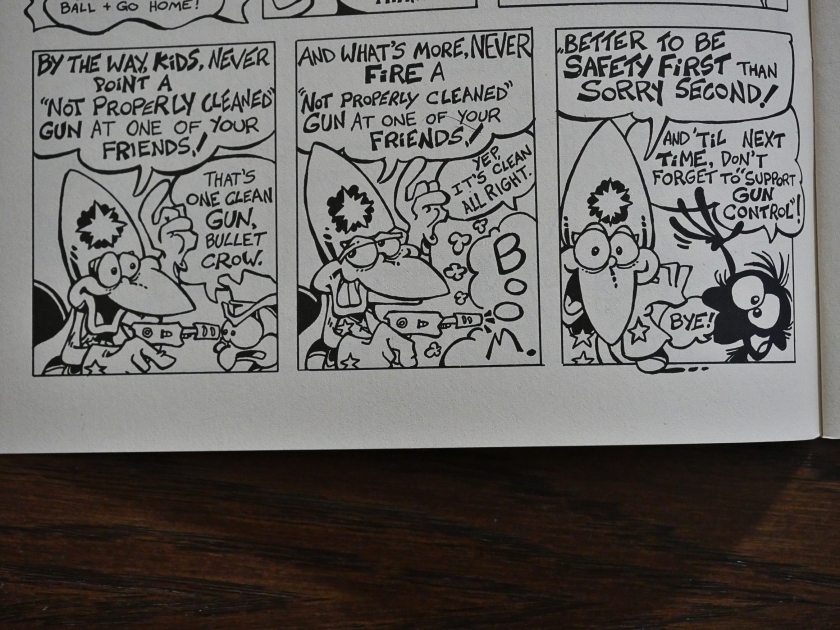 It starts off as a gag-per day strip, and I guess there’s a lot worse than these jokes out there. 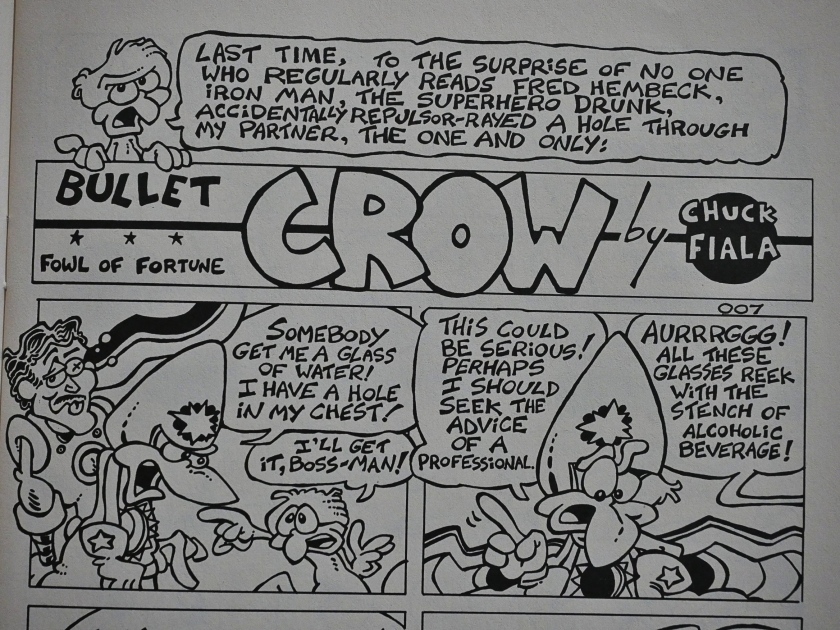 After some days, we get into Fred Hembeck territory, with Marvel’s Iron Man showing up for a handful of strips. He’s even name-checked in one of the strips, so I’m guessing this ran in a comics-related fanzine? Comics Buyers Guide, perhaps? 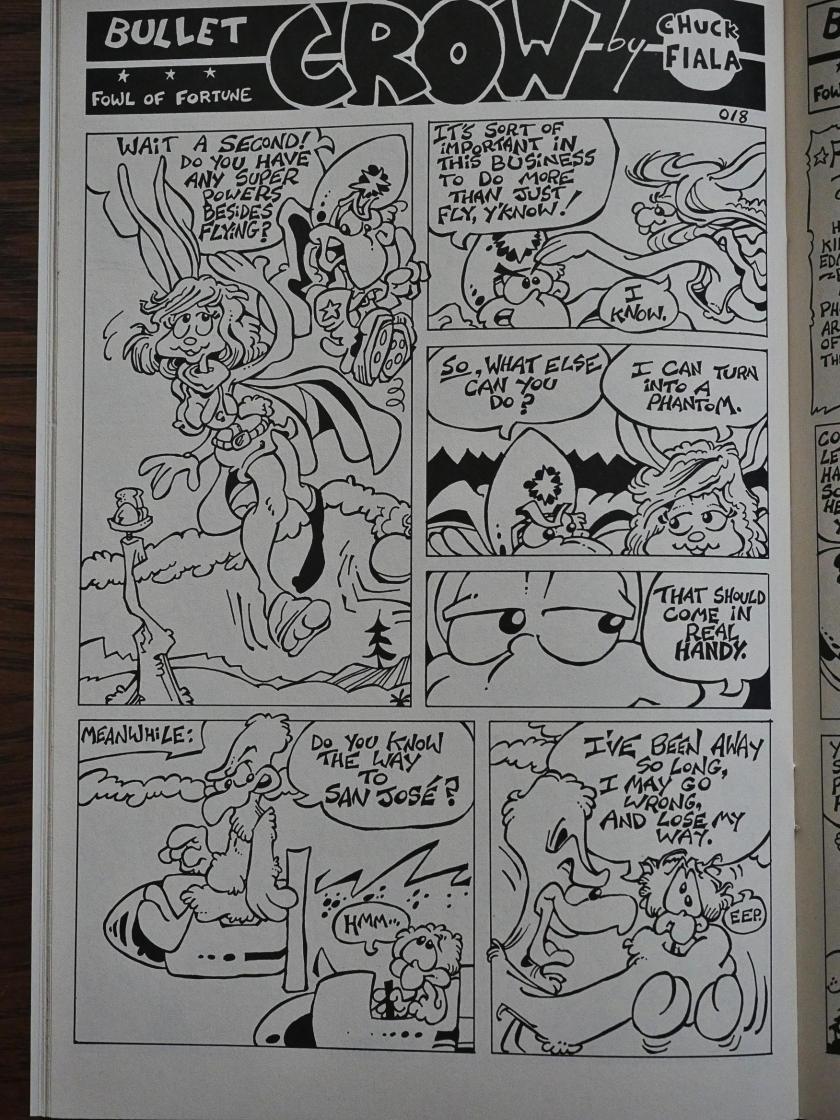 But after a dozen strips, we drop the gag-a-day format, and the rest of these two issues are, very vaguely, a continuing story. 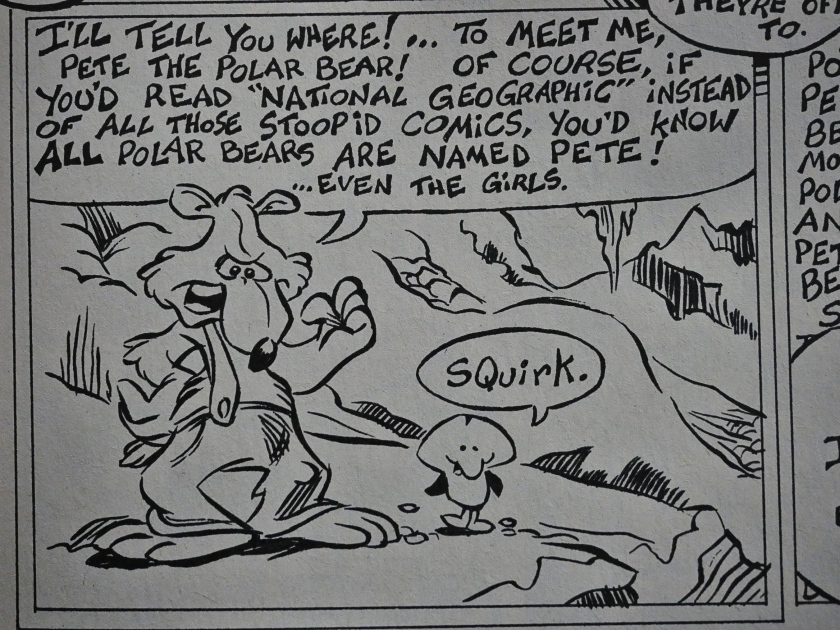 That’s supposed to be a polar bear. 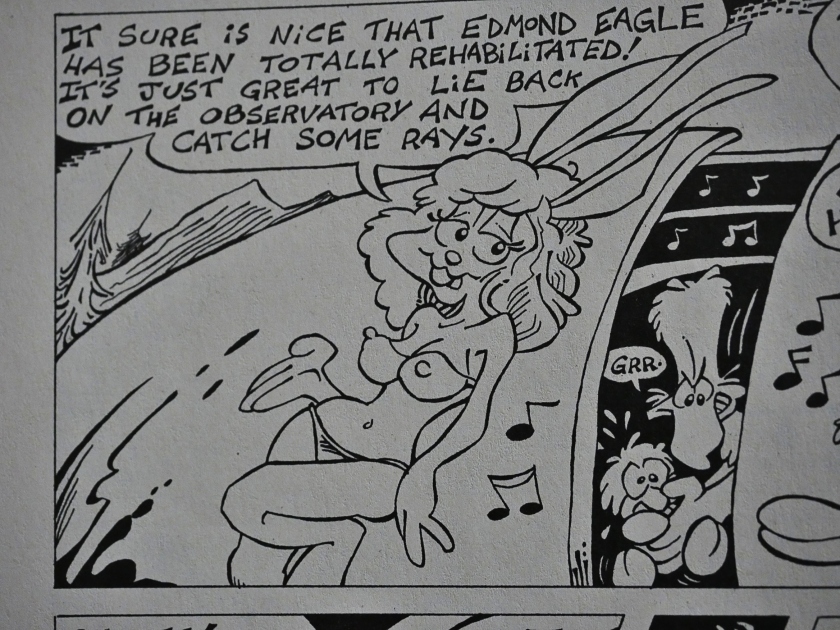 If I were to take a stab at the reason Eclipse thought this was even remotely publishable as a stand-alone comic book, I’d guess, first of all, “black and white boom”, and second of all, “well, that bunny has big tits”. 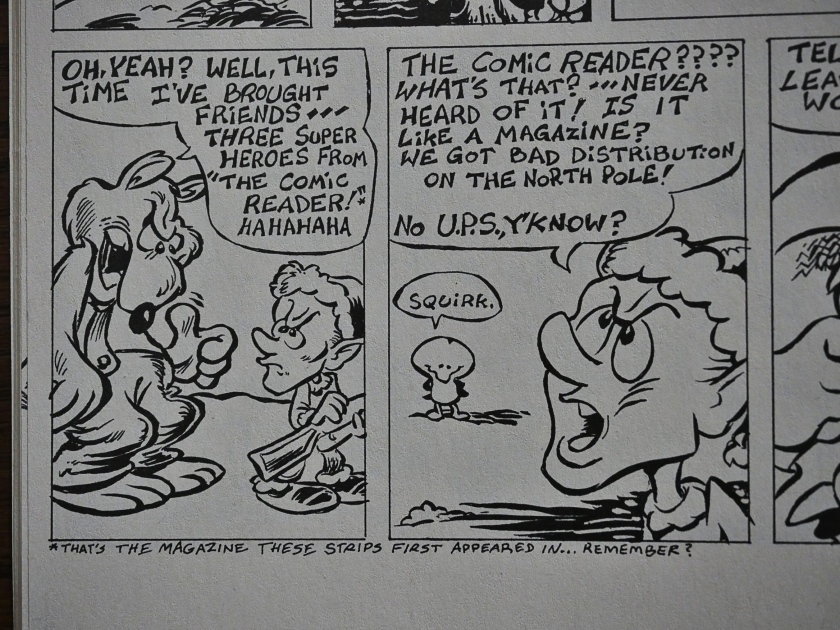 Aha! It’s a reprint from something called “The Comic Reader”! Perhaps I should do some research. The Comic Reader (TCR) was a comics news-fanzine published from 1961 to 1984. So these are old strips, too. 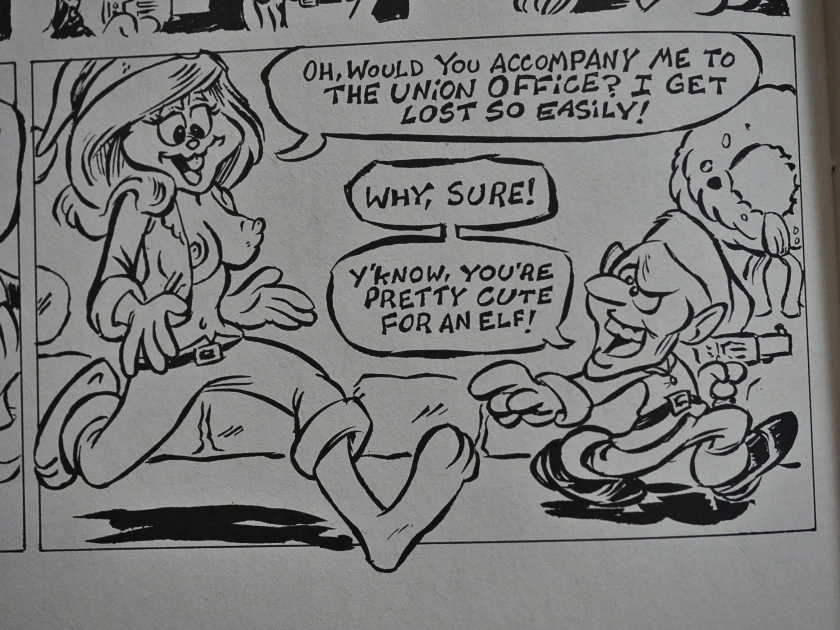 As the series progresses, those tits get ever more prominent. 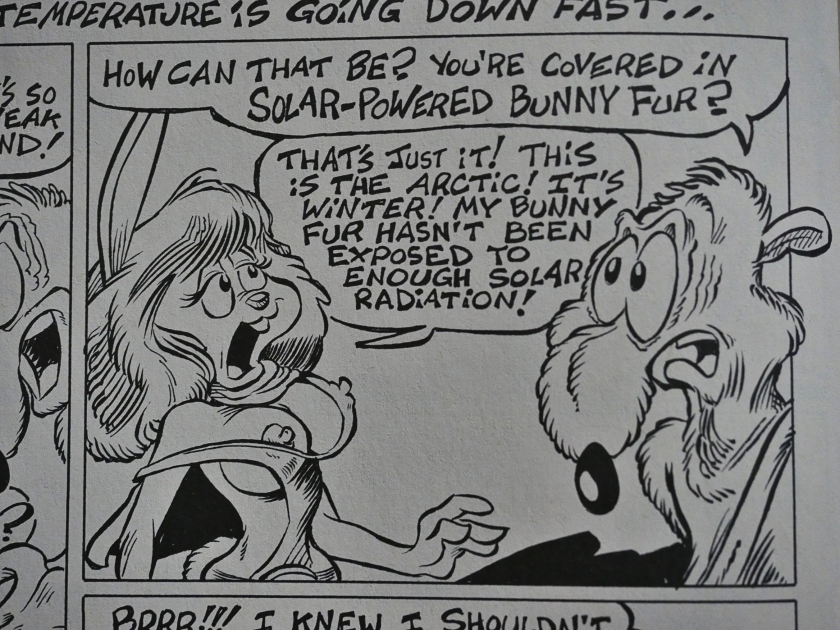 The last handful of pages look like they’re new, so perhaps this strip was cancelled over at The Comics Reader and Fiala finished up the strip here?

That would make sense.

And I don’t have any more to say about this comic (did I have anything to say?), so perhaps this is the place to drop some choice Gary Groth quotes I happened upon about Eclipse in this period generally.

This is from an essay that was published in 1987 in The Comics Journal, and you can read it all here, but let me just excerpt, at length, the stuff that’s relevant for Bullet Crow.

Eclipse probably wins the prize for strip-mining a fragile market, though. We know Dean Mullaney will say anything under oath, but will he and Cat Yronwode publish anything under the sun? Apparently so.

The real tragedy here — what separates Eclipse from the other schlockmeisters — is that the company was founded upon certain artistic principles. They weren’t principles I thought much of, but at least the company was obviously guided by discernible principles. Eclipse originally published graphic novels (or what passes for them) by upper-echelon Marvel hacks. Somewhere along the line — and I think the exact moment occurred when Eclipse adopted all of Pacific’s schlocky titles when that company went bankrupt — Eclipse sold out, adopted Marvel as their spiritual mentor and instituted the assembly-line system of creative manufacturing for their four-color comics. Since then, they have become shrewd hustlers with a line of soulless, mass-produced color comics — the kind Cat Yronwode would attack viciously in her old Comics Buyer’s Guide column — and black-and-white and 3-D comics, about which more later.

It would be funny if it weren’t so tragic. I mean, it looks like Eclipse will publish anything that looks like it has even the slightest chance of turning a buck. It doesn’t matter whether it’s work plagiarized from Jaime Hernandez or Vaughn Bodé; it could be superhero schlock like Champions or Airboy or New Wave (a kind of New Universe, Eclipse-style); anything in 3-D (the current favorite being the 3-D Stooges); the loathsome Adolescent Radioactive Black Belt Hamsters and other rodent-style books (like Guerrilla Groundhog); media tie-ins from role-playing games (Villains and Vigilantes) or money-making crap like Captain Eo, which conflates two mass-market icons of equally repulsive natures: Disneyland and Michael Jackson.

Heh heh. I covered the Hamsters here and Guerilla Groundhog a couple of days ago.

I don’t think there’s much to disagree about there, but then he goes on to say:

“Although the free marketeers will tell you that this boom in publishing activity proves the health and prosperity of the marketplace, what it actually proves are two propositions: the direct-sales market’s insatiable appetite for junk, and secondly, the entrepreneurial opportunism of anyone in the U.S. over the age of 12.” This appealed to English skepticism at unbridled economic exploitation, but Claremont immediately took umbrage and asked me if I was saying that these comics shouldn’t be published, to which I replied that of course they shouldn’t be published, that they were crap and that the less crap in the world the better.

It seems so ripe for whataboutism. Fantagraphics had already published less-than-amazing cash grabs like Doomsday Squad by now, and would go on to start an entire imprint to shovel out crap way worse than Bullet Crow (i.e., Eros, still going till this day).

The reason companies publish crap is that they want to make money, so no matter whether publishing crap is a good thing or not, the question is whether they use that money for worthy goals.

Now, Fantagraphics were (and are) the publishers of the Hernandez’ brothers Love and Rockets, and I think that anything a publisher does to stay afloat while publishing Love and Rockets is fine. If it takes selling crack to kindergarteners, that’s not crime in my book.

The problem is that Eclipse never published anything of that calibre. They published a bunch of books that I think are very good (Zot!, Beanworld, David Chelsea in Love), but those aren’t ends that defend all means. I mean, I could totally forgive Eclipse for selling molly to highschoolers, but that’s where I draw the line!

So I don’t really blame them for publishing books like this. On the other hand, the next book is Elf-Thing. We’ll see whether I survive that…