There’s no mention of Eclipse Comics in this book, so you may well be wondering whether I’m covering it in this blog dedicated to Eclipse… but Eclipse listed it in one of their “on the stands” columns, if I remember correctly. Or was there an ad for it in one of their comics?

And if you have a peek at the indicia here, the publishers are the very respectable-sounding (but somewhat generic) “Cohen & Cohen Publishers”… but post office box they list (1099) is the same that Eclipse Comics had in Forestville.

If you Google for “cohen & cohen publishers”, you’ll find that this is the only book they ever published, so I think it’s a safe bet that that company never had any existence outside of doing this book, which leads to the question: Why didn’t Eclipse just publish it under their own name instead of being semi-stealthy about it? They’d published a number of trading card sets that dealt with the same subjects (the US and the CIAs illegal drug wars), so it seems unlikely that it had anything to do with being afraid of getting sued.

But I have no idea, really. I’m just guessing here based on very little data, because I can’t find anybody talking about this on the web. It could be as simple as Eclipse believing that they’d get greater distribution under a more respectable name, or it could be that Cohen & Cohen actually existed and financed the book, and Eclipse just handled the practicalities of printing and distribution. 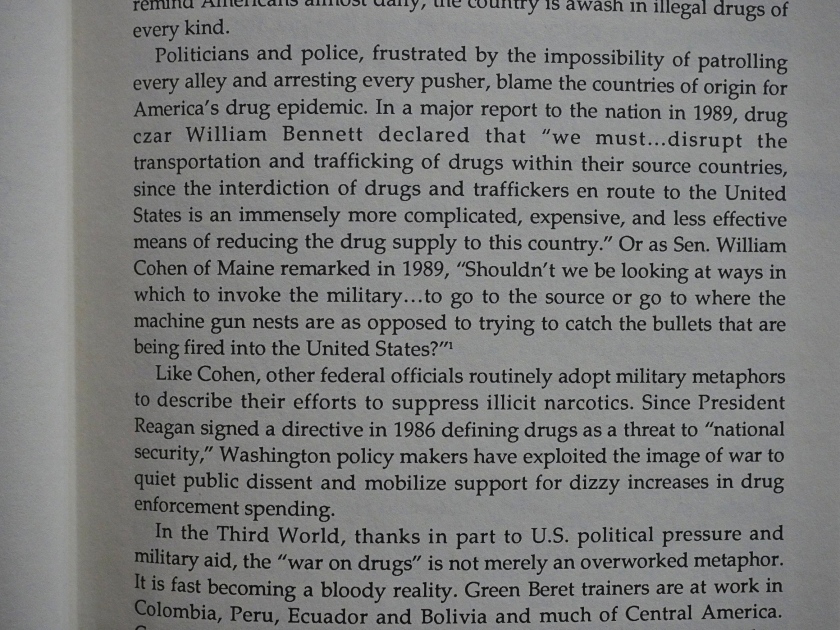 Apparently, Jonathan Marshall’s only previous association with Eclipse Comics was writing the introduction to the Brought to Light graphic novel.

This is a short book; the main text is a bit more than 60 pages, and then there’s a dozen pages of references and an index.

The subject under investigation is the American doctrine of stopping drugs from entering the US by “encouraging” other governments to crack down on narcotics production.

But other things often take priority. Whenever there’s a communist guerrilla or government somewhere, the US will support whoever is fighting them, even if they’re drug runners (which they usually are, according to this book).

So it’s all kinda a mess, even if the CIA were competent at what they’re doing, which they aren’t.

I didn’t fully read this book, because so many of the points being made are very familiar. This seems like a well-researched book, and it’s well-written, but it’s not exactly compelling book. Marshall doesn’t really build up a narrative as much as relate anecdotes, and that’s fine. The world isn’t a story but just one damn thing after another. 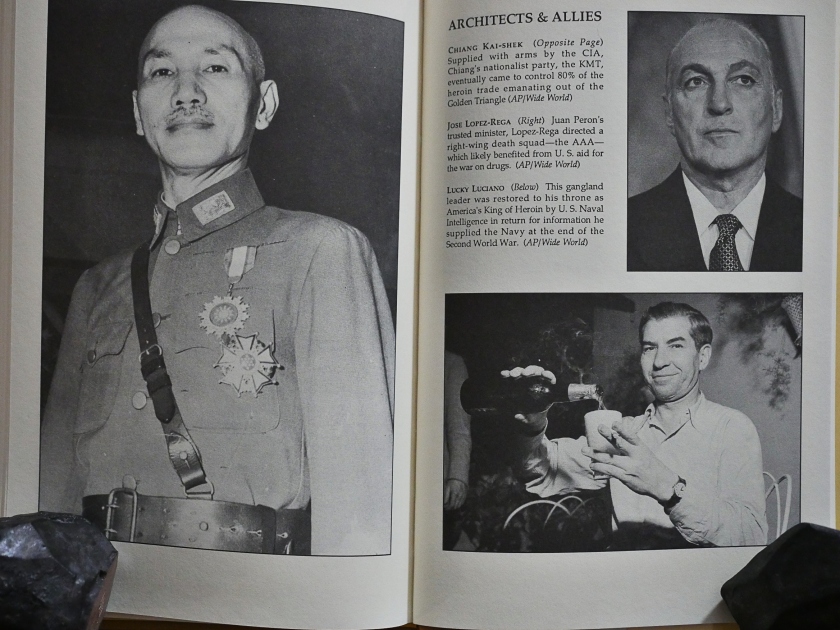 Oddly enough, we get a several pages long gallery towards the end that doesn’t seem very… er… apposite.

But we also get so many references. It’s not an excessive amount for an academic book, but there’s an unusual amount for a book outside that sphere.

It doesn’t seem to have made much of a splash. I could find only one other reference to it on Google Books. It is available on Kindle, though, and has the following review on Amazon:

In this brief but finely detailed volume, investigative journalist Jonathan Marshall marshals his hard evidence demonstrating the counterproductive and corrupting nature of the U. S. War on Drugs.

Amazon also has a large number of brand-new hardback editions of the book for sale.

Marshall doesn’t seem to have published anything after 1995.