All the new comics from Eclipse in 1992 are either action/adventure type things or parodies. So this must be a parody.

Yup. It’s about Lobo challenging Wolverine to a wrestling match, and hilarity ensues.

But I do think that Gary Yap’s artwork is intriguing. It’s like a mixture of things I can’t quite put my finger on… It’s like Matt Howarth crossed with Ted McKeever, with a dash of Rick Geary, only in the 70s. It’s very peculiar, and I think it’s rather attractive.

As with Schiller’s other parody book from Eclipse in 1992, Blandman, this isn’t really that much of a parody of the titular characters as it is a more freeform commentary on comics publishing in the US at the time. It’s true; Marvel Comics pushed Wolverine heavily at the time. 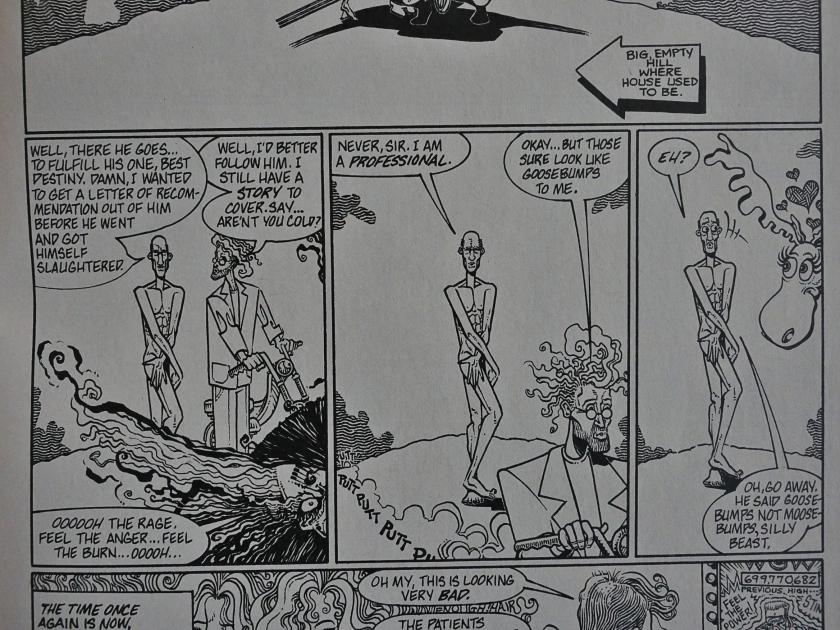 But while I find the antics kinda amusing, I perhaps think that Blandman was a bit better thought out. It seemed to have more of a concept behind it, while this one doesn’t really seem to go anywhere, despite having a solid story structure. Or perhaps it’s just that the jokes aren’t good enough.

And, of course, we get to visit some other random comics, like Cerebus. Yap doesn’t do a very good Sim, but he does do a good Liefeld a few pages later.

The cover is a reference to the Muhammed Ali/Superman thing, I guess? See if you can recognise all the people Yap bothered to draw!

As usual with these late-stage Eclipse comics, I can’t find anybody on the web that talks about them, so I can’t really gauge whether they were well-liked or not. The pre-common-availability Internet is a murky past.