Tales from the Plague (1986) #1 by Dennis Cunningham and Richard Corben.

Hm… No Eclipse logo on the cover?

Ah, co-published by Bill Leach Studios. Which reminds me: I should probably mention at some point what my criteria for “Is this an Eclipse book?” is.

Eclipse distributed a couple of dozens of books that they didn’t publish themselves, most noticeably the Ken Pierce collections of old newspaper strips (Modesty Blaise, Axa, etc). These are often listed in the back issue ads in the Eclipse books, but since they’re not Eclipse “proper”, I’m skipping them in this blog series.

I’m also skipping series like Spaced, that do have the Eclipse trade dress, but where the indicia says that it’s not published by Eclipse, anyway.

But this book is Eclipse-ish, so let’s get on with the reading.

The first thing you notice about this book is how text-heavy it is, and what annoying scripts they’ve used to letter it. The “normal” speech bubble lettering is uneven and ugly, and the oldee tymey script is irritating.

The second is that this seems to have been drawn for a much smaller size: The lines of the artwork are crude and coarse.

It’s also often hard to parse: I thought that was just a torso floating around, but I guess those lines going down from the torso are meant to indicate a skirt? 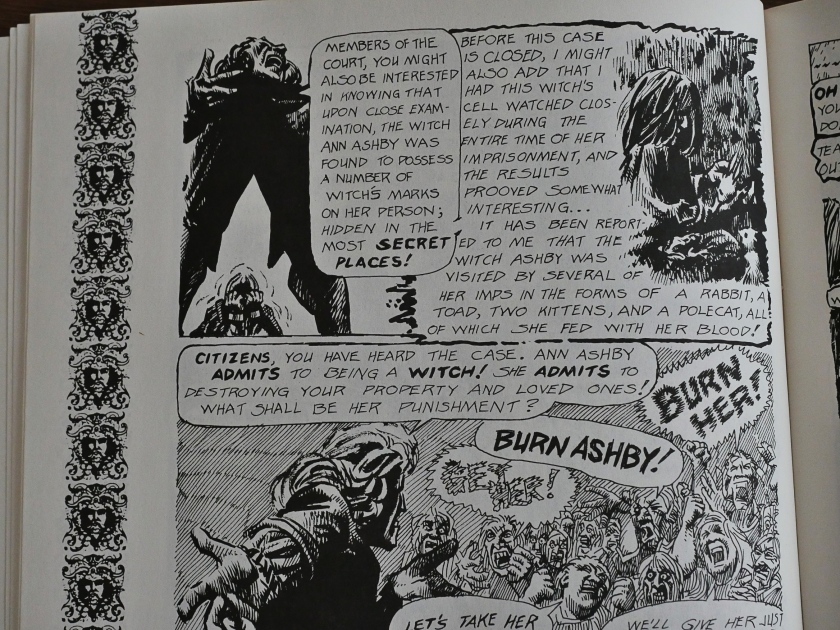 Storywise, it’s a “found manuscript” framing, where we first get the story from the point-of-view of a man who’s responsible for burning a real witch (as he sees it).

Corben’s artwork improves by leaps and bounds over the pages. Where in the start it was scratchy and amateurish, once we get to the gruesome Black Plague pages, he really makes and effort and goes to town.

In the second part of the book, we switch to yet another annoying script, but this time it’s from the point of view of the accused witch who (spoilers!) turns out to be a pre-renaissance scientist trying to combat the Black Plague and not a witch at all. That’s irony, huh?

While this book really isn’t worth reading (at all), the ending is somewhat affecting. 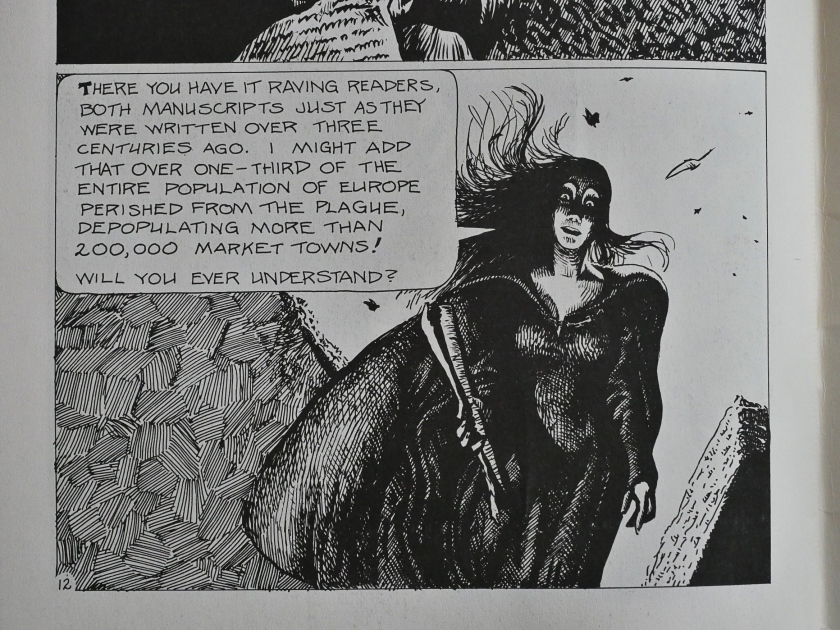 And based on true, found manuscripts! Huh! They wouldn’t lie to us, would they?

I thought this was a rather weird book to be publishing, but here we get the explanation: It’s Corben’s very first published work from way back in 1969. Which explains neatly why the artwork really sucked at the start but then grew better as the pages kept rolling past.