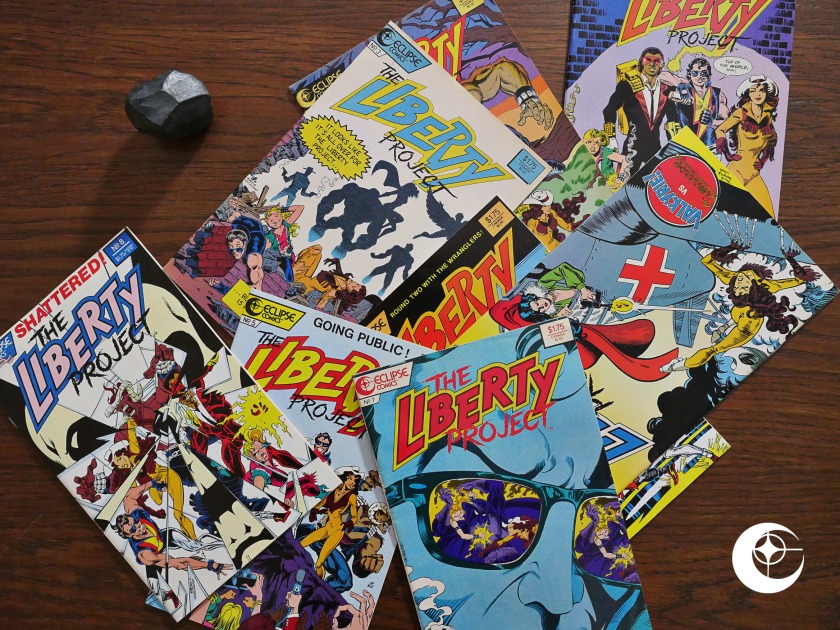 Eclipse was pushing this series hard in the in-house ads around this time, and I was a bit intrigued. One of the tag lines were “The X-Men done right” or something like that, which is a pretty big boast.

But what we have here is a Suicide Squad kind of setup: A researcher sets up a super-powered group by scouring the prisons for promising super-villains, and promises them freedom(ish) in exchange for doing what he says. It’s a tightrope to walk: If the villains are too psychotic, it doesn’t make for a happy-go-lucky superhero team book, and if they’re not villains at all, it all fizzles. I think Busiek and Fry gets it pretty much right: They go rebellious characters and not very… evil ones. 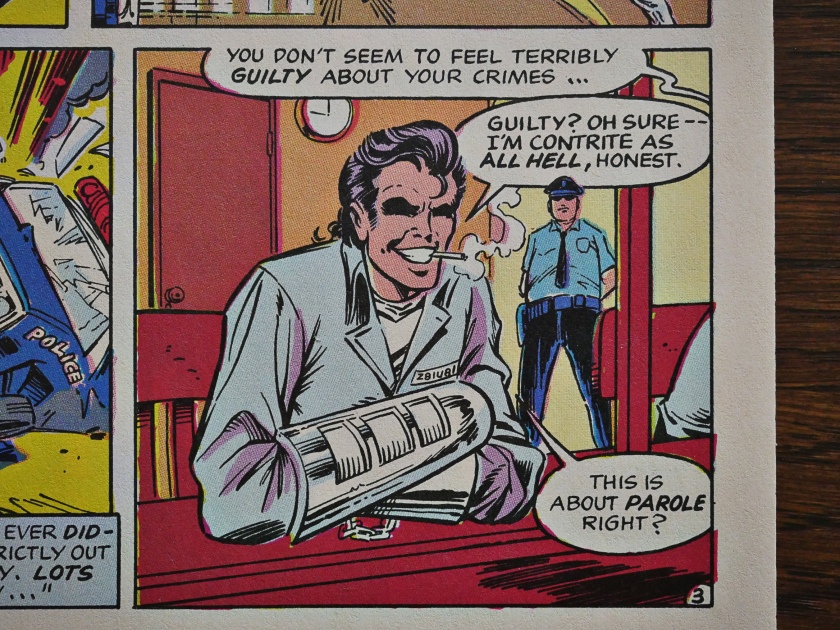 And they establish all the requisite distinct characters a group like this has to have, and they do it very economically so that they can get the show on the run. 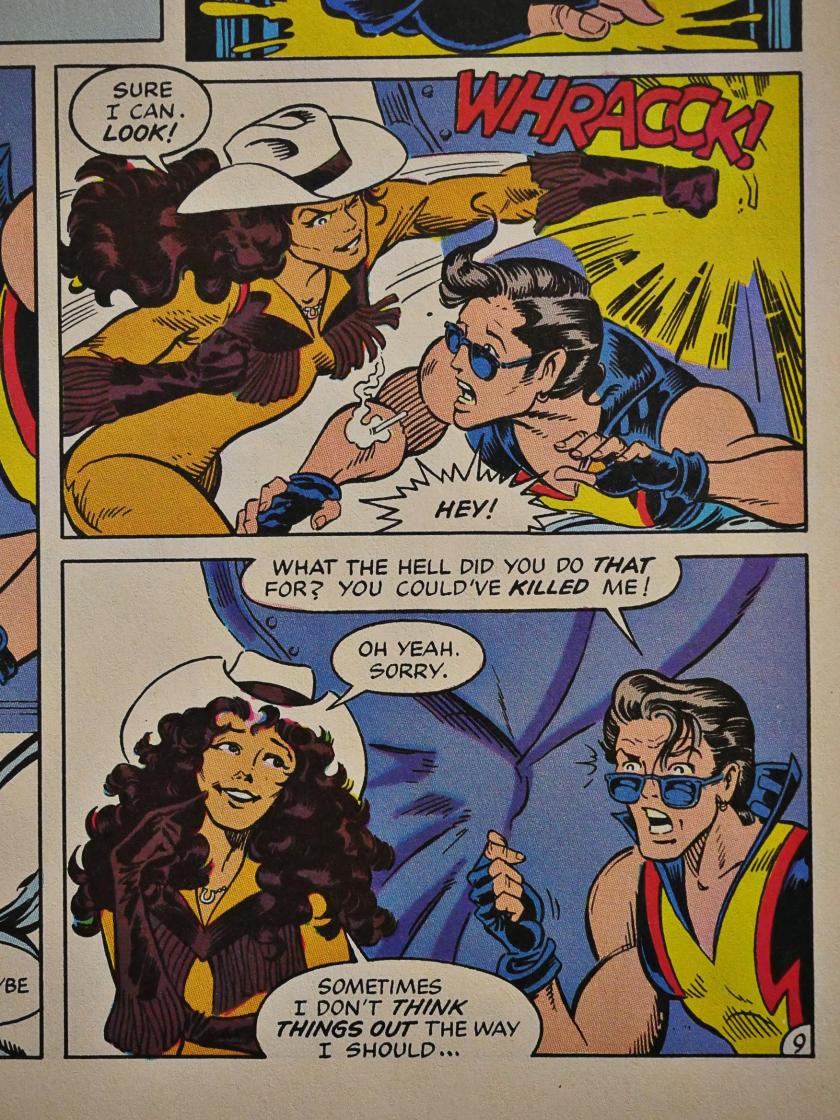 I know, it doesn’t break any new ground, but as super-hero comics go, these are definitely above the pack. The issues have an easy flow and the humour is balanced well against the action and the small stabs at intrigue.

*gasp* Did they disband in the very first issue!??! Read the next one to find out! 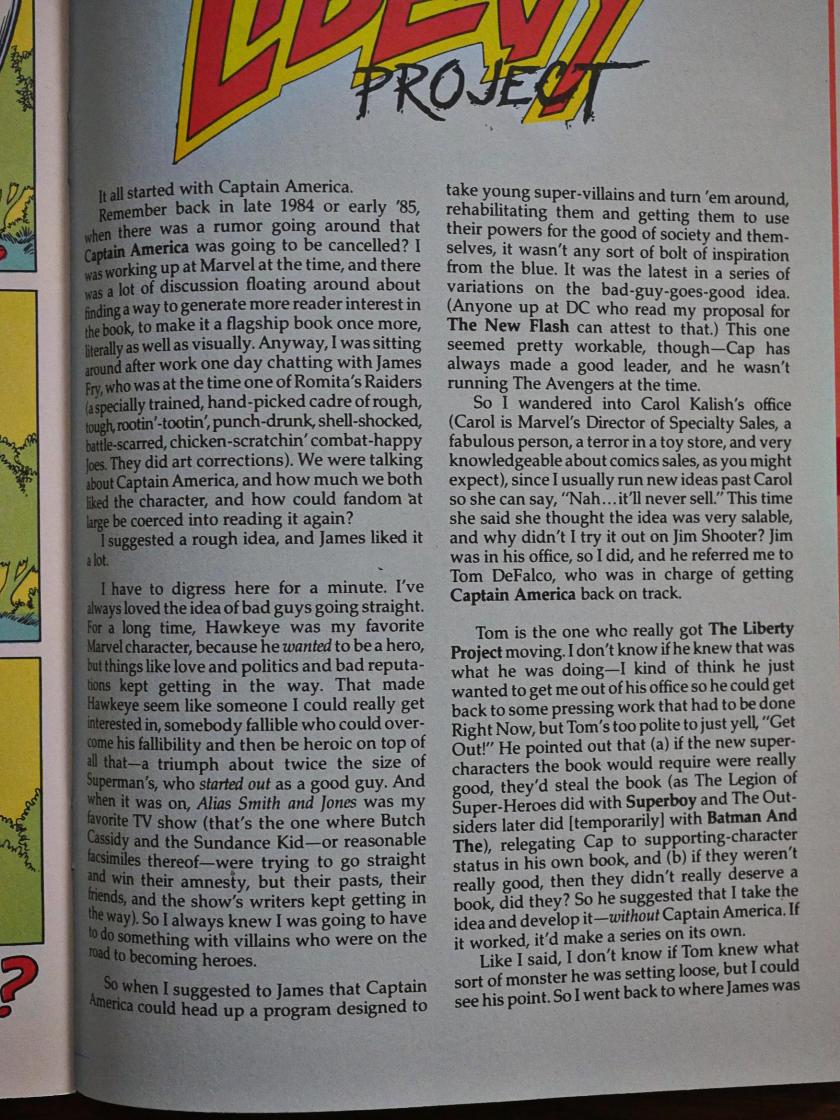 Busiek explains that the series originated as a pitch for Captain America over at Marvel Comics, but when that was turned down, they made it into a freestanding series and pitched it to many companies, and Eclipse made the best offer.

Busiek says that he’s got an outline for more than thirty issues. 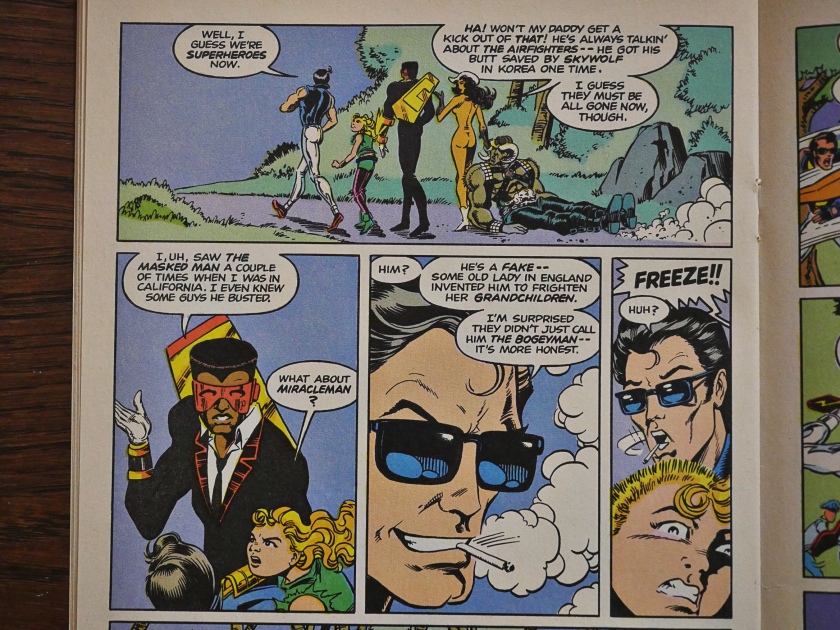 I wonder how much the Eclipse people were thinking about establishing a shared universe between their more superhero/adventure comics. We get references to DNAgents, Airboy and The Masked Man, for instance. And Miracleman, who was invented by an old lady in England.

Yes, there are hijinx, but Busiek manages to get some character development in at the same time. It’s very… competent.

No sex, even if it’s no longer a Marvel pitch.

Pop culture references abounds, and some have perhaps not aged as well as others.

Fry’s artwork is competent, clear and moves the storyline along, but I don’t find it very exciting. It’s standard 80s superhero stuff. But as the series progresses, he gives the figures a more exaggerated look, almost as if he’s predicting the 90s Image look with super-small waists and all feet hidden. He just needs some pouches around the thighs and he’s there. 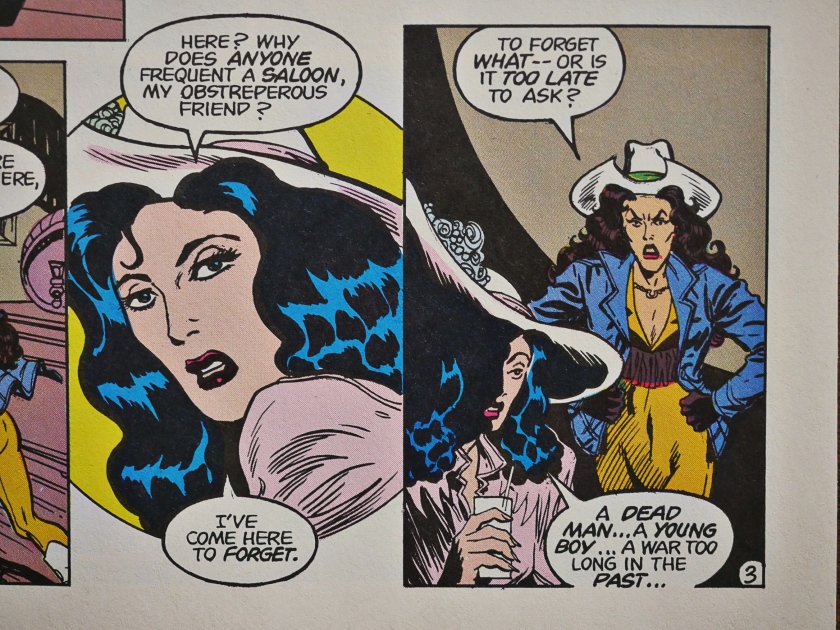 The sixth issue is a fill-in issue with artwork by Richard Howell (the guy behind Portia Prinz of the Glamazons. It’s a crossover with Valkyrie (from the Airboyoverse) and has nothing whatsoever to do with the Liberty Project storyline. I guess it makes some sense to create a totally freestanding issue so that when you do the collection, you can just drop out the issues not drawn by the regular artist. If you want to. 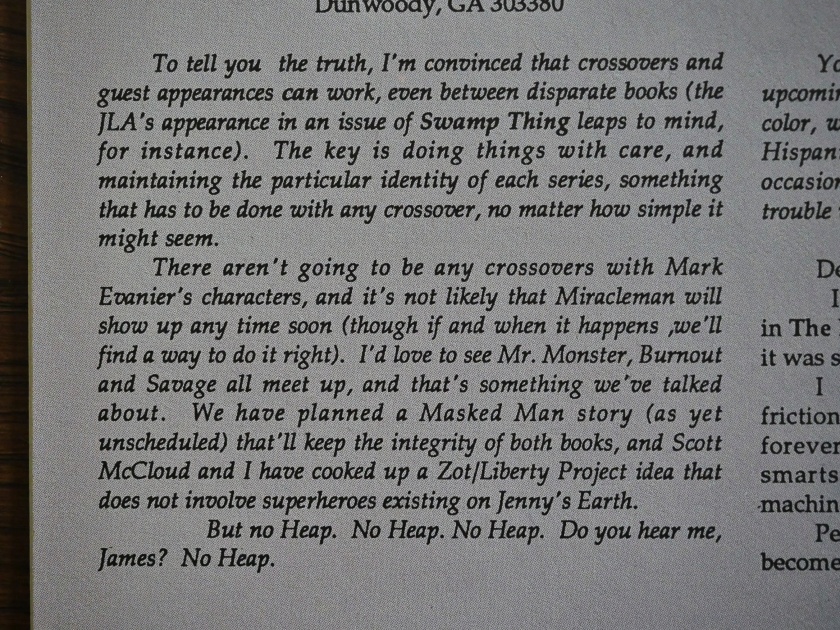 A reader asks whether there’s going to be a lot of crossovers and Busiek says “probably”, but never with Heap. Ever.

Up until the seventh issue, the schedule had been monthly, but before the eighth (and final) issue, there’s a five month gap, and every thing is changed. 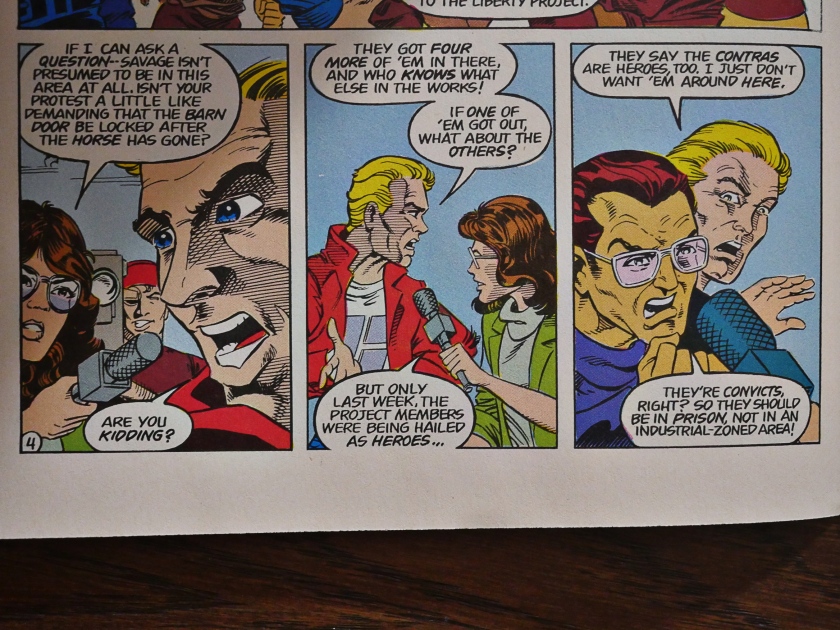 Instead of having a fun-loving (slightly angsty) super-hero team, suddenly everybody in the world hates them and everything is super-grim and… 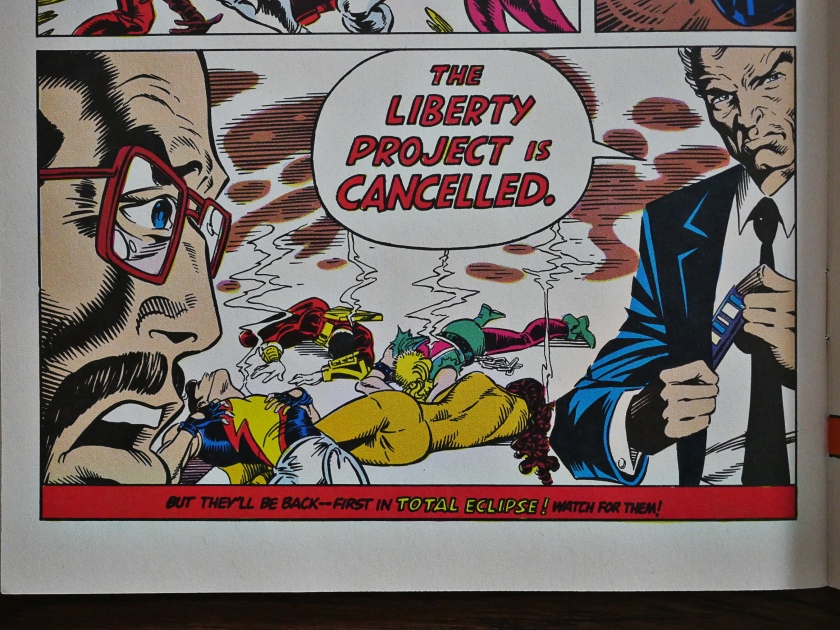 … then the series is cancelled. It’s such a weird way to end the series: There’s no backmatter to explain what’s going on, and Busiek had been very chatty in previous issues. But why end things on such a sour note, anyway? The issue is just a slog to go through. 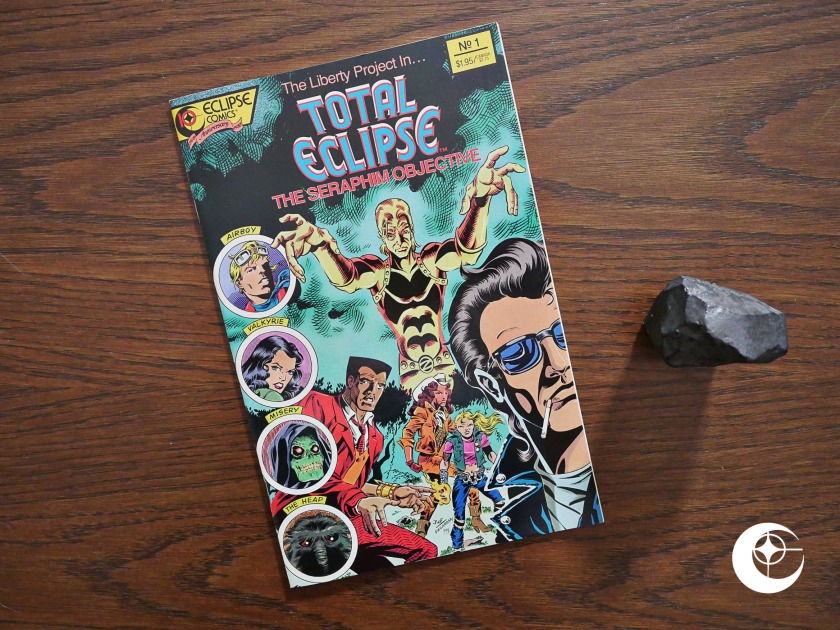 And speaking of slogs, the mega-crossover series Total Eclipse was published in 1988, and spawned one spin-off title: The Seraphim Objective.

Which, amusingly enough, starts with Heap, the character that Liberty Project will never cross over with.

Most of the pages are like the ones above: We get a voiceover from a character or another that provides incredibly tedious exposition.

The inker and or colourist has a lot of fun pretending they’re doing a Rand Holmes book, at least.

I’m glad that somebody had fun while doing this, because it’s no fun to read. 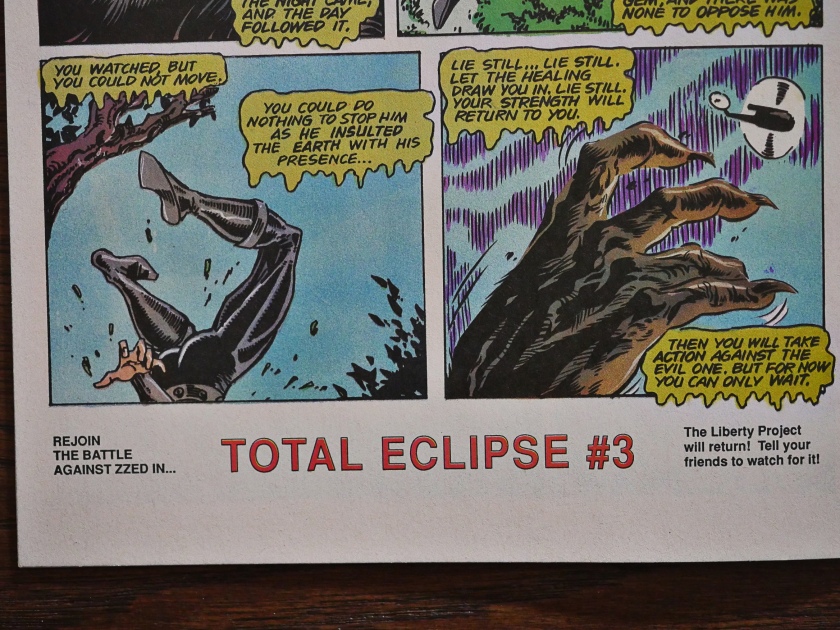 But the Liberty Project never meets Heap, so I guess the gag paid off.

The series (including the Total Eclipse spinoff) was collected by About Comics in 2003 (in black and white, apparently).

The promise that “The Liberty Project will return!” didn’t turn out to be accurate.