In its declining years, Eclipse published more trading cards than comics. The most controversial of these were the True Crime card sets. The introduction to this book explains:

I’m assuming this is written by Eclipse editor-in-chief cat ⊕ yronwode, because it reads like her text. The explains that even before the cards were published, Eclipse was subject to a hatchet job on Entertainment Tonight (complete with fake video)… which sounds… er… somebody should try to dig out that video and post it on Youtube, because it sounds in-credible.

Anyway, what does sounds credible is that lawmakers throughout the US (and Canada) tried to enact laws to stop these outrages against decency, and that most of them faded away. Nassau County were the only ones who got a law into the books, and you could apparently get a year in jail if you had any of these trading cards. 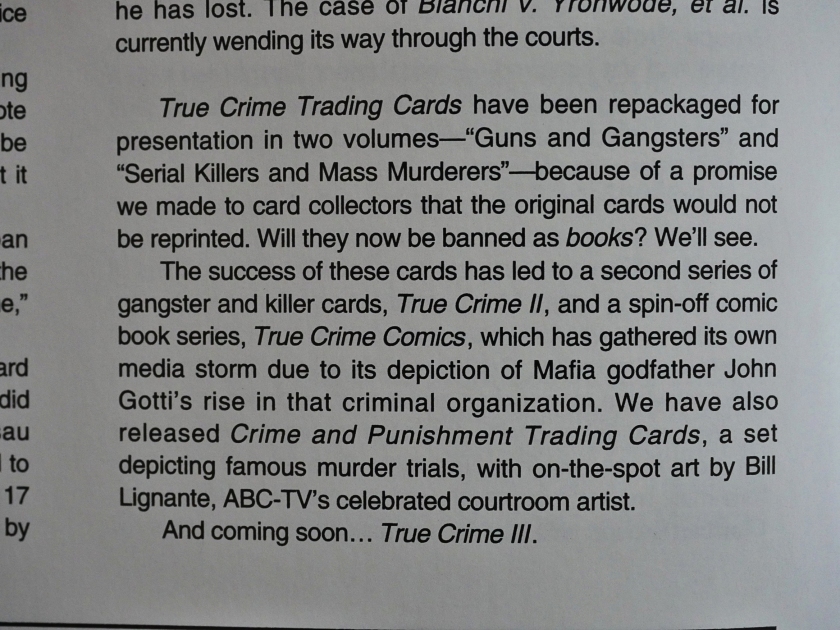 And here’s the explanation for why this book exists: Eclipse had promised not to reprint the trading cards (presumably because that would devalue the “collectability” of the cards, so they instead reprinted them as small booklets.

The one I have is all about mobsters (mostly from before World War II), and is therefore not very controversial. And it’s not very interesting, either, in my opinion. As trading cards, even if they are boring recitations of historical facts, there’s at least something about the format that has some kind of interest. Max Allan Collins’s writing is very dry.

As booklets, there’s… Not a lot to hold my interest. The artwork is nice and all, but it’s uninspired to the extreme.

There’s a few pieces where Paul Lee perks up and does something interesting, but they’re far between.

The booklet series was apparently not very successful for Eclipse, because they only published two of these?

The second booklet has all the controversial stuff, and is written by Jones and Collier. While the first booklet is a staid presentation of random mobsters, this is a gallery of mass murderers and serial killers, many of them still living.

We get a bit pop psychology…

… but mostly page after depressing page of uninteresting assholes, with a short text of their trivial stories.

We also get a few war criminals, which is a bit more interesting.

Bright has one single approach towards depicting these douchecanoes: A painting traced from a photo with some blood spatter beneath.

Jones and Collier write these textlets well, but the combined tedium and nausea made me bail on reading this after a dozen cards or so.

While the attempts at banning these cards were ridiculous, but so was publishing them. It’s the most distasteful cash grab in Eclipse’s story, and that says quite a lot.