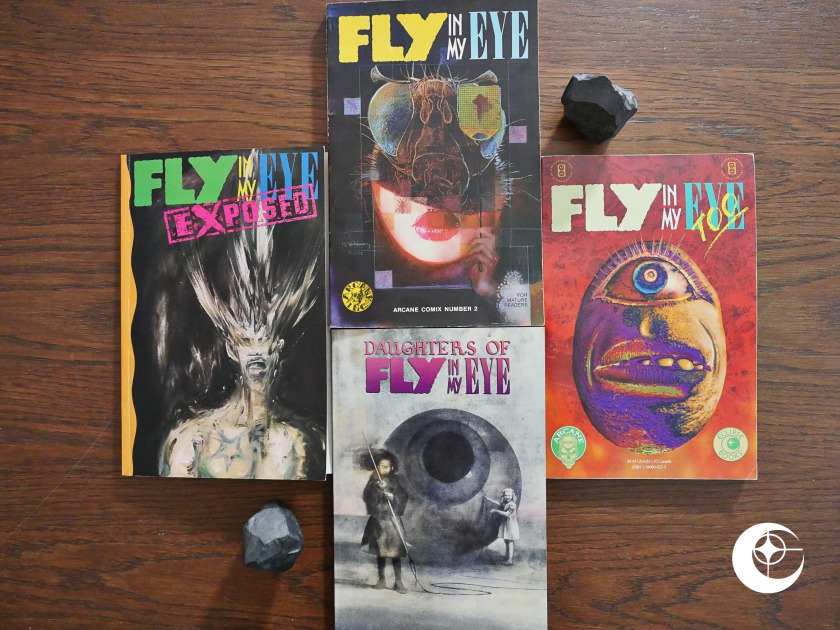 Steve Niles is well-known these days as the creator of such horror series as 30 Days of Night, but in 1986 he started Arcane Comix and published a small number of books. Fly In My Eye is the most well-known of these, and Eclipse co-published the last three issues.

But let’s take a look at the first issue, too, even if this is an Eclipse blog.

Niles claims that he simply told the contributors “Do what you want”, but I have to pedantically point out that he probably told them more than that, since everybody gave him a horror story. More interesting is that he announces two Clive Barker adaptations, Rawhead Rex (by Steve Bissette) and The Yattering and Jack by John Bolton and Eric Saltzgaber. These were both published several years later by Eclipse comics… but both adapted by Niles himself, and while Bolton did the artwork on Yattering, Bissette didn’t on Rawhead Rex: Les Edwards did instead.

OK, perhaps I exaggerated by using the word “interesting” here, but it might explain something that I’ve wondered about: How did Eclipse get the rights to do a shitload of Clive Barker adaptations? Barker was really hot at the time (what with Hellraiser being a sensation in 1987 and his Books of Blood getting horror readers all excited).

But the connection came via Steve Niles, who apparently had already hooked up with him (license wise) before he blew up?

It’s not the first time these things have been “grandfathered” in at Eclipse, like how Miracleman ended up there by them buying the rights from the bankrupt estate of Pacific Comics.

Aaaaanyway. Let’s look at the book itself. It’s thick (220 pages) and cheap ($10), so you have to wonder whether the contributors got paid much. But there are so many big name artists here? Waaat?

But then you start reading and… Like here, for instance, is a reprint of an old Bissette story (from 1985).

Clive Barker is represented by a selection of pages from his sketchbook. The introduction tells us that Barker isn’t a horror writer, because, er, No True Horror Has Horrible Creatures With Human Feelings. 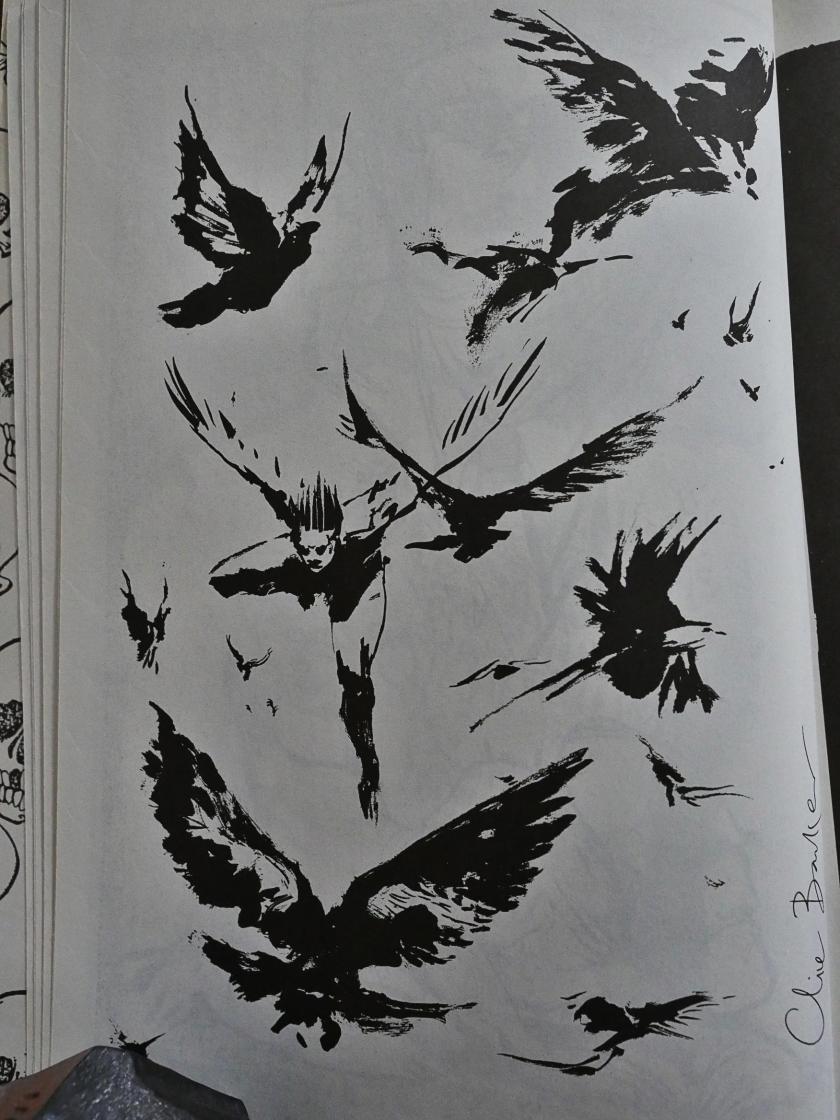 But the sketches are quite lovely. 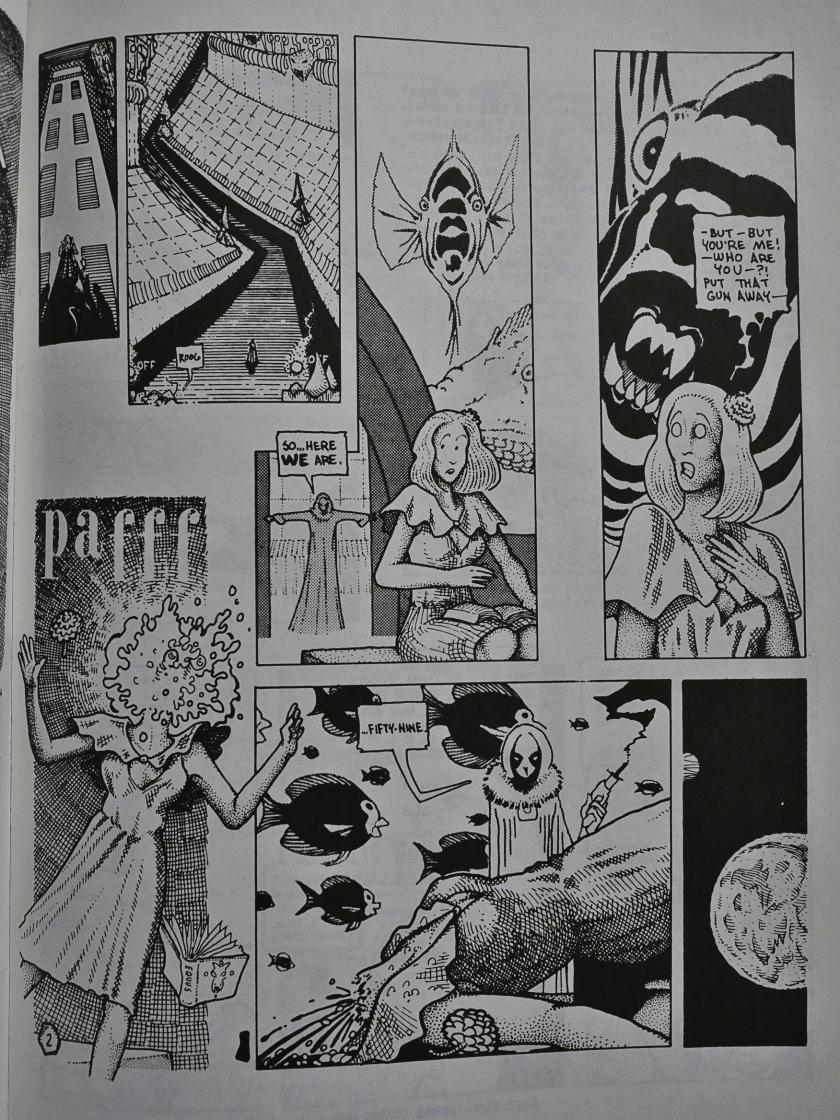 Matt Howarth, the only artist who appears in all four issues, is represented with a story that I would guess, based on the art style, is from the late 70s or early 80s. (I couldn’t find any date.) 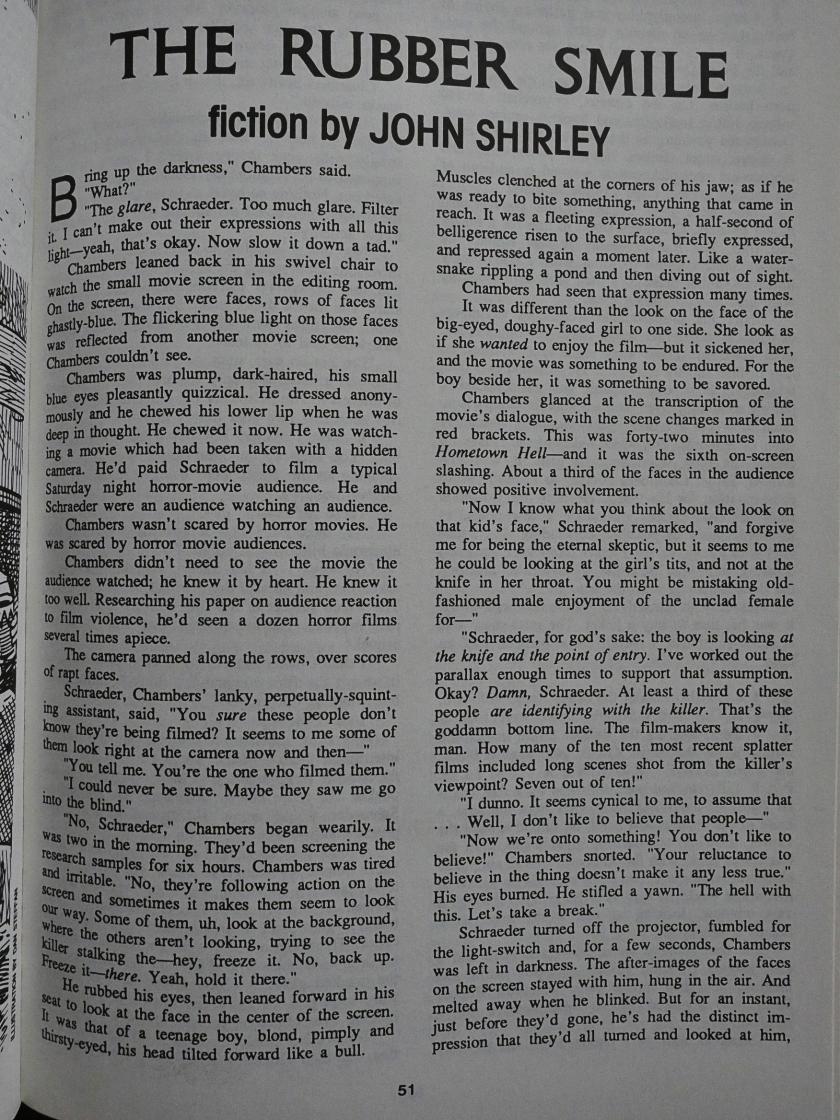 There’s a horror short story by John Shirley that’s quite creepy, but it’s the kind of O’Henry twist ending that you see coming up a few pages before the end.

Ted McKeever supplies a few freestanding drawings that may or may not have been taken from Eddy Current-adjacent work.

Geez. A Peter Kuper piece from 1980, drawn in a style that I didn’t know that Kuper ever did, so that’s interesting.

But are you starting to see a pattern here? Yes? Yes. There’s a bunch of “name” contributors here, but all their work is stuff that they’ve rooted out from the bottom of their socks drawers. It’s either sketches, portfolio pieces, or it’s old, old work.

The only newer pieces are things like this… thing by Larry Chambers and Edward Griffin. Like many of the contributors here, they seem to be British (or at least the story’s set in London), and it’s a huge 60 pages, which can work in a 220 page anthology. (There are also single page pieces in here.) The only problem is that it’s, er, not very good.

At least this short piece by Kurt Sayenga has good advice. 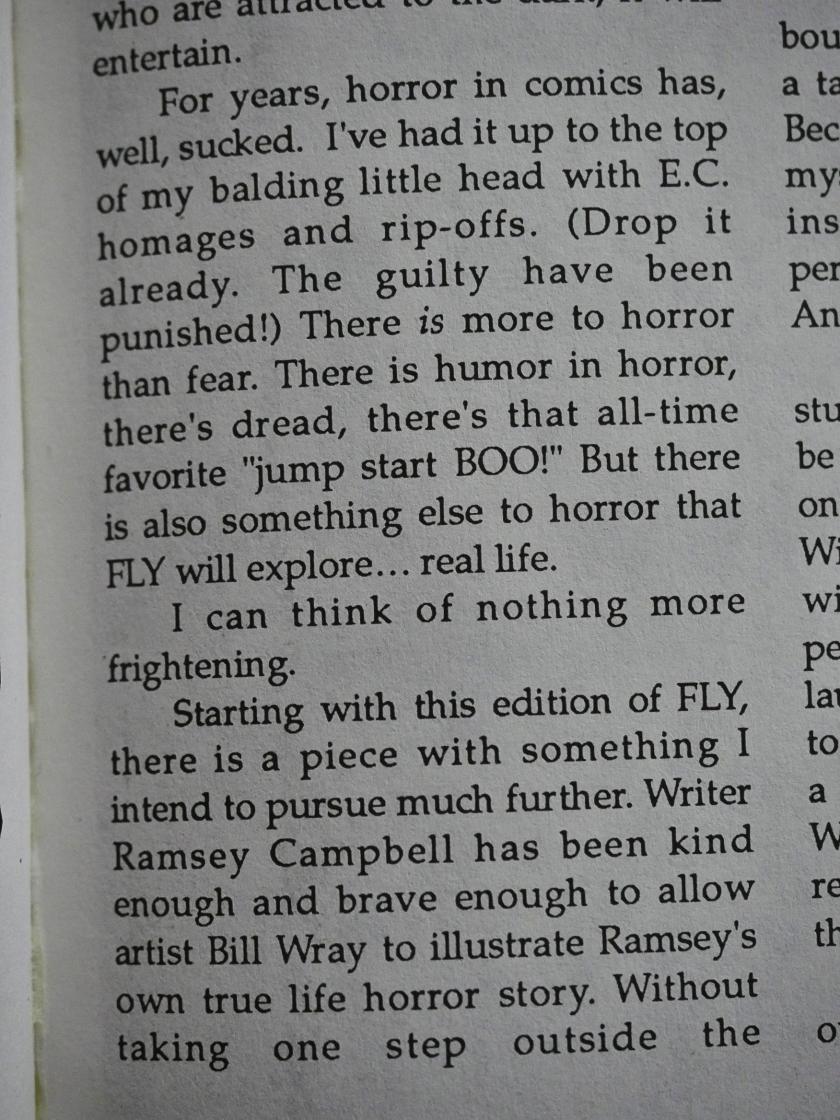 Anyway, the next year, Eclipse took over as co-publishers, and the page count shrank to about half the previous size, and the readability increased a bit. Niles also promises to explore real life more, because that’s where the frights are.

I like these pages by R. K. Sloane and Jeff Gaither. They’ve got a frenetic, moist underground feeling to them. 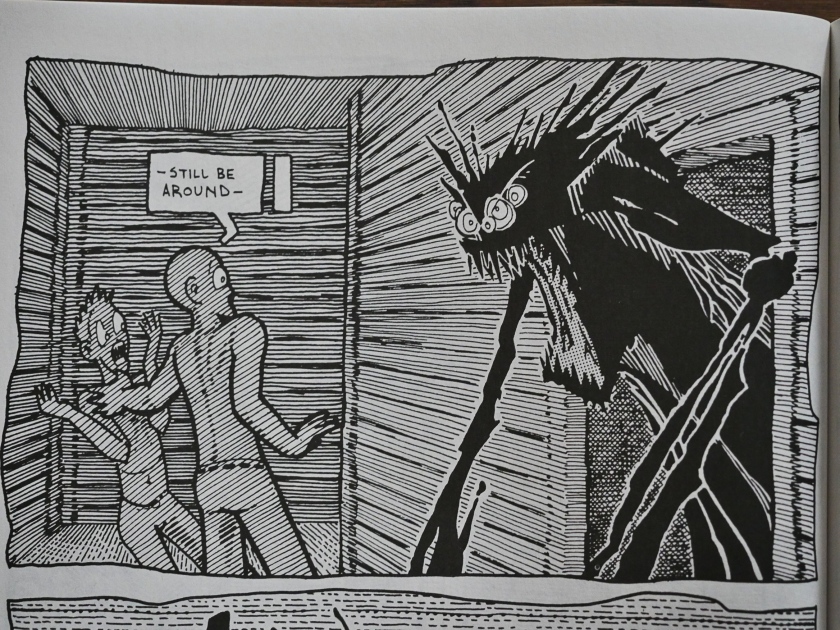 There’s a newly drawn Matt Howarth piece, based on the art style, so I’m guessing that they’re now paying the contributors more. 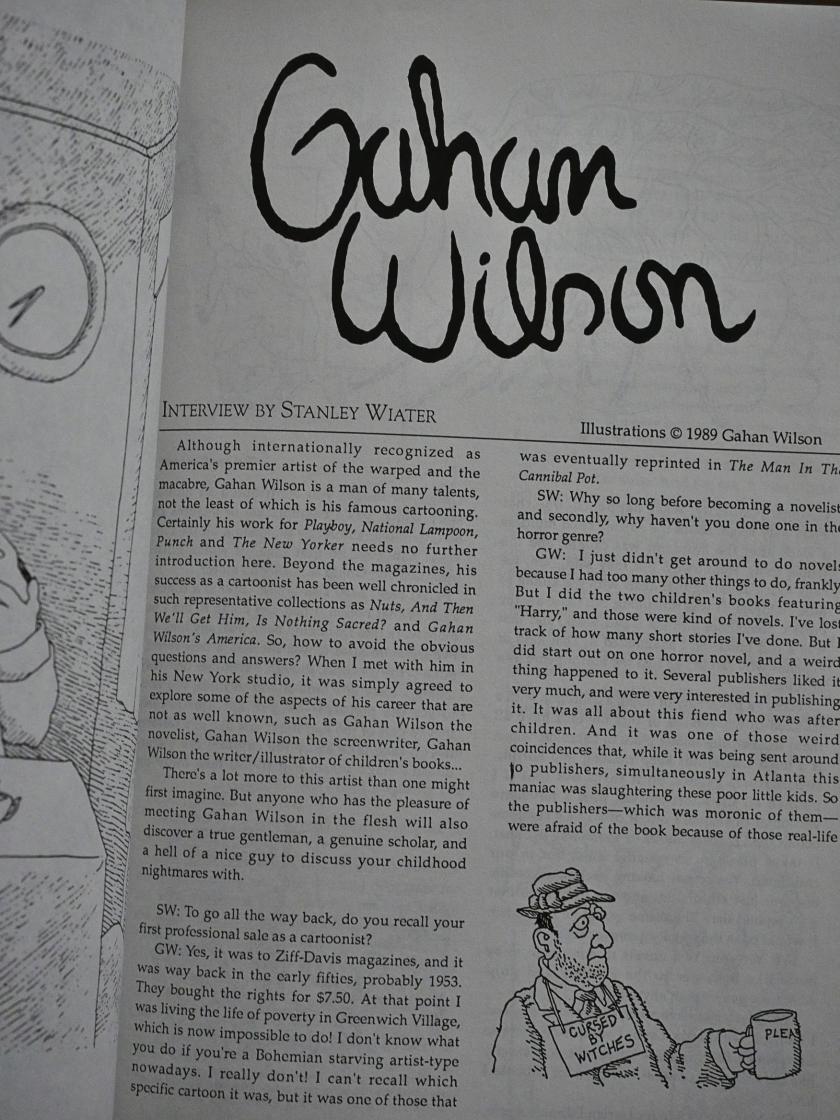 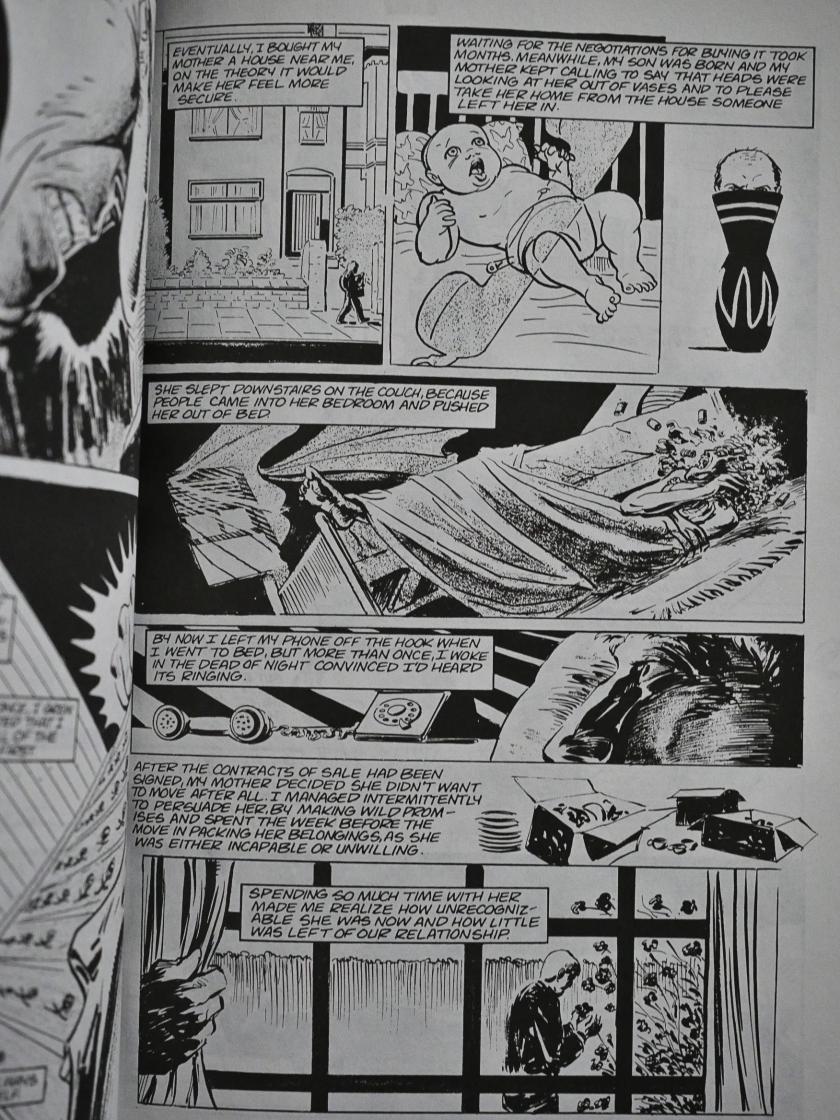 I think this is what Niles was talking about when he was talking about real life horrors. It’s a story written by Ramsey Campbell and adapted by Bill Wray, and while it is, indeed, horrific (it’s about a paranoid and senile mother), Wray’s approach to the artwork here isn’t successful.

Jeff Dickinson does something that starts off in the domestic horror vein and then the vein explodes and spurts blood all over the place.

JK Potter and Tim Caldwell do a fumetti-style story. Was Photoshop a thing in 1989? These pictures look manipulated, but in a nice way…

Eek! Cockroaches! But it ends happily: He torches his house and kills them all. 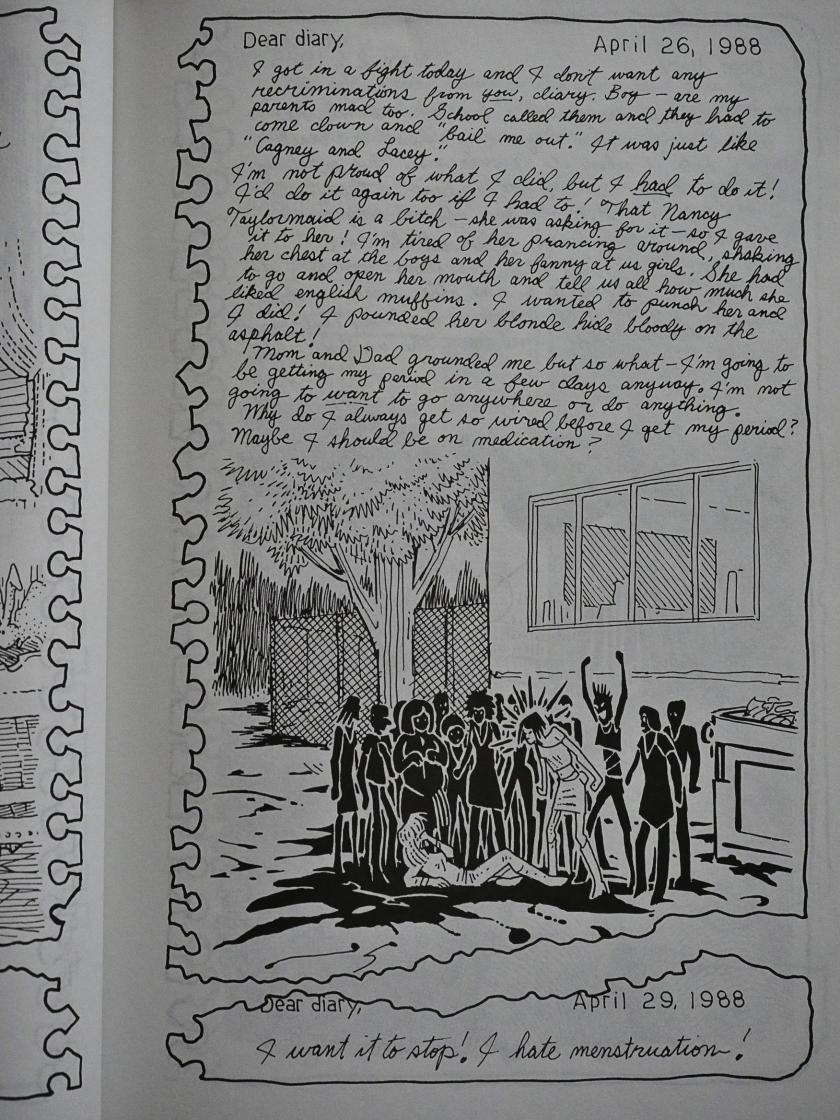 Matt Howarth does a story about menstruation. It’s fun! 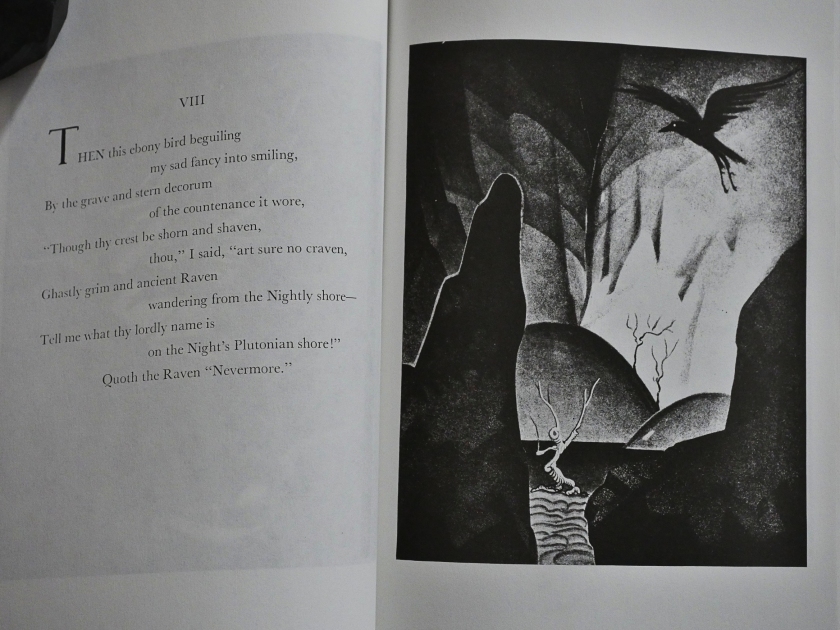 This anthology series is an extreme sausage fest. Only one female creator contributes to this series, and it’s Molly Lyre as this short story drawn by D’Israeli, apparently. The credits are a bit hard to make out. But it’s the best thing in the third issue.

The fourth issue is just 48 pages long, and the first 30 pages are a horror/sci-fi thing from, yes, you guessed it, Matt Howarth.

And it’s both a typical and very untypical Geary story, because he manages to be genuinely unnerving in this story. You have no idea where he’s going with it, and then he seems to pull a twist ending… and then he untwists it! It’s great! The best story from the anthology.

But these manipulated pictures by Jeffrey K. Potter that fill out the remaining pages are also nice.

It’s an odd anthology. Niles originally seemed to go for a vibe similar to Taboo, which was edited by Steven Bissette and John Totleben, but with a more arty sheen. But he didn’t exactly entice his (sometimes) talented contributors to do top-notch work, and there were too many long and not very interesting pieces from newcomers.

Ooops! Here’s from issue 153, all typos from the Journal or the OCR software:

His story concerns Eclipse’s Fly in My Eye Exposed, which was released in June, 1992.

Dickinson was asked to contribute a story to Fly in My Eye Erposed by the book’s editor, Steve Niles, in late 1989. According to Dickinson, Niles offered him $100 a page for a 46-page story called “The Twisted Men” but said that this amount was negotiable; Niles added that the sum would be paid in installments as the story was delivered. (Niles, who was working as a freelance editor for Eclipse at that time, confirmed that he offered Dickinson S4,600 but could not remember if the sum was to be paid in installments. “I don’t doubt it, though,” he said.)

Dickinson agreed and uorked on the story throughout 1990. After he had delivered 42 pages of the 46page story, Dickinson said, he had still not received any payment from Eclipse. Although the story was completed in January, 1991, he refused to deliver the final installment until he had a contract.

Eclipse President Jan Mullaney called Dickinson at this time and offered him $2,800 for the story. After some negotiating, the two agreed on S3,000; Dickinson was to deliver the rest of the story upon signing the contract. Dickinson said he waited five months without seeing the contract.

“They never sent me a contract and yet they kept wondering where the final installment was,” he said. ‘After several irate phone calls to Eclipse,” he said, he finally received a contract on June 3, 1991. Although S31)00 had been agreed to over the phone, the contract listed S2,700 as his payment for the story.

Furthermore, said Dickinson, the contract contained a clause which demanded delivery of the art on June 7 or else Eclipse would deduct another 15% of the payment. “They had given me 3 days to sign and deliver the art at the lower salary or else.” said Dickinson. “And this after I had waited five months to receive the contract!”

In May, however, Dickinson received a call from Niles, who told him that only half the book would be printed, that his story would be cut from the book, and that he would not be paid.

Dickinson demanded a written explanation from Eclipse. Jan Mullaney sent him the following letter, dated 14 May, 1992: “Please consider this an official notification that your story will not be in the publication FLY IN MY EYE EXPOSED.

I apologize for the confusion and delays, but the market has changed considerably over the past year. Steve Niles and other creators took much longer than expected to turn in the book and as a result we could no longer afford to publish the book in the form we originally planned. This was not an easy choice and was made very reluctantly. I apologize again for the delays.”

Up until recently, said Whiting, Eclipse had always paid him regularly. Niles agreed that Eclipse once treated its artists better. “They just got really irresponsible,” he said.

I’ve been unable to find any reviews of the books, but I found this quote from Niles:

I had my own company called Arcane Comics and I did a couple of things. I did a book called. “Fly In My Eye.” People liked it, but it was a disaster business wise. It was 225 pages and I only charged $9.95 for it. I paid everyone page rates. It was a huge disaster for the business. Then we did Clive Barker lithographs and that was the point where I realized I didn’t want to be a businessman. I wanted to create stuff. So, I started packaging stuff for Eclipse.