What’s this then? Another initiative from Eclipse after the (I’m guessing) failed line of FX books?

Nope. Or rather… I don’t think so? Eclipse were in huge financial difficulties by the middle of 1993 (with stories starting to pop up in the trade press about writers and artists not being paid), so one could perhaps suspect that they may have found it convenient to set up a separate company to get some unencumbered cash flowing again. But I can find nothing that points to that being the case, really. Instead it seems like Eclipse Comics were just distributing the Claypool comics, and were otherwise not that involved. (“Distributing” here most likely means “putting the books on the Eclipse solicitation forms the comics shops order from”, while the real distribution happens through Diamond and its competitors.)

So the four Claypool comics I’m covering here (that I didn’t know existed until a couple of weeks ago), are somewhat out of the remit of this blog article series, but I thought it might be of some interest. There’s a pretty big overlap of creators working on these comics and Eclipse, too.

Oh, yeah, we were going to talk about the actual comic book, too, not just about Eclipse Comics.

This is a comic book about Elvira, Mistress of the Dark, and is based on… a TV show? Or something? I’m sorry, I’ve never seen it, but based on what’s in this comic, she was a hostess that shows horror movies on late night cable TV shows in the US in the 80s? And then made snide comments about it when it was time to throw to commercials? So it’s kinda like Mystery Science Theatre 3000, only less so?

But the comic book keeps the number of shower shots (and the equivalent) to bare minimum (so to speak), and concentrates on telling one bad joke after another, and getting hi-jinx rolling and then reeling them in again.

Editor Richard Howell (I’m assuming he writes these pages) does an introduction of Elvira (and the line of Claypool comics) that reads less like a creative statement and more like a business plan.

Perhaps the oddest decision is to concentrate on shorter stories: Each issue has a 15 page lead story and an 8 page backup feature. Since comics creators haven’t really been into shorter stories since, well, the 50s, and often struggle when trying to squeeze an entire story into a short space, that sounds like something that’ll lead to a lot of “to be continue” endings… 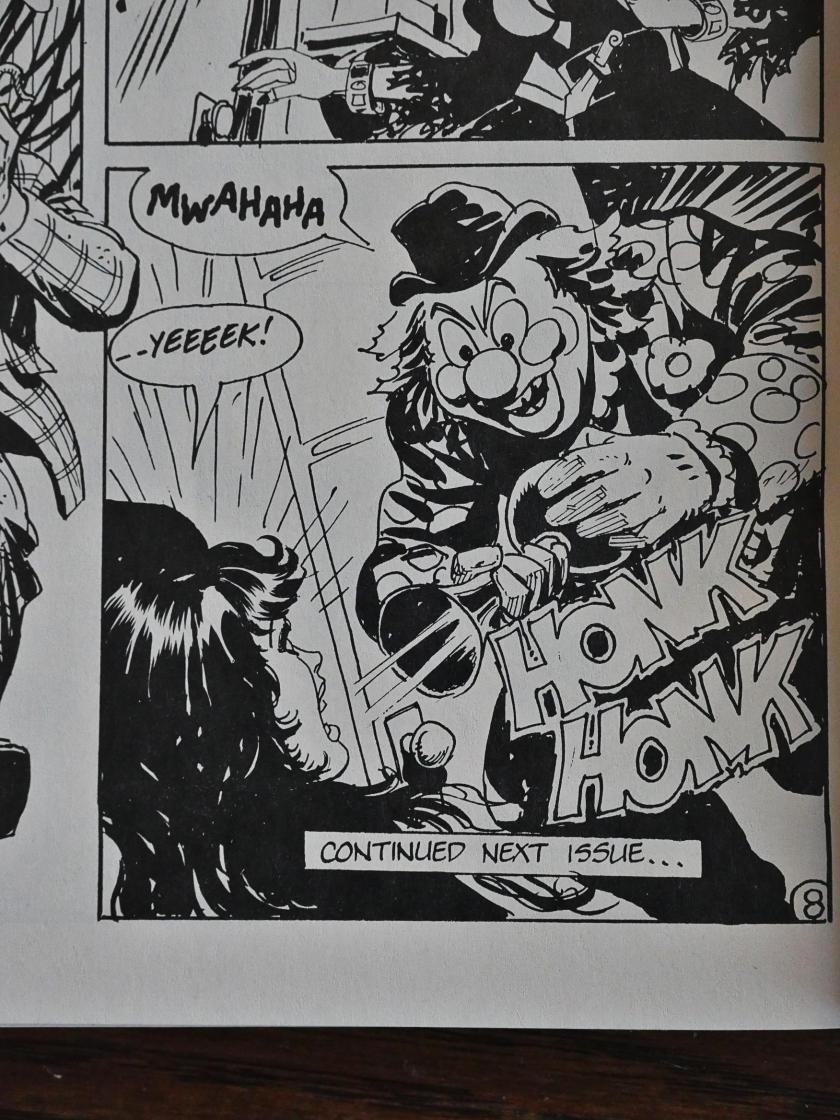 And it does. Especially with the backup features, like this one by Jo Duffy and Dan Spiegle.

There’s a bewildering array of creators on these eleven issues. Neither artists nor writers make a lot of repeat appearances, but Duffy/Spiegle does a six part serial (that’s fun) and Kurt Busiek writes some really amusing stories, too.

Over half the ads in these books are for Eclipse books, like this never-published issue of True Crime Special. Perhaps that’s how Claypool paid Eclipse for the distribution?

I had no hopes whatsoever that I was going to enjoy reading these comics. It’s a licensed property, the books look kinda cheap, and… well… You know. But I was utterly wrong.

While there’s a lot of different people working on these stories, editor Howell manages to keep it pretty cohesive, while still having variety. These stories are just so… amiable. There’s no pretension. There’s no satire. It’s just a group of people having lighthearted fun and telling odd, slightly nonsensical stories.

I spent an evening reading these comics, and that was a very pleasant evening. There’s virtually nothing annoying about the experience. It’s… nice! There’s the word. Nice! But in a good way! 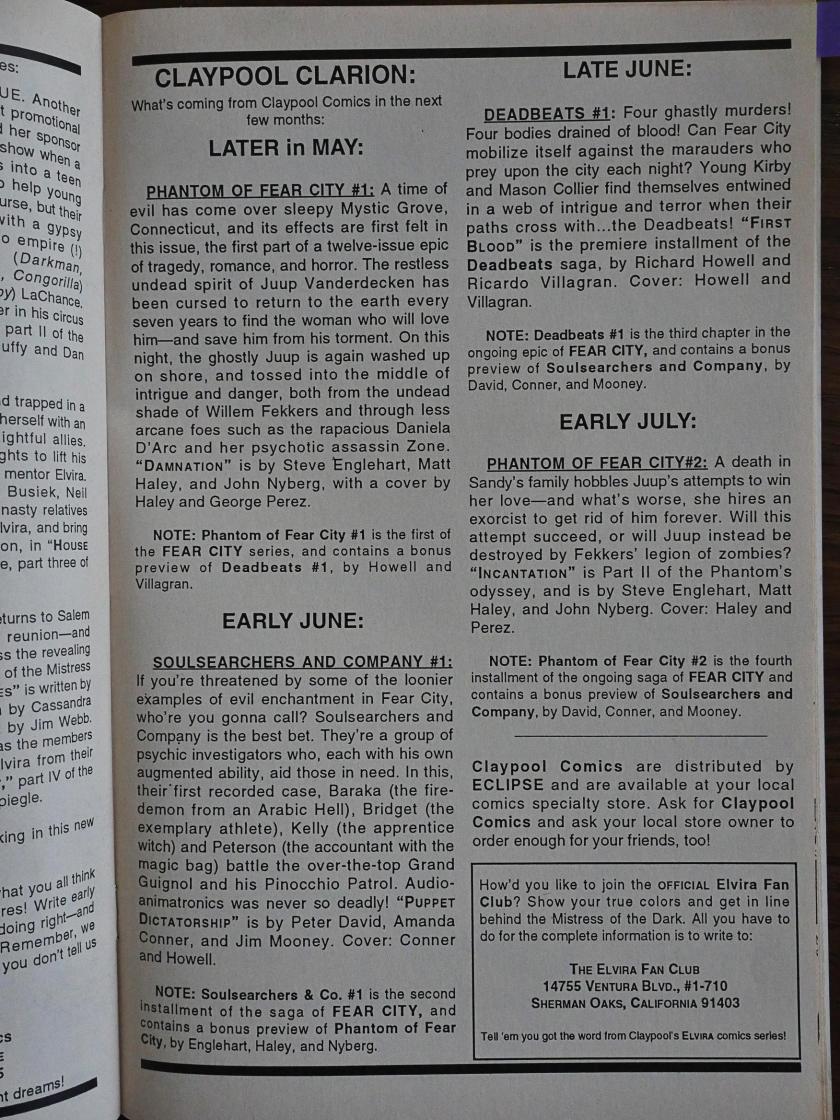 I’ll cover the other three Claypool comics over the next few days, but apparently they form a shared universe of some kind? With a new comic published every two weeks? I hope I don’t have to read them in that order..

Elvira isn’t part of that scheme, though.

So many Eclipse trading cards!

While the comics mostly use square layouts, some artists wig out a bit. That’s… Neil Vokes and Louis Lachance (?), with writing by Kurt Busiek. 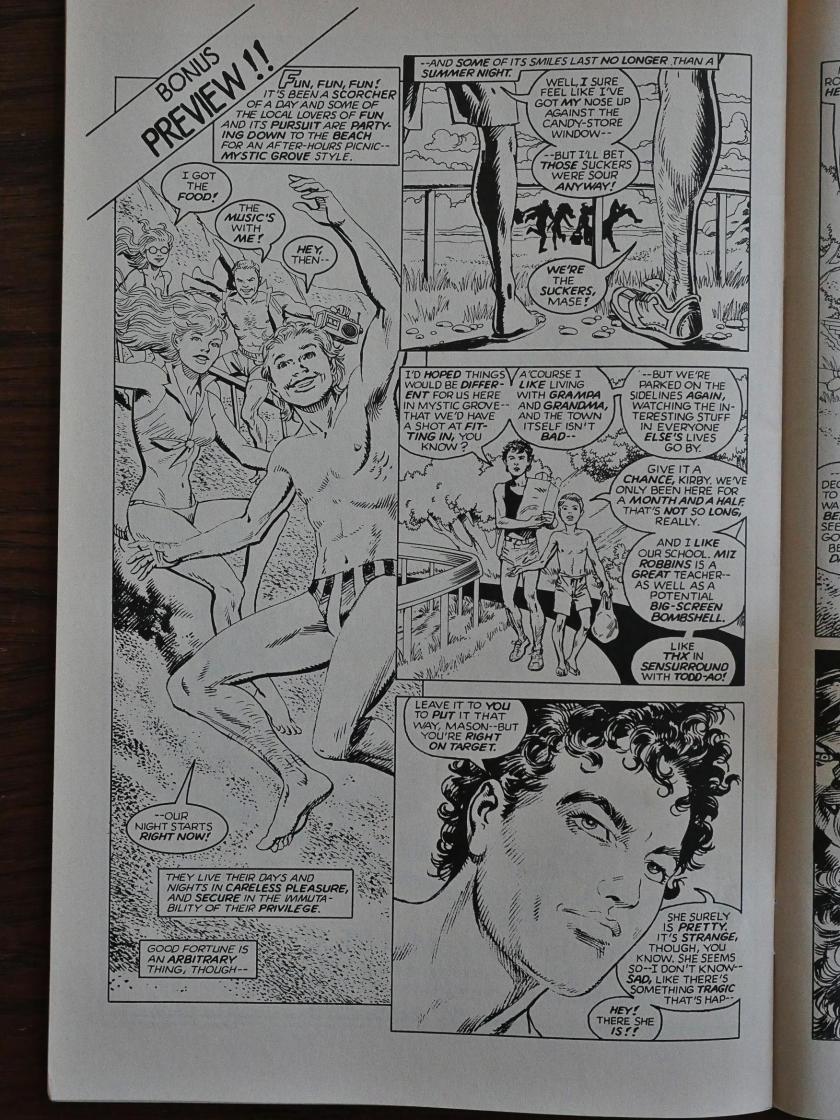 And we get previews from all the other Claypool comics.

Elvira herself isn’t directly involved with creating the book, but she contributed parts of the storyline to one.

Hm… cat ⊕ yronwode, the editor-in-chief of Eclipse, steps in as the production supervisor after a few issues, and Letitia Glozer (her sister and an editor at Eclipse) also gets involved. I’m not sure what that means, exactly, but perhaps Eclipse were taking over more of the practical work of putting the book together in addition to distributing it?

The artwork is a bit hit and miss. Jim Mooney is a veteran, but his Elvira faces just look bizarre.

Colleen Doran was originally scheduled to do the artwork, so perhaps it was a rush job.

We get one short story (written by Buzz Lovko) which is… there.

I can’t make up my mind whether Dave Cockrum and Ricardo Villagran (who are both pretty good artists on their own) are a bizarre mismatch, or whether it makes sense. I kinda varies from panel to panel…

Kurt Busiek and David Wenzel had done a commercially successful adaptation of The Hobbit for Eclipse, and they were in the process of doing another three-part series? Eclipse were taking orders for it, anyway. Googling for a couple minutes reveals that it was published by Image Comics four years later, so I guess the people who bought it from Eclipse went unsatisfied.

The letters pages are mostly enthusiastic, but there’s some erudite criticism, too.

Hm… Desperado-Eastern? Ah, that’s Richard Howell’s company that published Portia Prinz of the Glamazons in the 70s. *phew* I thought I was going to have to get buying even more comics for this blog series… 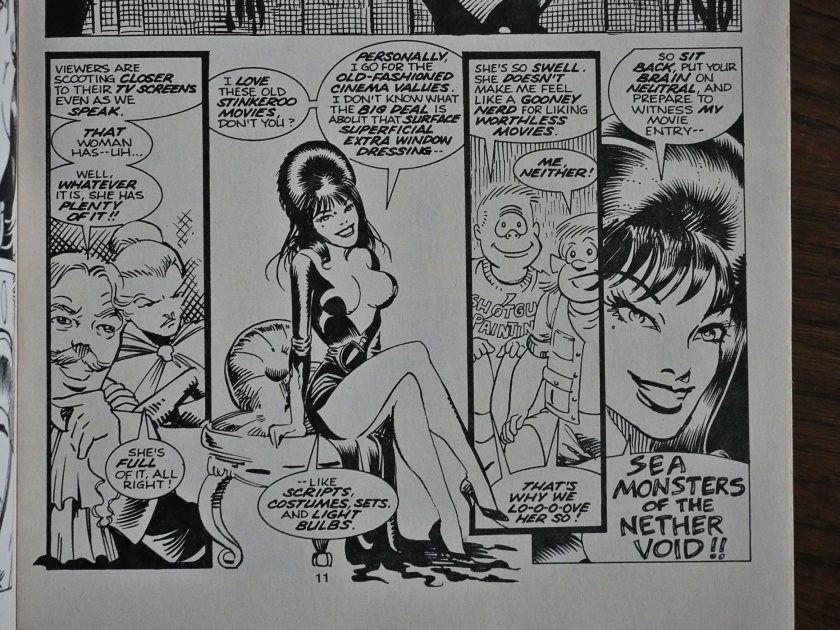 Everything is kinda perfect until the tenth issue, when Howell takes over as solo writer. He’d previously co-written several stories (mostly with Busiek), but his solo stuff is… less funny, wordier and oddly preachy. He devotes one story to basically telling us that old, bad movies are the best.

And another to telling us that daytime prime soaps are the best thing ever!

It’s bizarre. And not funny.

I have to assume that it snapped back to being amusing again, because it lasted for 166 (!) issues before Claypool stopped publishing.

And then it’s over. The last issue distributed by Eclipse was published in March 1994, which is while the lawsuit against Eclipse was running, but still hadn’t been settled. They’d get a verdict of $120K against them for withholding money from Toren Smith (apparently), but that was months off. So I don’t know what Claypool’s reasoning was… Hm… I should buy the next issue just to see whether there’s anything of interest there. Yup. I’ll do so and update this blog post.

But here’s the news item from The Comics Journal #167:

Claypool Comics is marking its second year of publication by announcing a change in its distribution system. Previously solicited and distributed by Eclipse Comics, beginning in May, Claypool will handle their own distribution system. Editor Richard Howell told the Journal, “Eclipse is undergoing a reorganization (see “Newswatch” TCI #165 and 1661, and we felt that this was the optimal time to step out on our own.” Howell said that Claypool’s four titles will continue on their present schedules, with Elvira, Mistress of the Dark #13 and Deadbeats #7 representing the first Claypool titles to be distributed through its own solicitation system.

In #12, they’ve forgotten to remove the “distributed by Eclipse Comics” think from the inside front cover, and cat ⊕ yronwode is still listed as the production supervisor. I don’t know whether they forgot that, too?

The comics themselves are don’t seem very affected by the changeover, either. There’s still an abundance of hoary, bad jokes and odd artwork, here by editor/writer Howell and artist Louis Lachance.

But if you pile up enough of those bad jokes, the results are still pretty amusing.

Howell just can’t help himself with the over-writing, though. Many of the pages he writes are more dialogue than artwork, which gets a bit tiresome after a while.

On the letters pages, Howell notes that that back issue phone number was down for a week, but is now up again after they moved the warehouse. The phone number is the phone number to Eclipse, though, so, uhm… I’m a bit confused by the time line here, too. Eclipse didn’t go bankrupt until eight months after this issue was published, but they’d already divested themselves of their back issue business? And ported the phone number over to the people they’d sold that to?

Howell tries to clear up some confusing by “reminding them, once again, that Claypool never was an imprint or offshoot of Eclipse; that they were not our “parent company,” and that the two companies had different management, editorial goals, and funding”. So I guess I wasn’t the only person slightly suspicious about the set up. 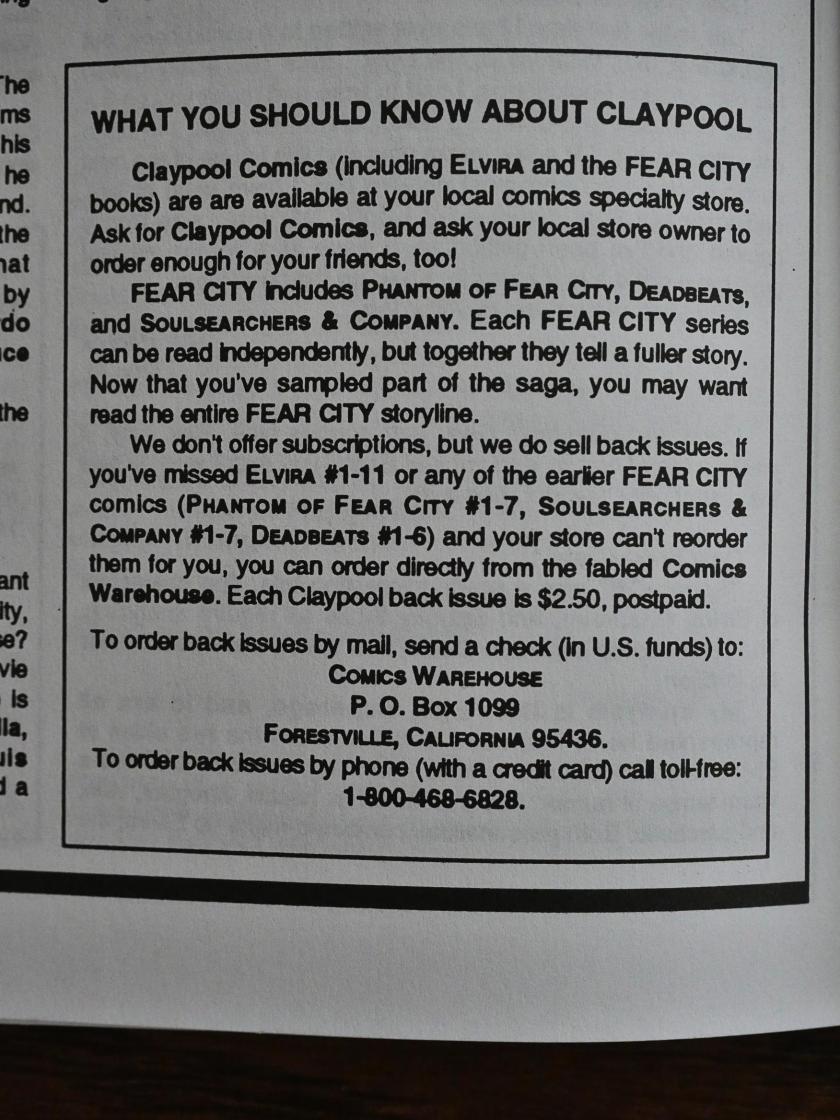 Heh. The post office box of the “new” back issue sales department is the same as Eclipse’s post office box. Here’s how it looked in the previous issue: 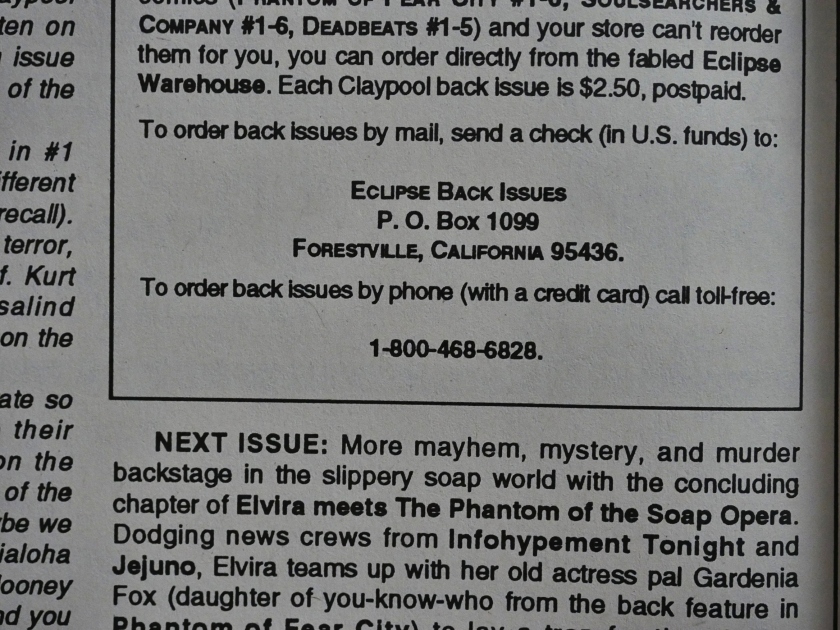 So Eclipse spun off its back issue sales into a separate company called “Comics Warehouse”? Presumably to protect it from the looming bankruptcy, and that looks like a successful strategy, since cat ⊕ yronwode continued to sell comics under that name until early this millennium. 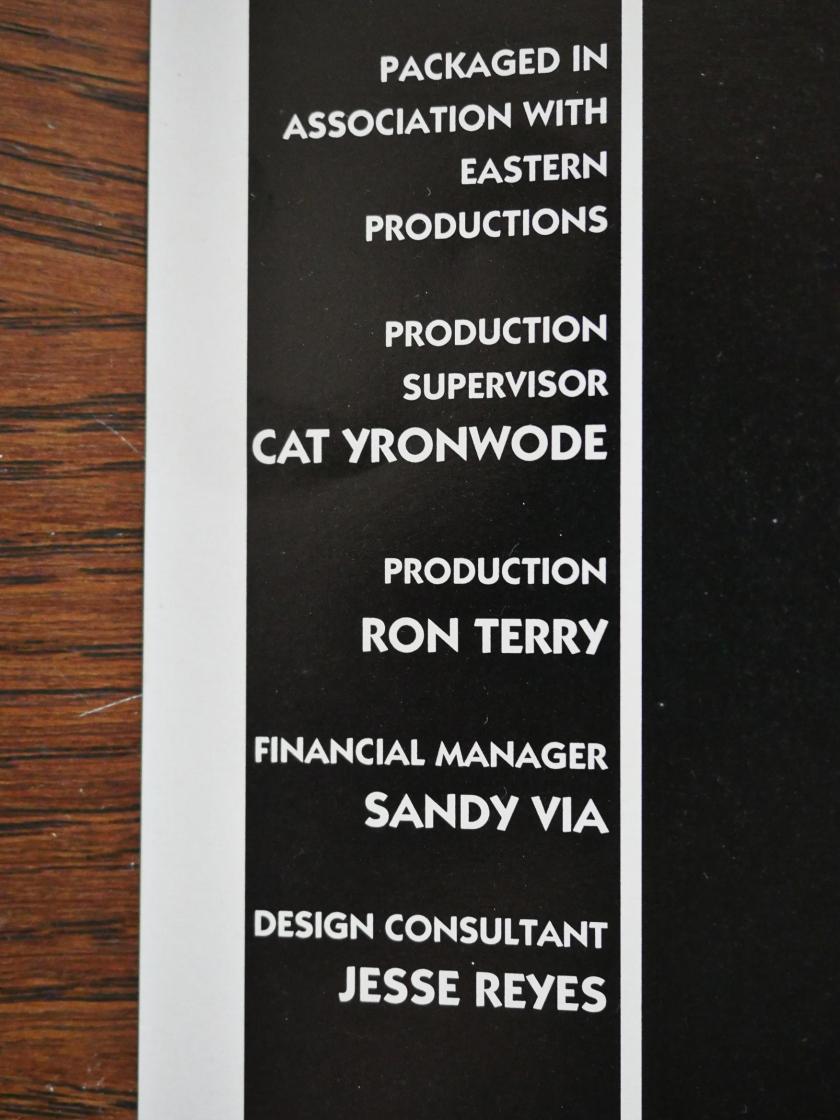 Anyway, in #13, they’ve removed the “distributed by Eclipse” thing from the inside front cover, but yronwode is still the production supervisor.

And things otherwise continue as before, with Kurt Busiek writing a pretty funny take on Ren & Stimpy (as Renfield & Stimpfield, Dracula’s minions) with artwork by Neil Vokes.

OK, now I’m done with Elvira for real. I mean, I could continue to read these comics indefinitely, because they are fun, enjoyable and easy on the brain, but ain’t nobody got time for that.