This is the second of the three initial biweekly translations of Japanese comics Eclipse (in cooperation with Viz) started in May 1987. Whereas Area 88 is a modern jet fightin’ slash soap opera, and Mai, The Psychic Girl is science fiction slash romance, here we have feudal Japanese ninja comics. I guess they wanted to try out as different genres as possible, but stay mainly with comics directed towards children or teenagers. 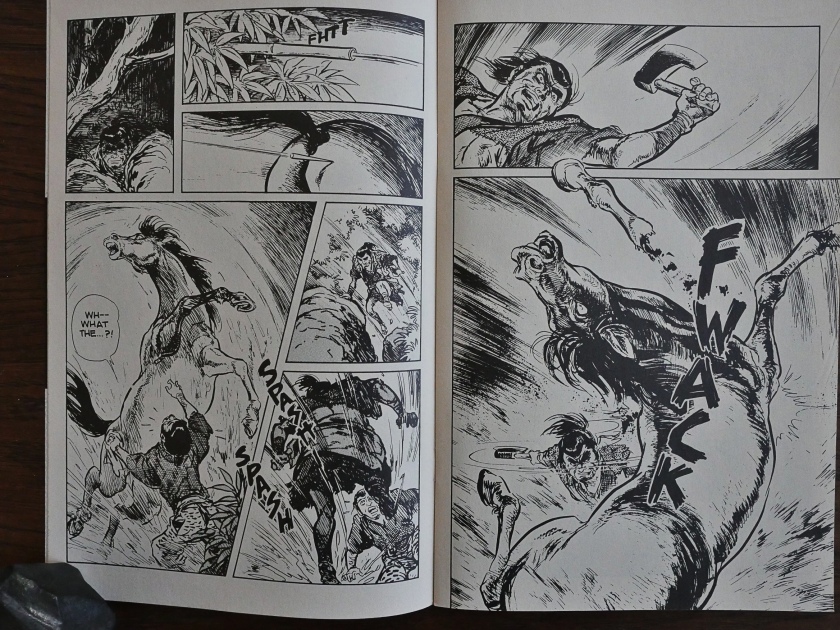 Kamui has a more complicated history than most commercially successful Japanese comics. The first series ran in Garo, the late-60s left-wing underground comics magazine. Kamui was the most popular feature there, but it didn’t make much impression on the general public. The series Eclipse is reprinting in Kamui Den, which is the followup series that Sanpei Shirato created for a mainstream weekly marketed towards teenage boys, and was a major success in Japan, and was a trendsetter in upping “mature” themes in these comics (i.e., violence, nude women and “crude” jokes).

These aren’t episodic comics: The first sixteen issues basically tell one continuous story, and the remaining twenty issues tell another one. Each Eclipse issue has 32 story pages, so it’s pretty chock-full of comics.

The first serial felt a bit choppy in storytelling to me. Basically Our Hero is saved by a fisherman, and is so cold that the only way to thaw him up is to make him lie next to the hearth without a blanket, but covered in the fisherman’s naked wife and oldest daughter. That makes sense, right? 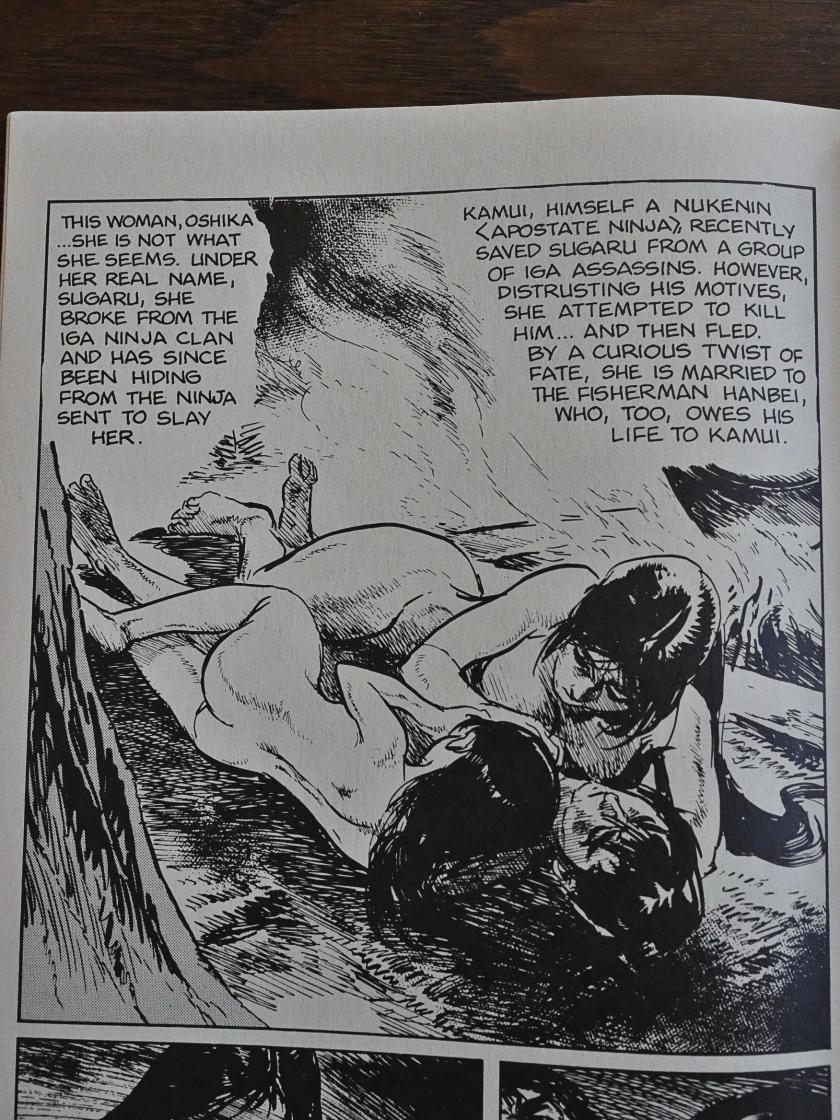 And then we get this exposition bomb dropped on us: The fisherman’s wife is an ex-ninja that Our Hero knows well, and the wife thinks that he’s been sent to kill her, and hilarity ensues. I mean, lots of flying around, ninja style, and lots of fighting.

And, basically, that’s Sanpei Shirato way to plotting. It’s accidents all the way down. If you can make accidents meaningful, pointing towards a mysterious greater conspiracy, perhaps, this storytelling method can be effective, but here’s it’s basically just laziness. All the characters we meet will turn out to have accidentally killed the brother or father of all the other characters we meet. 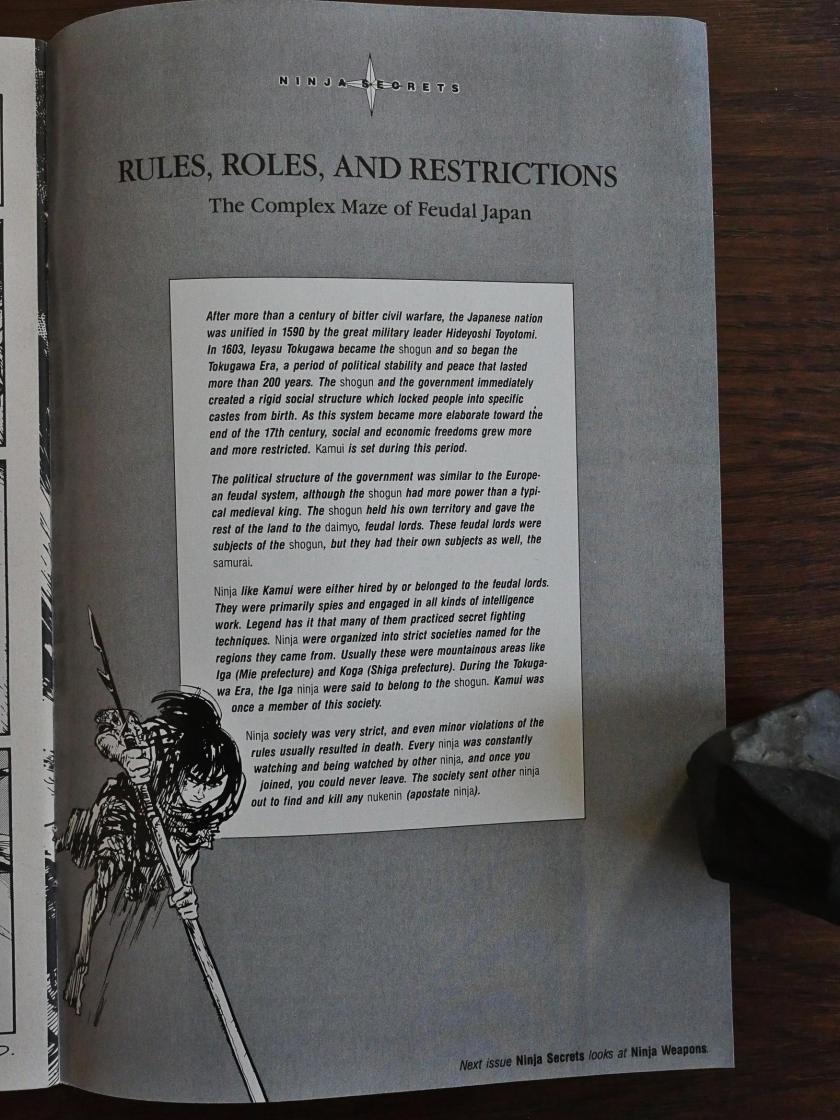 In over half the issues, we an inside back cover that explains a bit of Japanese feudal society, mostly in relation to something we’ve just seen in the preceding issue. These are mostly written by the Japanese translator, and are, indeed, very informative. The translator seems to have a passion for his subject.

It’s not all accidents and fighting. We get a lot of propulsive scenes of fishing, and Sanpei Shirato and his studio sure knows how to draw wildlife. 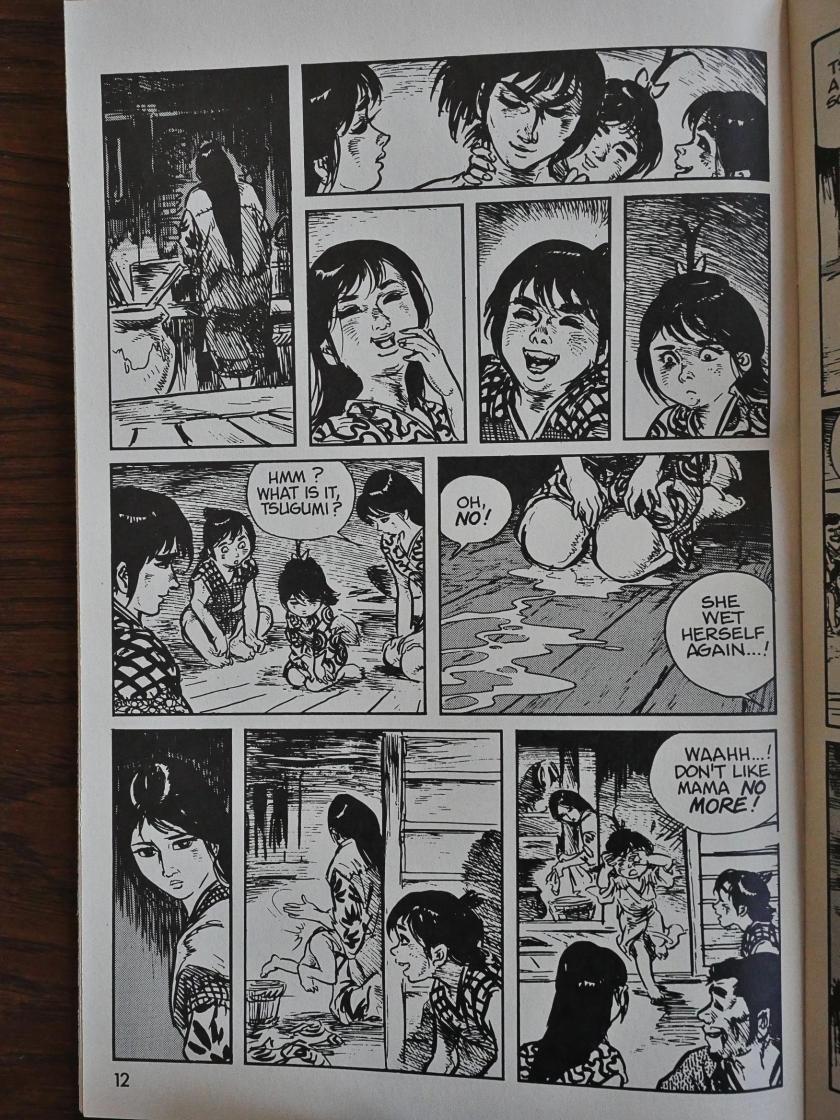 And there are tender scenes, and scenes of slightly embarrassing humour. I mean, embarrassing for the characters. 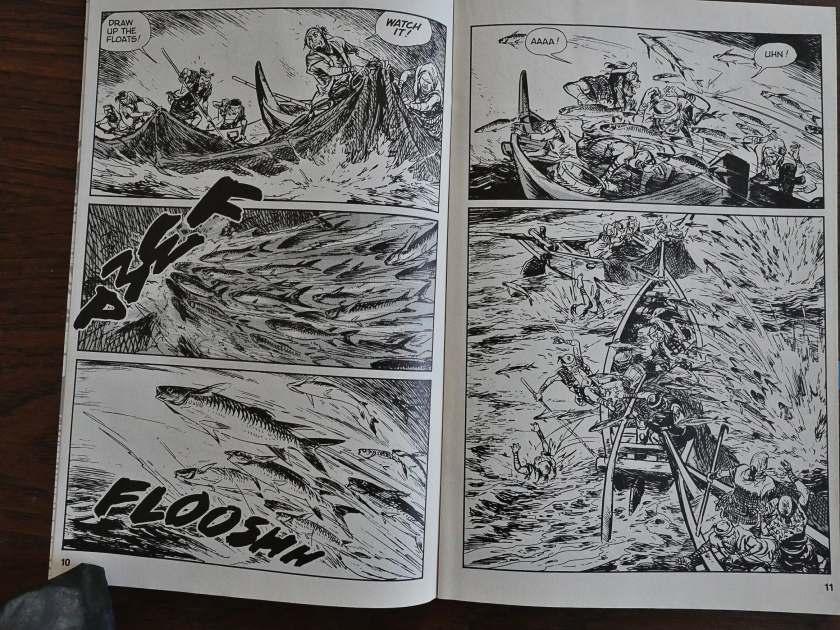 (Yes, fishing in Japan is draaamaaa!)

And apparently, when fishing for sharks, you use live puppies that you dangle by their necks. Yes, if you don’t like seeing dogs killed, this is not the comic book for you. There’s at least one dispatched every other issue.

A reader seems to think that the translations “read like bad Saturday morning programs”. They look fine to me. I’m not quite sure what they’re trying to say with that “P.S.”… Er… Adults don’t care about nudity, but kids do, so it should be left in? Me confused!

Anyway, we were talking about violence. This is an extremely violent book; probably the most violent book published in the US direct market to that date. Body parts go flying every which way, heads are sliced in two, and bowels spill. This scene, though, with the really violent bits that follow on the next pages (I’m not including them because they’re ewww), is on another level. That’s Our Hero taking revenge on a guy who’s… bad. But it’s a rather extreme method. 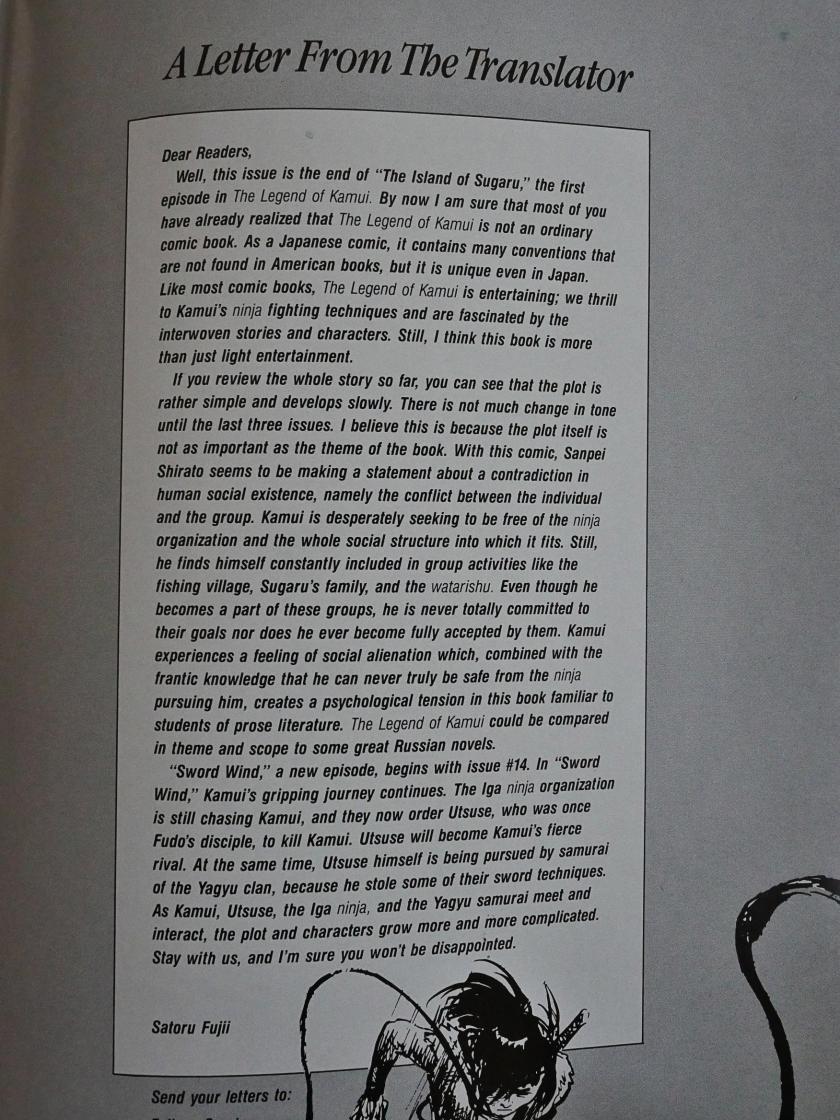 After the first story is wrapped up, the translator explains that the next sequence is going to be even longer.

And we get a survey where we can tell Viz what kind of comics we want in the future. Market research, man.

The first issue of the new storyline is, indeed, quite confusing. We’re introduced to a number of new characters who then proceed to hack each other to death, and the ones we don’t expect to survive then goes on to be major protagonists. I had to read some of the scenes twice just to keep the names straight, and everybody looking very similar didn’t help much. 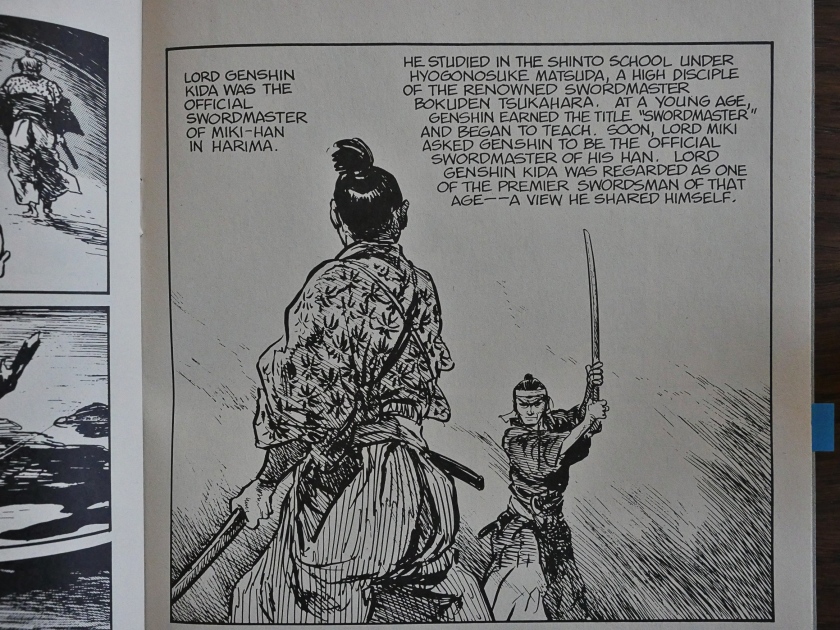 Sanpei Shirato helps the poor reader a bit by dropping in these fact boxes every once in a while when things get too confusing.

Aha! That’s why the first sequence seemed a bit choppy: They dropped bits to give us “only the very best stories”. Well, that’s not unusual when doing translations, but perhaps that wasn’t quite the right approach here. Either they chopped too much or too little.

A reader writes in with “one of the most appealing things about Kamui is the way the violence is played down”. Now, that may have been written before the “going shark fishing with a dismembered, living man” issue was published, but… What series was this person reading?

There’s a lot more covers to the American series than in Japan, so the number of colour paintings of Kamui available ran out at issue 21. At the end there, they weren’t… the best. 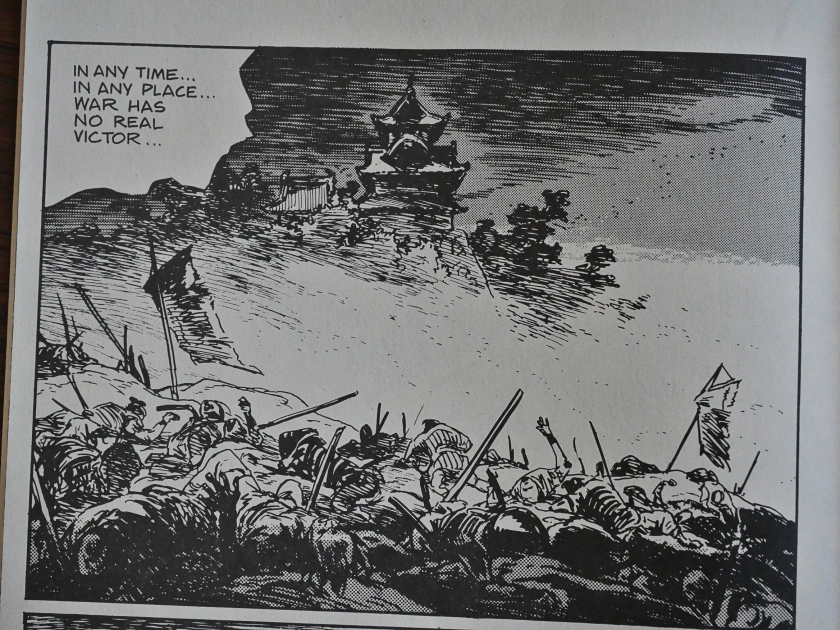 The obligatory “was is hell” panel after 40 pages of kick-ass exhilarating ninja fighting. That’s how you know it’s a mature comic.

So they ran out of paintings to use, so they made new ones based on the splash pages. Here’s an example: 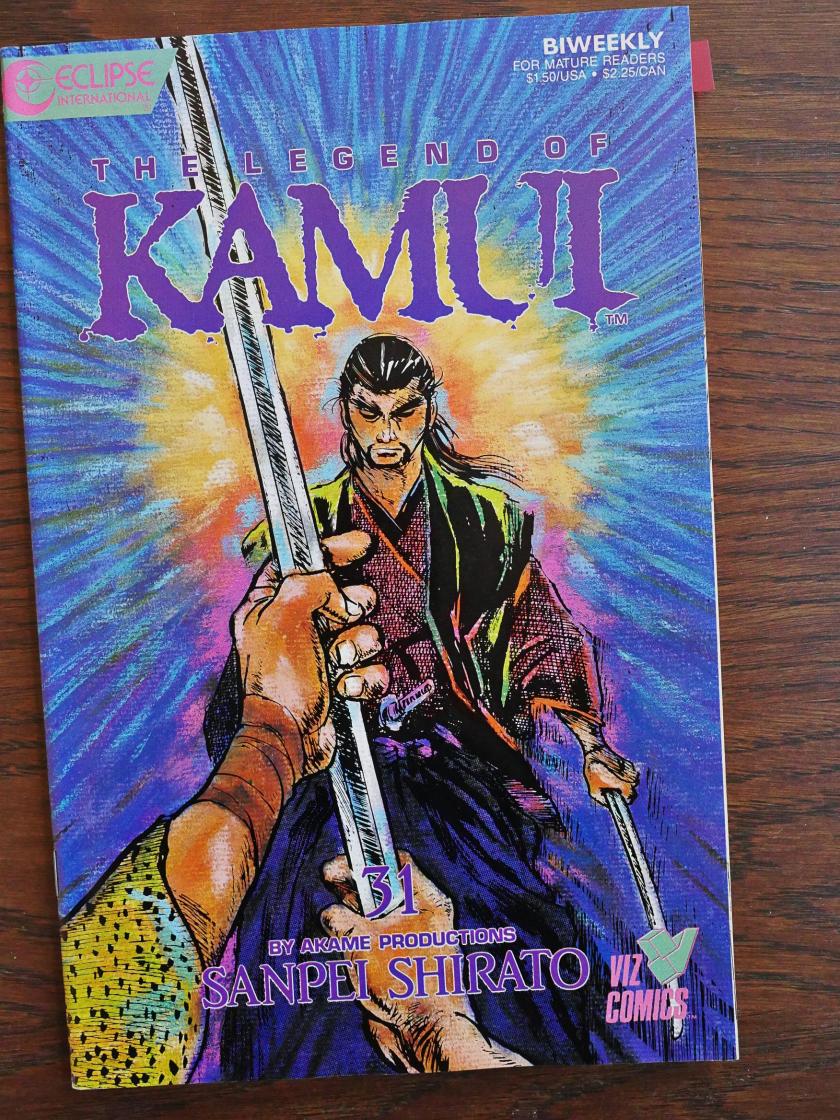 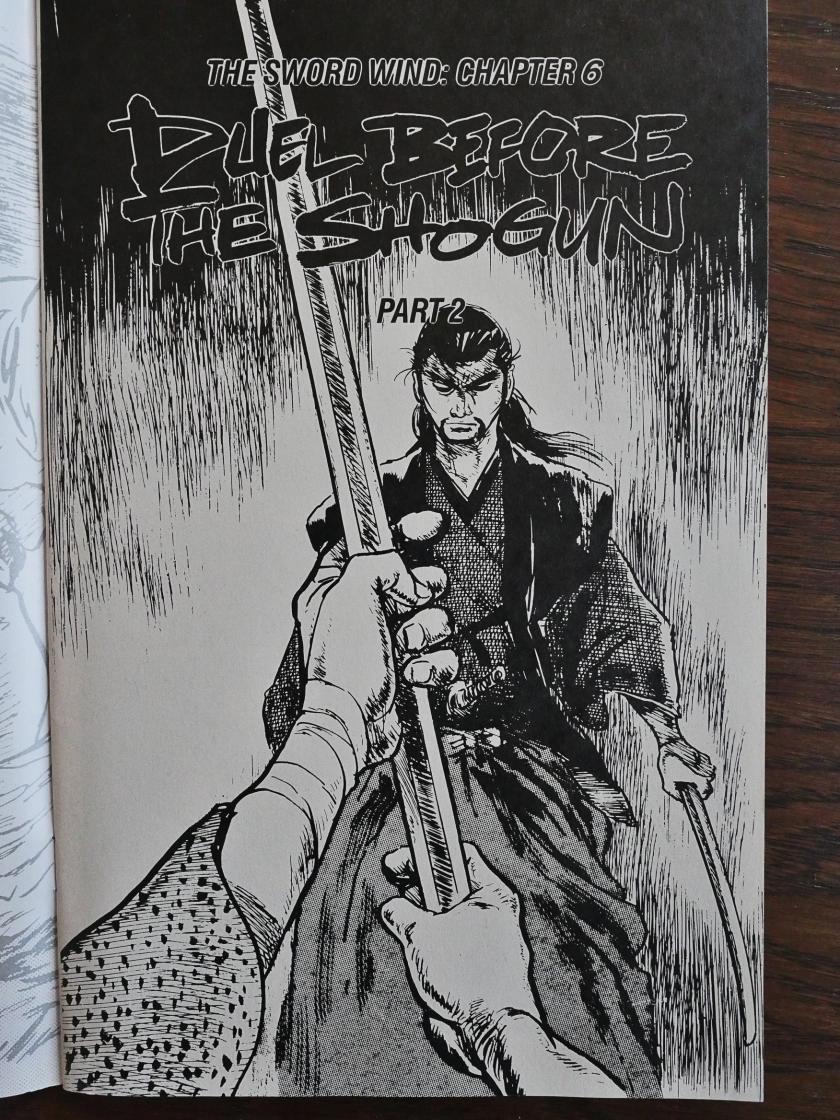 And that’s the original, which looks really cool. The vertical lines makes all the sense in the world, while the radiant colours of the cover don’t.

In short: The colourised covers from issue 22 on out aren’t much to write home about.

The interiors are as wonderful as ever. I especially like the many scenes of cruelty in nature, which is, of course, a metaphor for etc etc. 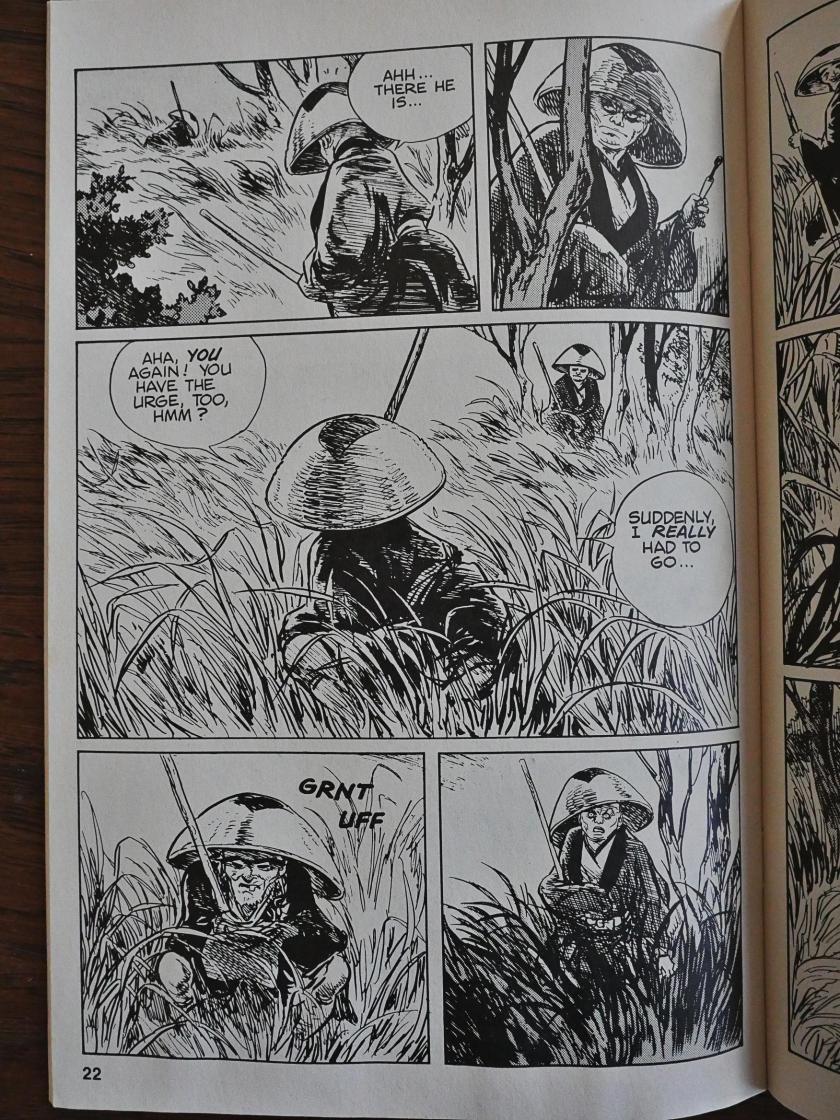 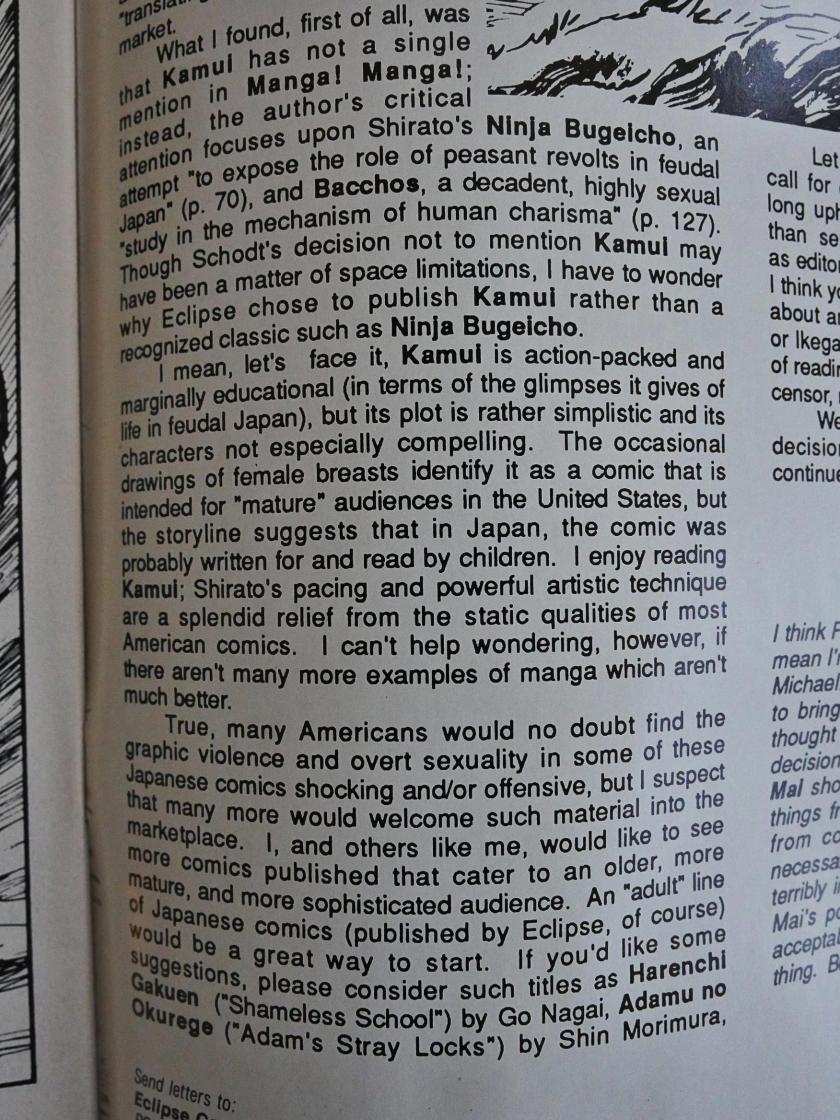 A reader well-versed in Japanese comics writes in to ask about the curious choice of Kamui to translate when there are so many more significant series to choose from. I agree that the plot is simplistic. Well, the number of characters and their mostly hidden motivations makes it for a sometimes obscure reading experience, but in a good way. Confusion is a powerful storytelling tool, making things seem more significant than they may in reality be. I think you can pretty much sum up the “plot” of the second serial in a line or two, but figuring it out is most of the fun. And as for uncompelling characters I disagree completely.

Editor Fred Burke explains that the Japanese partner Shogakukan decided what comics Eclipse would publish. At least that’s how I interpret what he wrote there. I may be reading between the pixels. 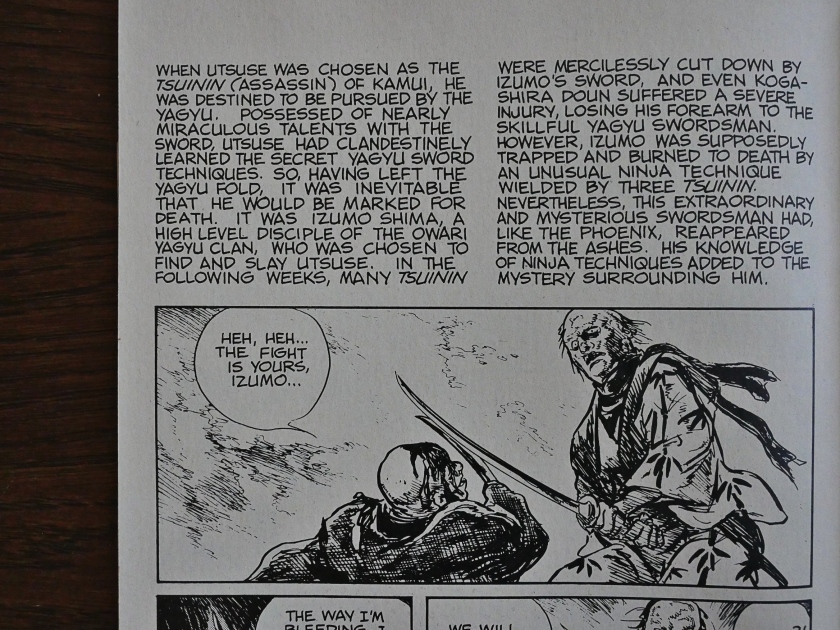 Stuff like the panel above makes me wonder whether it was Eclipse who decided to drop in a sudden explanation of a long-thought-dead character (at least 500 pages ago) was or whether Sanpei Shirato did that in his original version. In any case, I thank them, because I was all “wha?” even though I’d read about him just a couple of hours before.

A reader writes in to compliment Sanpei Shirato on the uniqueness of his storytelling techniques; i.e., having people meet by random.

And speaking of which… Yes, another random meeting without which the plot wouldn’t have any resolution. 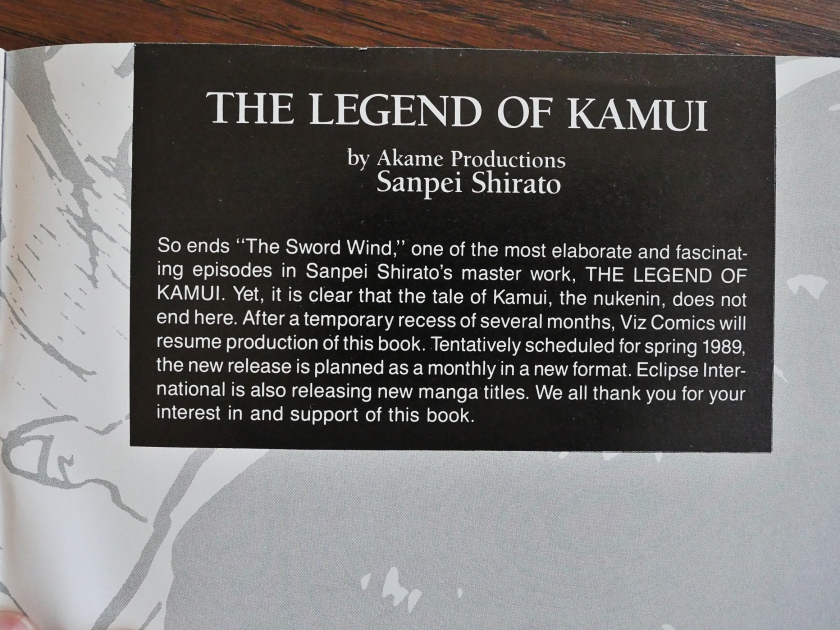 And then it’s over. Viz parted with Eclipse and took all their marbles with them, but they did not continue publishing Kamui. They took another stab at it ten years later and published the first storyline in two paperbacks, but then abandoned the project. The rest of the Kamui stories have never been published in English.

So perhaps that reader that thought it weird that Kamui was translated in the first place had a point. I seems like an anomaly amongst the Japanese-martial-arts comics I’ve read.

I mean, it’s good, non-formulaic, non-repetitive and difficult to predict where it’s going, so it’s nothing like Lone Wolf and Cub, for instance.

I was unable to find any critical response to this series whatsoever, but here’s Goodreads:

Very confusing plot also I am reading only part of the series as only few volumes were translated to English, these volumes only cover two major arc spanning 37 chapters.

The art is ancient as the manga was originally published in 1960’s. I did enjoy them in the beginning with the heavy use of ink and natural detail but as the manga progressed it was the same old thing repeated panel after panel, unbelievable muddle fights which look more like blur than anything else.

Well, I had a nice afternoon, anyway.