Oh, it’s a parody book? “Stormlord”? “Manstar”? That hairy troll in the back of the truck?

We’re introduced to about three gazillion heroes and villains, and they all bicker, and sometimes they’re kinda funny, but it doesn’t really read like a parody, so I think they’re just going for a classic slightly humorous super-hero team dynamic.

The plot is rather incomprehensible. We’re not really introduced to anybody of these people, and their motivations seem totally whack.

OH FUCK! It’s another comic based on a fucking role playing game! That explains the incoherency of it all.

It doesn’t really explain all the weird choices the artist makes. Why is this three panels? Must the “ssss”-es be kept in separate panels? Did time pass? Did the artist just do something random? My guess would be the latter, because it’s really hard to make heads or tails of this book on a panel-by-panel basis. It doesn’t read well.

It’s a role playing comic, so you get the all-important stats on the characters. 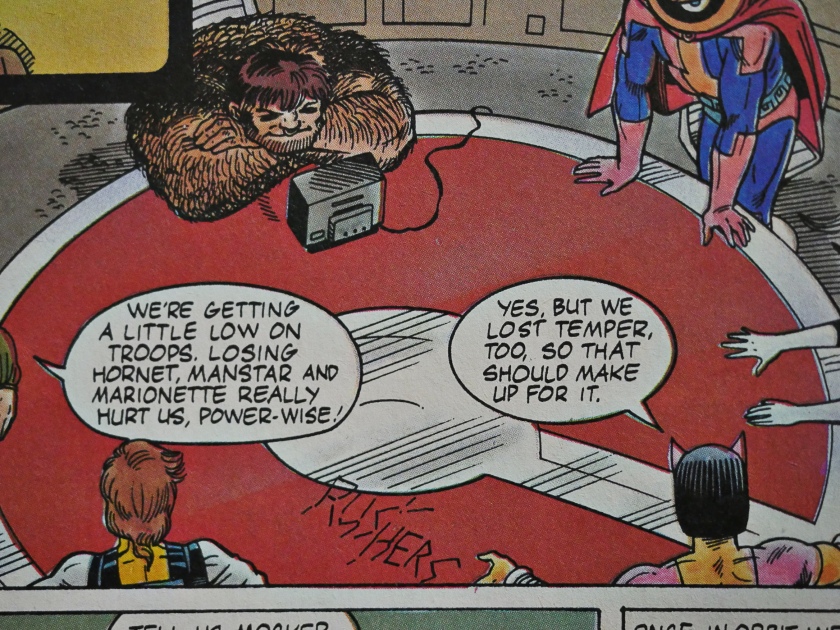 This gag made me kinda smirk. Remember up there the super-hero was talking about how gauche it was with a “C”-shaped table just because their group is called “The Crusaders”? The villains have taken it over and scribbled their own name over it (“Crushers”). That’s plotting!

In the history of perspective drawing, that’s… something.

But I have to say that it got better over the four issues. The first couple of issues were muddled messes, but the fourth issue had several scenes that worked, were kinda exciting and read well.

So… It’s a better book than The Champions, so there’s that going for it.

But I’m obviously not the target demographic for this book, so let’s see whether anybody has reviewed it… Yes! I found a gamer:

Lets talk about the art first. I have to admit that Jeff Dee fans will be a bit disappointed. While Jeff Dees style is evident, his works are mostly ruined by bad inking (although it does improve with each issue). Also some figures are a bit disproportioned at times, and some of the movement looks awkward. I was really surprised to see how fast it looked like Dee ripped out the pictures. Not near the quality of his illustration work.

The script is really a mixed bag. At times they do some really brilliant things (the opening page, where Marionette is controlling all the prison cops minds, and has them “fire” the warden, for instance) at others they use some terrible cliches, at others they just say stupid things. There are times when Jack and Jeff really can’t decide what they want to do, sometimes being deadly serious, and others slapstick funny.

So there you go.