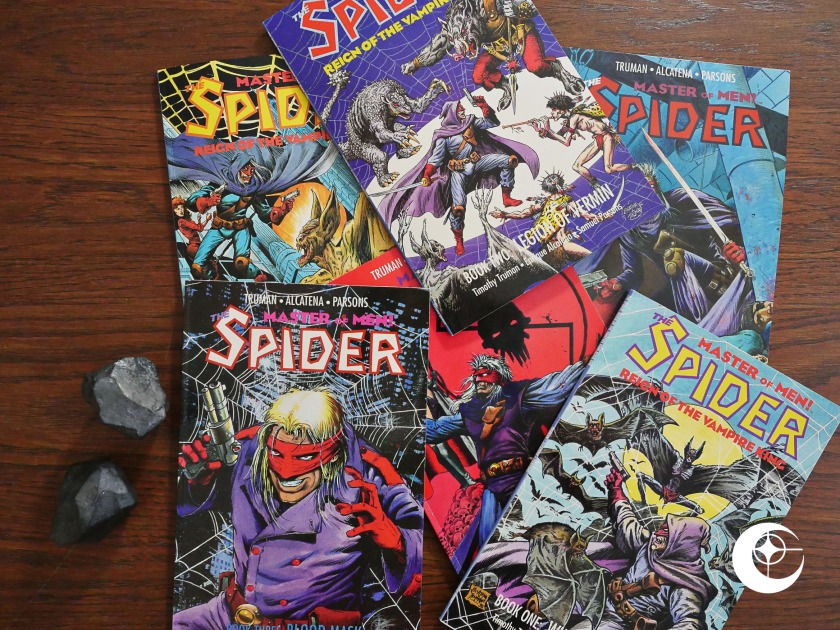 Hey! This is the first Timothy Truman comic I’ve read in a while. He was responsible for most of the best-selling Eclipse comics in their previous action/adventure monthly incarnation (i.e., 85-87-ish), starting with Scout and branching into a number of comics either written by him (or his partner in 4Winds, Chuck Dixon) or edited by him.

But Eclipse went in a different direction (focusing on graphic novels and painted adaptations of various things), so having him pop up again here is a bit of a surprise. But, of course, these aren’t published in normal “floppy” format, but instead as 48 page squarebound “prestige format” and selling for $6 a pop.

And the subject matter is certainly familiar for any Truman fan: He’s reviving an old vigilante character, which is something he’d been involved with several times before. This time it’s The Spider, a pulp character from the 30s, and for once, it’s not in the public domain.

“Developer, author and pencil illustrator.” I think that means that he wrote it and pencilled it.

Truman’s take on how to update it is fun, and he makes the concept explicit on every title page: “The 1990s… according to the 1930s.” So he’s imagining how somebody in the 30s would have written a pulp story set in the 90s.

Doing retro-futuristic comics is certainly nothing new, but these usually use the 50s as their starting point, so you get glistening rockets and really, really big cars.

The 90s seen from the 30s is a much danker affair. The Spider was apparently a very violent character originally, too, so updating him to a post-Dark Knight semi-insane vigilante isn’t as much of a stretch.

The teeth thing threw me at the start. I wondered whether he was deranged enough to file down his teeth for the look, but those are false teeth, it turns out. He pops them out to assume his secret identity.

Even if you may snicker at the excesses here (well, at least I do, paired with some eye rolling for the extra exercise), this is, as usual with Timothy Truman, a really well-told and somewhat exciting comic. There’s a ton of clichés, but Truman’s storytelling is so easy and confident that you (well, I) just roll with it. 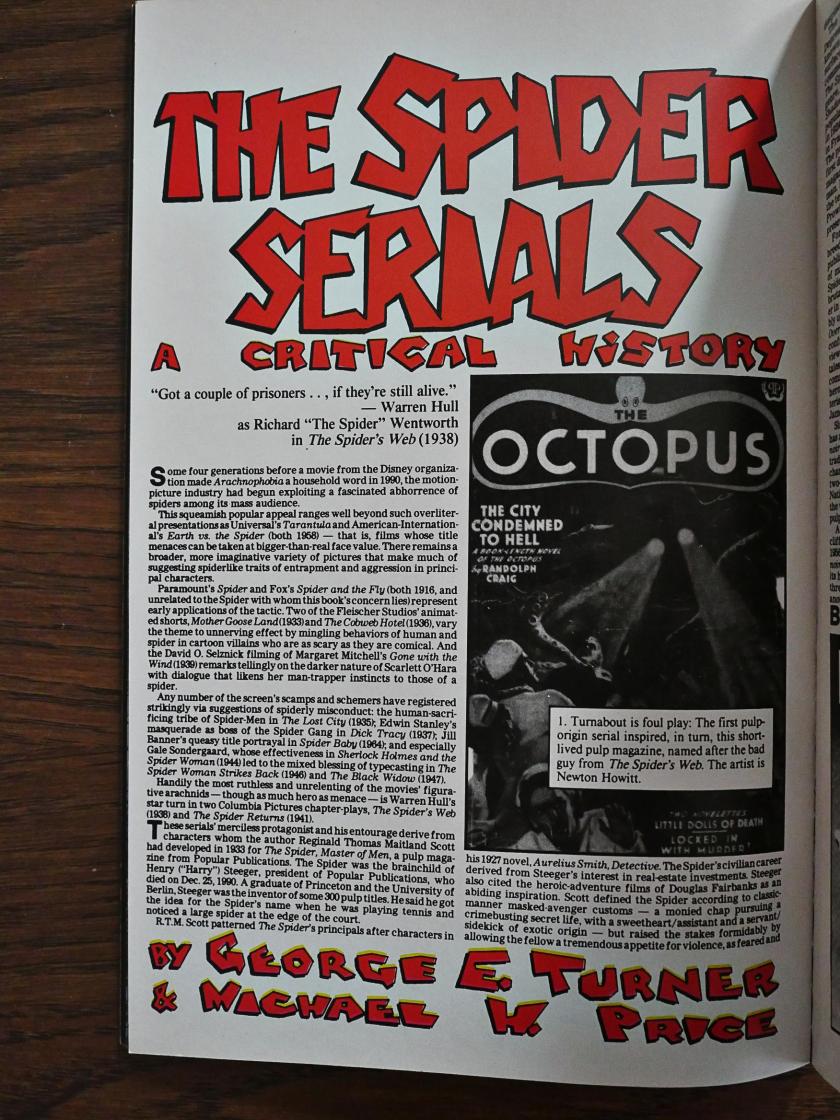 The authors of Forgotton Horrors drop by to explain about The Spider (in very small type over their allotted pages).

Still, even Truman can’t win all of them. Or is that perhaps a government-mandated line? All vigilante comics and movies has to have it in them to get in the right tax bracket? 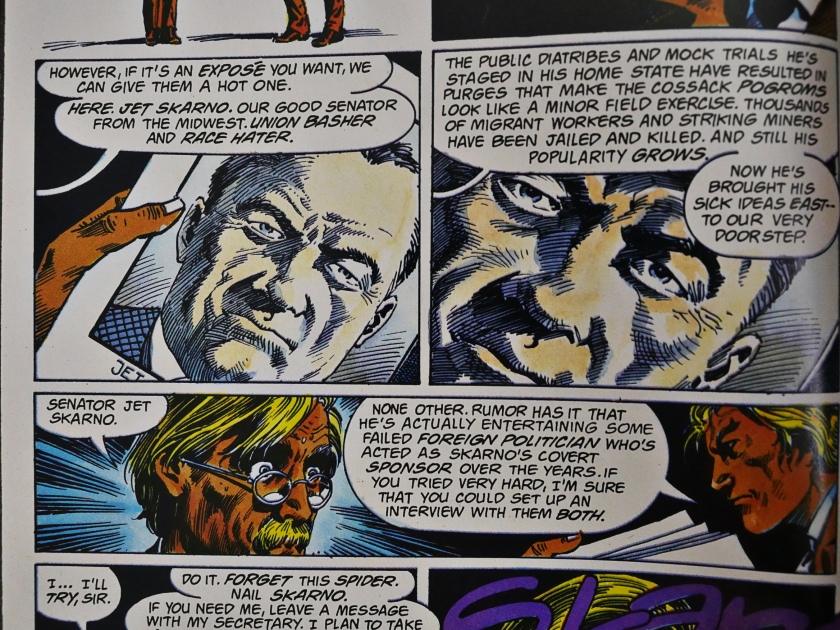 But Truman comes through on the villain front, first with a (presumably) Republican senator, and then *SPOILER WARNING FOR THE REST OF THE POST DON”T READ IF YOU”RE GOING TO READ THESE COMICS*

Yeah, that guy. In a pyjamas with swastikas. It’s dementedly fun.

A further article describes one of the Spider serials as “devoid of any shred of logic or sense”. Sounds fun.

Oh, there’s another one of those gummint-mandated lines…

The final issue of the first series has Truman himself describing how this thing came to be. He’d wanted to do it for a long time, even from the start of his career, but it never happened, for one reason or another, until now. And you can certainly see that Truman’s put a lot of work into the series: It’s a project he wanted to do, not an assignment.

And he says that’s it’s a “sleeper hit”. 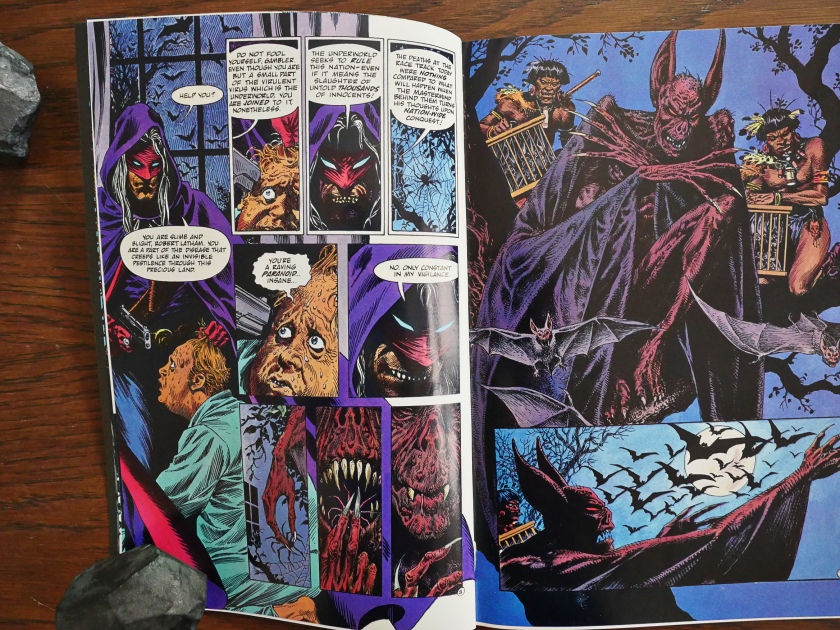 So there’s a new series, but this time he’s not doing the “pencil illustration” any more, but leaves all the artwork to Alcatena. I’ve never seen any of Alcatena’s work before (that I know of), so I don’t know whether this is the way he does his artwork otherwise, too, but it’s not a huge departure from the first series.

Perhaps it has a more… Warrenish feel to it? Or perhaps that’s just the monsters. 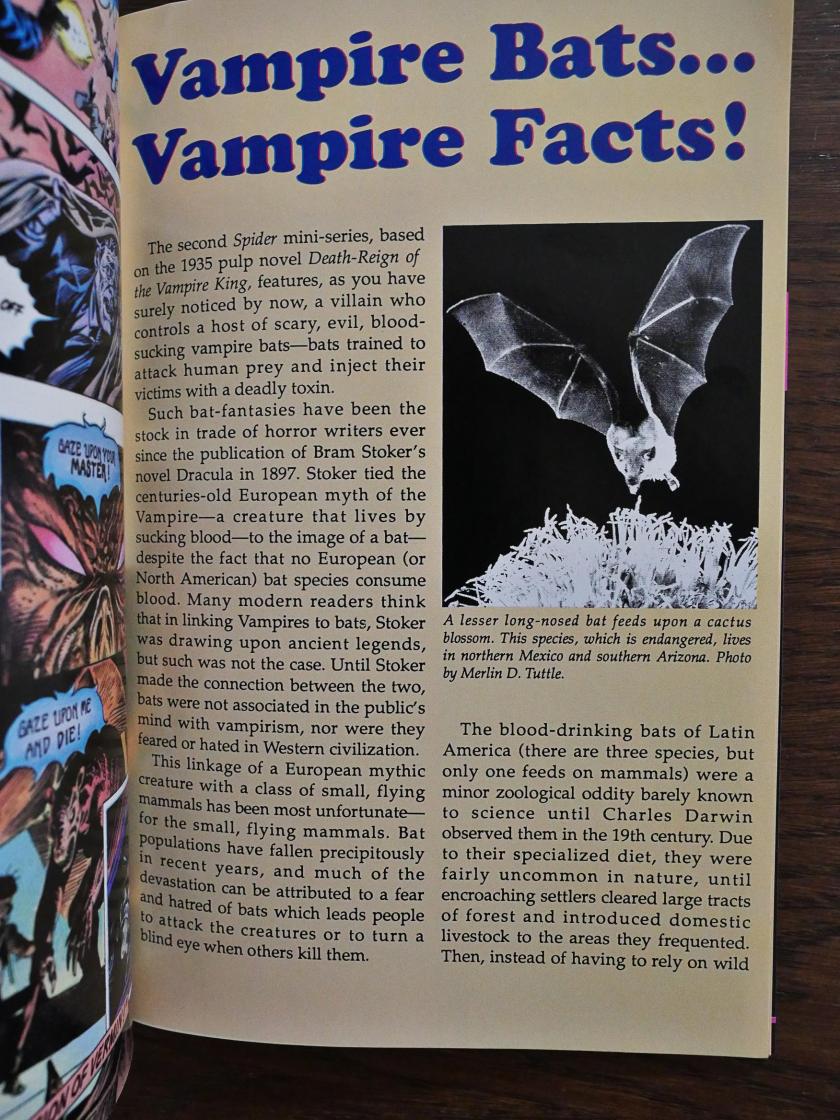 The main villain is a big vampire bat human, so we helpfully get three pages with facts about bats. 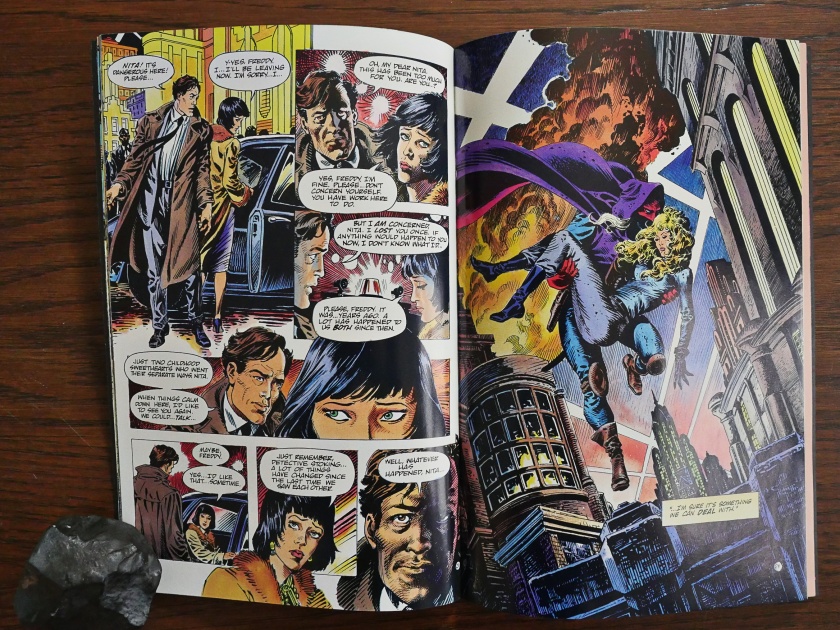 The second series is a bit… calmer? than the first one. We get more love interest intrigue (between several of the characters), but it’s still a good action film I mean comic book. I like the twist with several groups of bad guys fighting against each other, and The Spider fighting both of them.

Truman can’t help himself with the clichés: Here he fridges that woman in front of The Spider’s eyes. So much motivation! To break those ropes! 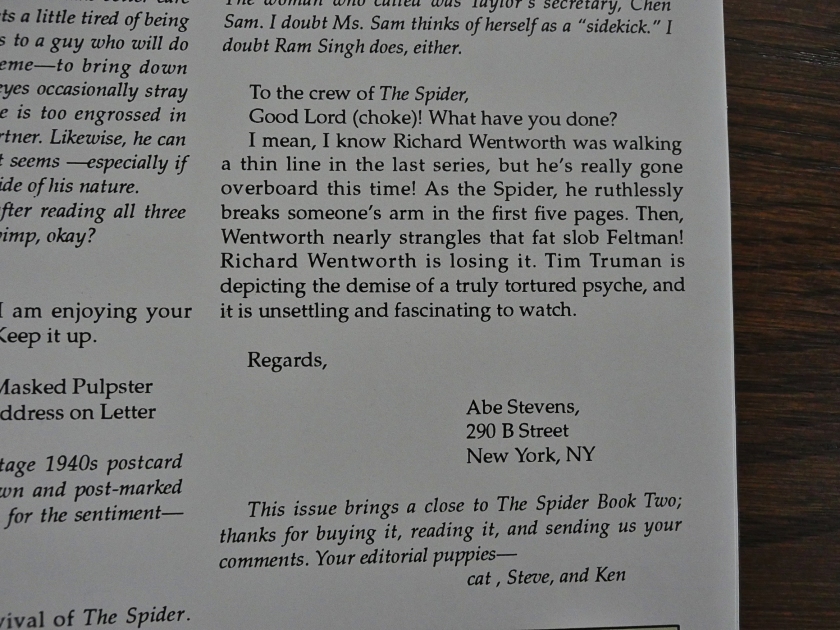 Wow! A letters page! It’s been a while since I’ve seen one of those, too, after Eclipse veered away from periodicals.

Huh. Apparently these have never been reprinted, and that’s surprising. For a pulp vigilante revival, these are eminently readable and entertaining. Virtually everything else ends up being reprinted, so why not these? Could it be a rights issue with Argosy who owns the er rights?

Let’s see what we can find… Oh, here’s a review:

Until that David Liss interpretation premieres, Tim Truman’s version of “The Spider,” from 20 years ago, remains the only prominent take on the character in the past two or three generations.

And it’s an insane, radically redesigned version that distills all of Tim Truman’s signature motifs into a three-issue package. I love it, of course.

It’s not a perfect package. The copyright belongs to Argosy Communications, and Truman apparently helped to bring the project to Eclipse, but whatever printing process the long-defunct California publisher used makes for a frequently blurry or off-register series of pages in “The Spider.” Sam Parsons provides garish colors, but they fit the content of the comic, except when the black holding lines smear into the colored edges and entire pages look printed through Vaseline. And though Quique Alcatena is a fine ink artist, he smoothes over many of Truman’s rougher, distinctive edges, and Tim Truman never looks as good as he does when he’s inking himself, whether it’s 1991 or today.

True, Truman’s artwork has a nice scratchy quality to it.

Hm… Nope, can’t find out anything about it. Somebody should consider collecting it.