This book is written by Timothy Truman (of Scout fame) and with artwork by John K Snyder III (of Fashion in Action slightly-less-fame). I’ve been positively surprised by the Truman comics I’ve had to read for this blog series, so I approached the little stack of comics without any trepidation.

This is part of Truman’s 4Winds initiative, which is a group of comics created by him and his friends, and published by Eclipse. This is the first #1 to have that on the credits page, I think. 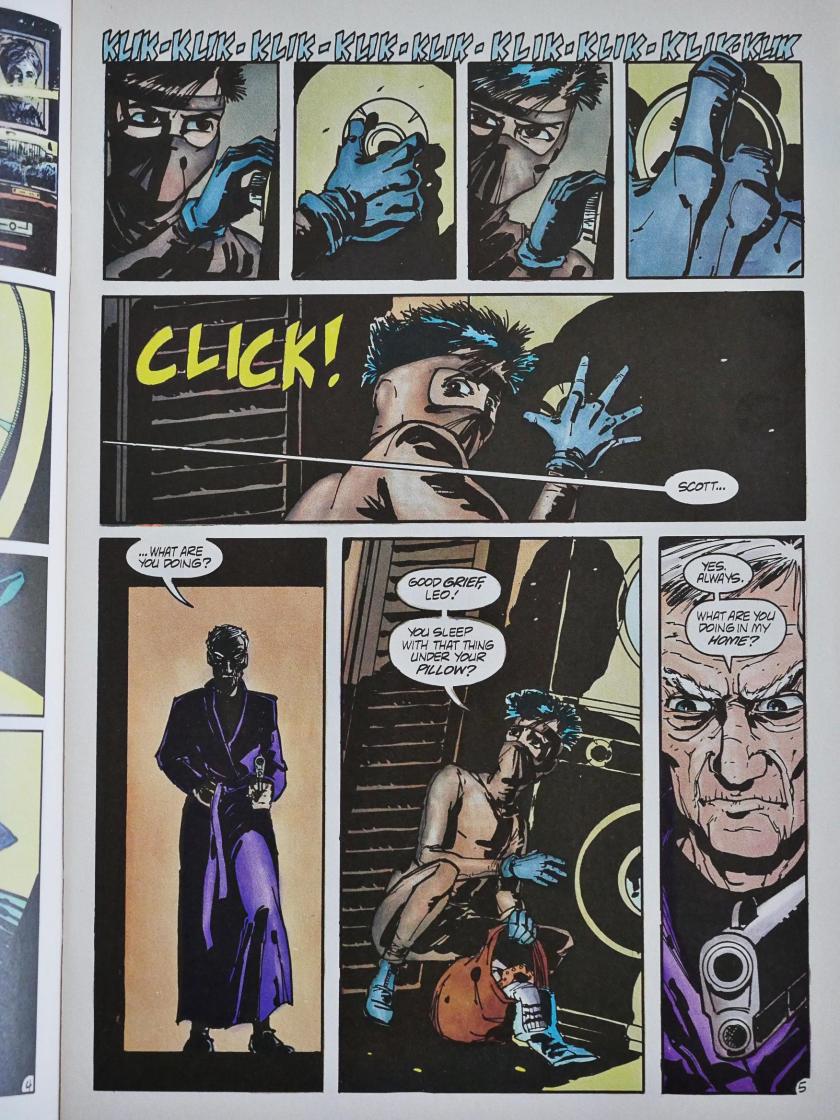 We start off with a ninja climbing up the face of a house, breaking in and then… 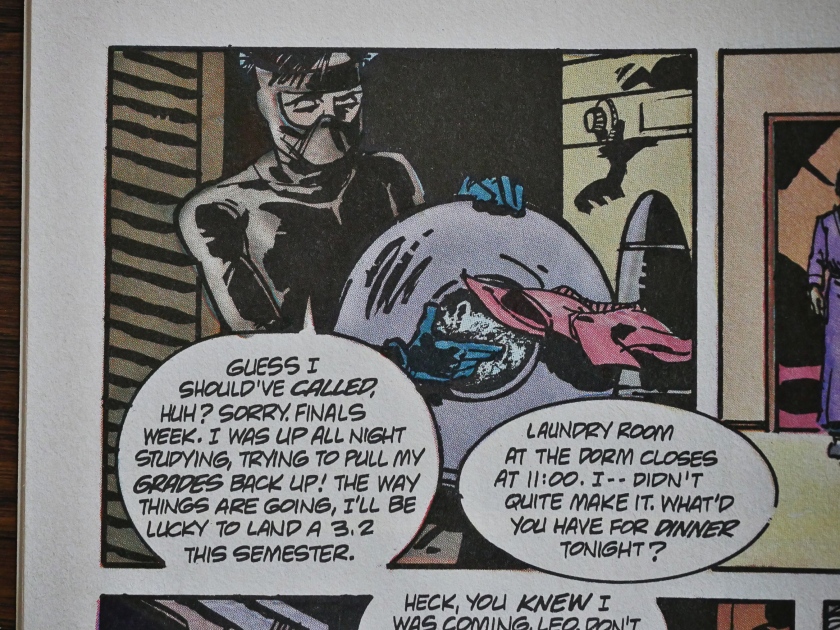 … he’s doing laundry! That’s the way to start a series off on a good foot. So this is going to be a humorous actions series a la Hotspur?

Then it turns heavier and it turns out the ninja lad is being groomed as the sidekick of an old 50s vigilante. So this is one of those deconstructed super-hero books that was all the rage in the mid-80s? Complete with homosexual panic (a la Rick Veitch with The One/Bratpack/etc)? 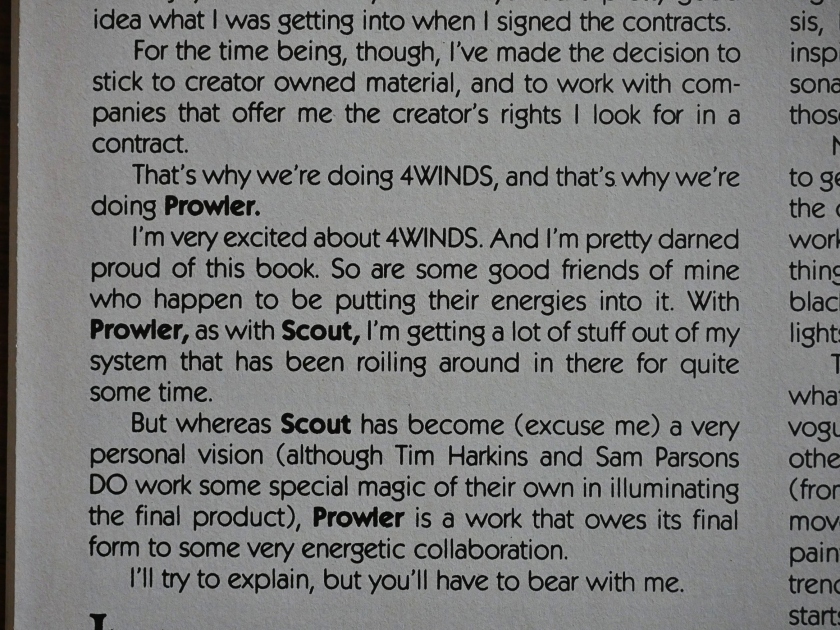 Truman explains how The Prowler was created as a collaboration between him and III. 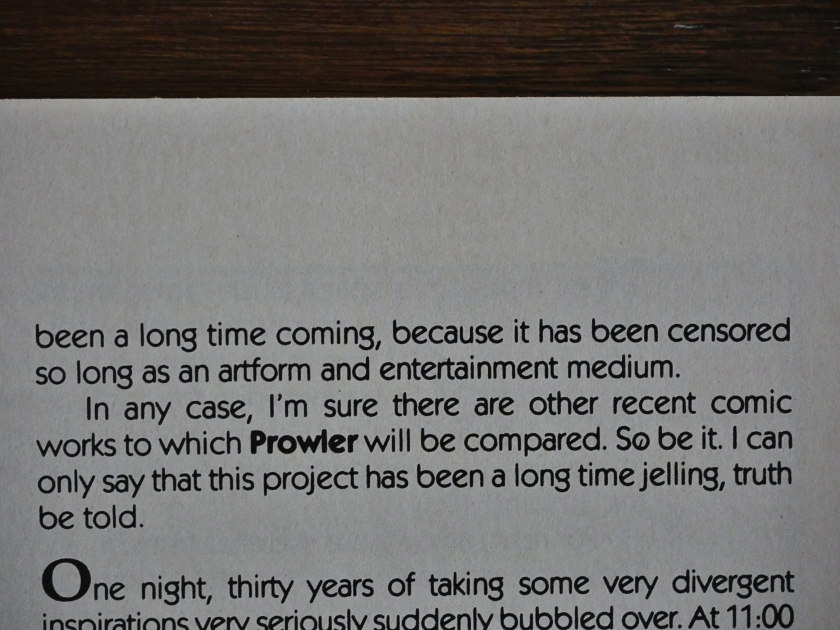 And lets us know that he’s aware that there are other recent comics that The Prowler may be compared to. Which I totally just did, so good call there.

But it never seems to really go anywhere interesting. Is the old guy a fascist bonkers guy (a la Dark Knight) or insane or what? The answer is “or what”, because while the book seems to hint at all these plots, you get the feeling that none of them have really been thought out: It’s just surface appropriated from books where the creators had put more thought into it.

The backup features detail the origin of The Prowler (drawn very stiffly by Graham Nolan and written very verbosely by Michael Price).

It’s not that these are completely without interest (how often is the 50s hero pro-union), but these are tedious to read. The artwork emulates 50s comics pretty well, except that it’s not really very good, is it? I found myself skipping these when I got to the sixth instalment or so.

Here’s the “house ad” for the 4Winds line. Nice.

Oh, yeah, in the book The Prowler was a real superhero in the 50s, but there was also a series of movies, so we get text pages detailing all this backstory. (*cough* Watchmen *cough*) The thing is… when you want to go all metafictional on the reader, you have to convince the reader that there’s something of interest to be had by participating in the game. There must be a sense of mystery that you want to tease out, and that reading supplemental text like this will bring depth to the project.

But I have absolutely zero (0) belief that there’s anything more here than meets the eye: It’s a genre exercise with a very, very, very small dusting of postmodernism on top, so while these pages may have been a lark to put together, they’re not much fun to read. 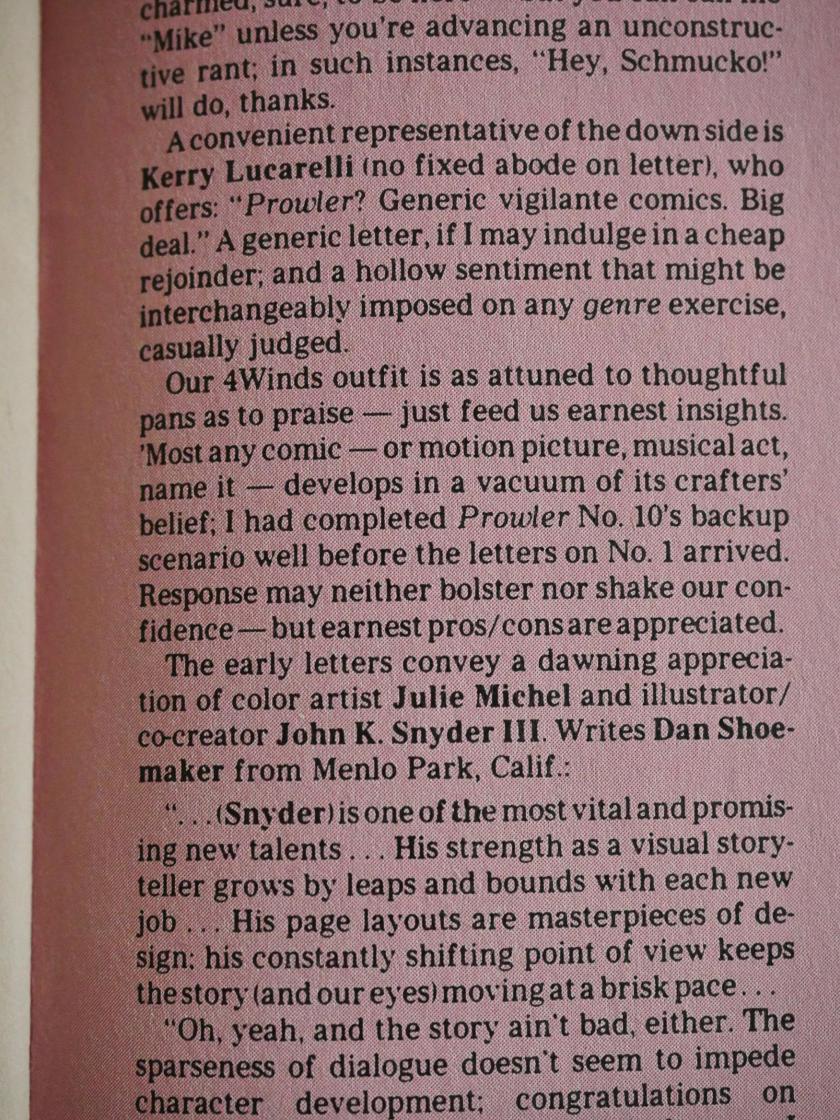 “Generic.” I think these letters pages were composed by Michael Price, and it’s hard to tell what he’s trying to do. Is he making fun of pompous asses, playing a high-falutin’ schtick, or is that just the way he writes?

And then The Prowler series is over without any warning, but we then get an Airboy crossover that pretty much continues where the series left off. It’s weird that they didn’t mention this in the last Prowler issue, instead of talking about backup features for issue 10…

For a couple of months, Eclipse would indicate the various “lines” they were publishing. So A for Airboy, S for Scout and 4W for 4Winds. Let’s see what’s on this week…

So 4 4W, 2 S (+ Scout) and 2 A (+ Airboy). Eclipse stopped doing this pretty swiftly, so I guess people might just have found it confusing…

The old vigilante hatches a nefarious plan to bring his protege into contact with Airboy! For reasons!

And it involves him… sending him out for laundry in a part of town where Airboy drives past just at the same time and a woman is kidnapped around the corner. That is pretty fiendish plotting, I must say. 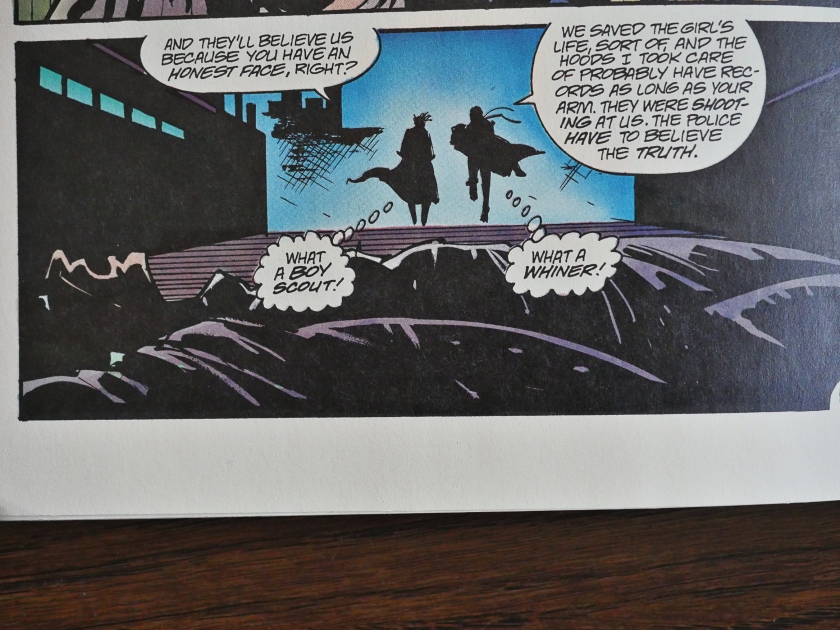 As crossovers go, it’s more meaningful than most.

And then there’s another four-part series, Revenge of the Prowler. No explanation in the chatty editorial pages, but my eyes are glazing over at this point.

It turns out that Ninja Boy Wonder has been totally traumatised by his experience in the first four issues, so he’s now doing better artwork (which is painted by the colourist Julie Michel). Yes, he’s an art student.

Did I mention that Price’s writing style on the letters pages can be a bit on the grating side? It helps if you read them in the Simpsons’ Comic Book Guy’s voice, I find.

Ah, torture. The tool of all heroes to come. So gritty.

In the second issue we get a flexidisc. Truman did this with Scout, too, where we got two songs from his country band. Here the first side is a cod-40s orchestral number, and the B side is Truman doing a very electronic motion picture thing, perhaps influenced by John Carpenter. Both are better than the Scout flexi. 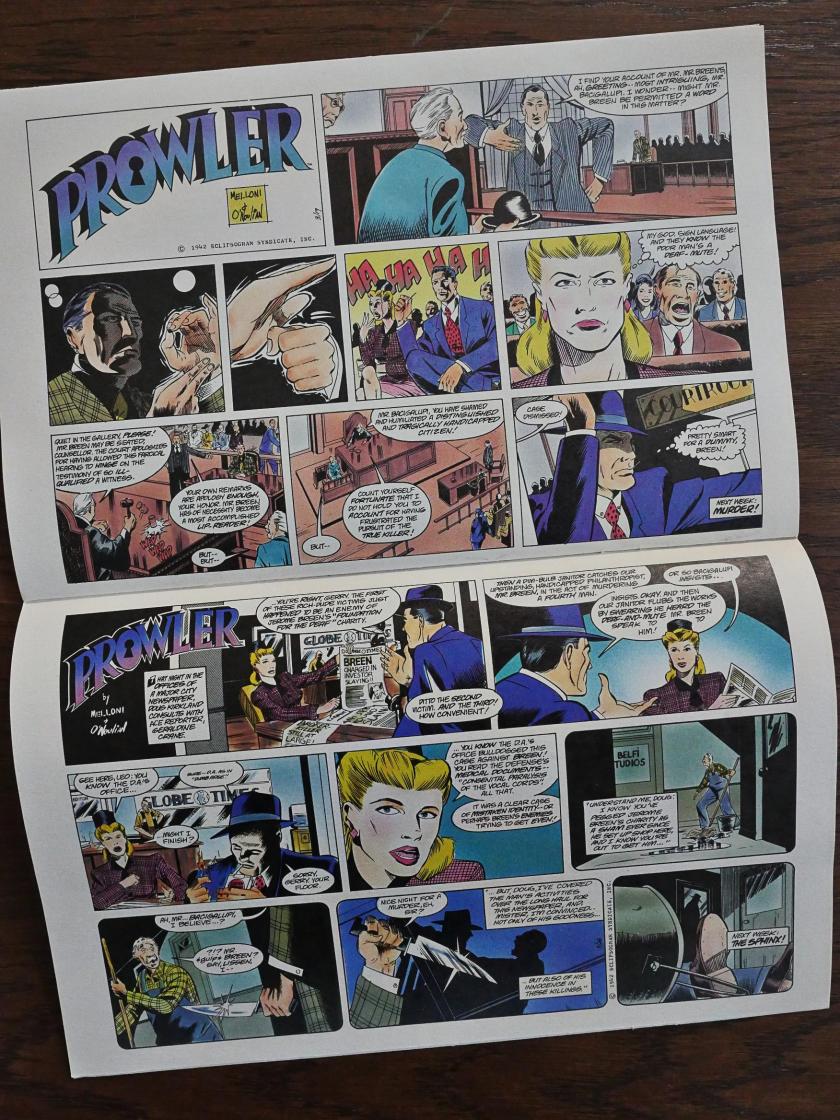 They still haven’t given up on the meta stuff, so we get an excerpt from the 50s Sunday strip version of The Prowler. It’s a good idea. The problem is that it’s tedious as fuck.

Hey! I want a helicopter hat! That’s what it is, right?

Hm. Have I neglected to talk about Snyder’s artwork completely in my general annoyance over this comic? It’s improved a lot over the short time since his Fashion in Action stuff. Panel-to-panel it’s very readable, and his more chunky inks and black spotting (perhaps influenced by Frank Miller and maybe a smidgen of Howard Chaykin) is very pleasant to look at. 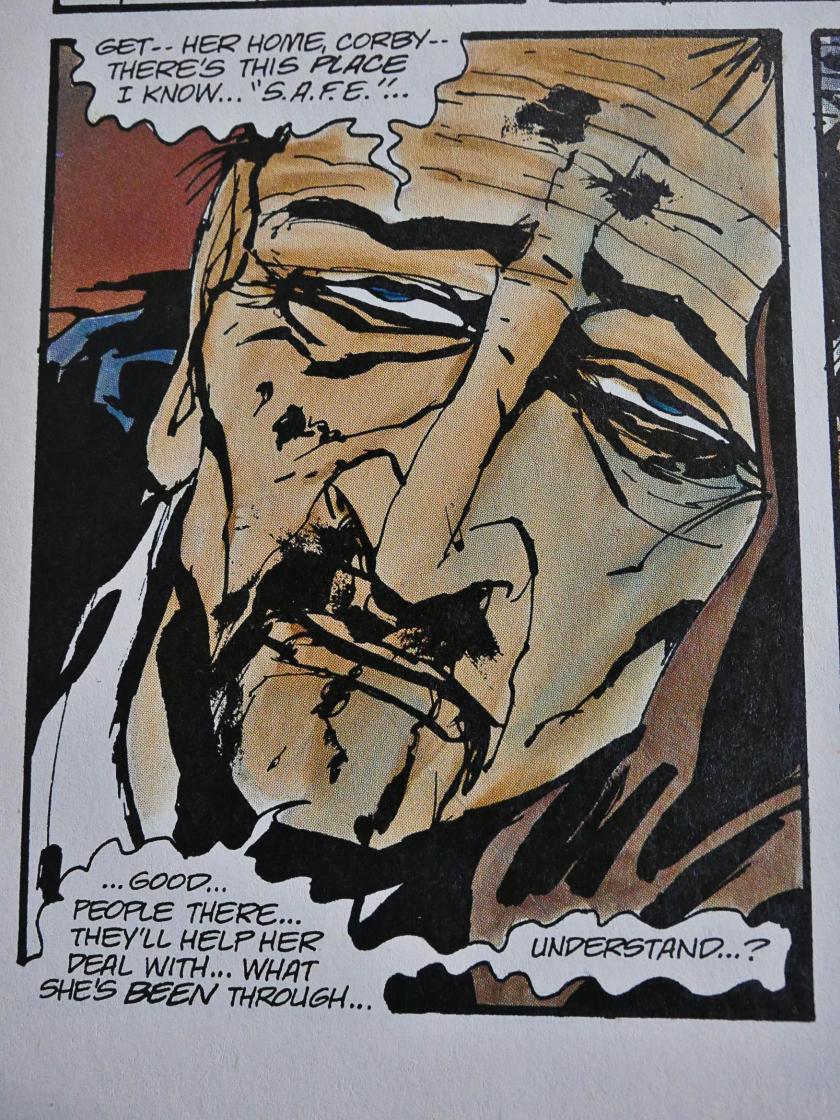 And is that also a bit of Keith Giffen? Actually, what it reminds me most of is Jeff Lemire, who started a couple of decades later. Was Lemire a III fan? 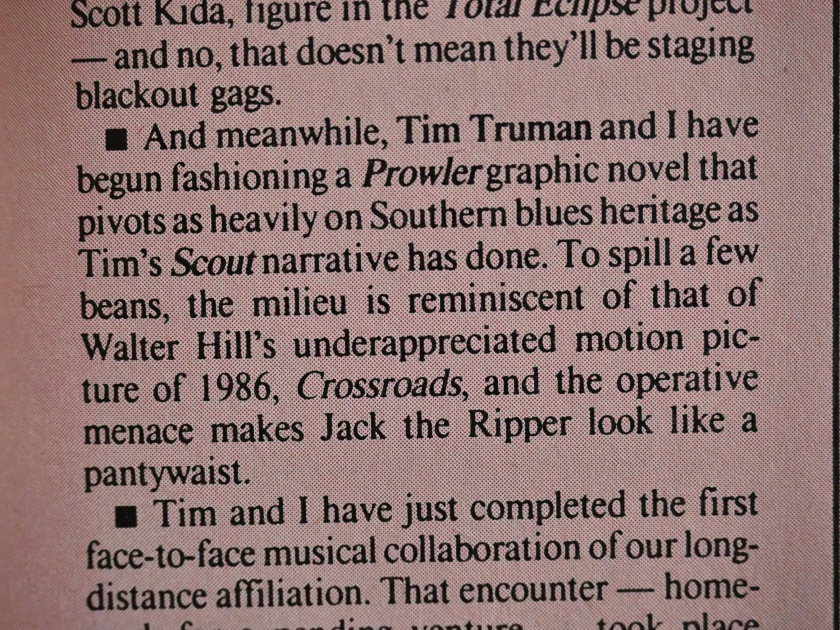 In the final issue, we’re told that Truman is working on a Prowler graphic novel, but that didn’t happen.

We also get some very non-realistic-looking dailies. 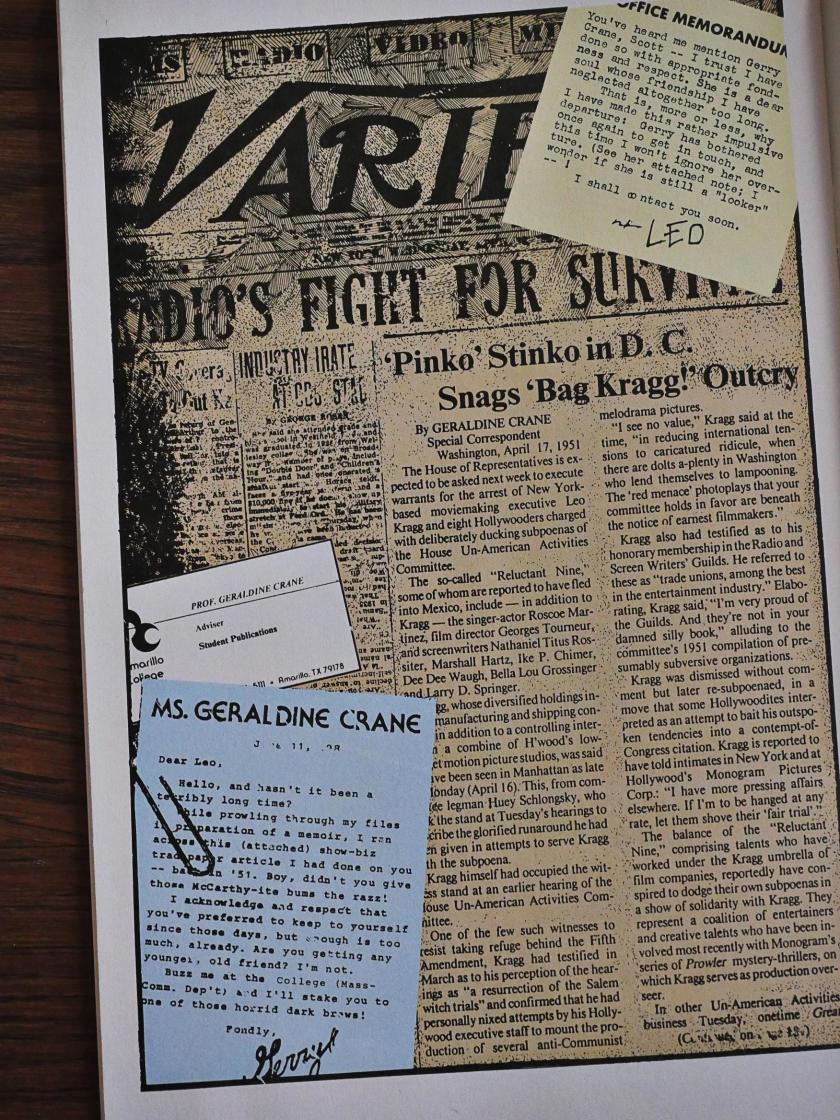 And more news items. I sure do hope these were fun to make, because they bring nothing to the reading experience. And I hope at least somebody had fun during the Prowler experience.

And last but least, we have Prowler in White Zombie, which is an adaptation of a 50s film he starred in. (Wink wink nudge nudge.) It’s written by Price and drawn by Gerald Forton with Graham Nolan.

Forton is a good illustrator, and makes the evil guy look his part.

Of all the Price-written bits, this book was the hardest to parse. Is it meant to be a farce? That inset panel where the character looks at the audience after The Prowler said something particularly stupid is funny, but is that really what’s going on? 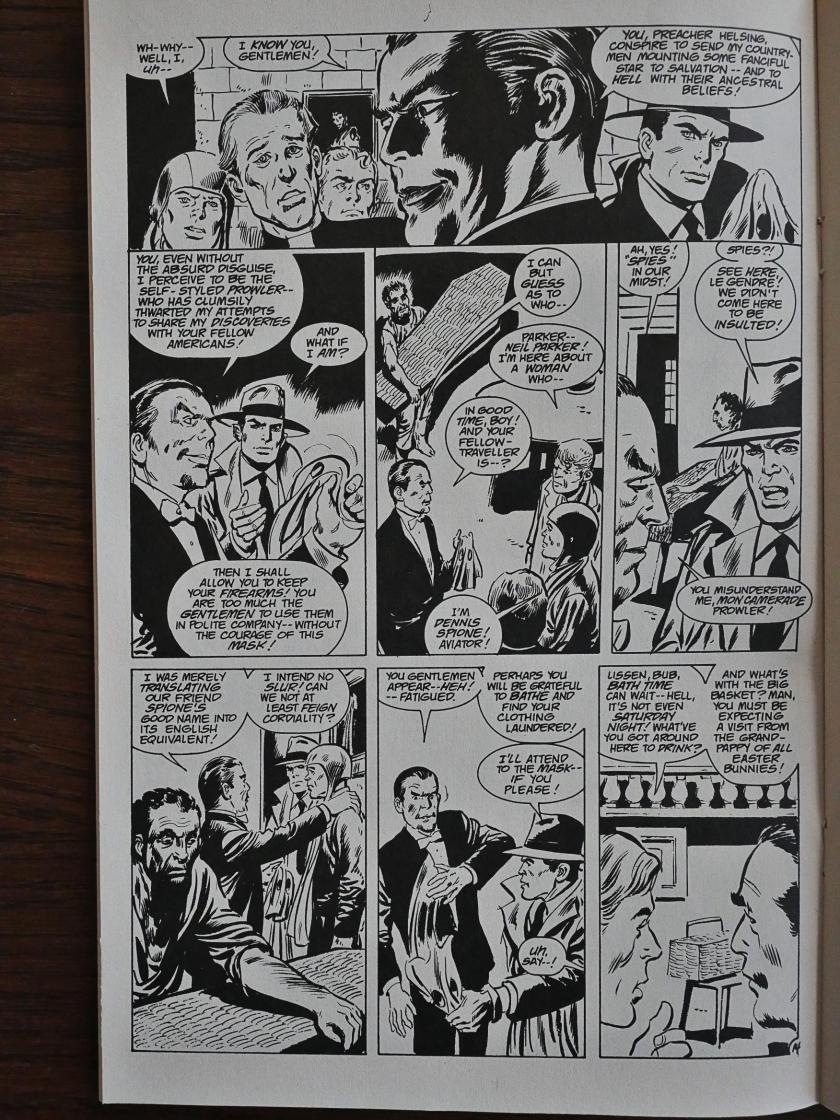 Because there’s so little fun in the rest of the book. There’s pages and pages of this, and that repartee just isn’t very witty.

And that’s it! There were no more Prowler books, and now I’m not looking forward to reading the remaining 4Winds books.

CreateSpace Independent Publishing Platform published an 180 page collection of some of this stuff under the name Leo Kragg: Prowler in 2013. I don’t know what’s included, but perhaps… the stuff from the eight “main” books?