I remember being very taken by this series as a teenager. It was a glimpse into a world that was otherwise difficult to access: The American self-published micro press.

From the title, one might surmise that this is basically a reprint of mini-comics, and the first piece (by Stengl Dooley) certainly looks that way: It’s eight panels long, and looks like it might have its origin in a twice-folded piece of paper.

But it’s a rarity: Most of these pieces look way too cluttered to have been blown up from smaller sizes, so I guess the “mini” in “mini comics” mostly refers to the size of the print run, not the size of the pages.

Each issue is edited by a different person, and Larry Marder went for an all-humour issue, and featured a few people I’ve never heard of before, like Allen Varney above.

He also contributes a couple of pages himself, like this anti-Beanworld page.

And speaking of beans, I can never resist a Mike Bannon page. It’s the nail clippers that lands the absurdity.

So the material here is both old and new, specially made for this series.

Matt Feazell edits the second issue, and while there’s funny stuff in here, he also mixes it up with some tense pieces, like this gripping one from David Steinlicht.

It also has, perhaps, with this Mike Erniest piece, the most basic strip in the series. 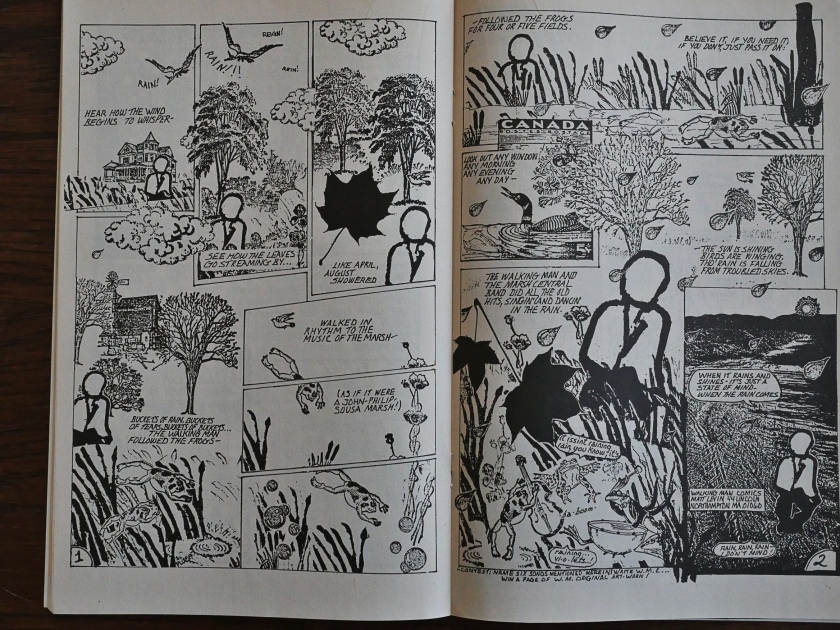 This is perhaps my favourite strip in the entire series, and it’s by Matt Levin and is part of his Walking Man series. I don’t actually remember reading any of these comics, but turning to this spread gave me a strong sense of deja vu, so I think it’s likely something that I’ve looked at a lot at the time. 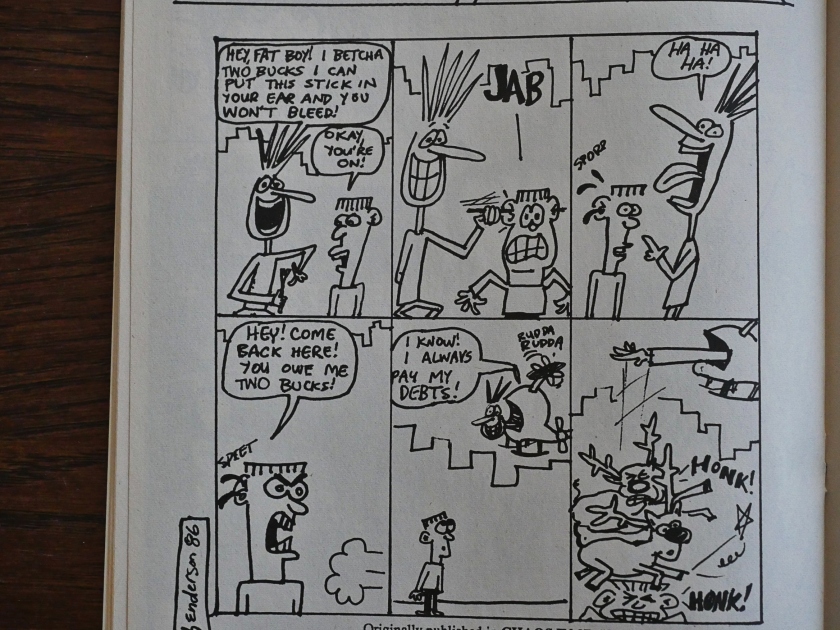 Early Sam Henderson. Nice to see that he hasn’t changed over the years… 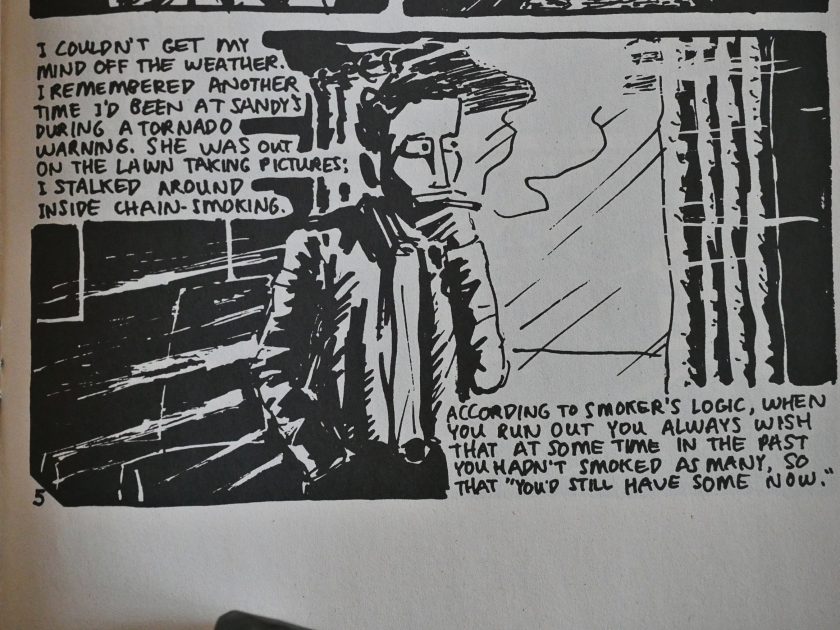 Tornado Alley by somebody called Dissmeyer is also really good.

The indicia to the third issue says that Matt Feazell is the editor of that issue to? Did they change their minds?

But the feel of the third issue is wildly at odds with the other issues. This could have been an issue of a punk/underground anthology instead, like mid-period Weirdo. Bill McKearn’s contribution is genuinely unnerving, and I love that 70s underground art style.

Ron Hauge’s single panel cartoons seem like something out of an alternative weekly.

And so does Kenny Be’s pages.

The only woman to appear in any of these issues is Teresa Henry, which is yet another break from the other issues. And, indeed, it turns out that the indicia is wrong, and Jay Kennedy is really the editor here. It is the strongest issue, perhaps, but also slightly disappointing in how, uhm, professional it is. 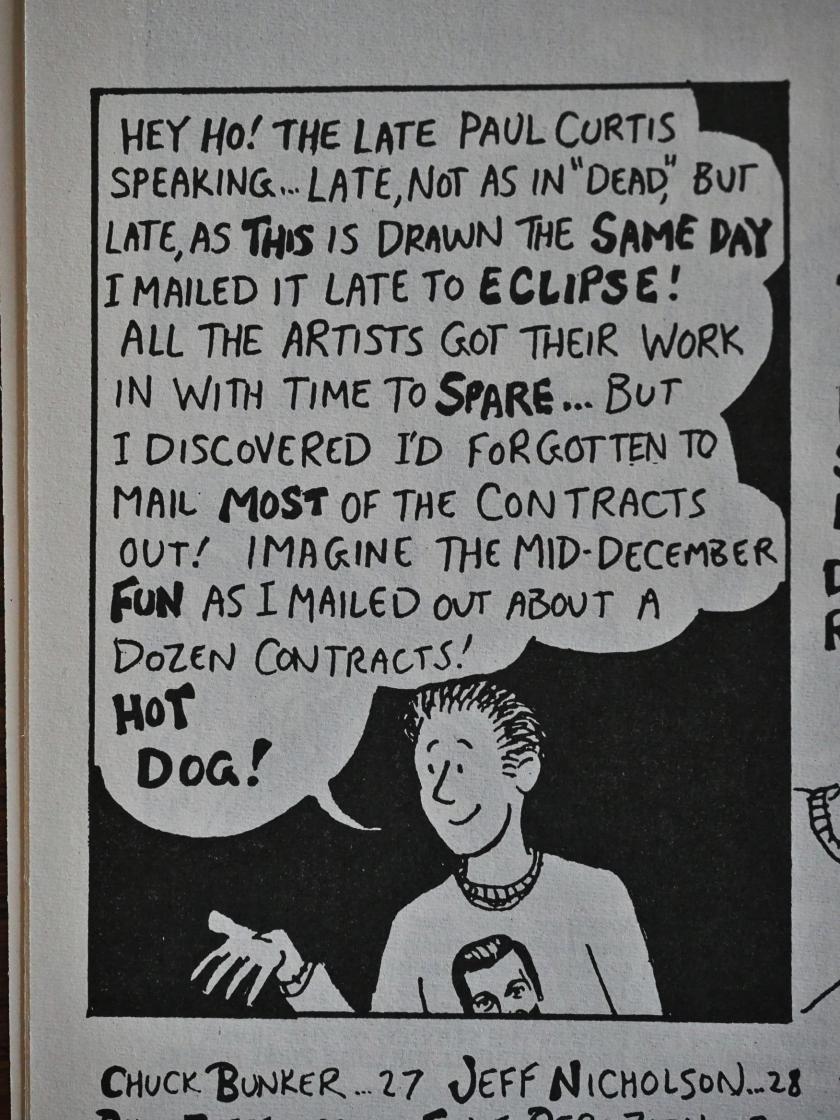 The final issue makes up for that in spades. Paul Curtis edits, and he’s most of the contributors are solidly from the mini-comics milieu. 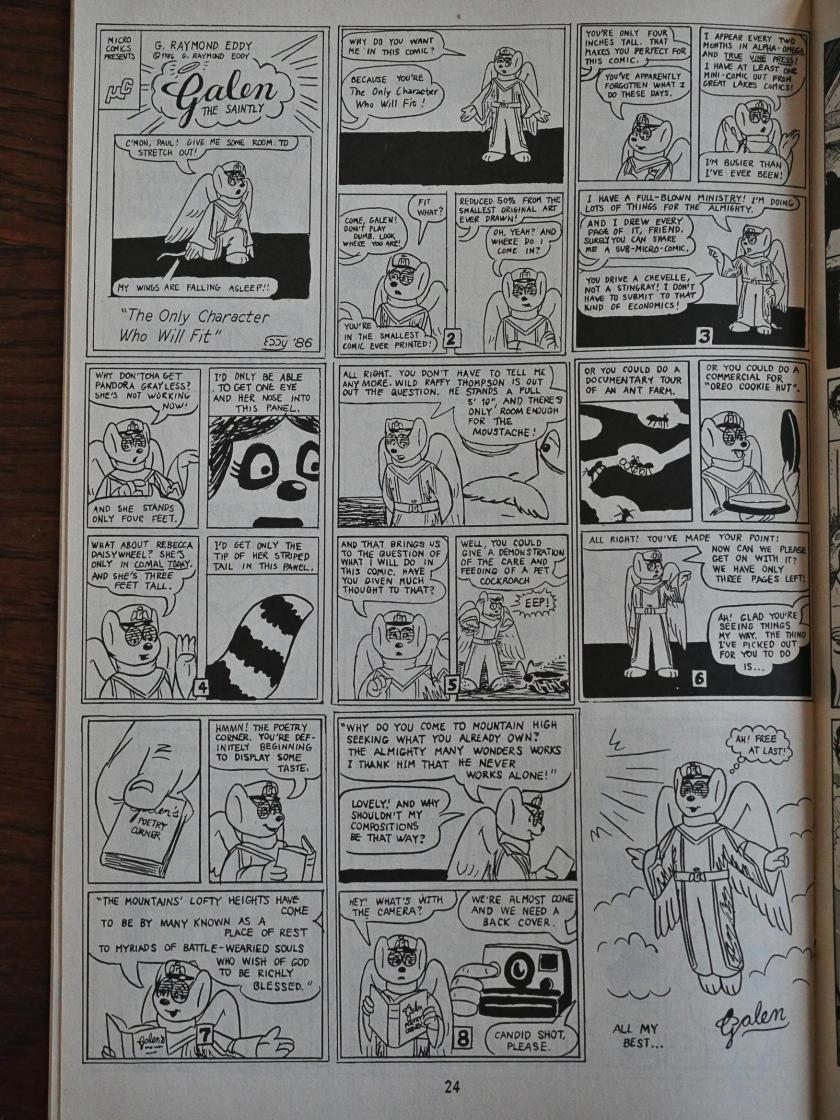 Not only mini, but micro, as he’s gotten most of the contributors to do these nine-pages-on-a-single-page pieces. It’s a jam-packed issue, but… not with the most interesting contributors.

It’s not all micro comics, though. Eric Larsen does a very early Savage Dragon thing… but… eh.

So there you go; two really good issues (the Feazell and Kennedy ones), one pretty good (Marder) and one that’s interesting if not aesthetically a triumph (Curtis).

There ought to have been more issues, I think, but the black and white boom had gone bust by this time, and Eclipse could no longer publish anything as long as it’s in black and white and make money.

My favourite comics critic from when I was a teeneager, R. Fiore, writes in Comics Journal 113:

This is something that was needed, but an attempt this gutless only keeps a more serious effort from happening. The humor is on the level of that fictional gag strip Chester Gould used to sneak into Dick Tracy, and so is the artwork. Iconoclasm, experimentation, and rage are notable for their absence. Jay Kennedy is editing the third issue, so it ought to improve. And then relapse.

And gives it a “one old lady” rating, which is the next to lowest one. For those not familiar with the scale, this rating means “Toilet paper”. In the same Funnybook Roulette he gave the 1986 Sears Christmas Catalog two and a half old ladies, which means “A little more than mediocre but a little less than good.”